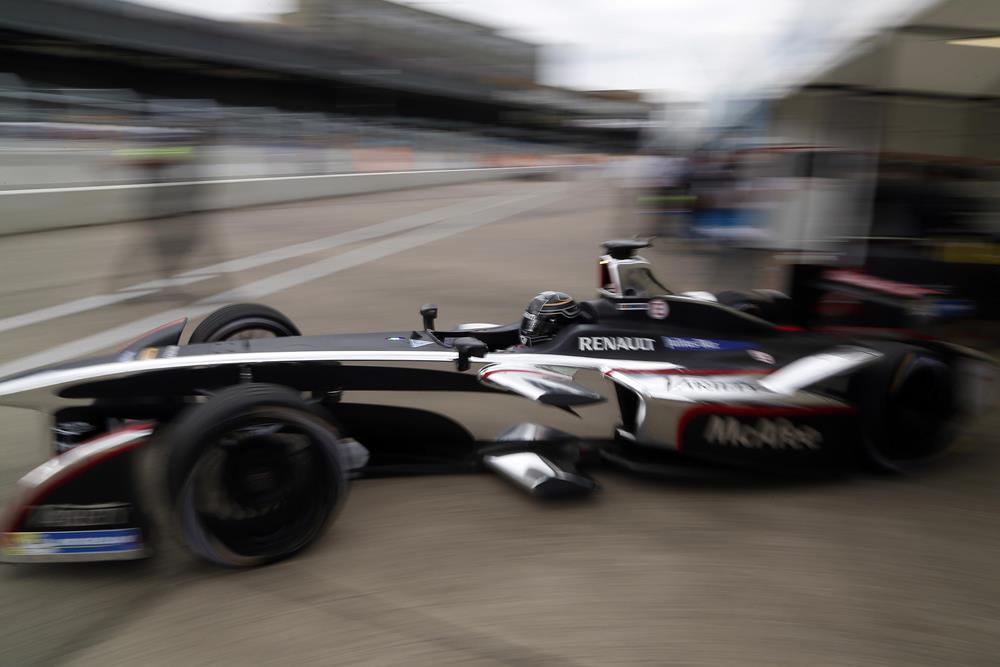 The Audi Sport ABT team was found in post-race scrutineering to have modified the front wing fairings of the Brazilian’s car, which infringed strict rules regarding the many spec parts on this season’s Spark-Renault cars. The team insisted the changes were necessary repairs and weren’t intended to gain an advantage (and probably didn’t provide one), but waived their right to appeal the decision to prevent continued uncertainty over the result.

It’s very hard on di Grassi, who after capitalising on polesitter Jarno Trulli’s (Trulli GP) mistake at turn 3 was untouchable all race, winning by a margin similar to Sam Bird’s (Virgin Racing) in Putrajaya. It was exactly the performance he needed to stake his claim to the championship, but instead of taking a 17-point lead he now trails closest rivals Nelson Piquet Jr (China Racing) and Sébastien Buemi (e-Dams) in 3rd.

He’s still definitely in touch, just ten points behind with three races left, and in a robust post-race tweet said: “They are trying to make me win this Championship in the hard mode. Dont worry, we will be back to kick some Piquet and Buemi ass ON TRACK...” But when we look back on this season, this might be the moment when di Grassi lost grip on the championship having led it after every round except Miami.

Even if di Grassi's domination meant the first ever race on the defunct Tempelhof Airport apron wasn’t a classic, there were still plenty of stories and surprises, many starting in qualifying. It seems every time I preview a race weekend, someone I don’t mention suddenly comes good, and thus Trulli as mentioned took a shock pole, his first since 2009 in F1 with Toyota. Equally surprising was how mediocre Piquet Jr and Bird’s pace was, starting only 13th and 15th respectively.

Alas, fortunes switched around in the race. Trulli’s power consumption problems on the first half meant he fell right to the back, retiring just before the end. At least teammate Vitantonio Liuzzi came 9th, and with Trulli's pole they earned Trulli GP’s first points since Punta del Este in December.

China Racing notably proved better at energy management than everyone else, which meant Piquet Jr and Charles Pic able to run an extra lap before pitting, and with the extra power available Piquet Jr completed a recovery to 4th, damage limitation which later became the championship lead with di Grassi’s exclusion, even if he could have done without Buemi finishing ahead of him in 2nd.

Bird got up to 8th, but now looks out of the championship race at 35 points off the top, and with d’Ambrosio overtaking him, unless Moscow and London’s races swing fully in his favour.

German Nick Heidfeld’s (Venturi) 5th at his home race was his best finish yet; even if a podium eluded him, he’ll be thankful for any kind of result given the luck he’s had this season. Compatriot Daniel Abt (Audi Sport ABT)’s own dismal run continued, languishing in 14th after spinning on the first lap.

As for the track? Berlin’s concrete-surfaced airport circuit was a different proposition from the series' usual street tracks. The drivers compared its generous width to Monaco all weekend, and indeed the wide corner entries and several big braking points allowed for lots of different lines and outbraking manoeuvres. The racing seen throughout the field, especially between Buemi and Heidfeld, showed how unnecessary FanBoost is to generate interest

But we must finish by talking about winner d’Ambrosio and his team Dragon Racing; the American squad’s form has been easy to miss, consistently scoring points without podiums, but now they sit 2nd behind e-Dams thanks to Loïc Duval also coming 3rd. The team aced the pitstop phase, crucially allowing d’Ambrosio to leapfrog Buemi to finish 2nd on the road.

Even with that, d’Ambrosio finally showed what he’s promised all season, moving to within a point of Nicolas Prost and championship dark-horse status should the Belgian keep it up. He certainly looks more convincing than Prost does right now, the Frenchman just holding off António Félix da Costa (Amlin Aguri) for 10th in another so-so race.

Andretti Autosport and Mahindra were strangely even more anonymous, the latter never even troubling the top 10 all weekend. Jean-Éric Vergne was able to get 7th, but teammate Scott Speed was stuck in 13th.

So now it’s just three races left, with three contenders within ten points of each other. Let’s not roll out conspiracy theories, but di Grassi’s exclusion leaves the championship finely poised for Moscow in two weeks’ time. Piquet Jr, Buemi and di Grassi will be fighting for it the rest of the way, and based on d’Ambrosio’s latest performance he might just force himself into the scrap.

What did you think of the race? Did you have a favourite moment? Where would you rank this circuit in relation to the others so far? Comment below!

Watch highlights of the race in RaceDepartment’s video gallery here.

I thought the race was entertaining. Disappointed for di Grassi (but rules are rules) but the race behind him was pretty good. The track wasn't bad either, plenty of room (arguably except the final sector) and it actually looked unique unlike most of the other tracks so far. Piquet Jr seems to have the energy control figured out better than others, it is certainly picking him up some places. Looking forward to the next one.
You must log in or register to reply here.
Share:
Facebook Twitter Reddit Pinterest Tumblr WhatsApp telegram Email Link
28 comments
Automobilista 2 | October Development Roadmap
17 comments
F1 | Pierre Gasly to Remain at AlphaTauri for 2021
30 comments
WRC 9 | Update Deployed, Finland Stages Released
11 comments
An Englishman, A South African And Some Race Cars... Wild Times In Virtual Racing
50 comments
Community Question | Light or Dark?