Formula E's going from Punta del Este to Buenos Aires this Saturday, from South America’s so-called Monte Carlo to its Paris. Argentina’s capital, historic port city and cultural centre hosts the fourth race as the championship contenders have begun to emerge. e-Dams’ Sébastien Buemi finally made good on his potential last time in Uruguay but Andretti Autosport debutant Jean-Eric Vergne ran him ragged towards the end, and both return for this waterfront dash, with Audi Sport ABT’s Lucas di Grassi leading it by 18 points over Buemi and Virgin’s Sam Bird.

When looking at the calendar before the season started, the street circuit in Puerto Madero looked appealingly simple compared to the possibly stop-start layouts of Beijing and Punta del Este. I think London’s still has the most promise, but Buenos Aires’ is also a park circuit, with 12 turns and 1.5 miles circling (plus briefly entering) Micaela Bastisdas Park. Looking at the video sim above, it’ll be a short lap with slow corners, particularly the turn 5 hairpin, and faster stretches at the start and end. The fact that the start and finish line are at different points on track is curious, probably to compensate for how early the pit entry is; it’s sharing the entry into turns 8 and 9, and could be awkward if some drivers slow down for the pits but others just behind stay out. Most positive is the fewer ninety-degree corners and chicanes relative to the previous tracks, though it should be said Punta del Este had plenty of those. It therefore didn’t look as promising, but still provided the best race so far. So at the risk of repeating myself, it’s a season filled with new discoveries, and we’ll have to wait and see. For what it’s worth, staying near the South American coast means conditions will be similarly hot and humid, but without sand being blown onto the track like in Uruguay! The redevelopment of Puerto Madero, the most extensive ever seen in Buenos Aires, means a backdrop filled by modern high-rise apartment buildings which should look good on television and the wider roads at even the lap’s slowest points might make overtaking even easier, and the previous races featured plenty of battling.

Beyond this weekend’s race, there’s been big news in Formula E’s world. Biggest has been series boss Alejandro Agag’s bullishness regarding the manufacturers waiting to join for the 2015-16 season, and the apparent diversity of interest is what excites (Agag was speaking to Autosport):

"They are a mix of car manufacturers and others are technology companies - which is a really different option for us, so ones that produce batteries, electric motors or even a full powertrain - and we will find out who has been successful in the next week…The selected manufacturers could be in a number from anything from six to eight.”

Right now Formula E is effectively a spec series, with everyone running the same chassis, batteries and tyres. It’s sensibly conservative for young technology with a limited range, but staying spec also means the technology won’t improve. If the series wants to grow and gain more acceptance in motorsport circles, it especially needs to get past having to change cars mid-race ASAP (apart from another suggestion I’ve made a few times already). Thankfully, the series’ five-year plan prioritizes increases in allowed battery power and capacity over downforce, to make sure the teams’ efforts are spent on the unique technology rather than on more typical motorsport aspects. And honestly, with the tyres as narrow and treaded as they are, plus the temporary street track surfaces, it’s hard to imagine F1-level grip ever being possible anyway. Other news is that racedays have a support race at last; the Formula E School Series is being run by the same trust which runs the Greenpower competitions in the UK, and will run on a similar concept with school teams producing and racing their cars on the same tracks as the Formula Es. Monaco is excepted from this – the principality likely hasn’t got enough schools within its 2 square kilometres to make it worthwhile. Speaking of which, preparations have already begun for the Monte Carlo ePrix in May, and could be running an effectively new layout for about the first time ever.

While another category begins, for the drivers in Formula E itself this weekend is probably when the series’ sheer novelty starts becoming less important than the title fight itself. The teams tested at Punta del Este on the Sunday after the race, and Stephane Sarrazin was fastest in his Venturi. The veteran Frenchman finally showed competitive pace and fight in that race, but overdid his defensive driving and needs a solid run soon. Formula E’s current Mr. Consistent Lucas di Grassi has stood on the podium in all three races so far, and you wouldn’t bet against him continuing that run. But the series’ first steps have predictably been unpredictable, and di Grassi is arguably due his bad luck as his main rivals have already experienced. Buemi finally had a weekend without it in Punta del Este, and should be strong hereafter, backed up by teammate Nicolas Prost. Sam Bird meanwhile was unmatched in Malaysia but never looked comfortable in Uruguay, qualifying near the back and then crashing out early, but expect the determined Briton to bounce back. Vergne was of course the big revelation, taking pole and nearly the win on his first go before retiring on the penultimate lap. Having since joined Ferrari in a test reserve role, things are going Vergne’s way after being dropped by Toro Rosso; look to see him at the front again on Saturday. In Andretti’s ever-changing lineup, he’ll be joined by Indycar winner Marco Andretti, son of team boss Michael and grandson of Mario, replacing Franck Montagny as news of his positive drugs test has halted his racing activities for now. Ho-Pin Tung at least is back for China Racing alongside the impressive Nelson Piquet Jr. This means that barring a very late twist, former British F3 driver Esteban Guerrieri won’t be driving in his home race despite testing for the team in Uruguay. Will Sarrazin’s teammate Nick Heidfeld, along with Mahindra drivers Bruno Senna and Karun Chandhok, finally get their break like Buemi did last month?

Qualifying is at 3pm UTC this Saturday, which you can follow here on RaceDepartment through Formula E’s live online stream. It’s also available for the race or you can watch ITV4’s coverage, starting at 6pm with the race at 7pm. If the Schools series also takes your fancy, it’s on the stream at 5:10pm.

Will you be watching the ePrix on Saturday? Do you like the look of the circuit? Who do you think will win? Comment below!
Last edited: Jan 9, 2015
Click to expand...

Premium
I am enjoying F-E so far, but the tracks are the worst part for me. I know why they chose them, I get it, but when they race they all look the same. I'd prefer to see F-E racing on some proper circuits as well, like Donington, where they are based anyway. I can see potential crash sites at a number of places this weekend... turn 1, turn 5, turn 7, the chicane. Still looking forward to it, but I just feel it could be that bit better with better tracks (I could say the same about some F1 track choices...)

Nox said:
I am enjoying F-E so far, but the tracks are the worst part for me. I know why they chose them, I get it, but when they race they all look the same. I'd prefer to see F-E racing on some proper circuits as well, like Donington, where they are based anyway. I can see potential crash sites at a number of places this weekend... turn 1, turn 5, turn 7, the chicane. Still looking forward to it, but I just feel it could be that bit better with better tracks (I could say the same about some F1 track choices...)
Click to expand...

Yep as this is a preview season for the competition and for the technology, they want to do it in the city because of electric/eco cars, to spread the awareness for non-petrol cars also being as good/better than petrol cars in a city. But the environmental impact is still yet to be clarified, because of electric cars rare earth material components or hazardous which can increase acid rains more than petrol cars, and then the impact from the power source which feed the cars. But I believe this is no more than one of the steps in transport evolution.

The racing has gradually been getting better with every round, which only benefits the series going forward. Sure, these cars don't have blistering cornering speed or 200+mph top end speeds, but the on-track battles are fantastic.

Premium
Best bit about this track? Only one crappy chicane, all the rest looks half-decent. There even appears to be more than one proper corners!

While it still exists, may as well use it

Only 3 points for a driver who should have won 2 of the races
Click to expand...

Sorry, but he should have won one race. Yesterday he made a mistake on his own and paid for it

Just watched it on youtube. More action than in half of last years F1 season
The track was by far the best so far. The first few tracks weren't that great, but this one was really good for overtaking. Was a bit like BTCC at the end

Frederic Schornstein said:
Just watched it on youtube. More action than in half of last years F1 season
The track was by far the best so far. The first few tracks weren't that great, but this one was really good for overtaking. Was a bit like BTCC at the end
Click to expand...

Seriously, that was an awesome race with all the attrition and close racing. Call me insane, but I actually think the Uruguay track was the best so far. I'm really getting into this series, shame it's nearly two whole months until the next race

Premium
Nick Heidfeld's car for the next race in Miami 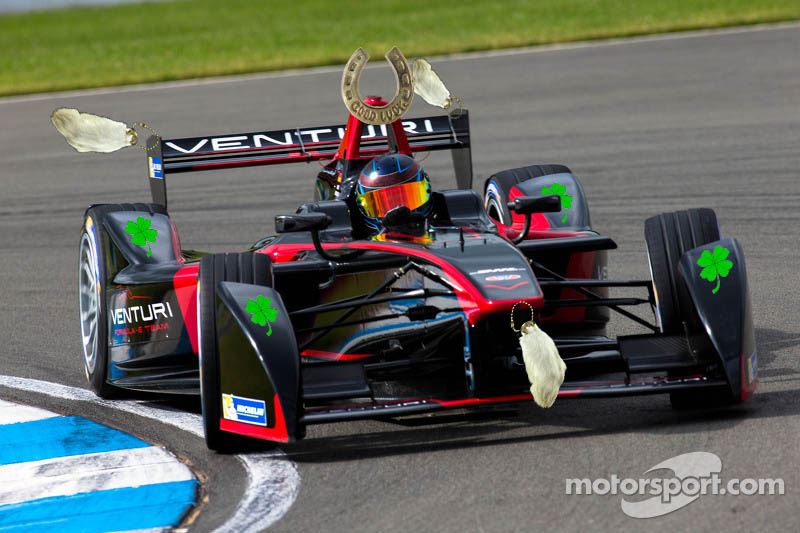 BTW what happened to Jarno Trulli?

This was the first time I watched the Formula E. I enjoyed it more than I thought, it's far more exciting than the current F1 IMHO! Fair play to Senna getting 5th (I think it was 5th) from last place. Impressive performance with or without Fan Boost.

Premium
Very good racing. Anything can happen. I kinda like the fragile suspension pieces, it certainly punishes imprecision!

Ryan Soucy said:
Very good racing. Anything can happen. I kinda like the fragile suspension pieces, it certainly punishes imprecision!
Click to expand...

As fun as it is to see extra pressure being piled on the drivers, I think the suspension should be stronger. Remember, the drivers are still human, therefore they are always likely to make mistakes!

Dan Allen said:
BUT WAIT! I've had a brainwave! If they're planning to have driverless road cars within the next 20 years, why not have driverless race cars too? It'll be like a real life Scalextric set!
Click to expand...

Awesome race, best yet of the season... The track was great with the challenging chicane and hairpin bend. That gave some real close and good racing. Thumbs up!

Richard Eriksson said:
Awesome race, best yet of the season... The track was great with the challenging chicane and hairpin bend. That gave some real close and good racing. Thumbs up!
Click to expand...

How many accidents/close calls happened at that final chicane?
You must log in or register to reply here.