I think the biggest lesson from Formula E’s second round in Putrajaya is that at such an early stage in this season and for the category as a whole, predicting form is a little futile. Of the ten teams on the grid, of course it had to be two of the three I didn’t mention in my preview that really starred in qualifying and the race.

Dragon Racing’s Oriol Servia took pole after e-Dams’ Nicolas Prost set the fastest time, but took his ten-place penalty to start 11th. It makes sense Servia would do well; the Putrajaya street circuit felt very similar to any number of street circuits that Servia and the Dragon team would have run on in Indycar. It’s one a lot of the grid admitted had much more character than Beijing; wide enough for overtaking, but tight and bumpy enough to present a real challenge (the turn 10 hairpin was tight, but the feared gridlock didn’t happen). For a temporary circuit, the facilities were very impressive, especially compared to Beijing’s marquees. I’ll admit I was expecting a few more spectators, considering how Formula E is trying to make the series accessible; this is perhaps an unfair expectation of something so new, and there were people stood watching at most points on the track, but the grandstands on the main straight did look quite sparse. It’s a shame, only because the race itself was action-packed, if scrappy at times.

Come the race, poleman Servia could only finish 7th after lots of battling, including being crucially passed following a safety car period by emphatic race winner Sam Bird. Regularly two seconds a lap faster than anyone else in the early stages, the British Virgin Racing driver can be said to have managed the car and circuit better than anyone else, and was my driver of the day. But his dominant pace may have been belied by other drivers’ need to race through from the back. Lucas Di Grassi and Sebastien Buemi’s charges from 18th and 19th to 2nd and 3rd were the race’s other big story. Both avoided trouble and had excellent pace, and if e-Dams and Audi Sport ABT hadn’t suffered issues in qualifying we might have seen a huge battle for the lead. But it’s a big recovery from Di Grassi, who currently leads the standings by three points from Bird, and Buemi needed that result after all of his misfortune. Impressive as they’ve all been, I’m not marking anyone as title contenders just yet; only Bird and Di Grassi have two great results so far, and with races as dramatic as they are there’s got to be more twists coming in an exclusively street-circuit calendar.

Sticking to this race, the drivers’ concerns about the new lack of a formation lap, particularly relating to the lack of brake heat, were not unfounded, but as Dario Franchitti pointed out in commentary, it’s the same for everyone else. And this time only Audi Sport ABT’s Daniel Abt had problems getting away, falling to the back and being forced into an awkward strategy of doing well over half the race in one of his allocated cars. Driving on cruise control relative to the leaders, Abt could do nothing to defend, but deserved 10th and a point for his troubles.

Despite being wider than Beijing, Putrajaya saw a litany of on-track clashes; Amlin Aguri’s Katherine Legge slid into Trulli GP driver Michela Cerruti on the first lap, needed a new front wing and ran mostly by herself afterwards, that anonymity mirrored by Antonio Felix da Costa’s run to 8th. Although Cerruti’s teammate Jarno Trulli was too presumptuous in defending against China Racing’s Nelson Piquet towards turn 1 on lap 23, with eventually both afternoons ruined, qualifying 4th and running 2nd will be a needed boost, and suggests potential going forward. Franck Montagny’s adventurousness in the Andretti Autosport car was fun to watch, but attempting to repeat his millimeter-close move on Charles Pic from Beijing on Nick Heidfeld was overambitious, and sent the German into the wall at turn 5. Heidfeld really could do with less people taking him out of races; Montagny’s teammate Matty Brabham had already bashed into him at the hairpin! Most surprising to me has been Venturi’s Stephane Sarrazin, a much proven driver who’s been worryingly anonymous for two races in a row. By contrast, Bruno Senna’s drive in the Mahindra was probably the most dramatic, hitting the wall and warping his steering, able not only to keep going but threaten Buemi towards the end for 3rd until sliding into the wall approaching turn 10 on the very last lap. Zero points so far doesn’t reflect his pace, but he needs some better luck soon.

Outside of the racing? Positives and negatives. We were promised less background music this time and got it: the “EJ”’s tunes only showed up during replays and pitstops. And FanBoost is so far proving more of a curse to the drivers voted for it; Senna’s had it both times, crashed both times; Legge’s also had it twice and hasn’t scored a point; Di Grassi didn’t use it in Beijing to preserve his power, and Heidfeld likely got the sympathy vote after his acrobatics, then got punted off again.

But apart from the insurmountable FanBoost, my biggest problem so far with Formula E’s format is the need to change cars, not just in terms of showing up the technology’s limitations, but in the very long minimum pitstop time required for a driver to change cars. The order changes so drastically, with drivers removed from track for minutes, meaning the race becomes difficult to follow. Case in point, did anyone notice Jerome d’Ambrosio in the other Dragon car progress from 20th to 5th, itself a remarkable comeback? It was lost in the shuffle, and I hope that doesn’t become the case for any racing not in the top three. And what is it with national anthems being cut short on the podium? It happened last time out to di Grassi, and this time Bird was given half of “God Save the Queen” before it faded out, came back and then just stopped.

Yet I’m complaining about small things – Formula E is giving us new circuits and locations all over the world, and a wealth of single-seater experience gave us an even better race second time around. I’ll take that for all the issues it’s got (FanBoost’s still got to go, sorry). And for those of you who could bear the two month wait, you’ve only got three weeks until Round 3, the Punta del Este ePrix in Uruguay on December 13th.

What did you make of the race? Do you have a driver of the day? Did you vote in FanBoost? Comment below!
Click to expand...

They should stop this masquerade honestly ...

I cannot think of anything more boring than watching electric cars race.

If you can't think of it, then you should see more, think less. It was an enjoyable race. 31 laps is fast, doesn't take up much time.

Much better than the first race, and it's a lot of fun watching these guys (and gals) with big names go at it in sprint races on street circuits. Both Bird and Abt had mega races, definitely looking forward to the next race.
R

I watched the event but honestly I was not excited or really that interested, the cars did not sound like race cars. I like the new ideas like fan power which provides something along the line of a 40HP boost for a few seconds and the car swaps are interesting until you watch a driver struggle to get into another chassis. I don't really think all electric cars are fun to watch. It's funny the broadcast says "Electric cars for racing in big cities where emissions are a concern".... WHAT! There is so much pollution in a big city that an race over the weekend will literally be "a breath of fresh air" compared to all the pollution normally in the air of a heavily populated area. Like the idea of innovative racing but Formula E just is not entertaining. Its rather boring.

Easy solution for you lot: Don't watch it and leave this thread. Thank you.

It's a very intersting racing form. And rhe format so far is good (apart from the crazy fanboost nonsense).

The lack of noise doesn't bother me, as i like any interstng racing from a sporting perspective. It is good competition, and that's all i need.

On the track is where the action is, not reving an engine at the sidelines

But yeah, it is really odd sounding with that insane gear box whine being made very clear

I thoroughly enjoyed the race. Spec cars, tight street circuits, short races and some of the best drivers in the world, recipe for awesomeness. The sound is of little concern to me, racing is competition, not a spectacle of loud sounds. I love the fact that they have a BMW i8 as the safety car

This series will be awesome in a few years when there are multiple manufacturers pushing the limit of the technology. I also hope they stop with fan boost and the nonsense of swapping cars in a pit stop.

As far as I know the teams will develop their own cars starting next season, so I hope they find a way to simply change the batteries instead of the whole car

Saw my first race in this series on TV a few days ago.
Don't understand how fan boost works.
Maybe they could strap on a few speakers to the cars to give em some sound?

Human sounds.
Amazed by the people involved in this series.
Even Michael Andretti who was my hero in Indycar.
Brabham also. 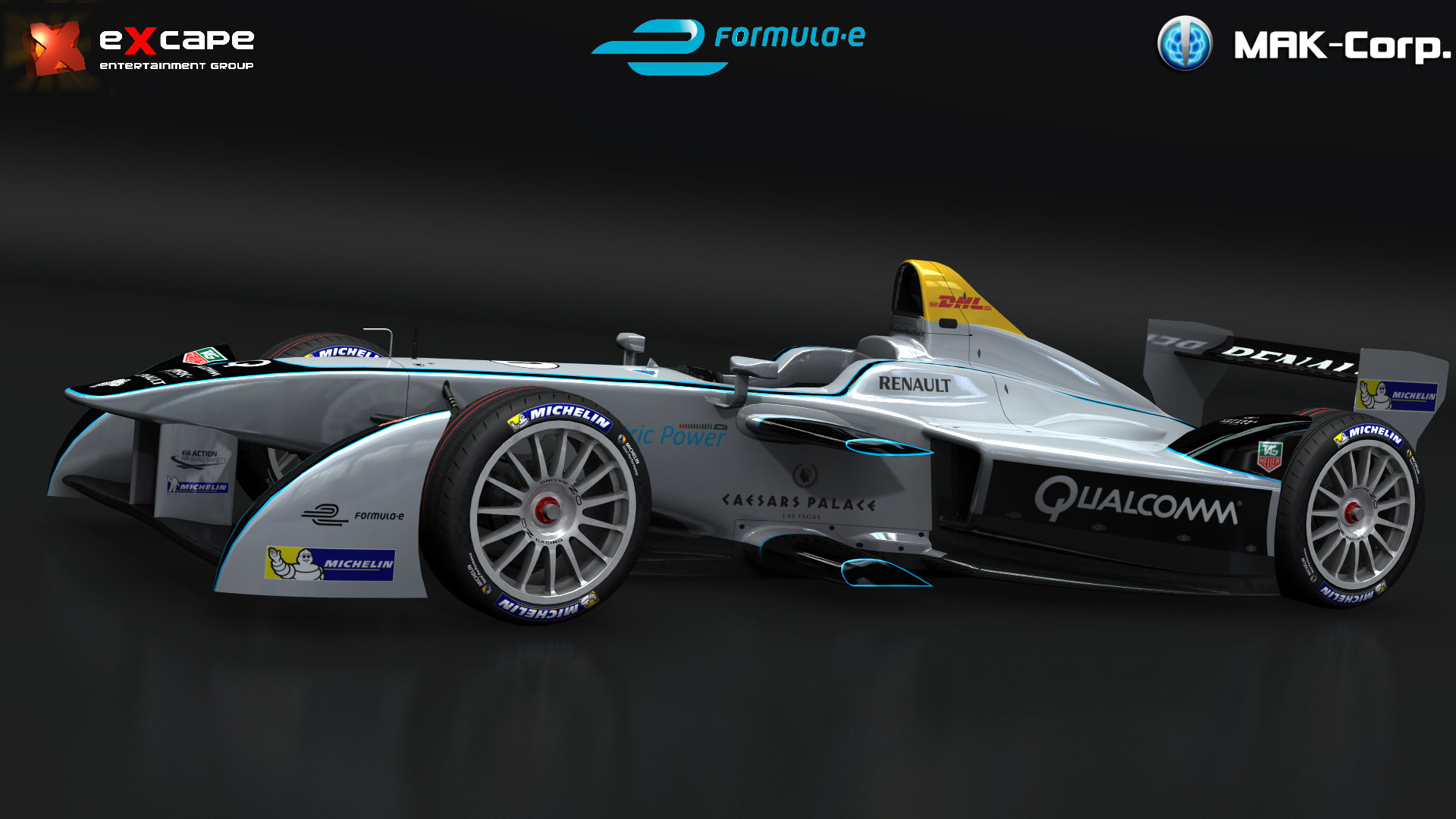 Ravanor said:
It's funny the broadcast says "Electric cars for racing in big cities where emissions are a concern".... WHAT! There is so much pollution in a big city that an race over the weekend will literally be "a breath of fresh air" compared to all the pollution normally in the air of a heavily populated area. Like the idea of innovative racing but Formula E just is not entertaining. Its rather boring.
Click to expand...

It is odd, because if you look at the work involved in prepping these races for cities, the disruption even for a one day event is huge.

Large scale resurfacing, new road/cutting constructions, road closures generating delays for days each side of the event. And then possibly a month or two of disruption in less scale before the event.

You could rightly argue that although the race itself is 'green', the actual event is probably not green at all. The cities are probably worse off because of the race... and having ICE/hybrid racing would be probably only a small fraction 'worse' in pollution terms.


Hopefully as time goes on it'll all mature more. I'm also assuming that the tracks will get a re-use year on year for most venues so hopefully the costs/impacts will reduce there too.

I believe most of the events are being coupled with alternative energy and increased efficiency presentations at nearby conference centers as well.

It's also dependent on the series following through on plans to open up the drivetrain to development, so road car efficiency gains offset the cost of the racing.
You must log in or register to reply here.