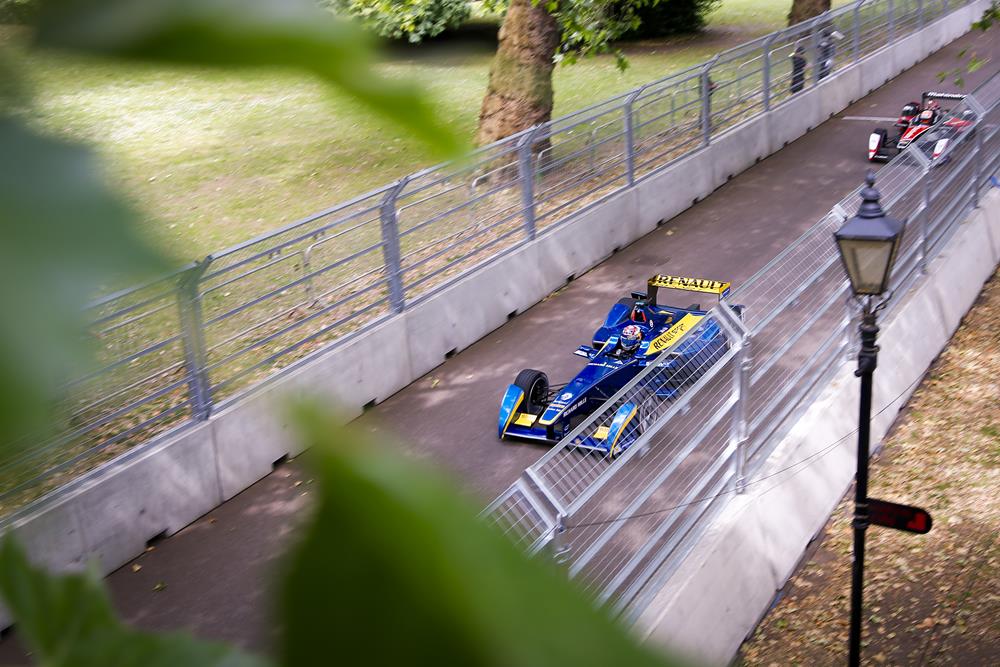 The Swiss driver gained three points for pole, and benefited from starting behind the safety car to lead the whole race narrowly ahead of Jérôme d'Ambrosio (Dragon Racing).

The special start was necessitated by the sudden modifications to turn 1 after drivers discovered a deep bump in the road during shakedowns and practice.

The cars bottomed out severely every time they hit the bump, and it eventually collapsed d’Ambrosio’s suspension, prompting a quick rethink involving covering off the bump with Techpro barrier after consulting all the drivers.

With turn 1 tightened to single file this had the added effect of essentially neutering one of the track’s main slipstreaming sections, making overtaking even more difficult.

Lucas di Grassi (Audi Sport ABT) will have appreciated this, surviving constant pressure from compatriot rival Piquet Jr, including brief contact, before pulling away in the closing stages for 4th, taking fastest lap and 2 extra points from Buemi in the process.

di Grassi closed on Jean-Éric Vergne in the newly orange Andretti Autosport but the Frenchman, having passed di Grassi earlier in the race into the turns 14-16 chicane, held firm for the last place on the podium.

Piquet Jr similarly held on to 5th against an ascendant Sam Bird (Virgin Racing) on home soil, but the championship leader has conceded a lot of points to his two challengers; di Grassi also closed his deficit to 13 points.

The result means d’Ambrosio and Nicolas Prost (e-Dams), who finished 6th, drop out of title contention going into tomorrow’s final race; Sam Bird was out after qualifying, having needed the maximum 60 points from the weekend to become champion.

Of the many debutants this weekend, Piquet Jr’s new teammate Oliver Turvey (China Racing) was easily the most impressive, the Briton overcoming trouble in the pits to finish 7th.

It is reported that organisers will work to resurface the troublesome bump at turn 1 overnight ahead of the second race tomorrow, the last of Formula E’s inaugural season.

Qualifying for race 2 is at 11am UTC on Sunday, which you can follow here on RaceDepartment through Formula E’s live online stream. It’s also available for the race at 3pm UTC.

To watch ITV’s coverage of Race 2, qualifying is on from 11:30am, the race programme from 3pm with the race starting at 4pm.

What did you think of the race? Did you have a favourite moment? Where would you rank this circuit in relation to the others on the calendar? Comment below!
Reactions: Dmitry Sorokin

The circuit is very bad for racing, and after Race 2 quals, Buemi is the clear favourite.

Manolis Sigoulakis said:
The circuit is very bad for racing, and after Race 2 quals, Buemi is the clear favourite.
Click to expand...