Force India nearly out of US Grand Prix 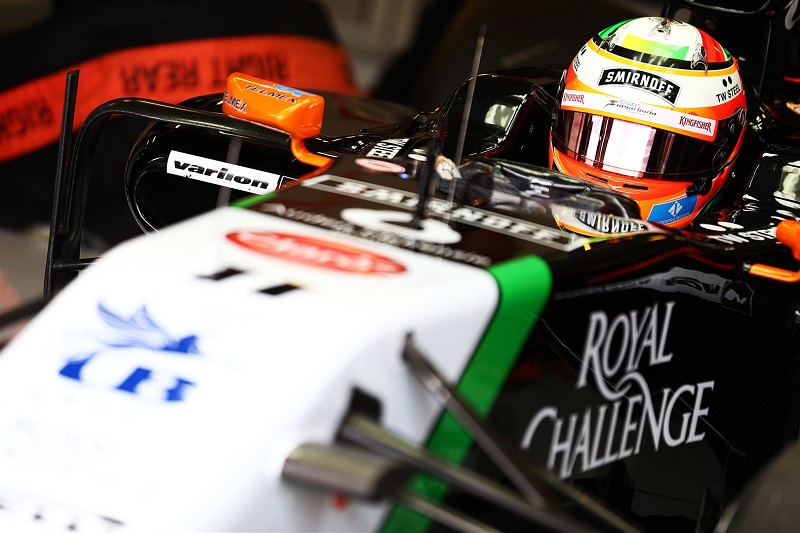 After the recent news that the two backmarker Marussia and Caterham teams were set to miss the next two Grand Prix's after going into administration, it is being reported in Germany that Sahara-Force India were close to missing out on this weekend's United States Grand Prix also.

The German publication Auto Motor Und Sport reported this week that the Sahara Force-India team only just made their scheduled payment to engine supplier and technical partner Mercedes before the October 27th deadline. A failure to pay Mercedes would have meant they would have also been on the sidelines for this weekend's race, which already has only 18 cars for the first time since 2005.

Whilst the financial struggles afflicting Marussia and Caterham is not a huge surprise considering their status in F1, rumours of financial trouble for the likes of Sauber and Sahara-Force India shows that cost cutting in F1 is something that needs to happen sooner rather than later if F1 is to preserve itself in it's current state.

It seems Sahara-Force India have dodged a bullet this weekend and will now have the latest engines and aerodynamic upgrades from Mercedes for the final Grand Prix's , which should boost them in their fight with McLaren for 5th in the constructors championship which is estimated to be worth $62 million dollars.

Thankfully F1 has avoided the potential embarrassment of another team forced off the grid at Austin this weekend with financial problems, although it's clear something needs to be done to reduce costs otherwise more teams will join Marussia and Caterham in administration. What are your thoughts on the current financial crisis plaguing F1?
M

Well it's awful (in response to the last sentence)

It shouldn't be difficult to fix this mess, and the fact that in years gone by (more than a decade ago), there was great racing and the sport was in a decent financial position means that there should be some drastic changes, otherwise we might see a USA 2005 Grid for every Grand Prix
R

That's the worst thing happened.
I wonder how many teams will be in the 2015 season?

F1: an unforgiving world (title in a French website about Formula 1).

The next 3 races are very important to Force India in the battle against McLaren for fifth in the constructors' world championship, and the possibility to receive $62 million.

We need to cut FIA if motorsport is to survive.
M

Storm Rider said:
We need to cut FIA if motorsport is to survive.
Click to expand...

Somebody needs to make a little less money and the teams needs a larger share of profits. Or it will not survive. Is there anyone that wants to see a series with 12 cars racing?

wow, if Force India had left the race would have been boring.. Usually they're the ones with the alternate strategies.

With backmarkers it's no better too, yes they are backmarkers but the race just isn't the same without them.

It's always interesting to see how effectively they get out of the way when lapped, and the great feeling when they get a good race, like when Bianchi scored 2 points in whatever race that was.

joe_alker said:
It's always interesting to see how effectively they get out of the way when lapped, and the great feeling when they get a good race, like when Bianchi scored 2 points in whatever race that was.
Click to expand...

It was in Monaco

For me it's interesting when they get close to points, then I have something to cheer about since Nando and Rosberg are doing nothing to please me

Sports business as it is now rather than just sports have completely forgotten who or why they are able to operate, the fans. Be it either pay per view TV or regulations that suit the business rather than the people who care and watch the sport. Be it F1 or football or any other sport.

This quote sums up F1 nicely.

“A disproportionate amount of time is spent arguing over how to split a dollar, as opposed to working out how we are going to make two dollars,”

Until they realise that they are losing fans, sponsors and teams because of the self centered view of a few teams and the fact that a investment company (CVC) and a buffoon (Bernie) are running the show then F1 will never recover.

When I was younger (a long time ago) a lot of my friends were interested in F1. When i speak to relatives or my friends kids who are a similar age to when I got interested none of them are interested in F1. Sir Bernard of Ecclestone does not have a clue how to engage with young people and the teams are too wrapped up in their own technical bubble.

but that's off topic

joe_alker said:
I used to support Rosberg until he proved himself to be a bit of a plonker at Spa

tbh I think that was a bit more Hamilton's fault than Rosberg's. Back then I used to be a bit more biased to Hamilton, but I also wanted Rosberg to get a chance of winning his first title. I like new kids winning, unless it's Alonso
At Spa I realised how Hamilton was kind of acting unfair since he left no room to Rosberg and then everyone starts complaining. Yes, maybe Nico should have backed out too. Both drivers should have been a lot more careful.

Milos Ancevski said:
tbh I think that was a bit more Hamilton's fault than Rosberg's. Back then I used to be a bit more biased to Hamilton, but I also wanted Rosberg to get a chance of winning his first title. I like new kids winning, unless it's Alonso
At Spa I realised how Hamilton was kind of acting unfair since he left no room to Rosberg and then everyone starts complaining. Yes, maybe Nico should have backed out too. Both drivers should have been a lot more careful.
Click to expand...

As long as Vettel doesn't get another title for while I personally don't even mind if Maldonado gets it.

Personally, i think that the financial restraints are what has kept back F1 from being at the forefront of technology. It also has to do alot with the financial crisis where large companies such as BMW Toyota and Honda no longer saw F1 as a viable marketing and technology development tool. Teams such as Sauber, Caterham and Murusia simply don't have and won't have the money to make F1 the prosperous and technology rich sport that it used to be.
What should they do?
In my opinion they should be talking to the large car manufacturers and asking them how they can make F1 suit their needs as a business, like less regulations on the engines so they can test new technology.
F1 used to be about blowing up engines and making technology that was on the absolute limit of destroying itself for maximum power!
Thats what F1 should be about, but if they don't provide a flexible platform like they do in Le Mans/WEC, F1 will slowly die, and we all know what a sad day that would be...

With the new super expensive engines they may have dug the hole too deep and what we are seeing is the unavoidable aftermath that can no longer be avoided. It is not about when things will crash. It is already happening. And let's not forget that while caterham and marussia are in administration they are not able to design the next year's cars. They may as a result miss some of the early races. And that is only if they find a buyer. What happens with force india and sauber is yet to be seen.

Even if someone like audi was thinking about coming into f1 (lol, I know!) they would probably buy an existing team instead of starting a new one. We are lucky if we lose just 2 teams imho.
H

Let the people who do the real work - the teams, drivers, etc. - get a bigger piece of the pie, and the administrators - less.

Simple concept, yet so hard to wrest the money from those greedy claws.

Is there proof regarding this news?
I know reports that Mallya is having financial problem but other joint owners are doing good. Plus its one of the team to have many sponsors on car. Really surprised about this.

Jordan Wilkins said:
now have the latest engines and aerodynamic upgrades from Mercedes for the final Grand Prix's
Click to expand...

Also how can they get aerodynamic updates from Mercedes team. Is that not allowed?
I think it will be just drive train, but it should boost their chances.

Reverse the prize money at the end of the year....that's what I say.

A bit like the NFL draft in the US. Worst team=first pick, in this case last team=highest prize money.

Or better, create a F1 like competition without FIA, which is focused on motorsports and racing instead of solving humanity problems ! low cost engines, and the possiblity to share chassis,engines and gearboxes between teams as well as more historic tracks not damn Azerbaijan ... and a more logical calendar, you don't have to visit Asia twice a year