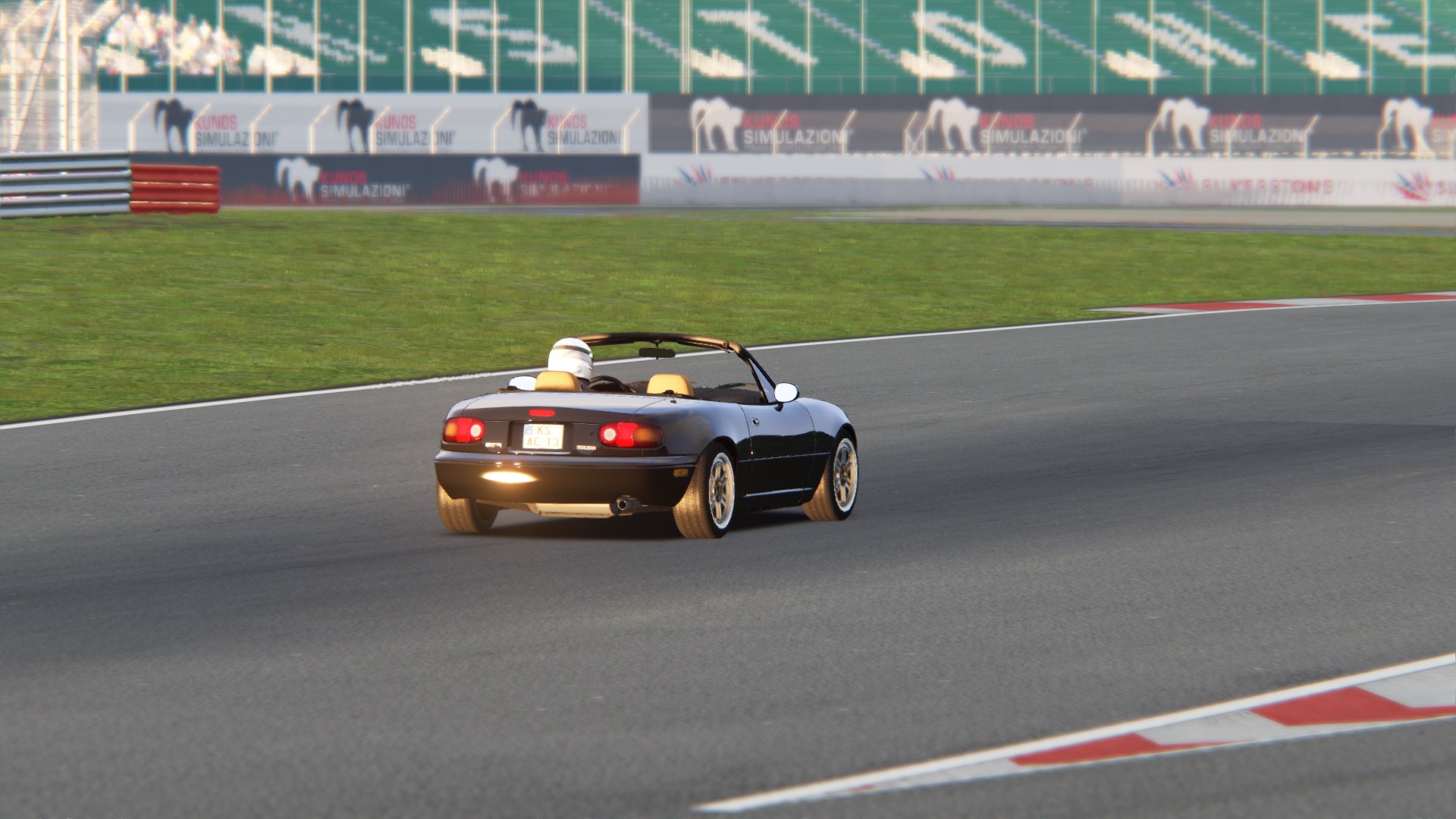 Hey guys, this is my first mod ever and I was wondering if people had some feedback or advice. I found out about AC Car Tuner, started fiddling with some stuff and this is what I came up with. I changed the model to have RPF1s that I got off of the Driftworks S15, added a turbo and changed some other settings, I'm looking for advice mainly on the suspension tuning side of things since I'm not a super experienced driver and I'm finding it difficult to fine tune things.

I increased MAX_TORQUE for braking from 1400 to 2000 and changed FINAL_DRIVE from 4.1 to 3.9 (Swapping to that final drive is pretty common for turbo miatas).

The miata only had Street 90s and Street tires but for some reason they still had WEAR_CURVE and PERFORMANCE_CURVE files for semislicks. I added a new tire type for semislicks that was a copy of the street tires, but used the semislick curves. I also increased DX_REF from 1.26 to 1.32 and DY_REF from 1.23 to 1.30 (perhaps these are a little too grippy?). I also increased WIDTH from 0.185 to 0.225, however this didn't seem to make a noticeable difference so I'm not sure if it did anything.

Then I used a tool I found online to change the dyno graph UI, and changed the sound files to use the engine noise from a S13, it's not perfect obviously but it works and makes it sounds adequately turboey.

That's pretty much it, like I said just looking for advice on what other stuff I should be fiddling with or any mistakes I made. Thanks.
Last edited: Mar 10, 2019

Hey while I appreciate any modding efforts, please make sure to not re-distribute Kunos contentlike the Miata 3D files. Maybe you can just upload the modded data files instead and leave the 3D model stock.
Z

My bad! Hadn't occured to me but totally makes sense. Removed the link for now but I can reupload the modded data files if there's any interest.
I

as far as i understand, changing the tire width (the 0.185) doesnt actually add grip in the way making a real life tire wider would. im not entirely sure what it really does, but it go ahead and make it correct for the tires you're simulating anyway, just in case. as far as making them grippier, you might just take a semislick from another car, like the e30, slightly adjust the size to reflect the dimensions of the (i assume) 225/45r15 and roll with that. i would definitely not have the rear suspension stiffer than the front. i know some common miata coilovers are 8k front/6k rear, so maybe go with that (of course youd have to calculate wheel rate, not just use those spring rates directly).

zoomafou said:
My bad! Hadn't occured to me but totally makes sense. Removed the link for now but I can reupload the modded data files if there's any interest.
Click to expand...

Heyo, how is it now?

Icky427 said:
as far as i understand, changing the tire width (the 0.185) doesnt actually add grip in the way making a real life tire wider would. im not entirely sure what it really does,
Click to expand...

It changes the visual skidmark width, nothing else.
You must log in or register to reply here.