Formula One has announced a provisional 23-race calendar for the 2021 season, pending contracts being finalised for events in Barcelona and Sao Paulo. Another race weekend is pencilled in for the weekend of the 23rd-25th of April, and will hopefully complete the record-breaking calendar.

Due to the coronavirus pandemic, the 2020 season has of course been impacted rather heavily. Next year it is expected that the calendar will have a more familiar feel about it. The season will begin on the 21st of March for its 'tradtional' Melbourne start at Albert Park, and will finish under the lights of Abu Dhabi at Yas Marina on the 5th of December. 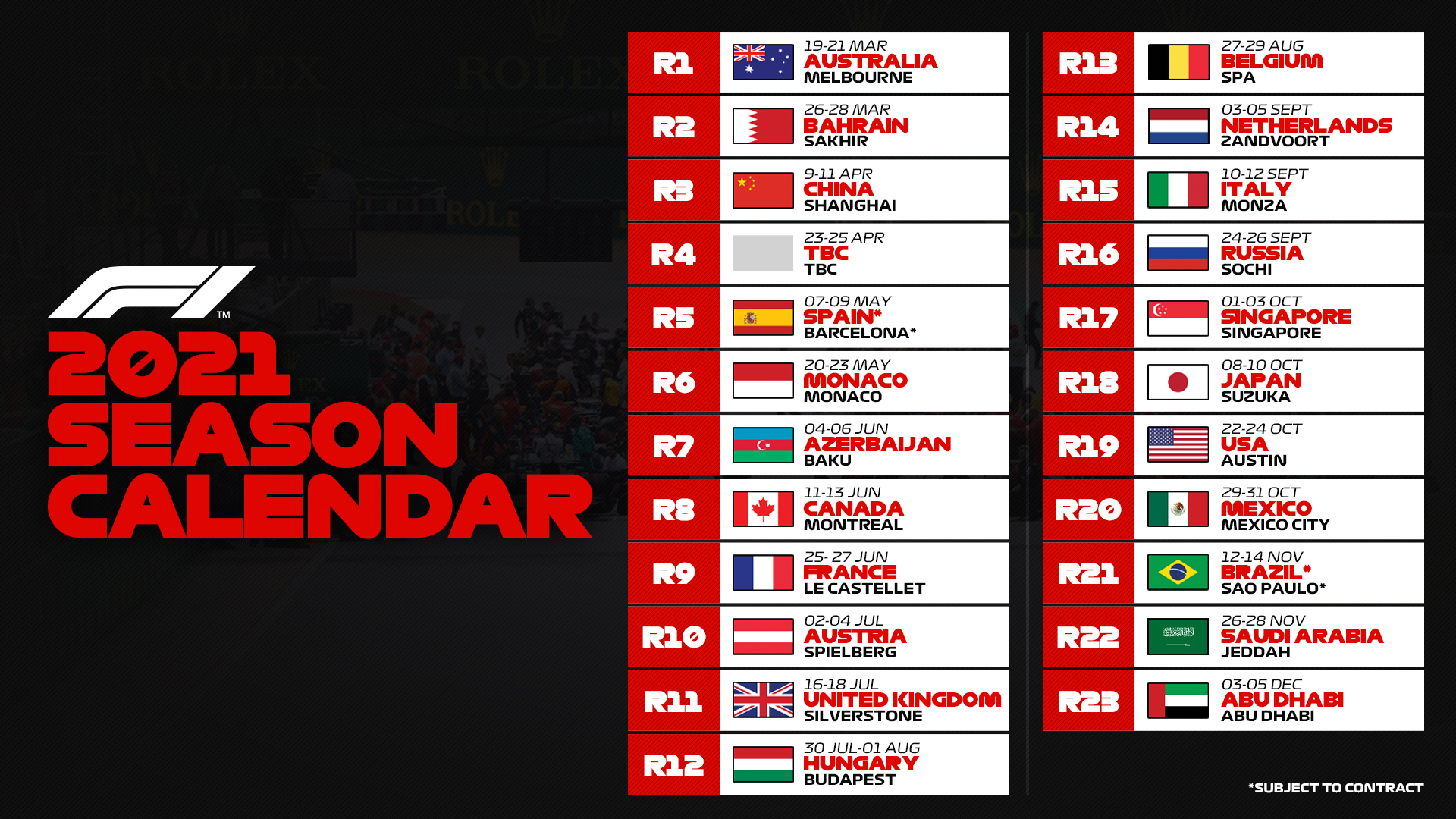 There had been question marks over whether Barcelona would be on the calendar for next season, as well as the Brazilian Grand Prix being held at Sao Paulo, amidst rumours that the sport could visit a new circuit in Rio de Janeiro upon the Interlagos contract expiring. Fortunately it seems that both are likely to be retained going into next year.

The other event that stands out on the calendar is of course the inaugural Saudi Arabian Grand Prix at Jeddah, which was announced last week. The race is expected to be held on the Corniche, which is a coastal resort by the Red Sea, and should run along the seafront. The event will precede the season finale in Abu Dhabi at the end of November. 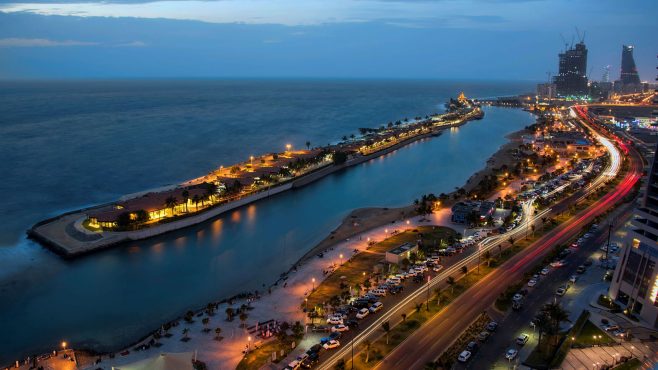 The Dutch Grand Prix will finally make its first appearance on the calendar since the 1980s at Zandvoort in September, forming part of a triple header between classics, Spa and Monza. Missing out on a slot on the calendar will be the Vietnamese Grand Prix, which was due to be held in capital city, Hanoi earlier this year. This of course means that F1's inaugural visit to the country may fail to come to fruition.

The rest of the provisional calendar is otherwise largely the same as the original one for this season. The biggest question that remains to be answered is of course about the identity of the 'TBC' event scheduled for the end of April. Seeing as it falls before Barcelona, it would be logical for the additional race to be held in Europe.

Given the success of events this year held at Portimao, Imola, Mugello and Nurburgring, could we hope for a return to one of them to mark the beginning of the 'European' season next year? To add a little fuel to the fire, the end of April is historically when the San Marino Grand Prix at Imola was held. Furthermore, President of the Emilia-Romagna region, Stefano Bonaccini has been quoted as saying he would like to see a "stable inclusion" of Imola on F1's calendar in years to come.

Let us know where you think we might end up, as we look ahead to the 2021 season. 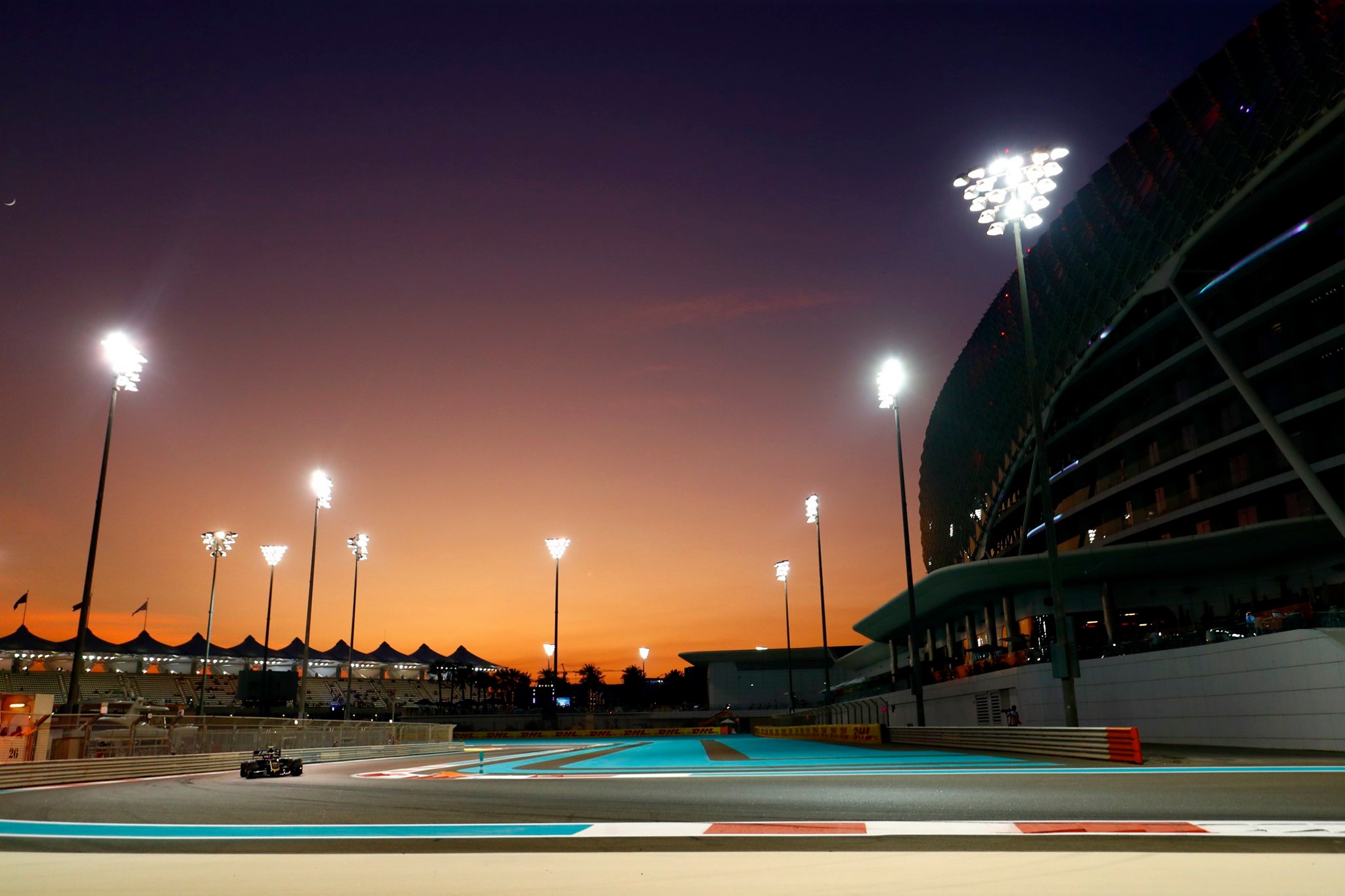 Too many races. I don't think that will be feasible.

Monaco in May is quite optimistic.

I think the first half is optimistic in so far as bums in the seat are concerned.

It's back to the uninspiring tour, couldn't keep one or more of Imola, Mugello or Portimao? On the positive side it sure does free up some weekends, to do what exactly is TBD.
Last edited: Nov 10, 2020
K

OK, now show us some progress on fixing the lack of competitiveness.
P

No way it will be another round in Sochi

25th April would be a PERFECT time to race in Portugal AND even better on the logistics side since it's just on the side of Spain!

I think a lot of people in the future are going to look back at 2020 and think "damn, what a great calendar". I hope F1 sees the potential in "random" races, or at least having some races swapped each year. Like Nurburgring and Hockenheim but on a larger scale. Have a few races that always is the same, like Silverstone, Spa, Monza (and a few other), and have the rest being changeable. It might even make it easier for a track to host a race that way, not having to pay the huge sums to host each year, but every other or third year instead. Oh well, a man can dream...

Filip Carlén said:
I think a lot of people in the future are going to look back at 2020 and think "damn, what a great calendar". I hope F1 sees the potential in "random" races, or at least having some races swapped each year. Like Nurburgring and Hockenheim but on a larger scale. Have a few races that always is the same, like Silverstone, Spa, Monza (and a few other), and have the rest being changeable. It might even make it easier for a track to host a race that way, not having to pay the huge sums to host each year, but every other or third year instead. Oh well, a man can dream...
Click to expand...

I imagine low probability of that schedule coming to fruition. And the circuits this year were very refreshing.

Filip Carlén said:
I hope F1 sees the potential in "random" races, or at least having some races swapped each year.
Click to expand...

No idea if its feasible, but I would love to see random races that are not revealed to the teams until the last moment before their travel and logistical arrangements need to be made. I'm wondering what impact it could have on the car development patterns if the teams don't know whether the next few circuits on the calendar have lots of high speed sweepers or street circuits with their point and shoot character, etc. Feels like it might inhibit the dominance of the bigger teams if there's a surprise factor invovled too.
M

23 races is way too much. I love F1, been watching since 1978, but frankly, unless the championship is still not decided before the last couple of races, I doubt I'll be very interested by December of 2021. 17-18 races is more than enough for me.

Unless of course they're anticipating that some races will be cancelled because the pandemic won't be over. I know that a Canadian GP here in June is very optimistic. Our local government has enforced strict limits on public events and there's no way it will be economically feasible to hold a race in Montreal without spectators.

And then, there's the matter of the GP of Saudi Arabia. This is from the same sport that proclaims that they "race as one" and want to end "racism". Yes, guys, go to one of the most backward thinking countries in the world, where women have zero rights. opponents to the regime are jailed and flogged and journalists are murdered in embassies. In the end, Liberty Media is just as bad as Bernie Ecclestone. It's all about money, money, money. I guess they would hold a race in North Korea if there was money to be made there.
Last edited: Nov 11, 2020

By now the F1 calendar looks like the menu list of the restaurant I usually go to. More and more circuits and tracks, most of which are useless, like the dishes in the restaurant in question. 20 circuits are enough in my opinion.

I'm so excited for the Spa-Zandvoort-Monza triple header. Best thing about the calendar for me.

I love F1 very much but I think it is useless to add races after races, moreover on embarrassing circuits like sochi, yas marina or Azerbaijan, and let the championship be over after 2 races with the domination of only one team

PawelP said:
No way it will be another round in Sochi
Click to expand...

TBC = Portimao or Istanbul or both

Charlie Lockwood said:
I'm so excited for the Spa-Zandvoort-Monza triple header. Best thing about the calendar for me.
Click to expand...

Spa is quite boring track.
You must log in or register to reply here.