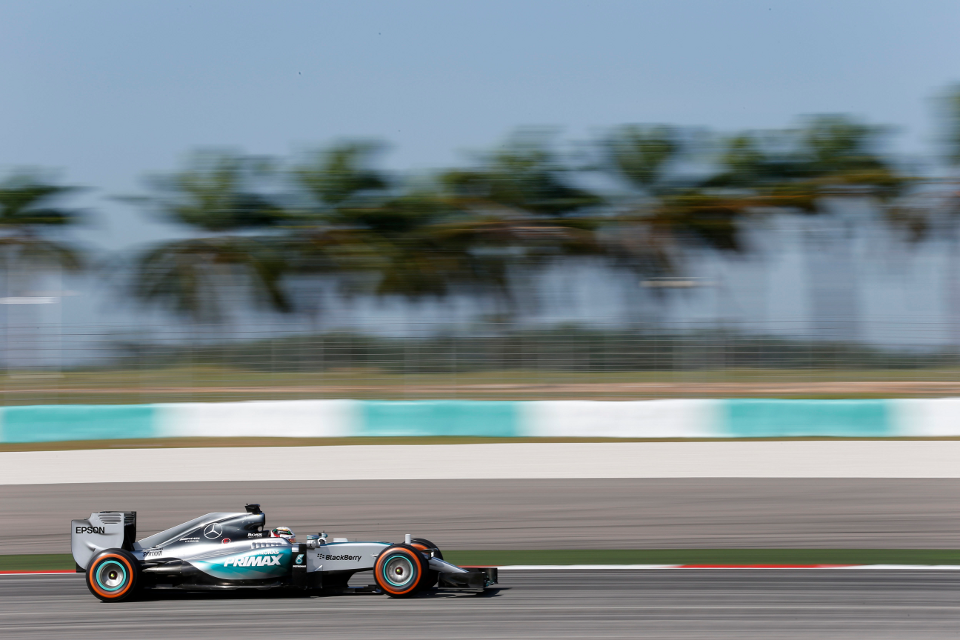 The first phase of qualifying started with a bone dry track but with the threat of rain and, lightning, certainly lingering in the air. Unsurprisingly it was Hamilton who set the fastest time on the medium tyres ahead of Rosberg, with Bottas in third and just nine tenths down despite a scruffy lap and a set of hard compound tyres.

At the back of the field Roberto Merhi was struggling in his Manor after ruining his first fast lap by running wide, whilst his team mate Will Stevens was stuck in the pits with an electronic problem with his power unit. Meanwhile both Red Bulls were struggling with Ricciardo and Kvyat under pressure with five minutes to go before quick laps from the pair thrust them into the top 10.

However, as the lightning worsened and the checkered flag fell, it was the two Manor's - who will have to go to the stewards to see if they will make the grid after missing out on the 107% time - , along with the two McLarens in 17th and 18th with Button out qualifying returnee Alonso and Nasr in 16th, who bit the dust.

Q2 was a fairly quick affair with rain falling just 3 minutes into the session starting at turn one. There were early worries for both Hamilton and Raikkonen with Marcus Ericsson hindering both drivers first laps with Hamilton just managing to squeeze through in 8th but Raikkonen could only manage 11th with the downpour making it impossible to improve his time.

So with Q2 over as quickly as it had begun it was Raikkonen, Maldonado, Hulkenberg, Perez and Carlos Sainz Jr. that failed to make the cut. Meanwhile Verstappen and Ericsson both made their Q3 debuts.

After a fairly lengthy delay Q3 started in slightly damp conditions with some drivers opting to go straight onto the intermediates. Over the line however it was deja vu once again as Hamilton snatched pole just ahead of Vettel who split the Mercedes pair. Honourable mentions also go to Max Verstappen who recorded the best qualifying for a teenager in over 50 years with 6th on the grid whilst Red Bull's 4th and 5th with Ricciardo and Kvyat respectively was an improved showing on Melbourne.

Both Roberto Merhi and Will Stevens have been allowed to start the race.

Romain Grosjean will drop to P10 on the grid, penalised two places for a pit road infraction during Q2.

Hamilton is unstoppable right now. I'm not giving all the credit to Mercedes even though I know the car plays a part in it, I think Hamilton is just that good right now. He's where Vettel was 4-5 years ago and this is the Hamilton era. To Ferrari's credit, I think their cars are much closer this year to Mercedes and Vettel and Kimi are good enough to keep Ferrari in the running but I see them finishing second this year to Hamilton and Rosberg.
You must log in or register to reply here.
Share:
Facebook Twitter Reddit Pinterest Tumblr WhatsApp telegram Email Link
15 comments
WRC 9 | Update Deployed, Finland Stages Released
11 comments
An Englishman, A South African And Some Race Cars... Wild Times In Virtual Racing
49 comments
Community Question | Light or Dark?
2 comments
Ferrari Hublot Esport | Championship Finals Day
32 comments
Formula One Portuguese Grand Prix | Driver of the Day: Vote Now