One of the most significant map expansion DLC packs for European Truck Simulator 2 since the title launch back in 2012, the ‘Beyond the Baltic Sea’ DLC adds no less than 13 thousand kilmometers of new road structures to the simulation, taking in 24 major cities and numerous small towns across Lithuania, Latvia and Estonia, parts of western Russia, and the south of Finland.

As with any new DLC release for either ETS2 or sister title American Truck Simulator, the developers have also deployed a new build update to the software, adding compatible features to the title that will be required in order to take advantage of the latest DLC offering from the team. You can check out the patch note details below: 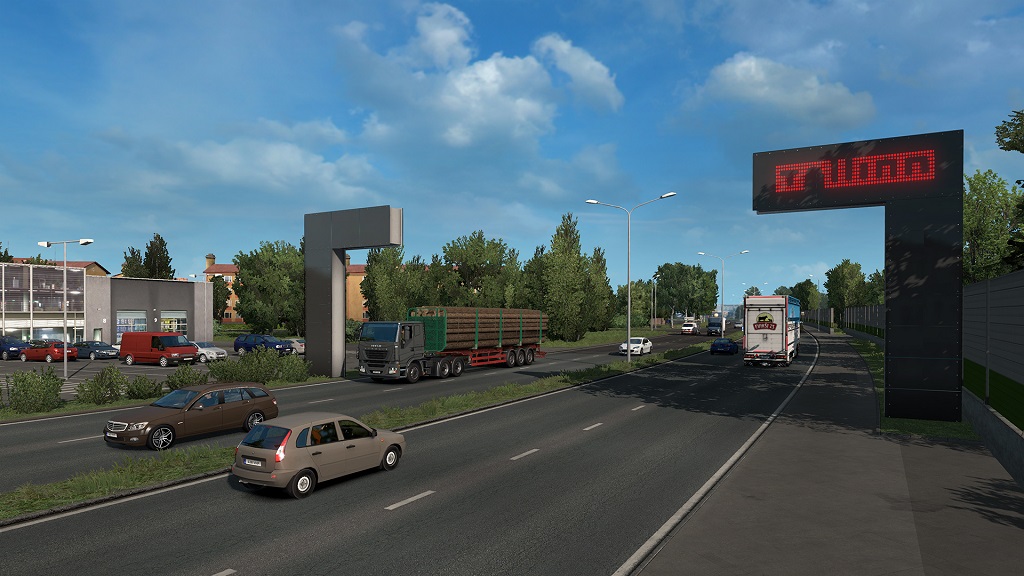 CHANGELOG:
MOD ALERT:
Due to the number of changes, most mods will need some work to catch up! 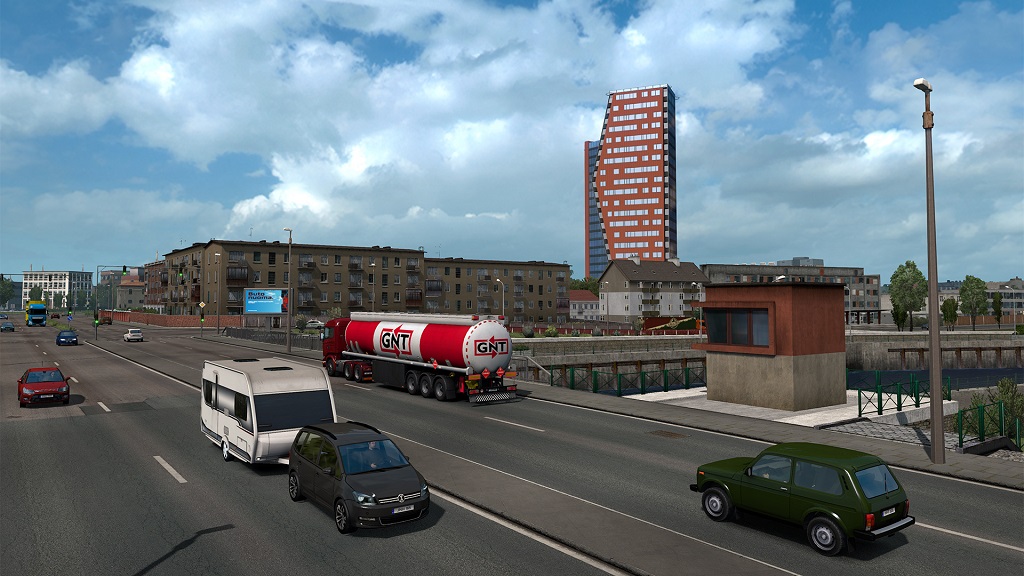 The new DLC pack is available to purchase now on Steam, and retails for around £13.49 GBP. 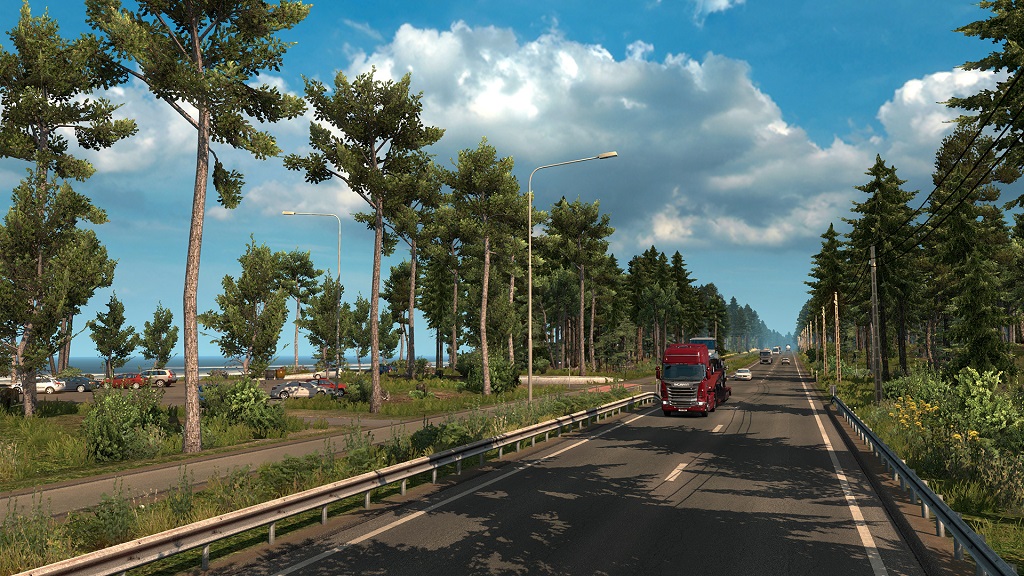 Picked this up on release on Friday. As usual if you like ETS2 then i would recommend it. Had chance to tour some of the new map and found it very enjoyable.
Upvote 0 Downvote

The best VR game to me.
Upvote 0 Downvote

Looks very good, but their DLCs are a bit expensive. I picked up a bunch of new maps (Italy, France, etc.) during the Steam Black Friday sale last weekend. I'll probably wait for a Boxing Day sale to get this new one. (I wish they would do Spain and Portugal...)
Upvote 0 Downvote

Excellent DLC once again. I must admit I initially picked up most of the DLCs and ATS on the cheap via sales, but Italy, Oregon and now this I've bought full price. SCS deserve it IMO.

I couldn't find the option for a dash cam installation!
Upvote 0 Downvote

With or without ProMods, SCS really deserves the labour of love Steam Award for their continuing work on ETS2.
Upvote 0 Downvote
D

D MIEL said:
Da game z really nice and exiting bt t z so difcot for pipo in remote areas to hve especially myself in Africa coz ts not so easy to buy or even downloading jst yo advice will be highly appreciated
Click to expand...

If you don’t have Steam, the gaming platform in your country I cannot give you any advice.
I just looked at the official ETS2 side, and there you can only buy steam codes. No standalone version.
Sorry.
Upvote 0 Downvote

D MIEL said:
Da game z really nice and exiting bt t z so difcot for pipo in remote areas to hve especially myself in Africa coz ts not so easy to buy or even downloading jst yo advice will be highly appreciated
Click to expand...

For info, there's an awesome mod on the games steam workshop (for ATS too) called HN Immersive Symbols...it gets rid of the XXXXXXX blocking roads (follow that sat nav CLOSE, because you still crash into invisible barriers!), the floating green icons (replaced with man hole covers, it's actually good) and cones for trailer pickup and parking....not updated so the new Customs check in and out of Russia areas are still green hologram things.

Driving through the map is so much better without those immersion breaking icons.
Upvote 0 Downvote

Koen Verlinde said:
With or without ProMods, SCS really deserves the labour of love Steam Award for their continuing work on ETS2.
Click to expand...

Completely agree, for me their only competitor in this category was "Thehunter classic" developers (it's an expensive af hunting sim from "avalanche studios" company, it's iracing of hunting sims lol) but end up picking SCS for these years of entertainment and support at a reasonable price
Upvote 0 Downvote

An AI downgrade and some random actions would be sufficient.
Upvote 0 Downvote

Richard Hessels said:
An AI downgrade and some random actions would be sufficient.
Click to expand...

And how often have you been to Russia?
Or is this due to the very famous russian bashing, because as we all know Putin is evil and everything is his fault?

RMR1 said:
And how often have you been to Russia?
Or is this due to the very famous russian bashing, because as we all know Putin is evil and everything is his fault?

no I don't think it has anything to do with Putin, it's probably more to do with the amount of crazy driving dashcam footage we see on the internet that originates from Russia
Upvote 0 Downvote

Well, driving in that region of Russia that is presented in the DLC has become more civilized lately. At least compared with more southern regions, it is very civilized. Main problem nowdadays is not the redneck drivers ( ̶l̶i̶k̶e̶ ̶m̶y̶s̶e̶l̶f̶) , or vile "teachers" who after seeing you doing small mistake, start getting in your way, pressing you, and basically do that until you crash or even hit someone else - traffic, people, whatever else, and then they just hit throttle and go away... they seem to be progressively vanishing over time, I see less and less stupidity like that. But main problem nowadays, well two main problems: - it's the people who never drove older cars in winter, or cars without abs, they tend to drive like it's summer, and make terrible mistakes, relying on new cars and thinking that somehow they have new technologies that overcome laws of physics. Especially scary if you see the van or big SUV going 110+ on iced highway, then it's going to change lane or the highway is slowly turning, and they BRAKE and turn, and that vehicle just flying off the road uncontrollably.
- and the people who never let you merge into traffic (still almost everyone). Even if the road has temporary roadblock (accident, construction) and you HAVE to change lane somehow sooner or later, 1 of 20 cars will let you merge.
Last edited: Dec 2, 2018
Upvote 0 Downvote

RMR1 said:
And how often have you been to Russia?
Or is this due to the very famous russian bashing, because as we all know Putin is evil and everything is his fault?

No nothing political.
Just because internet is full off countless russian dashcam videos with the most bizarre car accidents.
Upvote 0 Downvote

So the last few months simracing has taken a back seat, my wheel is no longer on my desk but every year about this time of year i get the urge to chill out with some ETS2.
Maybe its time to hook up the wheel again , i find it the single most relaxing game on the planet
Upvote 0 Downvote
You must log in or register to reply here.