I just downloaded a demo copy of EVO and have been messing around with it. Great s/w !

Unfortunately I'm having some difficulty with GTR2 now. I've been using it for years without a hitch and my recent difficulties are correlated with when I downloaded and installed the demo and are progressing.

At first I noticed with I connected on-line my name appeared as "copy of <my normal race name>". I thought it was strange didn't think too much about it.

I played left and continued to play with EVO for a bit. When I connected a second time a player name appeared that I haven't used in a very long time. When I went to profiles my normal profile disappeared entirely.

I tried to find my plr file - gone. I tried to connect again and the username and password normally saved on my computer also disappeared.

Finally after the last attempt to play GTR2 I've been prompted for a new profile name.

I've scanned my computer - no viruses.

Has anyone else had a similar problem and resolved it? 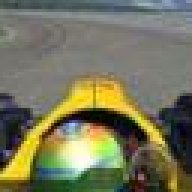 Are you using Vista?

I had a similar problem with rfactor.
I found my profile in My documents folder somewhere.
Not sure why or how but it just resolved itself.
R

im running xp. i guessed my password and it seems to be working again.

i reinstalled gtr2 and all upgrades to be sure.

i then needed to reinstall my momo software as the pedals stopped functioning. odd.