I need some help or advice to let me know if it would be a sensible idea to move from the Fanatec v3 pedals for the heusinveld sprints.

currently using the CSL Elite wheel base, but I’m thinking to fund the jump would be to sell of my Fanatec F1 rim and the V3s.

would this be a good idea or is the jump to them really not worth it.

If anyone has owned both and can give me the confidence to get them then I will. Any help is appreciated.

I'm not following the current prices of both sets of pedals. But from my experience, I wouldn't say the HE pedals are so much better in a performance that it was worth me upgrading. That said the HE pedals are excellent I and don't regret it. And the appearance of a more authentic real racing car style was a selling point for me as well.

I upgraded from stock Clubsport V3 to HE Sprints. The only improvement in my opinion has been the fact that you can install your pedals independently from the base. For the rest they feel basically the same. Therefore, the Fanatec pedals have a much better value for money, and the upgrade is not really worth.

My experience was different though, V3 was a cheap, squeaky, inconsistent toy in comparison.
Regret my purchase decision blaming myself for trying to save the money. Lost good chunk of it reselling V3 after getting HE Pro.
That thing is just an absolute beast made for some serious abuse, ingenious engineering with so many configuration options, braking was never better. Zero issue, thing just works.

I think you'd get better value for the money by upgrading from the CSL Elite wheel base than changing your pedals. The HE pedals are great, but you already have something good in that department whereas your wheel base is... er, not as solid.

I've had several pedal sets over the years (Including Logitech / Fanatec v2's / CST) and now have the HE-Pro's. The build quality, performance and customer support are top-notch.
H

Emery said:
I think you'd get better value for the money by upgrading from the CSL Elite wheel base than changing your pedals. The HE pedals are great, but you already have something good in that department whereas your wheel base is... er, not as solid.
Click to expand...

What wheel base would you suggest as an upgrade, I can’t get close to having like a DD2, I’m not after mad FFB torque but a CS v2.5 could that be a good move or is this a entry level DD that I can’t push to?
H

Thanks everyone for coming back with really good views, I like the v3 pedals being as they were a major upgrade in comparison to the standard CSL Elite pedals w/o load cell. i guess for me it’s an aesthetics thing, I like the raw look of the Huesinkveld Pedals.
Maybe a wheel base is more where my upgrade is needed, than a new pedals set..

Harry95 said:
What wheel base would you suggest as an upgrade, I can’t get close to having like a DD2, I’m not after mad FFB torque but a CS v2.5 could that be a good move or is this a entry level DD that I can’t push to?
Click to expand...

CSW v2.5 is more solid, with a metal case, than the CSL Elite. Still belt-drive, but its built to last rather than built to a price point like the CSL Elite. DD1 or Simucube Sport is another step up and puts you into the direct drive realm.

For me the issue was that the V3 pedals have a throttle with almost zero resistance even with the strong spring. Same goes for the clutch. It Just pressed through with no clutch feeling.

The brake on the Sprints feels much easier to modulate for me. I had the BPK on my V3.

Recently I've put my clutch and brake on a plate that I can slide to the left like a GT3 or F1 car which lines up the brake with my left leg more comfortably.

I think most people just answer the subj of your post (I did), without reading the content.
And it makes it sound like you are trying to decide on the next purchase between V3 and HE.
Only @Emery got it right.
Last edited: Sep 2, 2019

My biggest complain about the Sprints is the lack of ergonomics of the brake pad. I don't think it would have been much more expensive to make it more curved and with some antislippery texture, something like the Tilton pedals. Also the cable between the throttle and the brake pedal is too short. Apart from that they're fine. You can do many adjustments to make them fit your preferences. For example, for me removing all the coil spring preload makes the brake pedal feel much better, stiffer and more realistic. It seems that the default setup tries to simulate a pad-to-disc behaviour (which I have never experienced in real life) and it really feels like a defect rather than like a feature, and it was making me loose time in every braking.

Agreed that the cable is too short, but an RJ-9 extension is pretty cheap.

I have zero complaints about the pedal faces, but I do wear driving shoes which have plenty of traction. I wouldn't sim in sock feet.

I thought my comparison was appropriate. I went straight to the V3's with BPK but I have owned both it and the Sprints.

Basically the V3 is better for stocking feet and the V3 cage that supports the pedals gives them rigidity. The Sprint pedals require a solid base to mount to since each pedal is mounted independently. My Sprint brake pedal would flex a piece of 40x40 profile. Now I have it in a 40x120mm and it is also on a 1/4" aluminum plate because I like to slide my clutch amd brake to the left when I'm doing left foot braking and have no foot clutch.

Did you skip on pedal baseplate?

The one that flex?

Mine doesn't flex now and I can easily slide the brake and clutch for 2 pedal or 3 pedal operation.

I was also able to adjust the foot plate relative to the pedal hinges. It works extremely well.

Below is setup for 2 pedal operation. No flex and the foot plate is adjusted to a good height. Of course 9 x 8mm bolts holding the 1/4" aluminum plate to the 40x120 is a bit of overkill, but it's rock solid 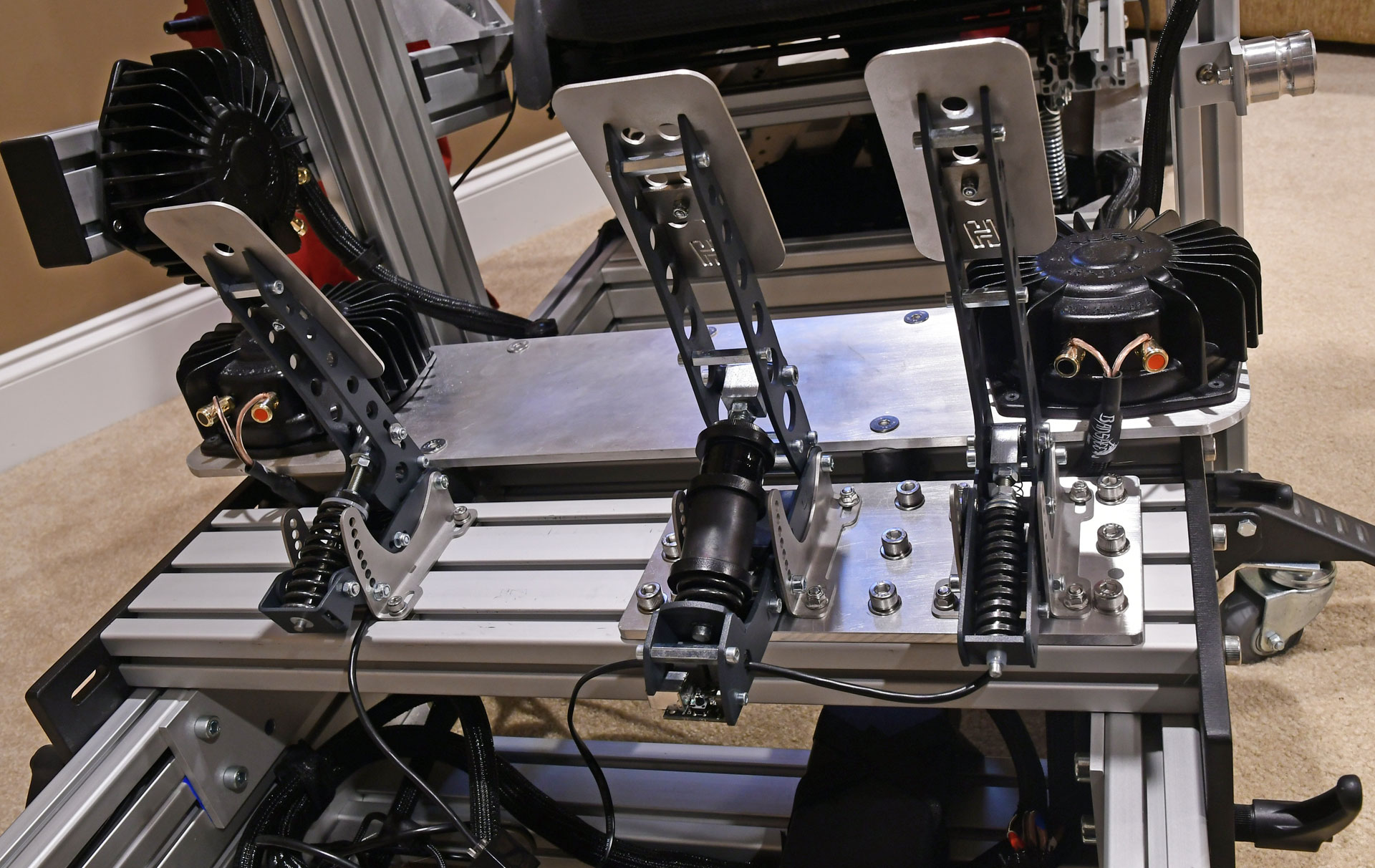 I just received my HE late last week, only have a few hours on them. Glad I made the purchase. In the one race I completed, the braking consistency was a noticeable improvement over the V3's. That said, I didn't have the Performance Kit on the V3's its not an apples to apples comparison.

What's the reason for you thinking about dropping the Fana v3s? Knowing what your problem is (if you have one) or just why you're thinking of changing would help

I could never achieve the same sort of braking performance as I did with prior sets of pedals which were non-loadcel (eg. TM T500RS pedals). With the loadcells, I would always either get too much in-game braking for the physical amount I pressed or not enough - same thing with brake-release. Also, sometimes the first part of travel would be one way but the 2nd part would be the other. I adjusted the in-game brake linearity (AKA sensitivity) many times but making one part better would make another worse. I could never achieve a 1:1 feel of my physical foot application to the resulting in-game application throughout the full 0-100% range. I've since gone back to non-loadcell brakes (TM T3PA-Pro) and am expecting my braking performance to increase back to the level of performance I know I'm capable of but lost all these years while using all those pedal sets I listed above.

When I was reporting my problems in the official Fanatec Brake Performance Kit beta testing thread (I was a beta tester for it), some people said they experienced the same as me. I remember someone mentioning that the CSP v3's loadcell was fundamentally just a very non-linear loadcell to begin with. Later when the CSL Elite LC came out, someone in the iRacing forums said the same thing and that the loadcell in the CSL Elites were fixed in that regard and are therefore much better and intuitive than the CSP v3's loadcell. I think at-least 2 people in the iRacing forums mentioned this. I therefore sold the CSP v3s and bought the CSL Elite LCs. They did seem better than the v3s but I'm not sure if it was just placebo on my part. Regardless if the issue was improved or not, it was still there.

Basically what I'm saying is if you're thinking about changing pedals because you're not happy with the braking - and you've experimented with adjusting the brakes (in-game sensitivity, physical travel, loadcell strength, rubber bushings, etc.) - then I would definitely change and try the Heusinkvelds out.
Last edited: Sep 5, 2019