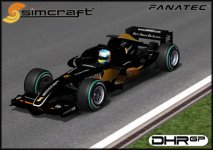 Round 10 of FSR 2010 saw the paddock head into the summer heat of the British GP at Silverstone.

The first race was the World Series, with DHR SimCraft driver “Jack Keithley” wowing the home fans, with a pole position at his home track, his first in his FSR career, and the team’s fifth pole of the 2010 FSR season. Jack got off to a good start and was in a four way battle for the lead, with all driver’s exchanging positions in an epic battle. Unfortunately heading out of the final sector Jack took too much curb and run wide and a car behind couldn’t avoid him and he lost his rear wing, and retired from the race. Muhammed Patel had a mediocre race after struggling to get to grips with the track, and got caught up in incidents, later retiring from the race due to severe damage. Ben Tusting had his career best FSR result however, after finishing in 8th position after a couple of incidents.

Jack Keithley Commented:
“The race was going great after starting from pole - led the first couple of laps and then started to conserve the car for later, but out of Luffield on lap 4 the car understeered wide and then it just spun out on me and at the time I was really surprised at how this happened.
We still have a lot of positives to take with us for next race - the team worked really hard on the car and came up with a very competitive package once again, that we can take to Hockenheim”

Next up was the World Trophy race, with all the DHR driver’s having a mediocre qualifying session. In the race however the driver’s got into the groove, as Ivan Kaloyanov coming from 11th looked set to take 2nd position in the race, until a car came back from off track and slammed into the side of Kaloyanov, knocking him of track, and causing bad suspension damage. Kaloyanov had to drive the car home with his wheel at an angle due the car wanting to consistently turn left, he finished in 6th. Former TGP Formula 1 race winner and current Formula Palmer driver instrucer Mark Johnston made his second race in the division, with another fight through the field after starting from 17th. He built his way up to 3rd position and on the final laps was able to take 2nd. Danny Lubbers made his first FSR appearance for the team. He had a back of the grid penalty, and built his way up to finish in 11th after getting caught up in a number of incidents.

The final race was the World Championship, which did not offer the same kind of promise and success as the other divisions. John-Eric Saxen had the best pace, but had an incident quite early on in the race, costing him the chance to fight for possible points; he finished in 11th just shy of points. Muhammed Patel made a WC debut, being the youngest ever driver to take part in the division, making history. And despite struggling at this track he managed to finish in 13th position challenging more established WC drivers, finishing on the lead lap.

It was mixed feelings for the home fans at Silverstone, with Mark Johnston & Roaldo driver Ben Phillips being the only British drivers to score a podium in the whole weekend’s divsion results at the British GP.

The DHR SimCraft team is looking forward to the rest of the second half of the season, with the hope of more luck in WS & WC for future events.