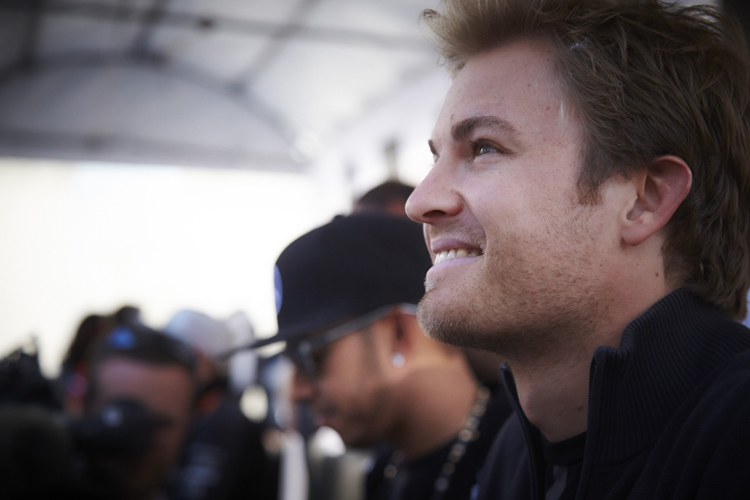 Nico Rosberg was the fastest driver in the third and final practice session for the Canadian Grand Prix at Circuit Gilles Villeneuve, a session that was halted by two lengthy red flags and saw drivers from six different constructors complete the top six and Mercedes teammate Lewis Hamilton fail to set a representative time.

Rosberg's time of 1:15.660 was nearly six tenths of a second quicker than Ferrari's Kimi Raikkonen's fastest time, that was still good enough for second place. Romain Grosjean continued to demonstrate the strong pace of the Lotus E23 and its Mercedes-Benz power unit by going third-fastest. He was followed by Valtteri Bottas in fourth for Williams, then Sergio Perez completed the top five in his Force India, and then in sixth, the fastest Renault-powered driver, Red Bull's Daniil Kvyat.

The second Williams of Felipe Massa was seventh, demonstrating the team's strengths on high-speed circuits. Sebastian Vettel was eighth, nearly a second slower than his Ferrari teammate Raikkonen. Carlos Sainz continued to show his strong pace for Toro Rosso by placing ninth, while Pastor Maldonado completed the top ten, keen to score some points this weekend.

Friday's heavy rain washed away most of the rubber on track, leading drivers such as Vettel to complain of a "very green, and very dirty" track early in the session. As the session progressed, the circuit's brake-busting nature saw many drivers lock up, barrel through chicanes, or both. The final chicane in particular became of importance, with a clarification made on Saturday morning about how the FIA will enforce corner-cutting. Drivers will have to keep to the left of a pre-installed bollard if they cut the chicane during qualifying or the race, provided they don't go over a newly-painted orange kerb on the apex of turn 14.

With 22 minutes to go, a red flag was brought out after a bizarre shunt involving Felipe Nasr. While weaving on the backstretch to put heat into his tyres, the Brazilian rookie lost control of his Sauber C33 and crashed head-on into the concrete barriers lining the track. Fortunately, Nasr was uninjured - though we can only speculate that he may have a mild contusion to his ego after pulling a Roberto Guerrero - but the Sauber team has a tall task to get his car ready for qualifying.

Then with seven minutes to go, the second red flag of the session came out when McLaren's Jenson Button suffered a power unit issue and stopped at the exit of turn seven. This came just mere moments after McLaren worked something of a minor miracle to get his teammate Fernando Alonso out on track in the closing minutes, after a routine inspection necessitated an engine change for the two-time champion. Alonso could thus only get as high as 18th, almost a second and a half slower than Button. McLaren later confirmed that Button will not take part in qualifying this afternoon.

Lewis Hamilton turned only nine laps, none of which were representative of his actual pace, and ranked twentieth and last - but is expected to be an overwhelming favorite for pole position later in the afternoon.