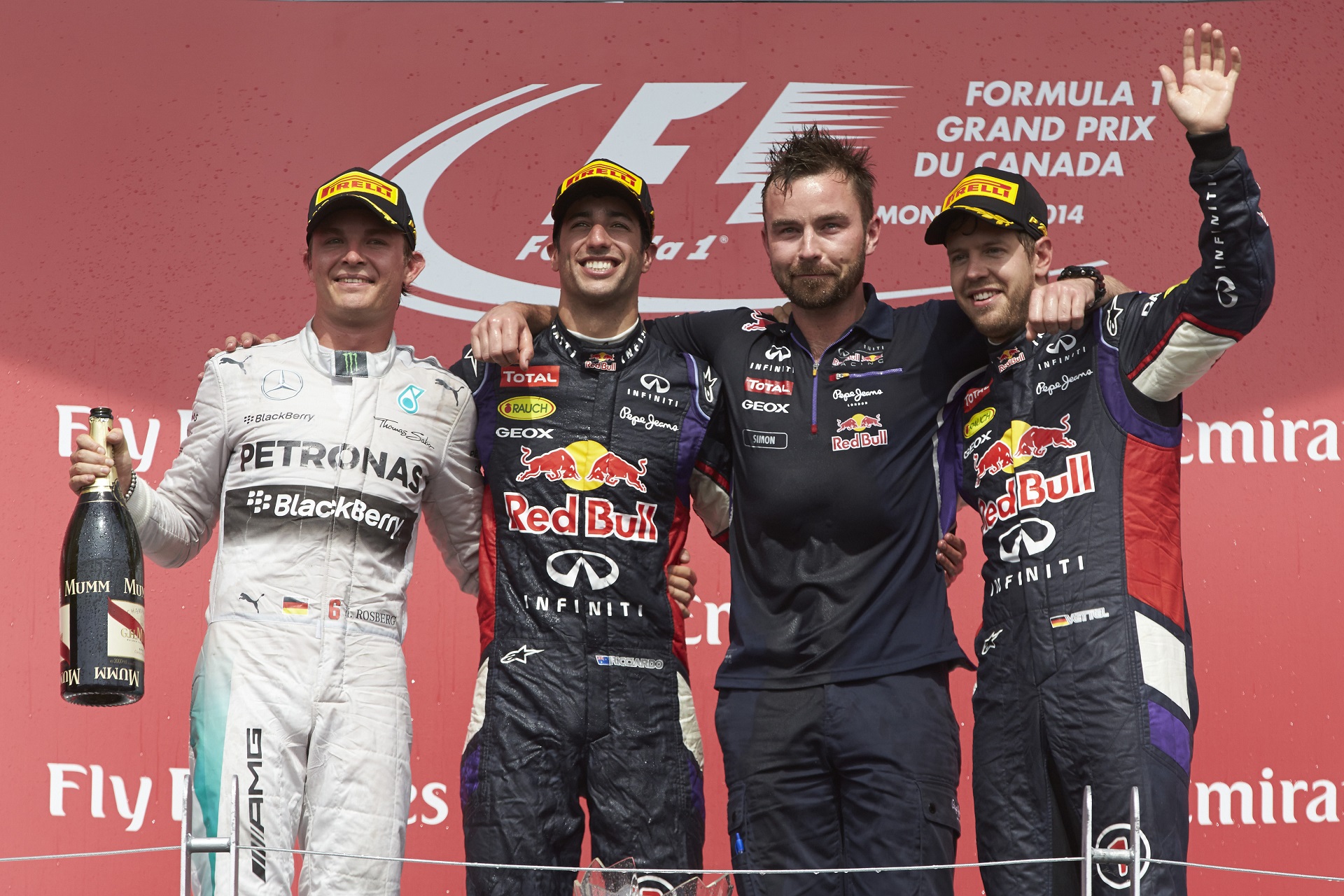 "Wow". With one word, Daniel Ricciardo (Red Bull), who has just achieved his very first GP win in Formula 1, briefly described his feelings and an action-packed Sunday at Montréal. The 'aussie' was of course the big figure of this race, but a word has to go out for Nico Rosberg (Mercedes), who managed to place his almost powerless car in the 2nd step of the podium. Sebastian Vettel (Red Bull) finished 3rd, after barely avoiding a tremendous last lap crash between Felipe Massa (Williams) and Sergio Perez (Force India).

In the aftermath of this race, some fun facts: 1 - From the starting 22 cars, only half of them made it to the chequered flag. 2 - The race finished under yellow flags, something that hadn't happened before this year. 3 - Ricciardo's victory ended a full Mercedes' domination in 2014 so far. 4 - Max Chilton's impressive 25 finished-races tally came to an end in the very first lap of the Canadian GP, after a collision with his team-mate Jules Bianchi.

And all this isn't enough to describe this Sunday's Canadian GP. Lewis Hamilton, main championship contender alongside his team-mate Nico Rosberg, fought the German for victory until a problem with the brakes cost him the race on lap 46. This and a great performance by Rosberg made the German a half-winner as well, as he collected 18 precious points and extended his lead to 22 clear from Hamilton.

Three teams out of 11 failed to take one of their drivers to the finish line. Marussia, who seems more reliable than their counterparts Lotus and Caterham, were out right from the start. A collision between Bianchi and Chilton, that ended with the British driver being penalised for the next race, destroyed both cars and the post-Monaco joy eclipsed in a matter of seconds. As for Lotus and Caterham, the retirements were due to mechanical or, in Romain Grosjean's case, chassis problems. Daniil Kvyat (Toro Rosso) and Esteban Gutierrez (Sauber) also failed to finish the race.

The turmoil doesn't stop here. As the race progressed, and right before Hamilton's brake problems, both Mercedes suffered from a malfunction which resulted in engine power loss for both drivers. If it wasn't for Rosberg's fantastic display in holding the opponents behind him, Mercedes could have even failed a podium finish in Canada. The Red Bull of Dan Ricciardo and the DRS were too strong for Rosberg with 2 laps remaining but the German still held to a precious 2nd place. 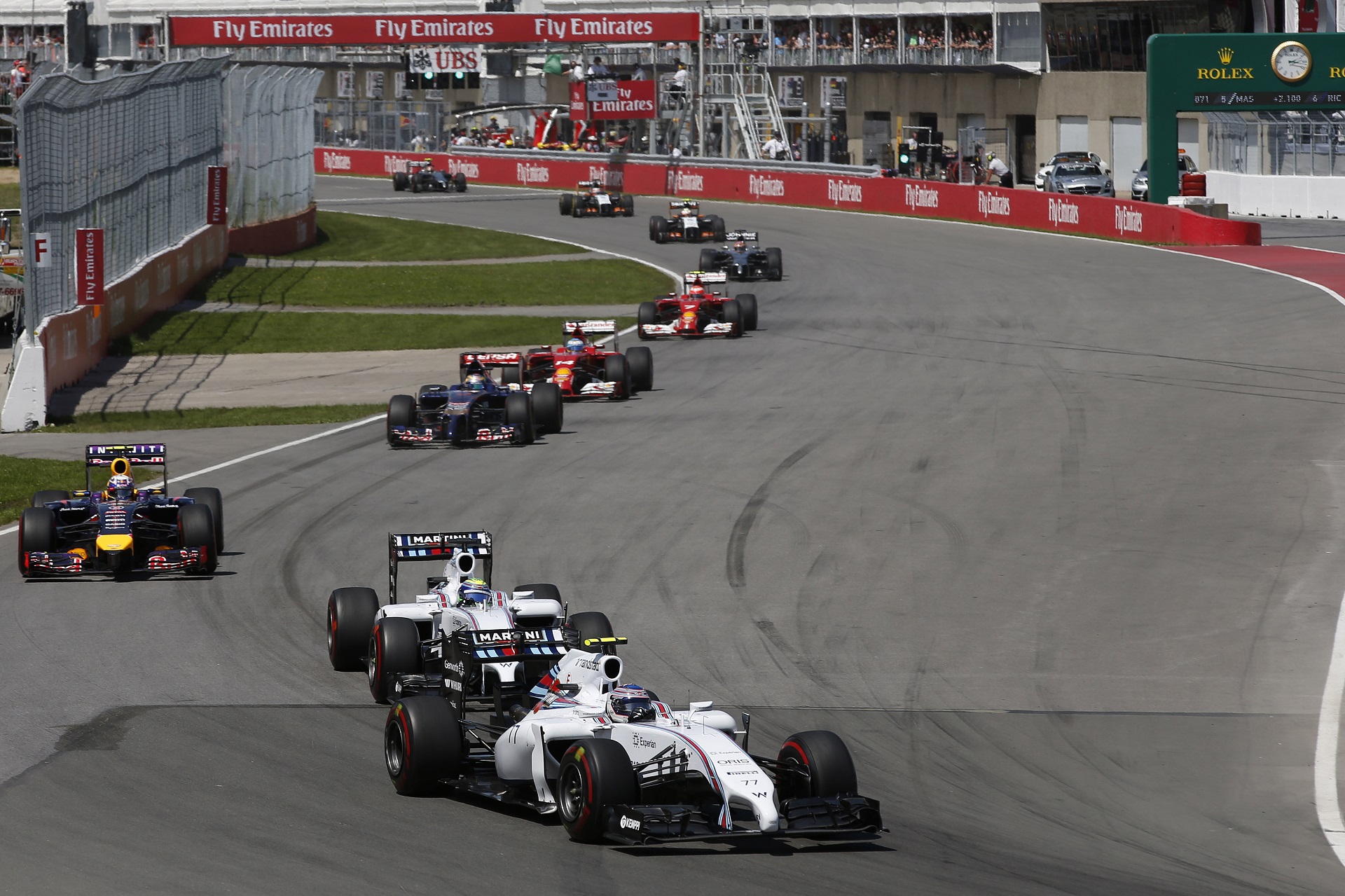 Still regarding the final standings, one of the big remarks of this race was the good performance from the Red Bulls, the Williams and the Force Indias. Felipe Massa could have changed the podium layout in his favour during the very last lap, if it wasn't for a huge contact with Sergio Perez in the finish line straight. They were 4th and 5th at the time, with Sebastian Vettel barely avoiding Massa's skidding Williams and holding to his 3rd spot. Both drivers walked from the accident but were taken to the hospital after the race for precautionary measures.

With Massa and Perez out of the contention and with the race being brought to an end under yellow flags, Jenson Button (McLaren) and Nico Hulkenberg (Force India) ascended to 4th and 5th, with Fernando Alonso (Ferrari) managing to collect four additional points to the four that an original 8th place would have earned him. Like Felipe Massa, Jenson Button also had a very good last stint under fresher tyres and with that climbed a few spots in the final standings.

Kimi Räikkönen was the last man in the points with a disappointing 10th place for Ferrari, which seems unable to tackle the lack of speed of their cars. Adrian Sutil (Sauber) placed 13th, still behind Massa and Perez in the standings and one lap behind the leader. Sutil was the only driver out of the top-10 to cross the finish line, after 70 thrilling laps.

After the race and the "wow" on radio talks, Ricciardo expressed his joy on the podium: "I’m still a bit in shock. Thanks everyone. This is ridiculous! The race really came to life in the last 15 to 20 laps. We saw Hamilton had a problem and then we saw Rosberg was slow on the straights. I was really struggling to get past Perez. We finally got a run out of the last chicane and made a nice move into turn and then set my sights on Nico and then a couple of laps to go just found myself in the right spot to get the DRS. It’s just an amazing feeling right now, I’m really grateful for this", the Aussie replied to Jean Alesi, designated interviewer for the race at the Gilles Villeneuve Circuit.

Nico Rosberg also looked pleased with his 18 points and after a tough race for Mercedes: "It was a big battle all the way through. Managed to stay ahead until the second pit stop and we had a problem in the pit stop and I think that’s the main thing. I dropped behind as a result. From then on I didn’t really know what was going on because I lost a lot of power so very slow down the straights, just trying to hang on and to put qualifying laps all the time but it didn’t quite work out against Daniel", the German explained. 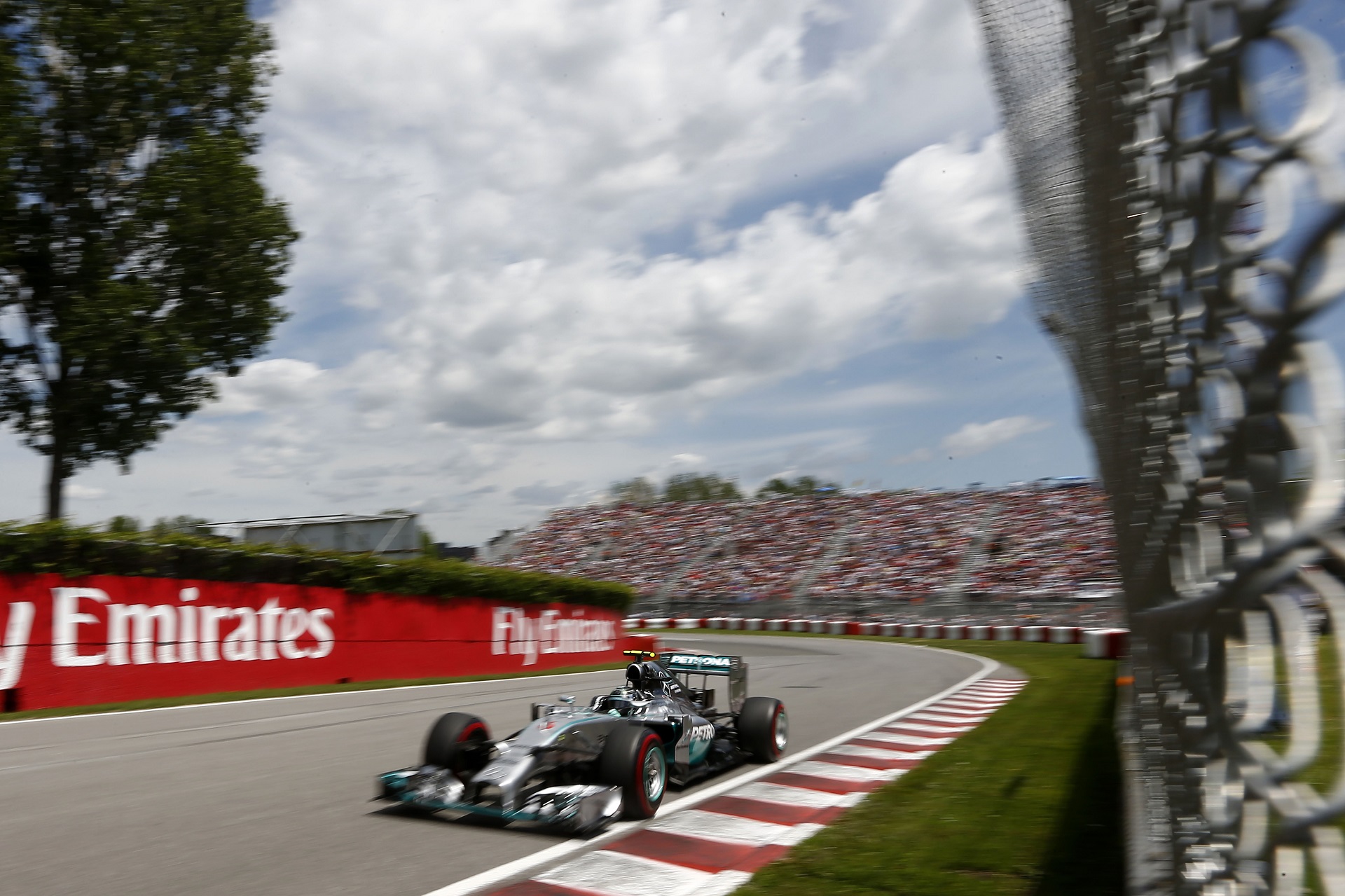 Still world champion Sebastian Vettel gave his view on the race and his new team-mate, 105th F1 racing winner: "Well, he’s still a nice guy! Congratulations to him, first of all, it’s his day. Obviously, as he touched on, the race really came alive towards the end, it came to us. Obviously a big help from Mercedes this weekend, unlike all the other weekends, but we were there to capitalise. As we saw there is still plenty of work ahead of us as the Mercedes were quite a bit quicker than us down the straights but all in all a very good day and once again congrats to Daniel".

Apart from Red Bull, the Williams and the Force Indias were the other two forces to be reckoned with during the Canadian GP, despite the good result achieved by Jenson Button's McLaren. However, a very unfortunate last lap incident took one of each team's drivers out of a points finish. "It's massively disappointing to lose that position with Felipe at the end. It looked like he was going to get past Perez and they've had a collision. Valtteri (Bottas)'s race was going well but we were a little bit hot, having to manage engine and brake temperatures, as a lot of other cars were. That dropped him to ninth, which was recovered to seventh with Felipe's accident. In free air the car was very quick, but we've lost a lot of points that we should have picked up today", a disappointed Rob Smedley said in behalf of the Williams team.

As for Force India, "the most important thing today is that Checo is okay after that very heavy impact on the final lap. He had done a fantastic race, challenging for the lead for a large part of the afternoon and holding on to what was shaping up to be a very strong result", began team principal Robert Fernley. "Nico (Hulkenberg) delivered another very solid performance, making the most of an alternative one-stop strategy. He drove smartly to resist incredible pressure towards the end of the race and was able to bring home another good haul of points (10 for 5th place)".

Well, with all this, F1 critics must now reconsider their position towards the competition, which seems exciting as ever. Yes, the cars' sound is not V12 engine-like, but for now the scenario is this: Rosberg leads Hamilton with a 22-point advantage, as the Red Bulls closed in. Ferrari will be keen on sorting their problems out, as Williams and Force India continue to show improvements and are closing the gap for the two Mercedes. McLaren can't be discarded as well, with a 4th and 9th place in Canada and a lot of room for improvement. The struggling teams, namely Lotus, Caterham and Marussia, all failed to finish this race and after Marussia's 9th place in Monaco with Jules Bianchi, they will all be looking forward to achieve good results on the upcoming races. 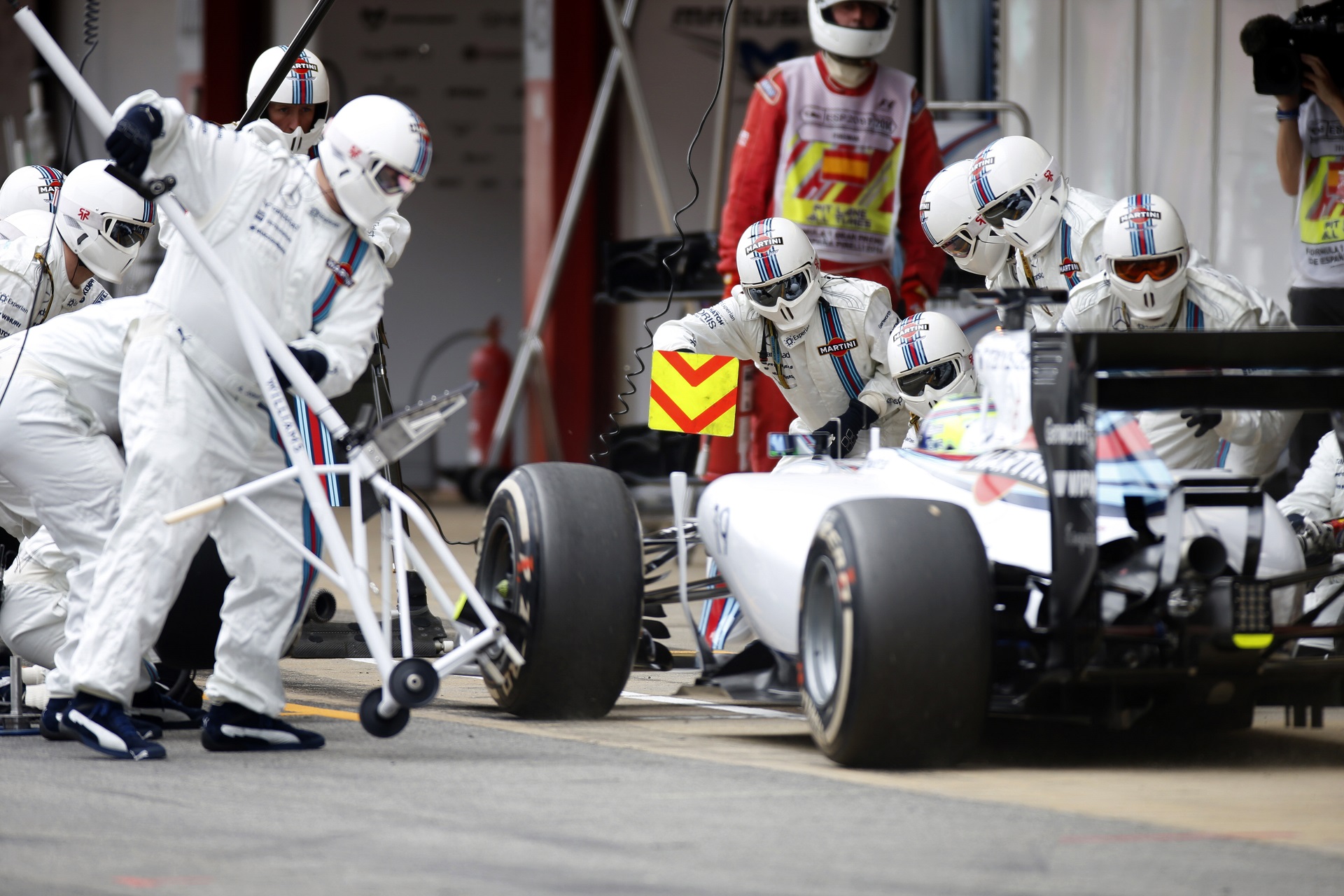 The Austrian GP, in Spielberg, will be Red Bull's home race and starts on the 20th June, in just 10 days. After a race for F1's history books, make sure you don't miss this one out. It may very well be another thriller.

Due to all the chaos at the end I've completely missed that Button finished 4th. That's a great result for McLaren for a change.

Of anyone who could of broke Mercedes' winning streak, I'm happy it was him. He's raced his balls off this season so far and he deserved every single swig of that champagne. The only downer to my races is Kimi's sh*tty luck at the minute.

Amazing drive by Rosberg also.
Hamilton was stiff with failing brakes as he looked very fast.
The way Danny handled the pressure in those last 10 or so laps was tremendous.

BTW,used to the car sounds and actually like them now.

This review was perfect, I read the whole thing! Even though I have the race recorded. I was so excited to see my favorite driver win finally after him finishing in 3rd to Mercedes all the other past races. What is everyone perspective on Perez, and Massa? I've been reading a lot of rabble on this topic, but would like a mature perspective of what you all think.

Was very happy to see Dan's first win, an incredible job by Rosberg to keep a podium. Was sure he was going to drop back many places with the problems. Was a very exciting race!
D

He can possibly take more wins after that.