Recently I've installed Motec to help me reduce the time I was spending bulding my setups... so I decided to start one from scratch so I could learn how to use the tool and interpret the data.
I've choose the Z4 and Monza to make the test.

So I started tuning the tire pressures... then aero... then ride height. This last one was particular difficult for me because the rear of the car was always lower than the front (except on braking), even running only 2 points on the rear wing like I was. So the only way to make the rear around the same height or higher than the front was lowering the front by 8mm, which IMO seems kinda unrealistic.

Anyway... after setting the ride height I went to set the camber... but that's when things really started to make no sense to me. The data showed that the camber was way too high and tire temps showed a big difference between inner/middle/outer. So i've lowered the camber a bit to -2.6front and -1.5rear and managed to achieve a 1.48.701, worst than my best atm with default cambers (1.48.633). Obs: camber values are from the "status screen" on the pit.

Not only I wasnt able to reproduce my previous time, but the Motec data showed almost no change between the inner/middle/outer of the tires or camber values.

This is what I've got before adjusting the cambers (obs: all data is from default channels within Motec): 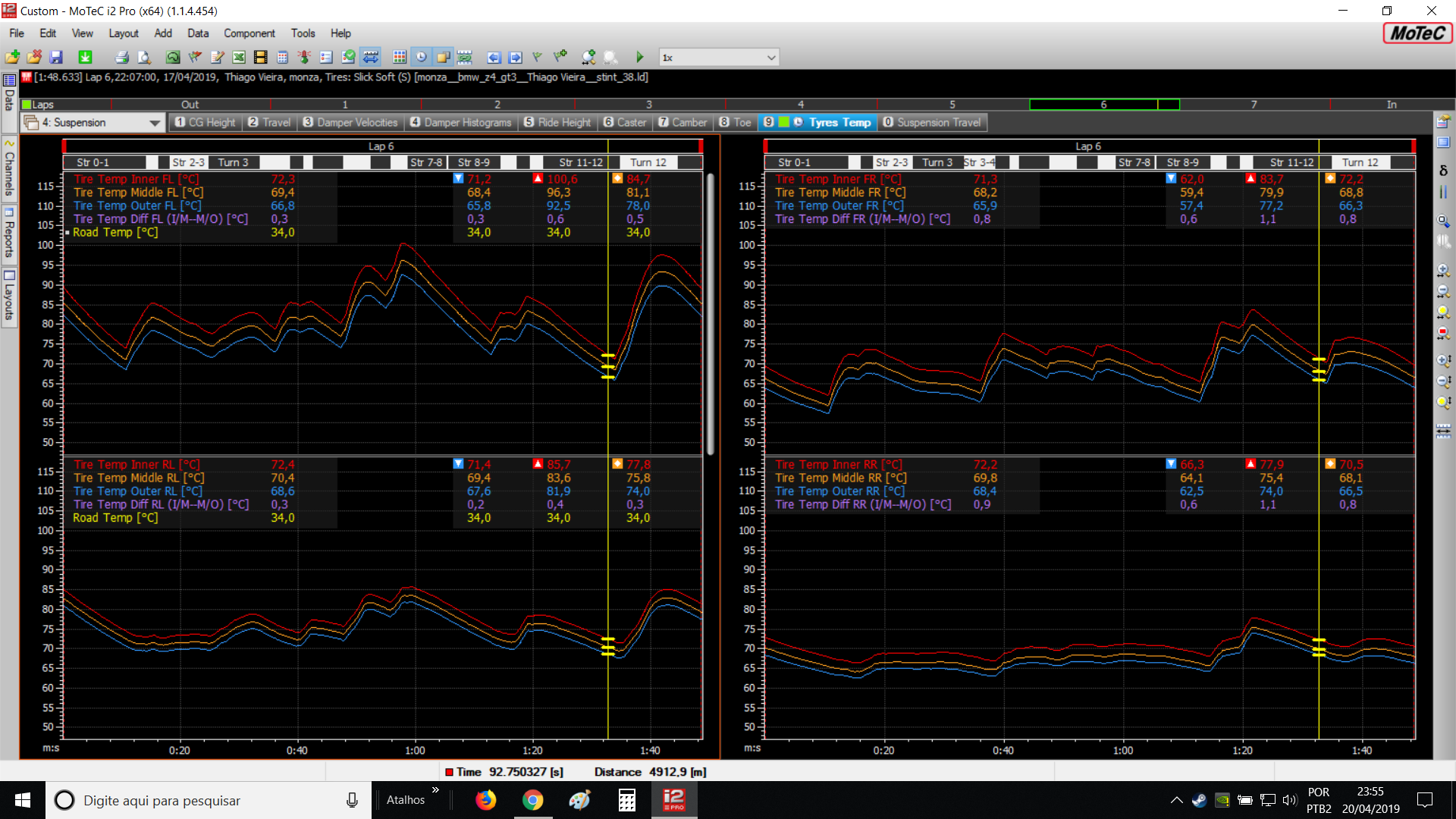 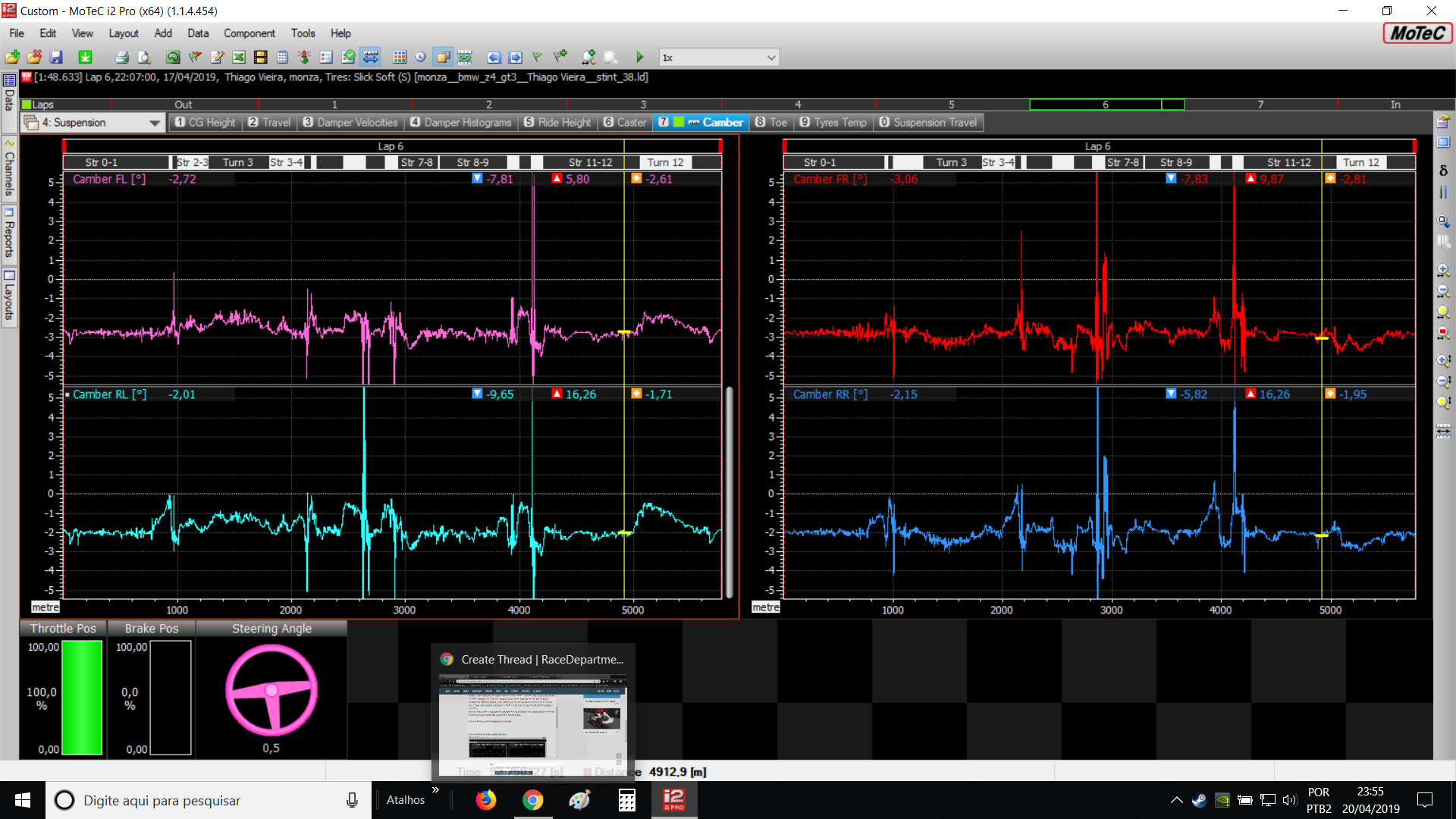 This is what I've got after adjusting cambers: 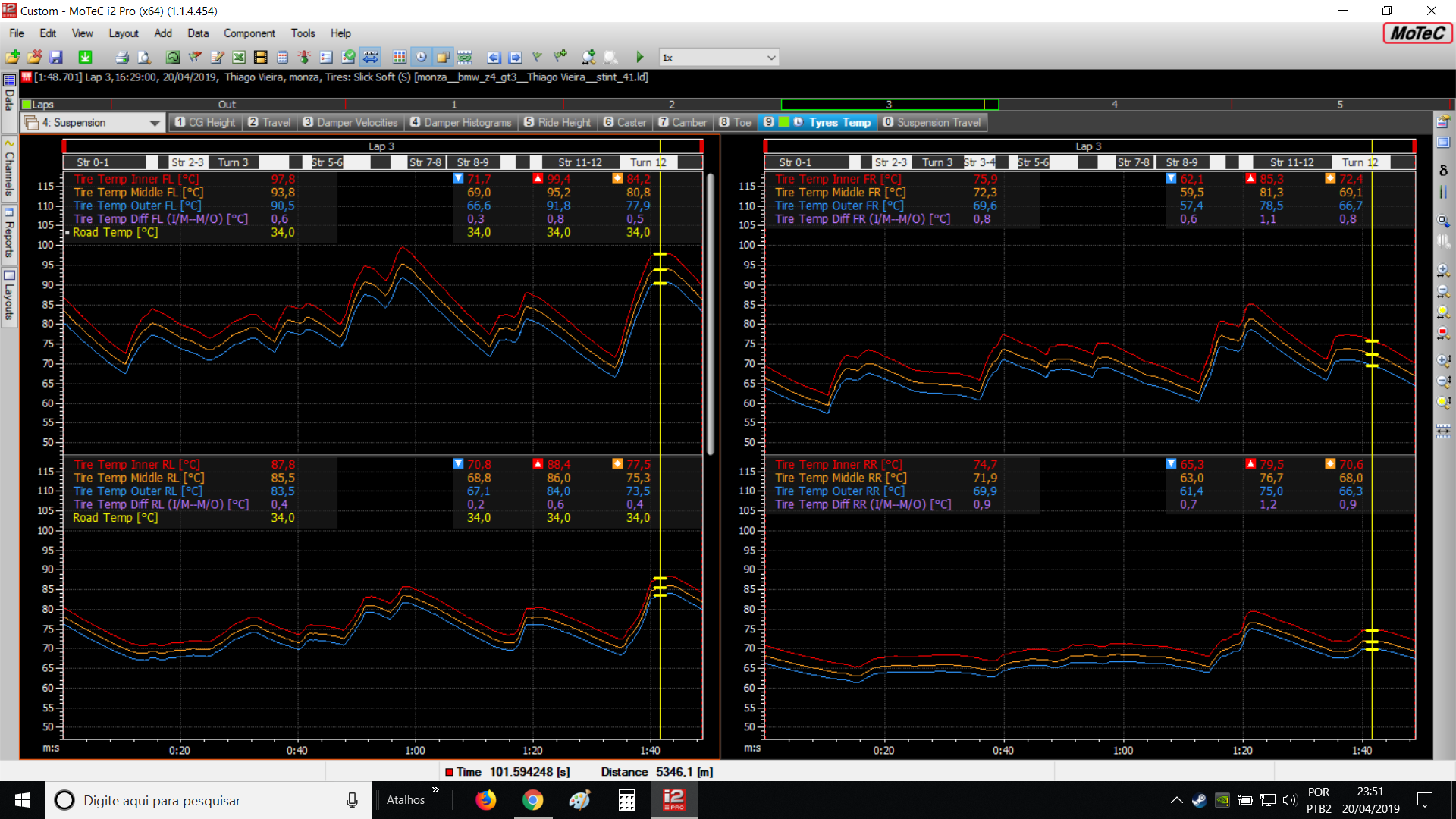 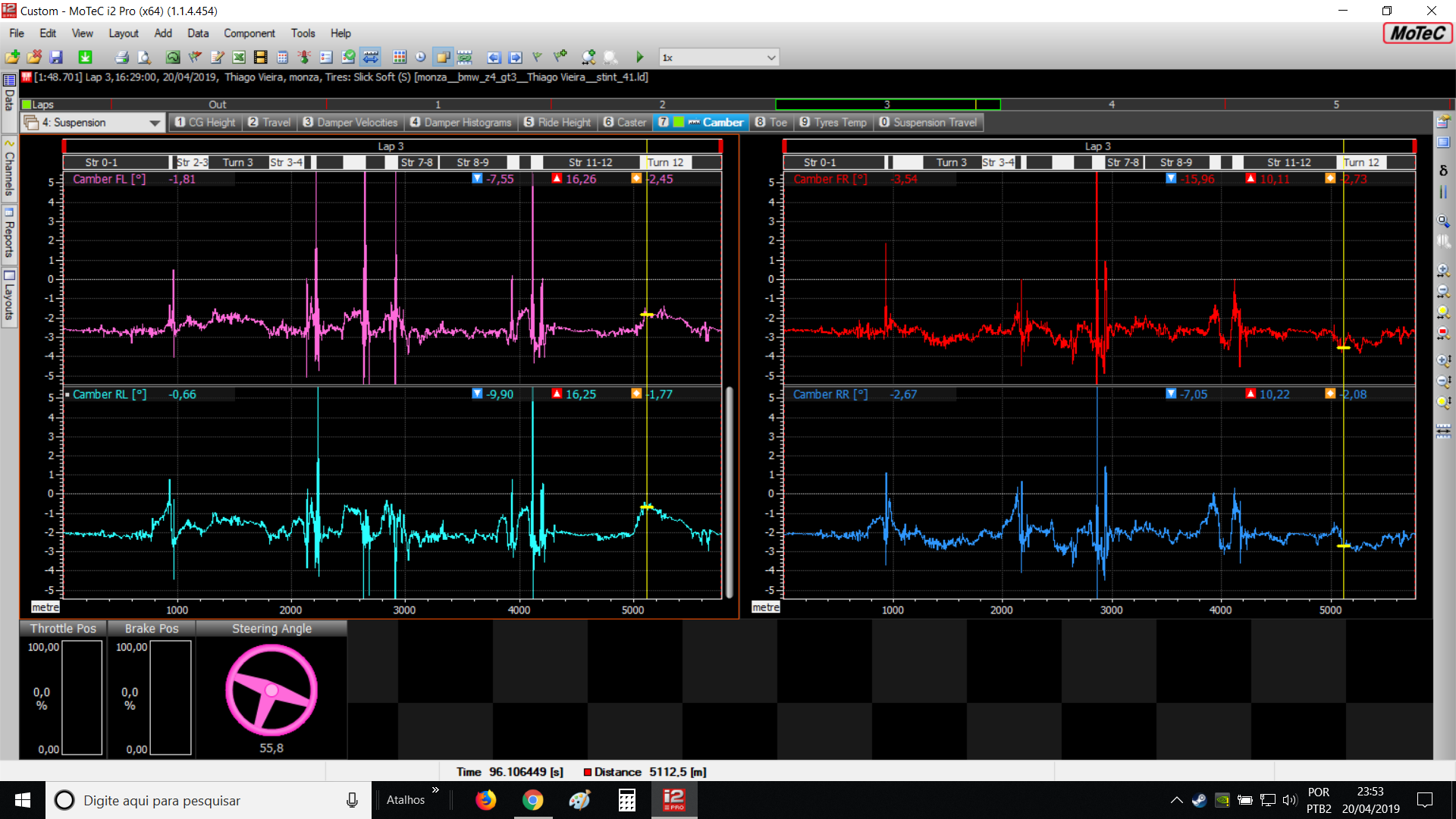 Obs: spikes were me hitting kurbs.

At that point the car felt intringing. It had more understeer on entry and exit, specially at turns 9-11, but despite having oversteer under acceleration, it wasnt quite a snap like it was before... it was more linear and I could correct it before it was unrecoverable.

But since I was intrigued by the data, I've decided to lower the camber to it's minimum at the front (-1.0) and almost that at the rear (0.00) just to see what Motec would show me. After running 5 laps or so I was left with more ???? than I was expecting. Motec was showing me almost iqual temps on the rear tires where the camber was 0.00 and that the front tires were good with at -1.0. This is what I've got: 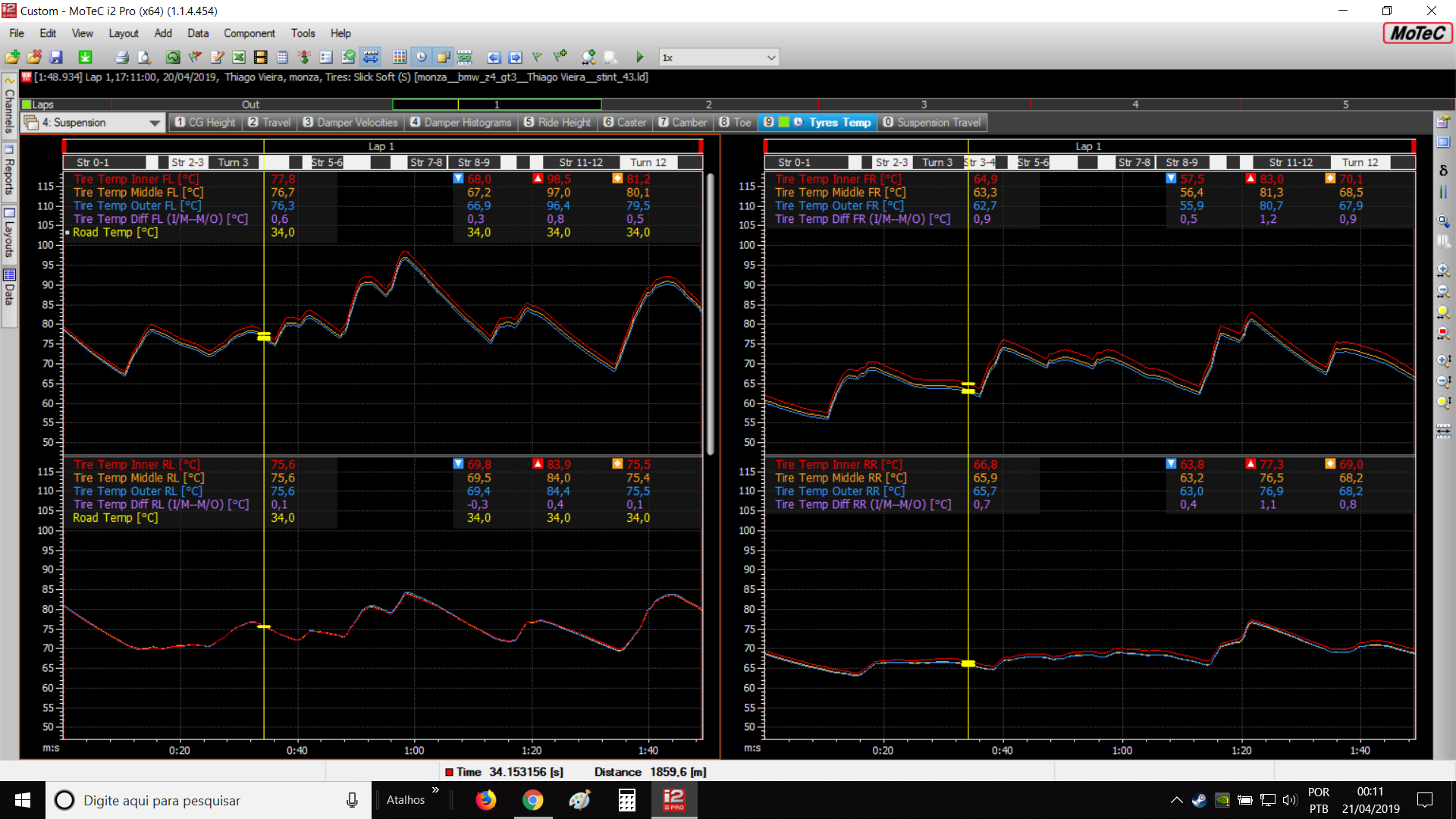 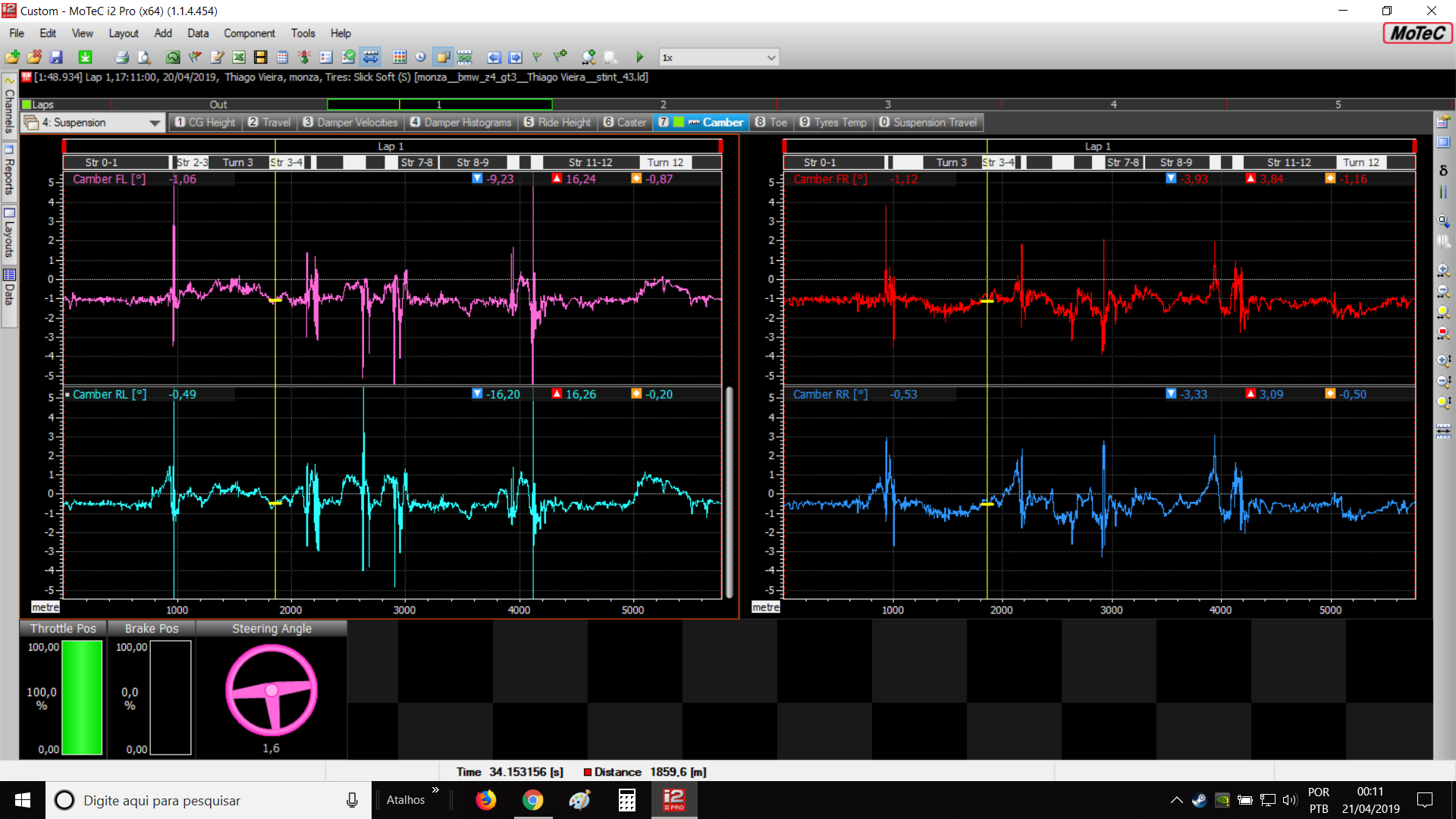 Not only that, I've managed to run 1.48.9 with no rear camber angle, which shouldn't be passible, At this point the car had a lot of oversteer at turns 9-11. Entry/middle/exit oversteer. Also had a lot of understeer in all parts of those corners too.

After that I've raised the camber values a bit with the difference of -1.0 between front and rear... the car felt better and I've managed to make a 1.48.5, which it's my best time with that setup. Difference between inner/middel/outer tire temps is higher than before: 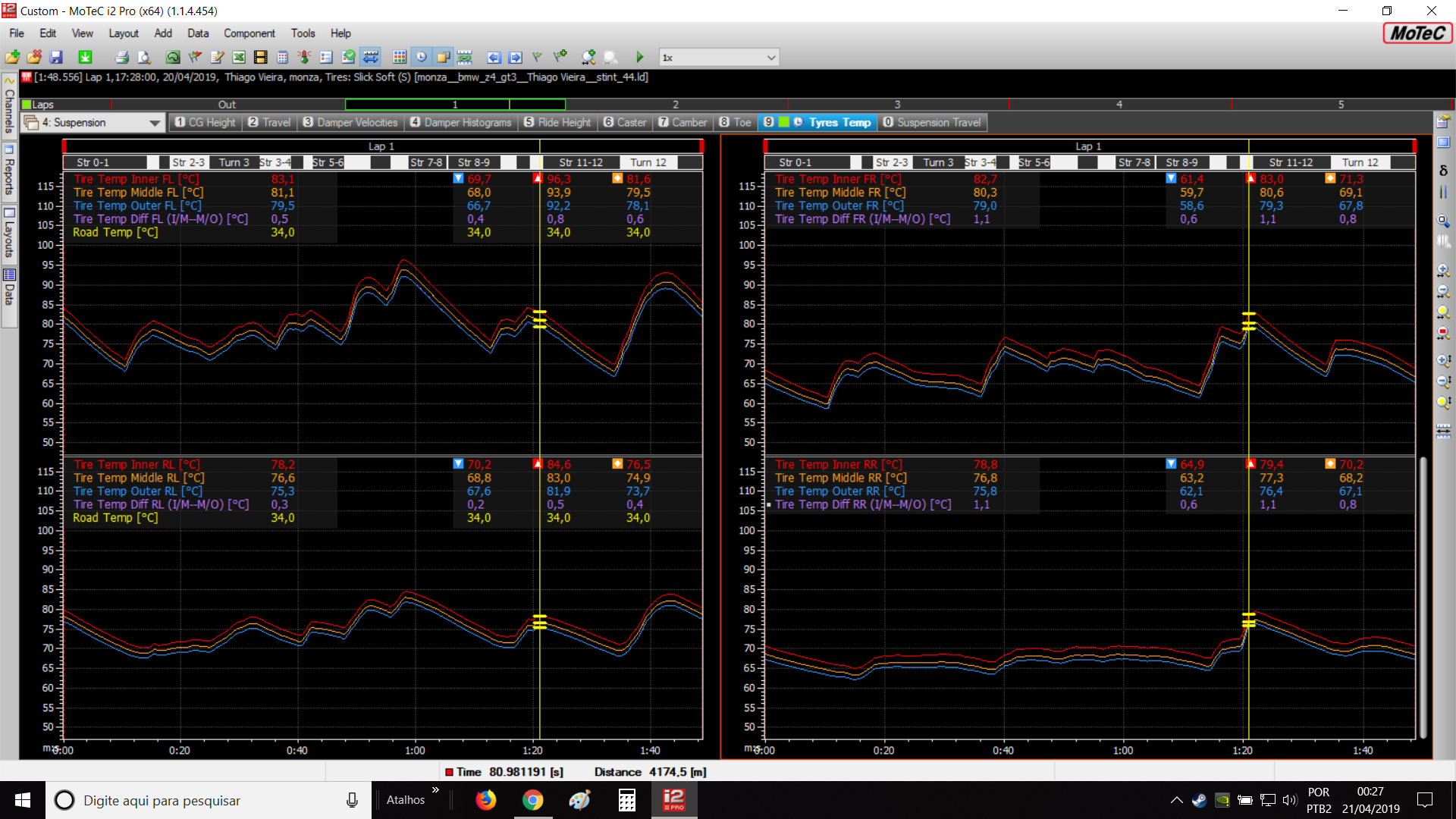 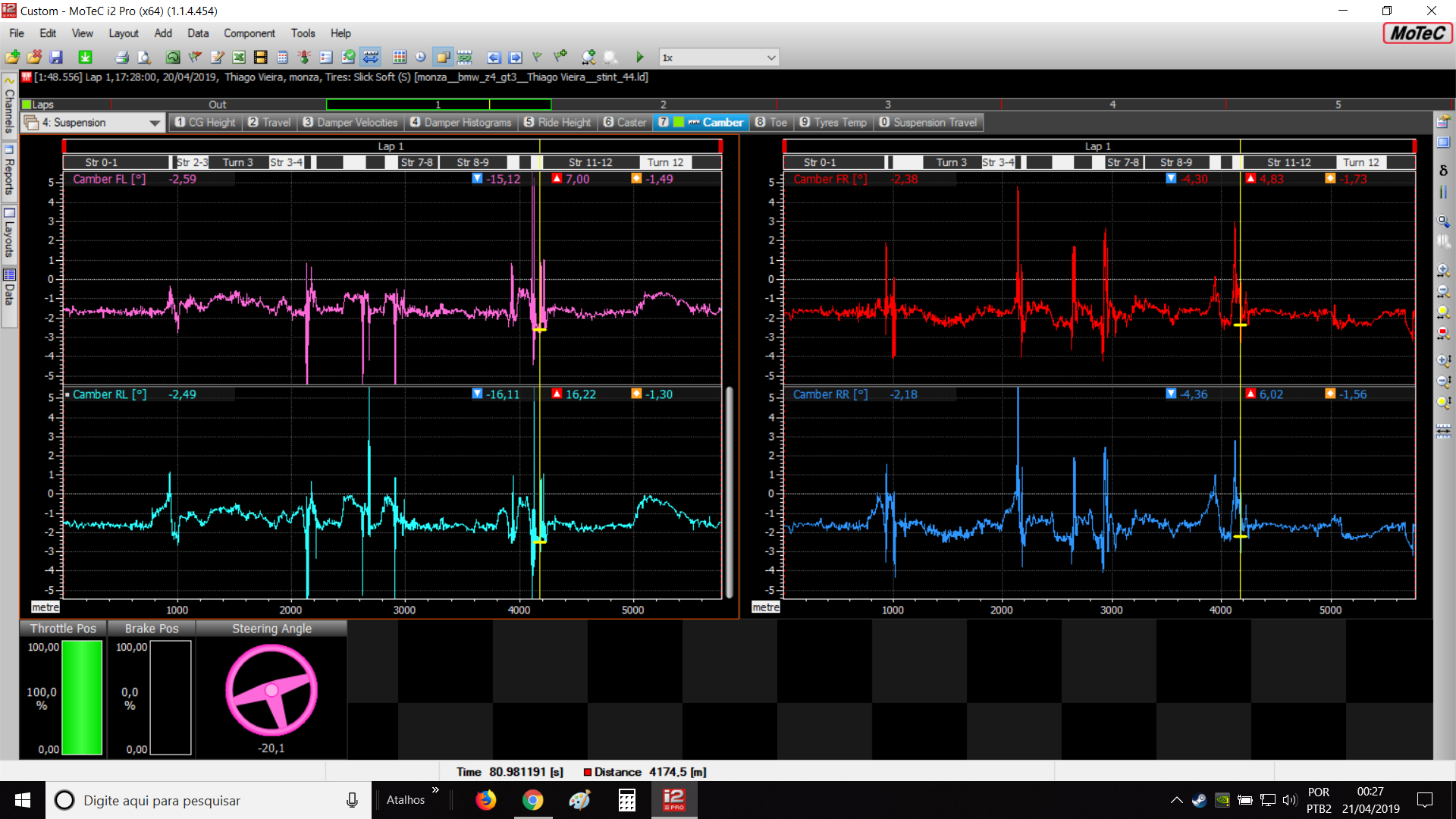 What really intrigues me is the fact that Motec is showing that you'll only get more or less equal temps if you're at more or less 0.0 camber, which could make sense at straights but not at corners.

As far as I can tell by this is that optimal camber cant really be adjusted by using tire temps and even the camber channel in Motec should be taken cautiously. If that is correct, then camber in AC is actually a matter of choice and the right balance between front and rear, as long as you dont go to the extremes.

What you guys think? Is that really the case or am I missing something?
You must log in or register to reply here.

Help with temps vs pressures