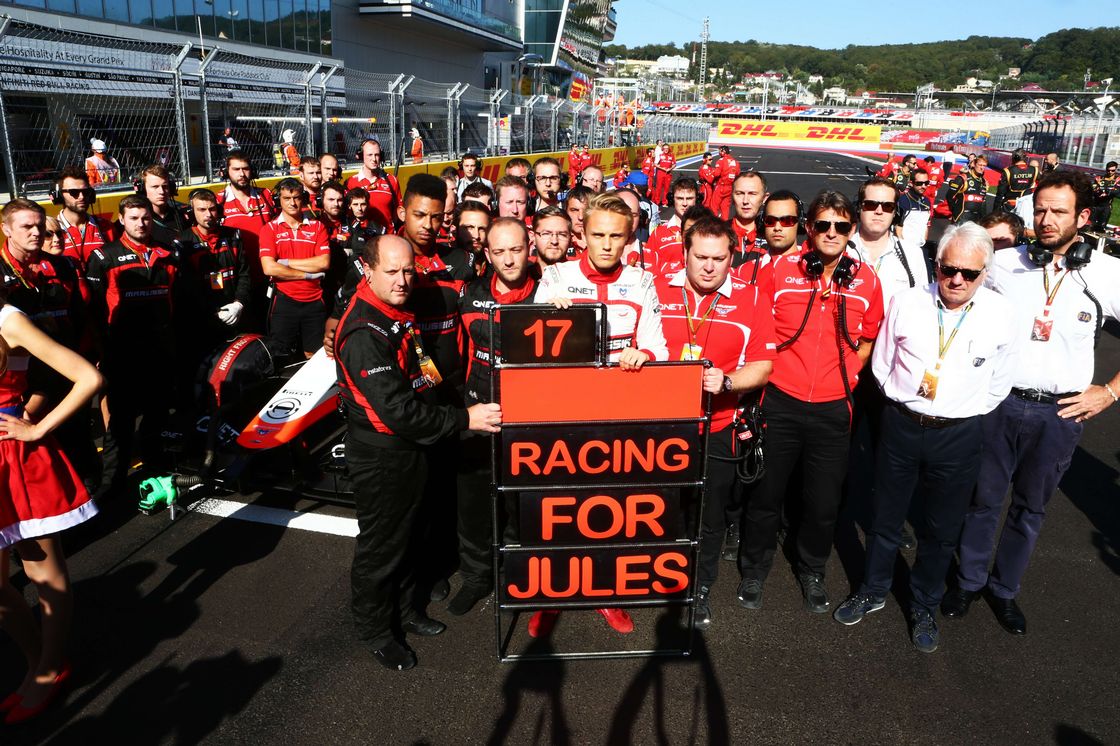 With Monday's news that the Marussia Grand Prix team had entered administration, it has been revealed that two British businessmen Baljinder Sohi and Sonny Kaushal are very interested in purchasing the team for roughly £50,000,000.

After a nightmare few days for the team which has been forced to miss the upcoming American and Brazilian Grand Prix's after entering administration, on top of their emotional distress surrounding the grave injuries suffered by lead driver Jules Bianchi at the recent Japanese Grand Prix also.

The Daily Telegraph has reported that Marussia Chief Executive Andy Webb approached Sohi and Kaushal to invest in the team. It now appears the two are close to agreeing a deal, with the only sticking point being an apparent £10 million difference in valuations of the team. Sohi was quoted by the Daily Telegraph " We are very close to a deal, But it has to be the right price. We have put in a serious offer and we will see what happens."

From here it seems the Marussia team has reason to be hopeful with potential new owners, although it's clear the deal isn't quite done yet as they both struggle over the valuation, which of course includes taking on the team's debts of around £30 million pounds also. I sincerely hope we can see both Marussia and Caterham at the season ending Abu Dhabi Grand Prix, although both have a way to go yet to make the grid in November.
Last edited by a moderator: Oct 29, 2014

It seems to me that with even a lower spec team, the very high costs now associated with power plant deals, wind tunnels etc mean that the distribution of revenues model is now not appropriate.
The Concorde deal which has served ok in the past really serves the top teams.
It means that the top teams get all the big sponsors and most of the prize money and most of the sports revenue.
It can mean one team having F1 revenues outside their own investment capital of circa £200m and another nil or say the £10m that Bianchis Monaco result will earn the team (next season BTW).
It just doesnt work. However the vested interests (top teams) have the say and so far have served themselves and not the sport. I hope they wake up before they kill the goose that laid the golden egg.

The whole Indycar grid could function on the budget of a single top 3 team in F1.
Now I'm not saying that F1 should go the way of Indycars but certain things could drop the costs hugely.
EG Customer teams: Would we really mind if Marussia was the same colours as now but used a Ferrari Chassis and engine instead of just the engine.

In F1 the lions share of the sporting revenues gos to the top teams that inherently have more sponsorship pulling power too.
So we have a triple whammy. More capital, faster cars, more revenues from F1, more sponsor revenues. The money follows the money.

The alternative is to distibute a higher % of the sporting revenues to the lower ranked teams like they do in Gridiron. Then you have an interesting sport.

When you have
Caterham in adminstration
Marussia in adminsitration
Sauber in serious financial difficulties
Force India in trouble
It is not one team making mistakes, its several well run and talented teams in trouble and a sport that needs a rethink.
D

The biggest issue in F1 right now is that the teams make up the rules. That simply isn't how a sport should be ran, and it's always a conflict of interest in having to decide about rules that might hurt your team.

Take the engine freeze for example. Mercedes has had a great year with the new engine, and why on earth would they ever agree with something that hurts their chances of a repeat next year? Unfreezing the engines is a conflict of interest for Mercedes, and all the other engine suppliers involved. One side want it unfrozen so they can compete with Mercedes, but Mercedes wants it frozen so that they can keep hold of their dominant position.

In no other major sport do the teams have so much say in the going ons of the sport itself. You don't see the Premier League teams decide the rules, because you'd know that they would only think about their personal interest, and no the interest of the masses.

If F1 wants to grow and become as great as they claim to be. They need to revoke decision rights for teams, and keep it at a consulting level only. The teams may come up with ideas, but they can't have final say in the matter.
The final say needs to be done by a group of unbiased sporting luminaries who think about the best interest of the entire grid, and most importantly the best interest of the viewer.

Having close races are what's in the best interest of the racing fan, and that means smaller teams need to be able to compete with the bigger teams. And no team should 1-2 the majority of the season with +20s gaps between them and the 3rd guy.

look at how long minardi survived ob very little money. All these rule changes every year,are spiralling costs out of control.

and on a less serious note, those businessmen don't sound British...

joe_alker said:
and on a less serious note, those businessmen don't sound British...
Click to expand...

They're British Indians. Made their money in steel I think.

"Baljinder Sohi and Sonny Kaushal, a Conservative Party candidate for council election this year in Slough..."

The only way they will fit in with F1 is if they're dodgy and corrupt. Anyone have any gossip on them?

Edit - all checked out ok:

Slough's The Village is Bankrupt

Further edit - that bankrupt company was run by Sonny's father. Then this happened:
Slade Properties Ltd - another £2.00 Company

On 12 May 2008 Sanjiv Kaushal was replaced as a director by his 20 year old son Sonny Kaushal. Ten days later, on 22 May 2008, the company changed its name to Slade Properties.
On 11 May 2010 Slade was publicly warned by Companies House that unless it filed overdue company documents and reports the company would be struck-off the companies register.
The last published accounts dated 31 March 2010 show the company did not trade in that financial year and had debts or losses, carried over from previous years, of £296,502. The issued share capital continues to be two £1 shares held by Mr Sonny Kaushal.

The combined cash at bank value for all businesses where Sonny holds a current appointment equals £78, with a combined total current assets value of £32,428 and total current liabilities of £1,172,943.

Considering they're apparently billionaires having made their money in steel there's very little info out there, although interestingly there is/was a guy in Slough called Baljinder Singh Sohi who made some money, but he had to pay most of it back.


Slightly different name, and the name Singh is probably as common as Smith but after Mansoors Millions, ya never know.


One of the comments seems to suggest he has a brother, but then so do i.


ETA: Interestingly at the court of appeal the "Singh" portion of the name seems to have disappeared.

Taken from another forum.

going off that, they sound like they come from a shifty background at least. Can't see them surviving too long if the deal goes through.
M

Except 'Marussia' is a Russian car company

lets hope they never get sponsored by an Agricultural company,
and they go from Red Bull to Bull ****

Rami Saidy said:
Except 'Marussia' is a Russian car company

That's like changing 'Red Bull' to Yellow Bull because a Brazillian Millionaire purchased them
Click to expand...

there is no more marussia as car company, it closes a year ago and I think there is no russian teams in F1 in future
M

Stanislav Minakov said:
there is no more marussia as car company, it closes a year ago and I think there is no russian teams in F1 in future
Click to expand...

Ah thanks for the info

lets hope they never get sponsored by an Agricultural company,
and they go from Red Bull to Bull **** [/QUOTE]
How about an indian billionaire than we will have Red Cow

Marussia used to be owned by a billionaire (Richard Branson) when they were Virgin Racing (which was derived from the partnership of Manor Motorsport and Wirth Research). Manor Motorsport used to be based in South Yorkshire, not too many miles from where I live.

Marussia Manor Racing filed a notice they were assigning an administrator on 7th Oct this year. This week Russian financial backer Andrey Cheglakov withdrew his interest in the team and news came out that Baljinder Sohi and Sonny Kaushal would be potential buyers.

Unless Sonny and Bal come up with the goods, not looking good for Marussia.

On a lighter note, I was so hoping when I saw the news a British duo were interested in taking on Marussia that it would be the Chuckle Brothers.

Dang!
You must log in or register to reply here.