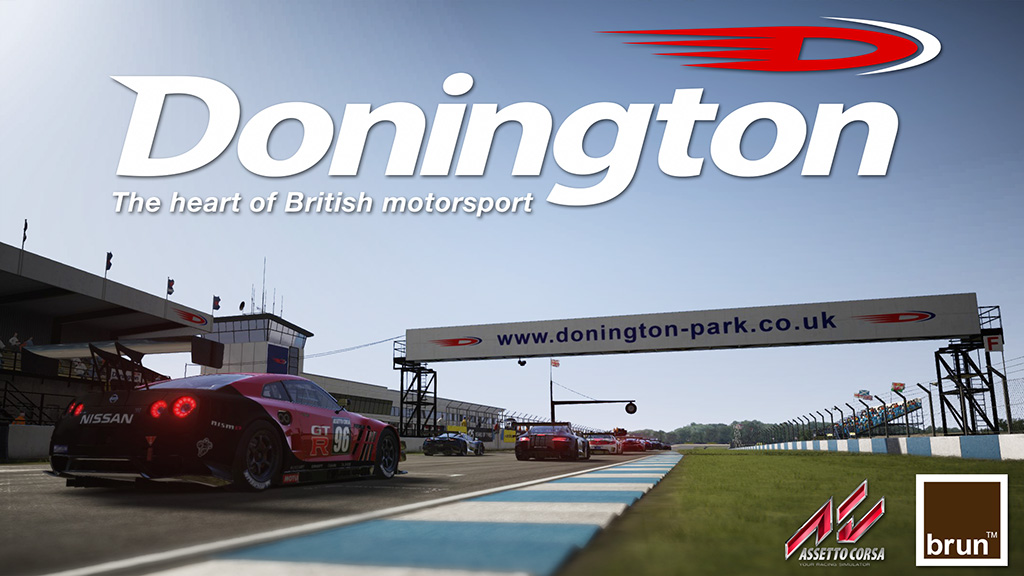 When every detail counts.

Sometimes it is hard to put your finger on why, specifically, you really like or even love something (or someone). This is what happened to me with Donington Park. The first time I drove around this track in a sim was with GTR2. I immediately felt something clicking, and found myself consistently driving pretty much only there. No matter how many tracks there were, and how many more were made by modders with incredible dedication and talent, I could not find anything else that could spark something in me like Donington did. The only other venue that could put some kind of opposition to it was the Swedish Anderstorp circuit. Of course, do not think that I just drove around those two tracks, I raced in all of them present in the game, but Donington was my go to place. Whenever I wanted to try something new, or having just a fun, relaxing race with the AI, or hot lapping for a bit.

You can imagine my delight when I found out, years later, that a smart, resourceful lad called Brun was actually making a scratch made version of the track for Assetto Corsa, which is to this day my most played sim and the one I enjoy the most among the current generation of simracing titles. 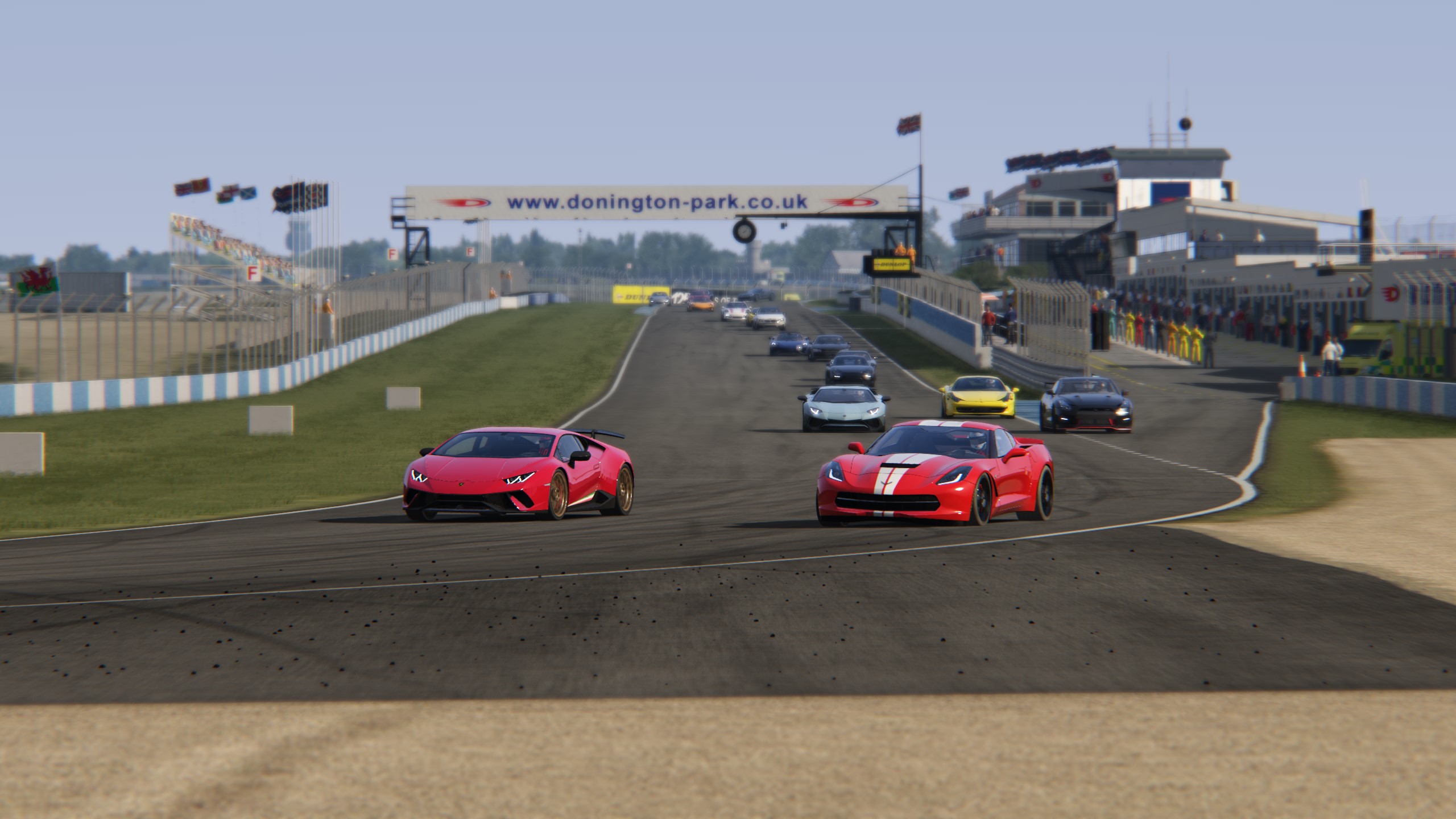 Now, I would lie if I’d say that I jumped aboard right in when the mod was out. Whenever a car or a track is out, I usually don’t immediately drive it/on it. This is not because I am being snob, or because I am excessively sceptical, it is just because I like to see if whoever is behind said mod is dedicated to it. Many times you see very promising works, done by incredibly passionate authors, that just get abandoned after an early release or a couple of minor fixes. I can understand that, enthusiasm wears out quickly. However, I get “sentimentally” involved in mods I like, and whenever something like this happens, I feel somewhat left behind or just fooled in some way. I want to see care.

Brun topped any expectations I could have. Dating the first public release of his Donington Park for AC in mid-2014, he kept working and updating the track relentlessly for more than two years! Yes, there have been gaps between some updates and others, but he just kept coming to it every time with something more, trying to meet people’s expectations and requests. After all, I found out that I am not the only one to be so fond of this beautiful circuit.

The track itself, I mean from a layout point of view, of course takes part of the mod’s merit. You can model an incredibly well detailed kid’s scooter, but there is just so much fun you can have with it, and then it is over. This is a most enjoyable circuit, fast, very technical, it requires precision and quick reflexes to handle some of its fast sweeping corners followed by hard braking sequences. You have to learn the track, know it by heart to get the best out of your lap time and trust me, the learning process is so much fun in itself that you will enjoy every second of it. 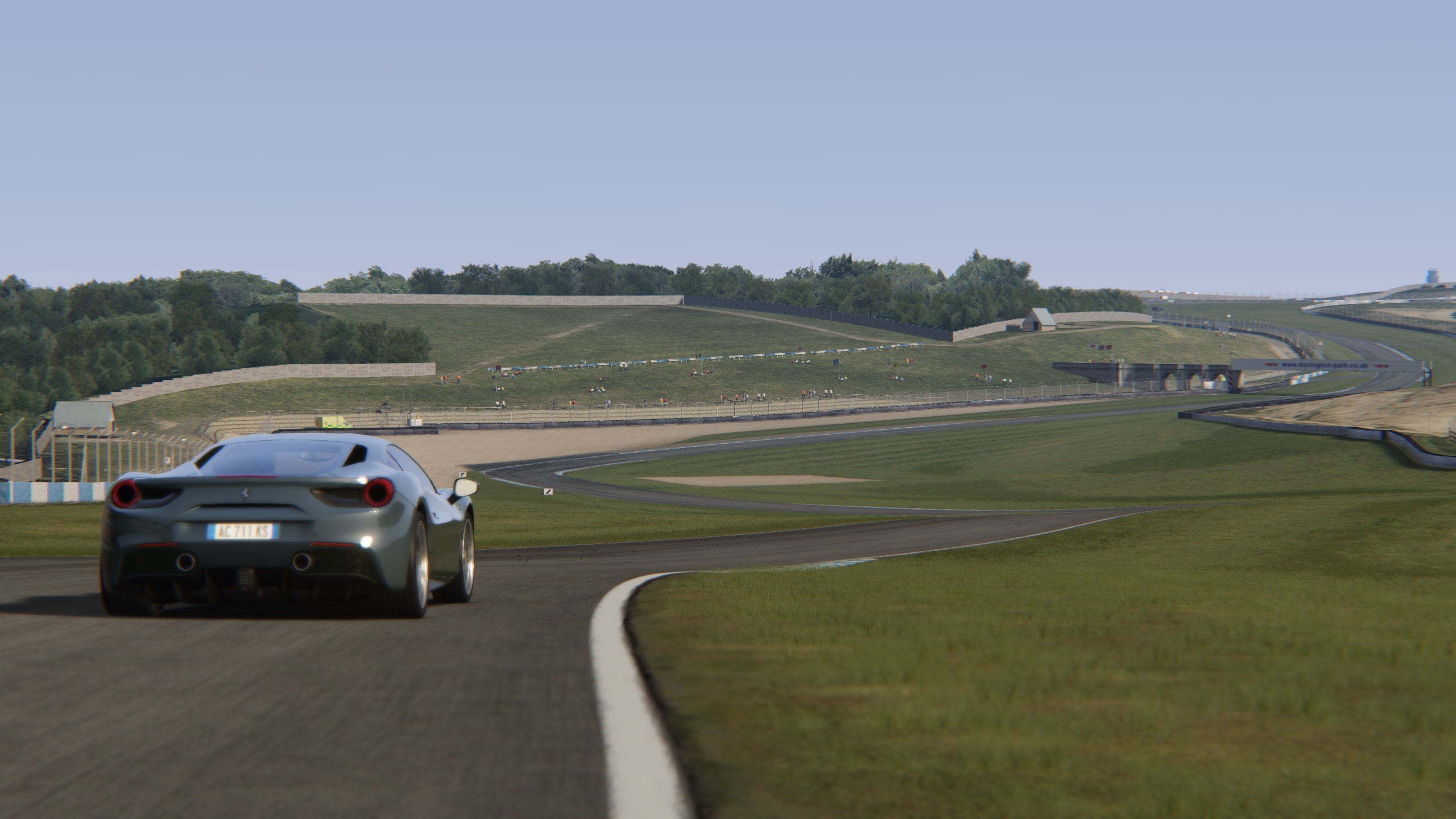 Where is the credit then? What did Brun do to deserve the spotlight? Well, what he did was ‘simply’ raising the bar for track modding quality by a considerable margin. The reason why, stands in the incredible details Brun meticulously put all around the track, leaving no stone unturned. Everything, from the pit area to the grandstands, to the tarmac, kerbs and marbles on the asphalt, all is modelled and textured beautifully. Everything is of outstanding quality and believable. This might sound silly, but a nice little touch I loved and still makes me smile every time are the plane taking off and coming up at the horizon, the jet fighters swooping over, the chimneys smoke in the distance from what it looks like an industrial area. It just adds to the immersion, making the environment feel so vibrant and alive. No track in AC, not even the Kunos ones, give me the same feeling that Donington gives me. It simply makes me happy every time I drive around it. 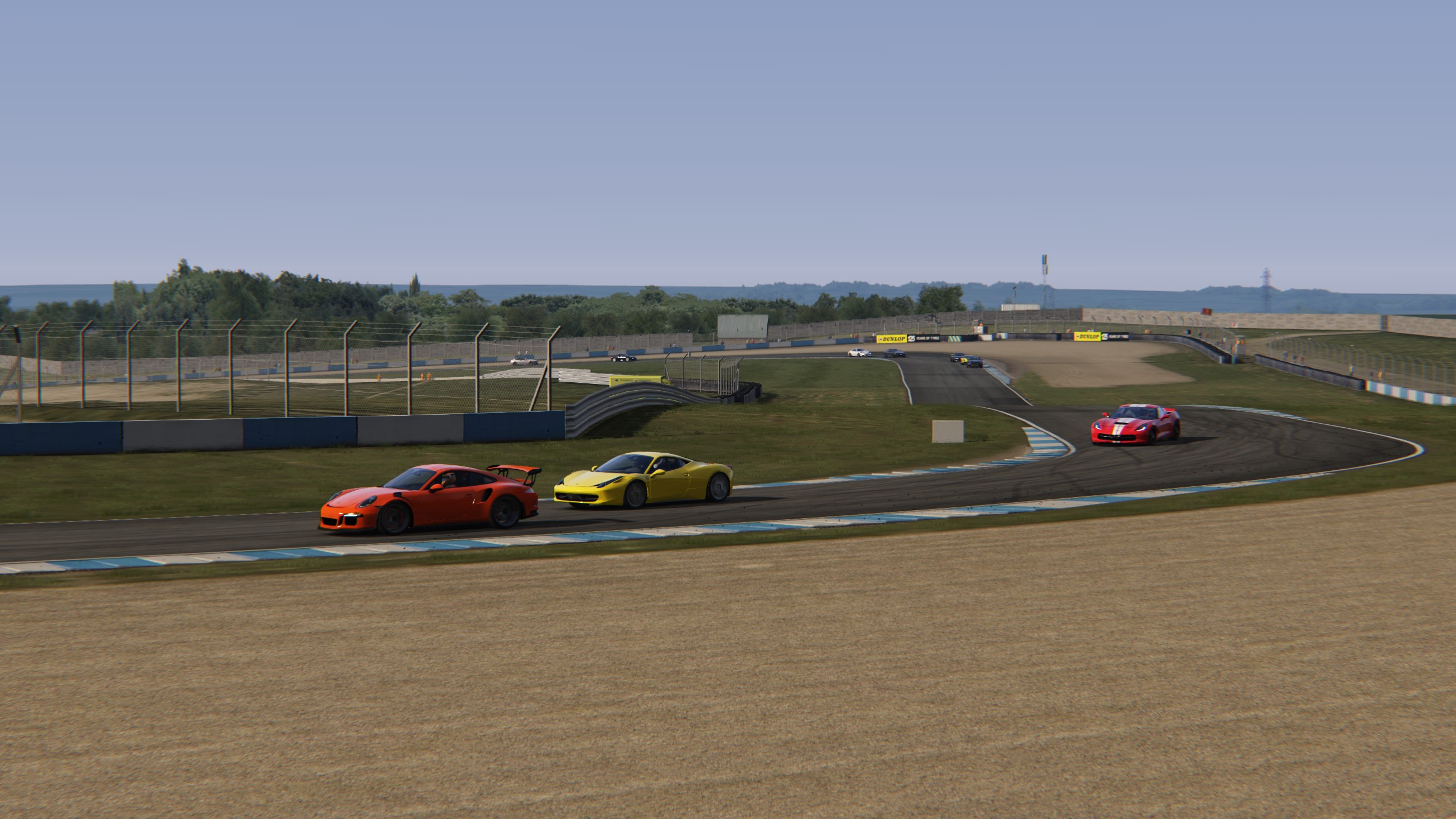 Track accuracy is spot on, with all the elevations (which are half the charm of this venue and the most crucial technical aspect of it) and corners calculated and represented correctly. When developing the mod, Brun had to use topographic map data and study video footage to get as close as possible to the real thing. A few years later down the road, the UK’s government Environment Agency released aerial LiDAR scans of the area to the public and much to the author’s surprise, he found out that he basically already got down to the same result, just so not to need making any further corrections to the track’s layout. Simply amazing.

As if all that hard work wasn’t enough, Brun lately decided to go ahead and make a substantial new update, which will bring an entirely new version of the venue to the public, named “Donington 2018”. At first glance, the most obvious change might seem the recolouring of the kerbs and trackside walls from sky blue to crimson red, due to recent change in track management with MSV (Motorsport Vision Group) now running the circuit. However, you would be very wrong in thinking that it is the only major change. “Donington 2018” features both new and reworked models, new grass textures, new building textures, improved visuals plus some general fixes. It will also feature a new and corrected AI and more accurate cut detection points. Essentially, it is a complete overhaul and I can assure you that it feels like a brand new track. However, if you feel nostalgic, fret not as Brun is also considering bringing these same core upgrades to the ‘older’ Donington with the classic sky blue colouring. 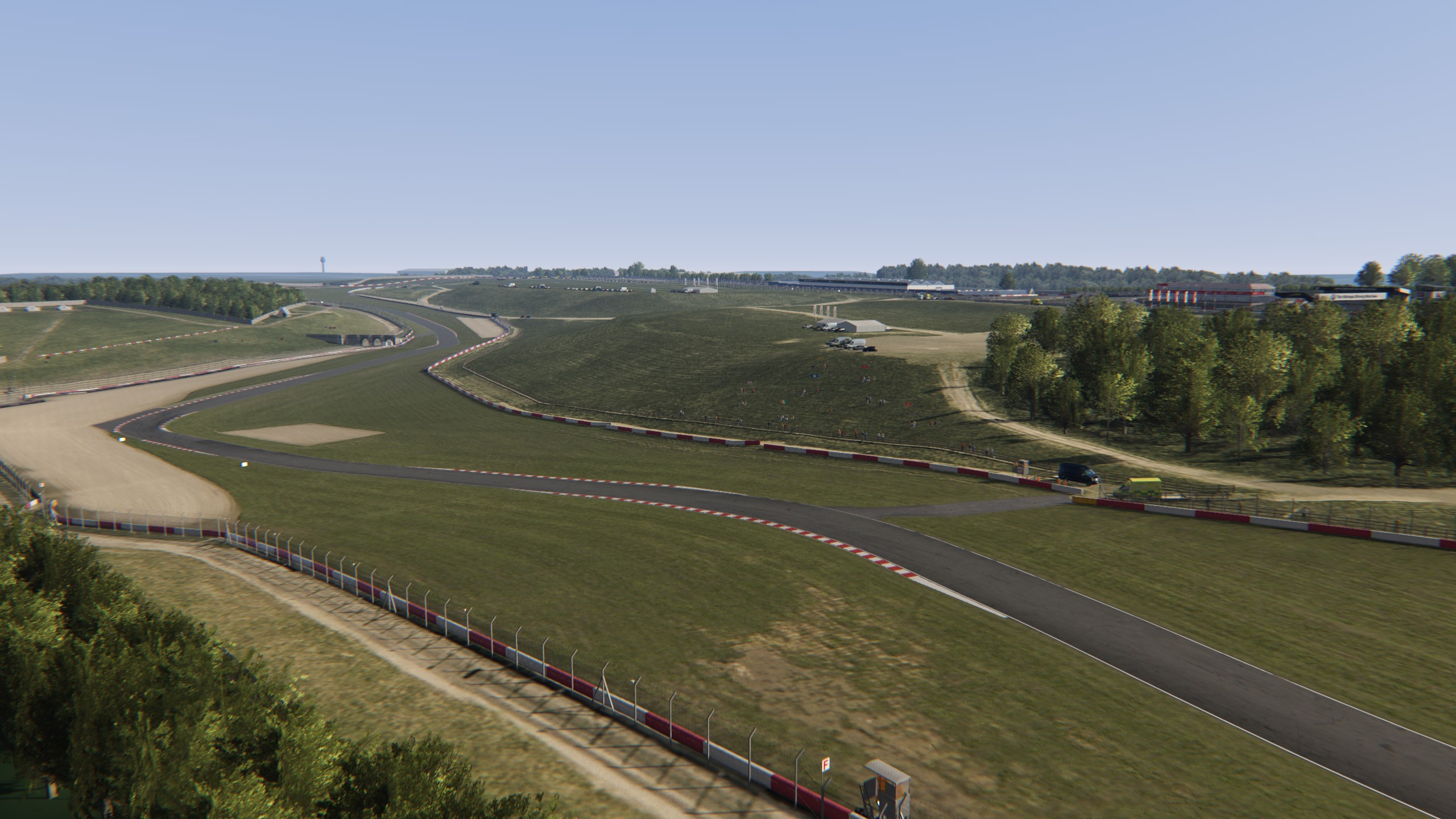 A preview of the new '2018' version​
In conclusion, I could think that I am alone in this, that maybe I might be exaggerating the track’s qualities due to the appreciation I have for the real circuit, but the number of positive ratings, and the fact that it is the most downloaded mod track to date here among the RaceDepartment AC resources, just corroborates my conclusion, I believe. Moreover, a couple of users in the forums have confused it in the past for original Kunos content, which I think says it all, beyond anything more I could possible add.


All pictures and screenshots were kindly provided by Brun. 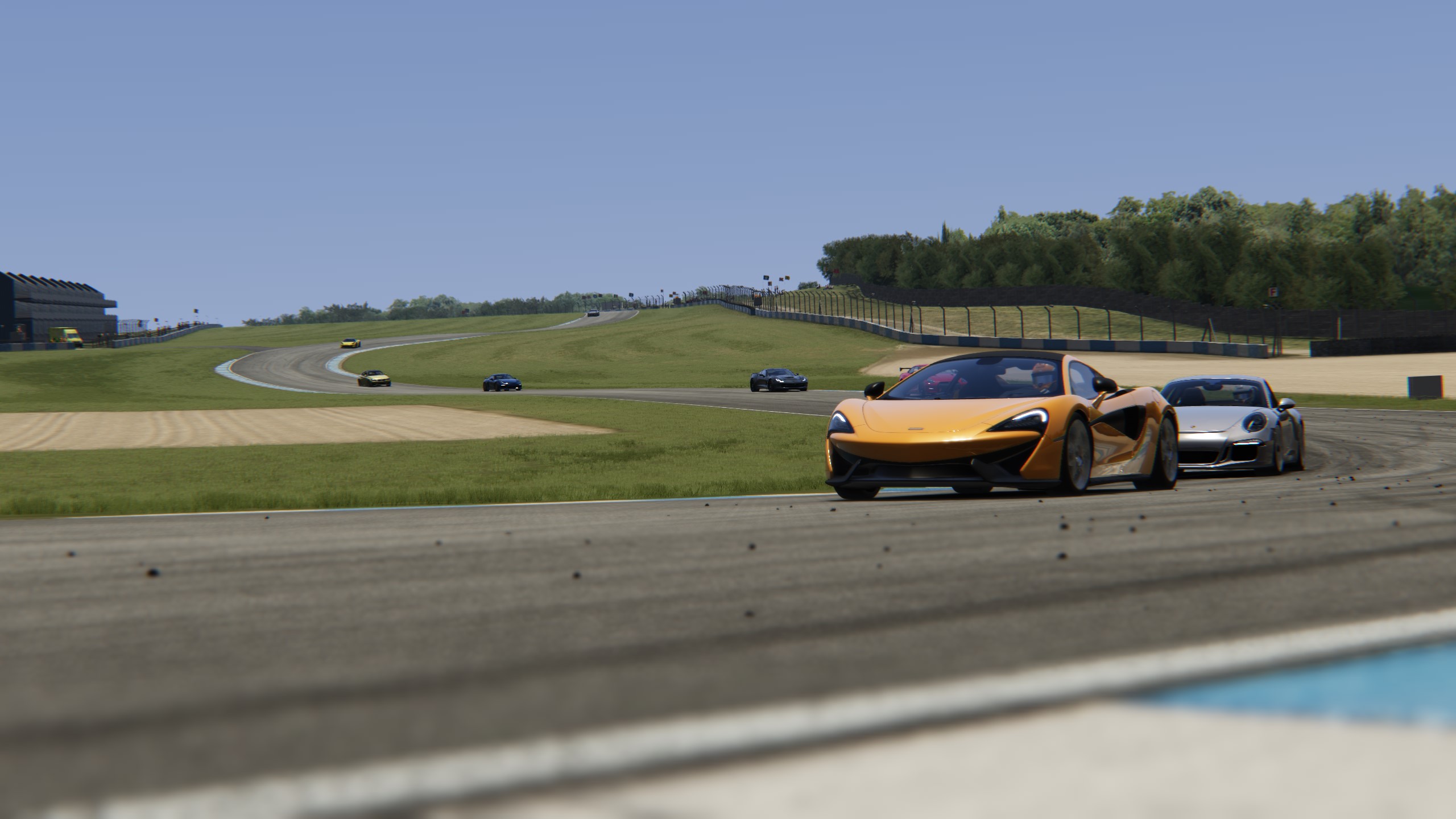 Excellent article and equally as good of a track mod. One of the best in fact.

I know Donny like the back of my hand, I’ve been to the place literally hundreds of times as a spectator and I can say this is one hell of an accurate representation.

Hear Hear. What?? an upgrade to the already amazing and my also go to track, can't wait for this one.

This one is also close to me, as I took my first Pole here in the SRS AussieStig race
Upvote 0

It is pretty amazing that this is still being updated, I used to spend weeks only driving this track, I sorta tapered off of it now for reasons I can't remember but it is one hell of a mod and one hell of a track. I just wish I was 10 minutes away from in real life it like I am with Brands hatch.
Upvote 0

Shaun Clarke said:
Hear Hear. What?? an upgrade to the already amazing and my also go to track, can't wait for this one.

This one is also close to me, as I took my first Pole here in the SRS AussieStig race
Click to expand...

Hey Shaun, Brun posted a link to his new track in the Donington Park 1.15 support thread. Well worth a look to see the beautiful changes.

This track is also my go to track. The attention to detail is superb. VR is especially crisp on this mod. Well done Brun
Upvote 0
L

Love the track, love this version of it.

It's currently on rotation over on SRS, with daily races on it with the equally excellent Nissan Primera.

How much more fun could you have?!
Upvote 0

I'll be trying this out tonight. Donington Park and Okayama International are my favorite tracks.
Upvote 0

Honnestly, at the start I did'nt like this track ( not the mod ). But after a certain time, when you understand the track and is pace...the work you need to do to be fast is rewarding

I find it particularly very difficult whit the Nissan Primera. It took me a while to be comfortable.
But le me tell you! When you got it?
Its so beautiful !!

For me, it's better than several Kunos tracks. I think every modders should use the marbles

I just read an article on the history of Donington. It's held so many racing events throughout it's many years, not to mention huge music festivals. It's good to see it holding the original configuration, a tough one at that.

Great article Leon. Donnington is my favourite track in AC and in real life too (after Cadwell). I have done and still do Motorcycle track days there and love it. On a bike it is fast and wide and quite scary compared to Cadwell but it is thrilling and Brun has done a superb job of the feel and accuracy of the place.
Upvote 0

A fine article about a superb mod. Whenever I drive the track in Assetto Corsa, I think, "I'm on the track at Donington." By which I mean there are no distractions, nothing to disturb the illusion that reality is unfolding on the screen in front of me. What an achievement! Thank you, @Brun.
Upvote 0

Here's to you Brun

Top quality work as we all know. Bring on the Yorkshire nords!
Upvote 0

Oh my, I'm all blushing right now. Not a good look at work.

Many thanks to @leon_90 for the humbling write-up, and everyone else for the kind comments. I'll hopefully get the 2018 version released soon.
Upvote 0

So the latest version is not available here on RD, but we should use that external link mentioned before?
Upvote 0

RaceWasGood said:
So the latest version is not available here on RD, but we should use that external link mentioned before?
Click to expand...

Its not "YET" as Brun said, it's not finished, this is for testing only, and then he will upload it.

L
Problem with the modding on Assetto Corsa