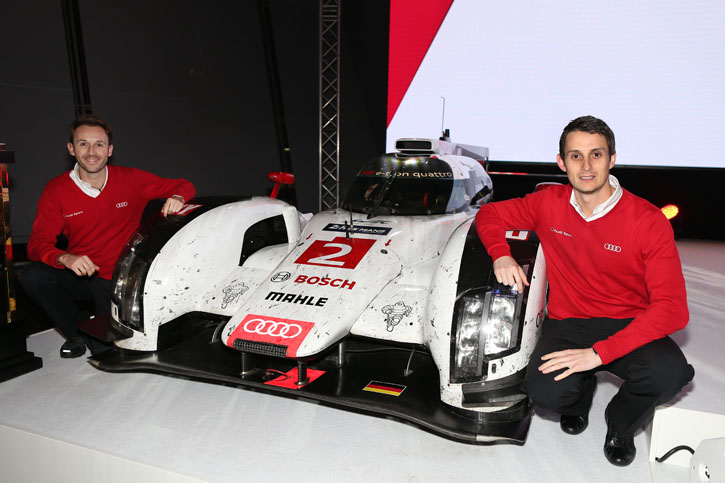 Audi Sport announced it will welcome Rene Rast to their legendary Le Mans squadron, and promote Oliver Jarvis to a full-time WEC role at the Audi Sport Finale held Wednesday in Ingolstadt, Germany.

On an evening where Audi bid one final farewell to the legendary Tom Kristensen, presenting the retiring nine-time 24 Hours of Le Mans winner with his very own Audi R18 e-tron Quattro as a parting gift for his service, and celebrated their remarkable accomplishments over the last twelve months - including their victory at the 24 Hours of Le Mans and fifteen GT championships across the globe - the speculation of who would fill the seemingly unsealable void left by the retired Great Dane's departure was finally settled. 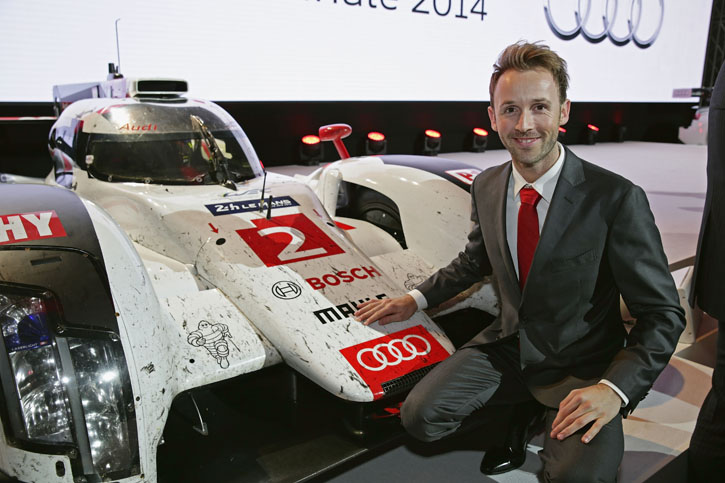 Rene Rast will race for Audi Sport Team Joest in the 2015 24 Hours of Le Mans, driving the team's third of three R18 e-tron Quattro prototypes, which the 28-year-old German will share with Marco Bonanomi and Filipe Albuquerque. Rast had a banner year for Audi in 2014. He claimed overall victory in the two biggest 24 hour races for GT cars - winning the 24 Hours of Nurburgring for Phoenix Racing in June, and then following that up with overall victory in the Total 24 Hours of Spa in July, for Belgian Audi Club Team WRT.

In his first 24 Hours of Le Mans appearance, Rast helped push Sebastien Loeb Racing to an eighth place overall result (fourth in LMP2 class). He also won the 2014 ADAC GT Masters Championship, finished 5th in the Liqui-Moly Bathurst 12 Hour race, took a race victory in the Championship Race in the Blancpain Sprint Series' third round at Zandvoort, and was previously a triple champion of the Porsche Supercup (2010-12) and twice won the Porsche Carrera Cup Germany (2008, 2012).

Rast is also an avid sim racer, who has helped to promote Slightly Mad Studios' upcoming title Project CARS, demonstrating the sim's potential for delivering an authentic sim racing experience by sharing several videos on his YouTube channel of him training for races using various builds of Project CARS - tackling tracks such as Le Mans, Spa-Francorchamps, Road America, and Oschersleben in virtual recreations of cars such as his Audi R8 LMS Ultra that served him so faithfully in 2014.


Audi's driver slot alongside Brazilian driver Lucas Di Grassi and Frenchman Loic Duval will be occupied for the full 2015 FIA World Endurance Championship season by British driver Oliver Jarvis. The 30-year-old Cambridge native has driven for Audi for the last three years at Le Mans, scoring two podium finishes in 2012 and 2013, but retiring early from last year's race. This year, Jarvis competed in the Autobacs Super GT Series, driving for Lexus Team SARD in the new Lexus RC-F sporting the team's familiar Denso livery, alongside Japanese veteran Hiroaki Ishiura. Together, they recorded five top-10 finishes in 2014, but finished only 13th in the GT500 championship. 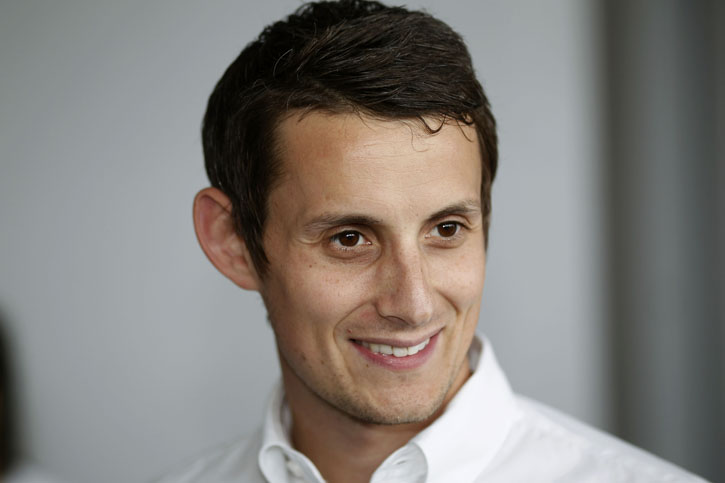 Jarvis, along with former series champions Duval, Andre Lotterer, and Benoit Treluyer, and even the departed Kristensen are all alumni of the Super GT Series and its predecessor, the All-Japan Grand Touring Car Championship. “I’ve got some big shoes to fill in replacing Tom [Kristensen], a nine-time winner at Le Mans and last year’s world sportscar champion, but I look forward to rising to the challenge. I joined Audi in 2008 and raced in DTM but it was always my dream to compete at Le Mans which I fulfilled in 2012. But to now contest the full WEC championship and fight for a world title is just amazing and something I strived to achieve,” Jarvis commented during the event.

Jarvis is a former champion of the Formula Renault UK Series (2005), and in 2007 he won both the prestigious Formula 3 Macau Grand Prix and the Super GT 1000km Suzuka race. He competed from 2008 to 2011 as an Audi DTM driver, before moving up to represent the manufacturer at Le Mans and the championship now operating as the Blancpain Sprint Series. 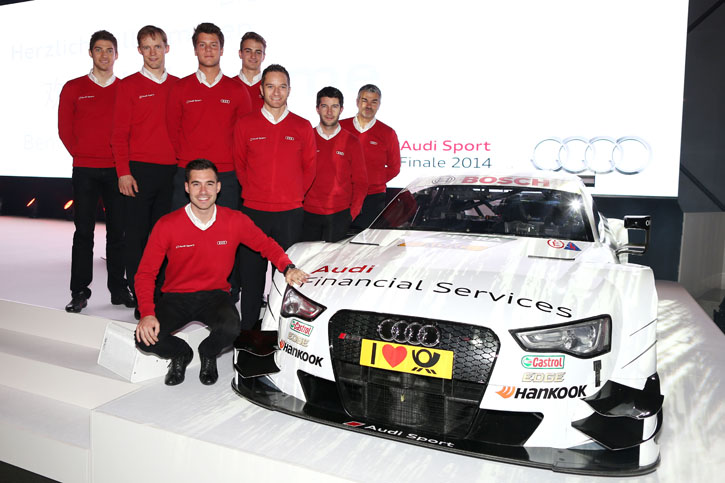 The announcements for next year didn't stop there, as Audi also confirmed that it will keep its 2014 driver lineup in the Deutsche Tourenwagen Masters series as is for the 2015 season. Once again, the RS5 DTM's bid for total victory in the DTM will be led by former two-time DTM champions Mattias Ekstrom (the only Audi driver to win a race in 2014) and Timo Scheider, as well as 2013 DTM champion Mike Rockenfeller. Veteran Jamie Green will return to contest his eleventh season in the category, while Audi's nucleus of young talent stays on board as well: Edoardo Mortara, Miguel Molina, Adrien Tambay, and last year's rookie challenger Nico Muller all return for 2015. The arrangement of Audi's drivers amongst their three DTM squads - Team Abt Sportsline, Team Phoenix, and Team Rosberg, however, has yet to be confirmed. 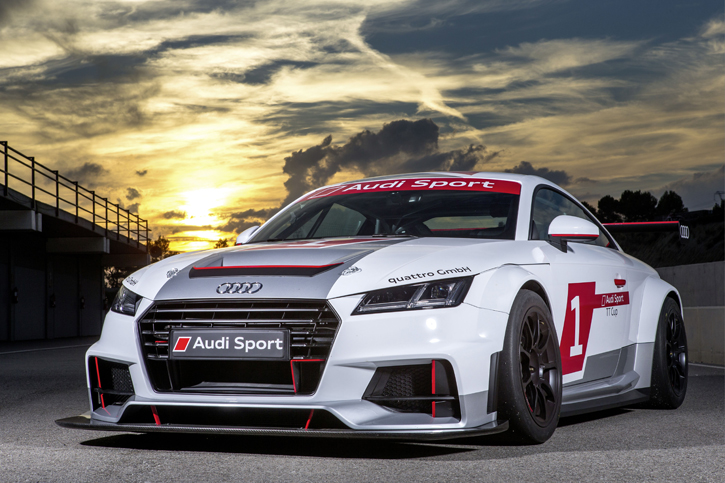 In addition, Audi also announced the brand-new, six race Audi Sport TT Cup that will run as a support series to the DTM in select rounds in Germany. The new one-make championship will award its champion a promotion to represent Audi's GT program around the globe the following year, and 165 drivers have applied to enter - but only eighteen will make the starting grid when the series kicks off during the opening weekend of the DTM season, held May 2-3 at the Hockenheimring.

31 · From Chattanooga, TN, USA
Freelance voice actor, RD Motorsport Writer, and enthusiast of way, way too many things.
You must log in or register to reply here.