Rhys Gardiner provides a summary of Season 1 of the American Touring Car Championship, RaceDepartment's most competitive league ever...

~~~
​
It all started way back in December 2008. Warren Dawes, a founding member of RaceDepartment, and a friend, William Yunck, posted a race thread in the GTR Evolution Racing Club - “STCC @ Knutstorp”. Eleven people signed up for the event, including such names as Keith Barrick, Eric Kaczmarek and Lu Chan. Marty Pierce won the first race, Yves Larose won the second. It was a bunch of guys testing a ping issue between US, European and Australian connections, while having a good race at the same time. It was a bit of harmless fun...


But no-one could have been prepared for what that small event set in motion.


Within the next year, the races continued, experiencing all the highs and all the lows. The true low point was when an event at Jyllandsringen only got a few signups, but went ahead. But the true highs were to come in mid-2009, when the weekly events' popularity suddenly exploded, thanks mainly to the efforts of Keith Barrick. Signups had grown from eight to ten individuals to full grids of 25 cars – a few events even ran with the 30-car server mod (without much success of course). The “Friday Night Races”, as they became known, were some of the most highly-regarded races on RaceDepartment, renowned for their clean, consistent driving and exciting battles all throughout the field.


But the races reached their zenith when Keith Barrick announced that, with the help of Jarrod Keen, Eric Kaczmarek and Rhys Gardiner, the Friday races would morph into a RaceDepartment-supported league: The American Touring Car Championship. The first race in a league environment was to be held at the Mosport circuit in Canada, the first in an eight-round series, to be concluded at the NASCAR layout of the Watkins Glen circuit. All tracks except one, Mugello, were located in America, helping to give the league its name.


And now, the first season is over. But we've all had the most fun we've ever had with our clothes on in the progress, and we have many fond memories of what was an excellent first season for RD's youngest Touring Car league.


Round 1 at Mosport Raceway set the perfect stage for what was to be an exciting league. The flowing curves of the Canadian circuit played host to close, hard battles, with Keith Barrick claiming pole, winning both races and taking the championship lead early on. His friend, and closest rival at the time – and as it would turn out, throughout the season – Brandon Lawson, struggled with consistency, and would finish the round lower than expected.


But Brandon would turn his fortunes around at Round 2, held at Edmonton City Airport. The Indycar and former Champ Car track seemed just right for Lawson's Peugeot 407, the Canadian taking victory in both races. Rhys Gardiner, who had suffered horrid luck at Mosport, also had an excellent turn-around, taking P2 in the second race. It seemed to Barrick, who had elected to pull aside at the start and fight through the field, that his championship lead was being threatened already.


And so it seemed, indeed. Round 3 was held at the beautiful Mugello circuit in Italy, and due to a laps miscalculation, turned out to be the longest event of the season – both races lasting half an hour each. Some drivers could not wait for the chequered flag to be waved. Brandon Lawson again took the round win, but not by pure domination; in fact, he won only one race of the two. But with this, he usurped the championship lead from Keith Barrick, who took honours in Race 1.


Round 4 went back over the other side of the pond, to the sportscar course Lime Rock Park in Connecticut. This track is known for being notoriously short and twisty, and even in the comparatively slow Super 2000 Touring Cars, sub-1-minute lap times were the norm. Abdul Ahmed, for whom Lime Rock is a truly “Amehzing” track, managed to take pole position and the Race 1 win, with Team Synaptic's Adam Vaughan reaching the top step in Race 2, in an event which had some of the most incredible battles ever witnessed. Eric Nelson, who laps at this track in real life, took a well-deserved third place in the second race.


When the ATCC circus came to Houston, Texas, for the fifth round of the league, just seven points separated Barrick and Lawson, now 1st and 2nd respectively. The tight but short street circuit at Reliant Park played host to two exciting, controversial races, with many retirements and dented quarter panels. Of note was the terrible luck of the two Championship frontruners, Barrick and Lawson – the former qualifying terribly and rolling his car in race 1, the latter not being able to gel with the track and quitting. Adam Vaughan had the opposite happen to him, taking both race wins.


In the intermission between this round and the next, the unthinkable happened behind the scenes. Eric Kaczmarek, the man responsible for setting up the servers and keeping the scoring, found to his horror that the database he had created for the league had accidentally been wiped out by his web-hosting service. Nevertheless, he and the race directors soldiered on, recovering all of the previous results and putting them up on a temporary GPCOS account. Thanks to Eric, Keith and Jarrod for saving our standings!


Vaughan seemed to be on a roll when the field travelled to the Mid America Motorplex's D-curve layout for Round 6. Something unforeseen happened during the event: a bug that involved the timing and the strange location of the track's pit lane resulted in everyone (even the then leaders) finishing a lap down from Yves Larose. It would have seemed to an outsider that the BMW lover had won both races, but in reality it was Vincent Kan in Race 1, and Adam Vaughan in Race 2 who took the spoils of victory. The results were edited accordingly by our treasured Admin, Eric Kaczmarek.


When Round 7 came around, the Friday racers found themselves in the realm of make-believe. Tracks, that is. The marquee round of the season took place at the fictional KW Superspeedway, a banked oval converted to the game platform by RD's very own Andrew Evans. There was drafting, bumping, rubbin' and crashes aplenty in this fast-paced tribute to NASCAR racing. Lawson and Barrick, who when younger had played NASCAR sims together 'till the cows came home, dominated the event – the former winning Race 1, the latter Race 2. It was to be a tight conclusion to the championship when the field left KWS for upstate New York.


Yes, you know what track I'm talking about. The NASCAR layout of Watkins Glen International hosted the final round of ATCC. The biggest surprise of the round was Rhys Gardiner, who shocked even himself by taking pole position in the under-used Volvo S60. The races saw Gardiner suffer his usual Mark Webber-like luck, and Saul Boucher take his first ATCC win in Race 2. It was also where the title was decided, because Keith Barrick took a well-deserved championship win from Brandon Lawson. The gap to Lawson, who ended up 2nd overall, was 81 points, bringing to an end a very exciting and fun league season.


The only competitor to both compete and score points in every single race held throughout the season, Keith's consistency, freakishly fast driving and gentlemanly behaviour is to be admired. Congratulations to Mr. Barrick for his driver's title, and a big Thank You to all competitors in ATCC Season 1. We here at race control send our regards to you, and our thanks for your clean, consistent, fair driving; you guys are the best field we have ever seen. Every one of the competitors in ATCC deserves a medal for bringing something new and interesting to the league and upholding our competitive but fun and friendly atmosphere.
No need to cry, friends, for bigger and better things are planned for Season 2 of the ATCC, to begin on January 8. Till then, it's back to the Racing club for some old-school fun! Cheers for the racing, and see you all in 2010!

NOTE: If you find any inconsistencies and/or errors contained in this article, please do not hesitate to contact Rhys Gardiner through RD's private messaging system.

Rhys what was an excellent review. 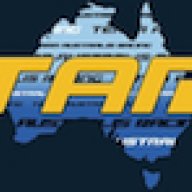 Thank you Rhys! Great review and a great season

Anybody wanting to get into Club or League racing should join us for Season 2. This is a great place to start, friendly helpful people and excellent competition at many different skill levels.

Good On YA RHYS!

This is a very well written review Rhys, well done, you clearly put a lot of time and effort into it. :good:

Well done to Keith for his planning, organisation, and dedication to making this League a huge success. Congratulations for the deserving League win too mate. :handshake:

Great article Rhys!! Thank you for the read!!

Looks like the 1st season was a success. WD to Keith for his Championship and all the other winners and competitors who took part.
R

Fantastic review Rhys, makes it feel like its the real deal!
G