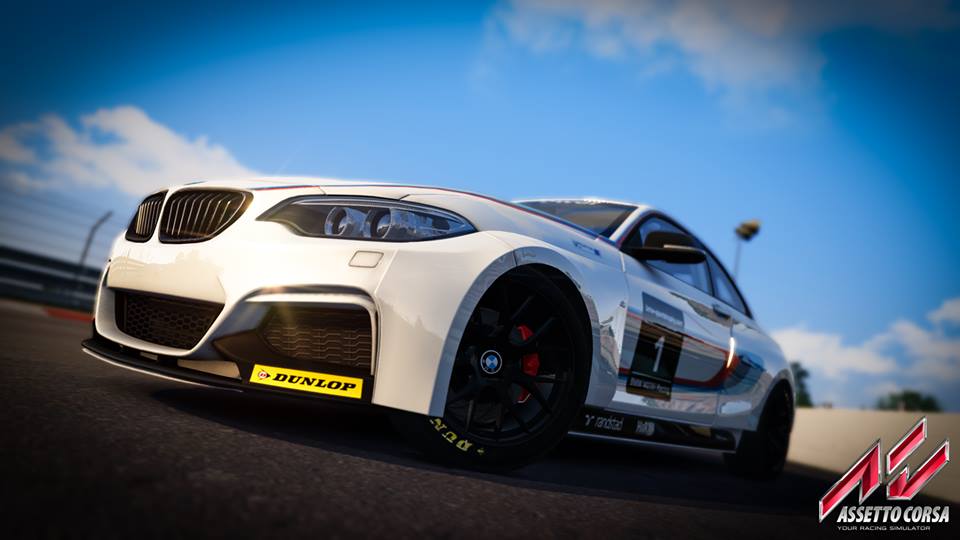 Kunos Simulazione has released some new in-game screenshots of the soon to come BMW M235i Racing, which will be included in the Dream Pack DLC for their popular Windows PC racing simulator Assetto Corsa.

The Italian developers mentioned the following on their game's Facebook page:


"We introduce you the new BMW M235i Racing, that will be included in the Dream Pack currently under final development and betatesting. The first additional pack will come with some updates of the main build of Assetto Corsa and will introduce some new features, improving also the existing code. Other details will be revealed once the scheduled process will be completed and tested."​
The M235i Racing is powered by the most powerful petrol engine developed for a BMW M Performance Automobile to date. The twin turbo, inline six-cylinder engine cranks out 333HP (245kW). That shouldn't scare off the beginner drivers, however, thanks to motorsport-specific driving aids - ABS, DSC and traction control make the car easy to tame, even on the ever challenging Nordschleife.


"The exceptionally efficient yet forgiving handling, is a perfect match for the Nurburgring Nordschleife and the car already delivers laptimes on part with much more developed racing cars. The BMW M235i Racing is the perfect car to learn the demanding track for beginners and a mighty weapon for a full racing attack." said Kunos.​
Personally, I'm quiet excited to get more news of the Dream Pack DLC. This car, among others, will certainly add a lot of great content, not to mention the astonishing Nurburgring Nordschleife. Assetto Corsa promises to have a large content selection, with something for everyone. So far, it appears that is exactly what the sim will bring.

wow...a more interesting beamer than I expected when first announced. Start with revealing this and end with a P1 or F1 trailer at the Nords. It must be fun to be a marketer at Kunos. #goldenageofsimracing

However I'd like to learn a bit more about the timeline when league tools will be available. Are they coming with this update as well? We have been patiently waiting now for months but I am impatiently wanting to race in our series that are still parked in a pitbox because the game isn't ready for it.

Well the preview (or two of then) more or less reveals, that we will have the 24h layout which is pretty big news to me.

I'd ask for them to add a BMW Sauber F1 car to the pack but I cant help but worry that BMW would just take it off after a couple years because they got bored.

9 more car previews, one-a-week - dlc could be out mid march!

I would like to see more open wheelers in AC. The ones they have are very fun to drive.

Premium
Just watched an onboard lap of this thing around the ring. Holy jeeze! It's practically as quick as a GT car!
It looks beautiful and it's quick too! Can't wait!

i really hope you're just kidding with your statement
could it really be that long?!

Tim Meuris said:
i really hope you're just kidding with your statement
could it really be that long?!
Click to expand...

Not sure why he might think that we're going to get a car preview once per week for the next 9 weeks. I'd love to see a source of that if it is true, but he's most probably being pessimistic for the sake being pessimistic.

I'm betting it'll come at some stage in February.

4WD please and thank you

Looks great! Around how much would the DLC cost?

Joel Locsin said:
Looks great! Around how much would the DLC cost?
Click to expand...

Kunos haven't announced a price yet, so your guess is as good as mine.

The M235i race car is a proper 24h racing customer car. There are a bunch of them running right now in the Dubai 24 hours.

I guess it's in line with their statement here: http://www.assettocorsa.net/assetto-corsa-1-0-is-out-now/
"One journey ends, another begins ; version 1.0 by no means indicates the end Assetto Corsa development, on the contrary, this is now just the beginning of a long journey. The development team is already working on new cars, tracks, features and content that will improve the Assetto Corsa experience even more. As a preview of what to expect, take 50 of the most highly anticipated sport cars and five new tracks, all produced and released as official licensed content in 2015, either in DLC packs or as free bonus content."
Last edited: Jan 10, 2015
You must log in or register to reply here.