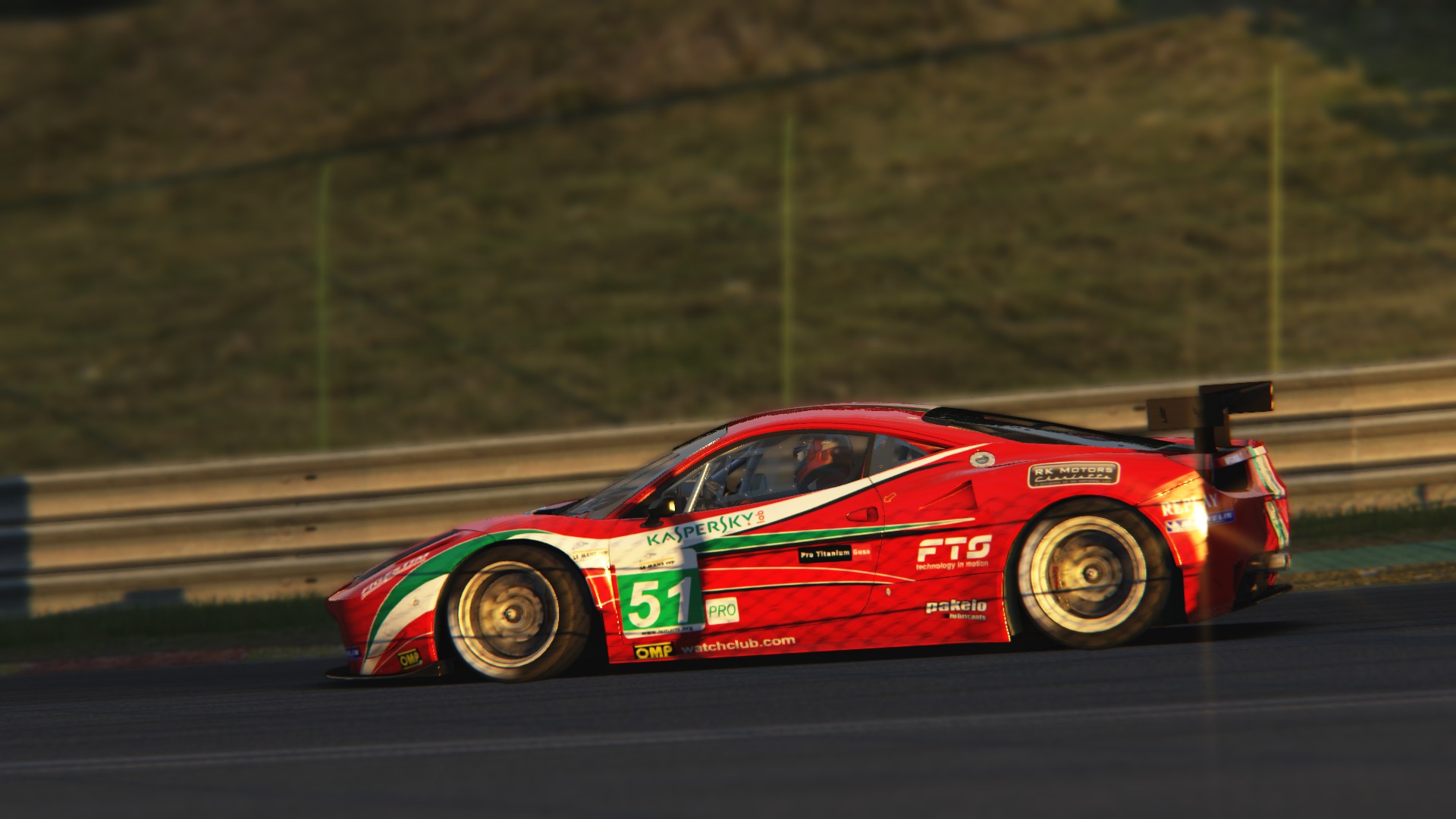 This update signifies the end of the Early Access period in which Assetto Corsa was developed in, with help from the simracing community for the past 12 months or so.

/help: prints the list of the available commands
/admin: become administrator for the server. ex, if the password is "kunos" the command is "/admin kunos"
/next_session: moves to next session
/restart_session: restart the session
/kick: kick a user using the rules (blacklist etc) of the server. To kick a player named "The Player": /kick The Player

- GT2 and GT3 cars, F.Abarth, Exos and Exos S1, M3 E30 GrA and DTM have now the modified tyre model
- LaFerrari has modified active aero and tyre model
- BMW M3 E30 street car has modified tyres (all compounds) as an example of street tyres new model.
- GT2 and GT3 cars have now the "old" FFB gain settings in their physics. Obviously the min FFB slider still works on them too. Please try and report back
- Zonda R, Huayra, 599XX have now tyres that are more load sensitive and more speed sensitive. Laptimes should be slower. Please give feedback on driving feel. Keep in mind you're going to be slower, give it some time.
- Minimum FF force implemented. Can provoke STRONG vibrations in the center zone, use as low as possible!
- All cars have new FF gain values to eliminate FF clipping. You might need to raise your FF gain values on your configuration or add a bit of minimum. Advice 0.12 for logitech wheels, much lower for other wheels. Experiment and report on beta forums
- Difficulty level slider on career
- Much more laps possible on single player quick and weekend races when fuel consuption is off
- Added diffuser stall on low speed for tatuus formula Abarth.

New Information:
Version 1.0 signifies not just the long-term achievement but also a new start. The hugely successful Early Access program is now complete thanks to the contribution of hundreds of thousands of gamers. If you have joined the Early Access program, we are pleased to announce that version 1.0 is available for you as free upgrade.

With the completion of our version 1.0 milestone, Assetto Corsa is now leaving Early Access status, and is available from Steam right now.

RaceDepartment still has a limited amount of copies left for the early access prize of 34,99 Euro:
http://www.racedepartment.com/downloads/pc-assetto-corsa.2172/

The new version includes an extended career with fully blown championship series’, new features, improved gameplay, new sound sets and sound effects, new and improved post-processing effects as well as several optimizations, including some important refinements in the physics department, an updated tyre model and force feedback guaranteeing an even better driving experience. Assetto Corsa 1.0 introduces also the new Alfa Romeo Giulietta 2014 Launch Edition, available as free bonus content and the sought after Ruf Yellowbird which will be available once again as free bonus content by the end of the year; when available, the game will be updated automatically on Steam.

One journey ends, another begins ; version 1.0 by no means indicates the end Assetto Corsa development, on the contrary, this is now just the beginning of a long journey. The development team is already working on new cars, tracks, features and content that will improve the Assetto Corsa experience even more. As a preview of what to expect, take 50 of the most highly anticipated sport cars and five new tracks, all produced and released as official licensed content in 2015, either in DLC packs or as free bonus content.

What are you waiting for? See you on track!

Since 2011, the dev team have welcomed the New Year by making a very important announcement –this year is no different!

Premium
Hey mate didnt you see the post in the Donnington thread??
Last edited by a moderator: Dec 19, 2014

Only saw it just now. You get the credit for being the first one to realise the update happened.

Justin Talent said:
Only saw it just now. You get the credit for being the first one to realise the update happened.
Click to expand...

Not wanting that mate. Just glad we are all interested in keeping each other in the loop. Good to be part of a great bunch of racers!!

awesome, cant wait to get a few laps in later tonight when I get home

here is a little program that will determine the min FFB setting for your wheel (it says it is for iracing but it works fine for AC also):
https://mega.co.nz/#!hc4XDSqZ!RDZynAyOA3c9mOPw3-Q10YyN3sqb6sfkEm7uGhfhUR8

Michael Hornbuckle said:
here is a little program that will determine the min FFB setting for your wheel (it says it is for iracing but it works fine for AC also):
https://mega.co.nz/#!hc4XDSqZ!RDZynAyOA3c9mOPw3-Q10YyN3sqb6sfkEm7uGhfhUR8
Click to expand...

Really looking forward to this update!

Downloading now...and looking forward to driving that Yellow bird at Spa and Nords at the end of the year. Thx.

Michael Hornbuckle said:
here is a little program that will determine the min FFB setting for your wheel (it says it is for iracing but it works fine for AC also):
https://mega.co.nz/#!hc4XDSqZ!RDZynAyOA3c9mOPw3-Q10YyN3sqb6sfkEm7uGhfhUR8
Click to expand...

Thanks for the link. Havent used it and I have no iRacing. I see "Min force" in the drop down list, but I cant seem to find the result and I cant find any docu. Can someone give me a hint?

Frederic Schornstein said:
Thanks for the link. Havent used it and I have no iRacing. I see "Min force" in the drop down list, but I cant seem to find the result and I cant find any docu. Can someone give me a hint?
Click to expand...

It outputs a csv which you import into Excel to make a chart. This thread has all the info in it:-

They didn't include the promised street corvette and gtr... Also, still no animation on the braking and accelerating, animation on the up and downshift still goes in the same direction... no fixing of the paddle shifting...

Tr3voRR said:
They didn't include the promised street corvette and gtr...
Click to expand...

Those are "free DLC post-1.0" as far as I know... they did announce the Yellowbird's coming soon(tm), so we'll probably hear about the other free DLC when it's ready to go.

Did they "fix" the gamepad steering?

Still get the stupid 5 second penalty when the retarded AI or a 1st turn hero in MP knock me off the track and I am still not trusted to enable first gear before the lights go green!

Are there not enough people complaining about this or does Kunos just not give a crap?

At least the 95% cpu occupancy issue seems to be fixed. Nope. Jumped the gun on that one.

I am so glad I got this POS most amazing and excellent racing sim that will save us all on a Steam 50% off sale.
Last edited: Dec 20, 2014
R

You can turn those penalties of, can't you?

Requiem84 said:
You can turn those penalties of, can't you?
Click to expand...

Indeed, but you can see from the tone and content of that post that it is not about being constructive and looking for solution but only about trolling and ranting.
@David Cordell if you do not like AC, why not spend your precious time playing another SIM? Or are they all POS as you wrote?
Do not waste your time replying to me, I will not see your posts anymore.
You must log in or register to reply here.

Looking for collaboration on a new type of league