Another strong weekend at Silverstone

Precision maintained the championship leads by winning two out of three races on the renewed Silverstone track.


In World Series Cyril Werdmuller and Mattias Stahre settled for second row in qualifying which secured a relatively strong position to attack in the race. After an early battle with Jeffrey Rietveld Werdmuller and Stahre climbed up to the front during the first pit stops. Stahre slowly but safely increased the gap to Werdmuller, whereas Marco Conti was catching the both. Eventually Stahre finished in a copybook victory, but due to technical file submission issues the Swede was later disqualified harshly. A podium from Werdmuller and fifth place from Gosling nevertheless secured the team's position in the championship fight. 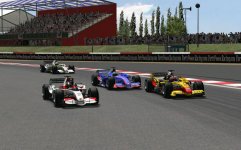 World Trophy saw championship leader Pedro Melim take his first pole of the career, which already meant the Portuguese would be difficult to beat in the race. After holding on the lead in the start, Melim had an easy job of keeping in top, as the only threat turned out to be a driver using illegal cheats, who in spite of this couldn't keep up with Melim's pace. After the chequered flag had waved, Melim finished in a dominant victory with a 51-second gap to the second placed driver. Emre Uysal finished 5th to carry home more points, while Ajibola Lawal again was forced to retire due to a pedal problem in formation lap. 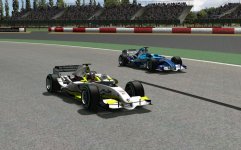 World Championship saw a less stunning qualifying effort, although Bono Huis secured another front row next to Bruno Marques. In the race the Dutch remained within distance to Marques during the first stint, and somewhat surprisingly managed to take the lead during the second. After Greco leapfrogging both Marques and Huis during the second stops, Huis had to make yet another pass, which he managed on lap 38 after a mistake from Greco. This meant Huis would finish in his second straight victory and fifth top 2 finish in the last five races, furthermore strengthening his championship lead.
Jaakko Mikkonen drove another consistent race to finish fifth and keeping up in the fight for the top 3 spots. Ronny Hähnel took seventh after struggling with tire wear in the last laps, while Rasmus Tali drove into ninth in a race compromised by a damaged car and less optimal health. 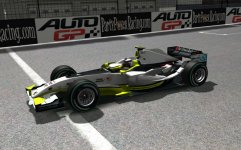 The circus moves to Hockenheim where the 11th race of the season is to be held in the coming weekend, followed by the holiday break. Stay tuned and follow our progress during the weekend through the usual social media.

Ondrej Kuncman, Precision Motorsports team manager commented:
"We had anticipated a very difficult weekend, but other teams made it relatively easy for us. Bono`s win was special not only because Twister had better pace, it was also a symbolic win that pretty much describes our season - not winning races on raw pace with best setups, but winning thanks to brilliant preparation in other areas. Mattias proved it too. Unfortunately he was DQ, but that's the rules and we have taken more precautions to make sure nothing like this ever happens again. Silverstone was the last really high speed track so from now on things should go a bit easier for us."

Bono Huis (1st) commented:
"I didn't expect to win here, and that makes this win even better! I thought our pace wasn't that good, as we saw in quali Twister was faster. But I could keep up with them in the race, actually I think I was faster in the first stint but I decided to stay behind Bruno to make a gap to the rest. Bruno and Greco pitted really early, I couldn't do that because the tyres wouldn't last long enough in the 2nd stint. So I had to do 2 more laps, I pushed like hell to try to stay infront of Greco but then I made a silly mistake in the pits and lost quite a lot of time and came out behind them. In the 2nd stint I passed them both but Greco pitted earlier again and he passed me. So then I was just waiting for the last few laps until Greco suddenly made a mistake and I got through. The last 10 laps I pushed like crazy to keep the gap to Bruno, but I knew if I didn't make any mistake he wouldn't pass me. Very very happy with this win, didn't expect it at all."

Jaakko Mikkonen (5th) commented:
"I did a personal best in qualifying but sadly it was enough for 9th place only.
I started the race carefully and overtook I think one driver. After that I was mostly stuck behind other cars. It's very difficult to pass cars in front who have also slipstream of the car in front of them, so I tried to be smart and attack later or when I thought I won't get overtaken from behind. I managed to pass some drivers and found myself later from 5th place. Not too bad but not awesome either."

Cyril Werdmuller (3rd) commented:
"Before the race I knew my racepace wasn't that good as I had not enough time to practice. Anyways I was surprissed that I could drive my personal best time during the qualification which gave me p3 on the starting grid.
The race went quit well for me. I even took the lead in the first stint but it was obvious that my racepace wasn't good enough. I tried everything to defend the lead but in the end it wasn't enough. After that I lost some more places.
It was very enjoyable and fair race with nice battles going on whole the way. In the end I finished on the 4th place which I'm really pleased with."

Pedro Melim (1st) commented:
"What a weekend! After such a hard week on testing and struggling to get on pace I managed to go to the qualify session and grab pole by 0.024 s. I went to the race confident, but after first lap I saw that Sergio was quite fast. He spun some laps into the race which gave me some breathing space, but after some more laps his engine blew. From then on I was managing the tyres, engine and gap to the second place. Overall a great weekend for me since I achieved my first pole of the year and my sixth victory and got the fastest lap of the race as well. A great weekend for the team also since we got two victories in such a difficult circuit. I want to thank John-Eric Saxen for his help on this GP in the car setup and also to the team manager Ondrej Kuncman for being my race engineer on Sunday."

Emre Uysal (5th) commented:
"Some accidents during the race, but the car could handle it very well finishing in 5th. There was enough pace in the car which was again a good achievement by the team thanks to good coordination by its managers.
Again a good weekend for PM finishing first in all divisions. A little break then get back to hard work again aiming for podium spot."