After months of researching composite seat options and chasing Craigslist, Facebook, and Ebay offerings all over the U.S., I FINALLY purchased a fiberglass fixed bucket seat last weekend in anticipation of installing four Dayton exciters and one or two Buttkicker Mini LFEs. 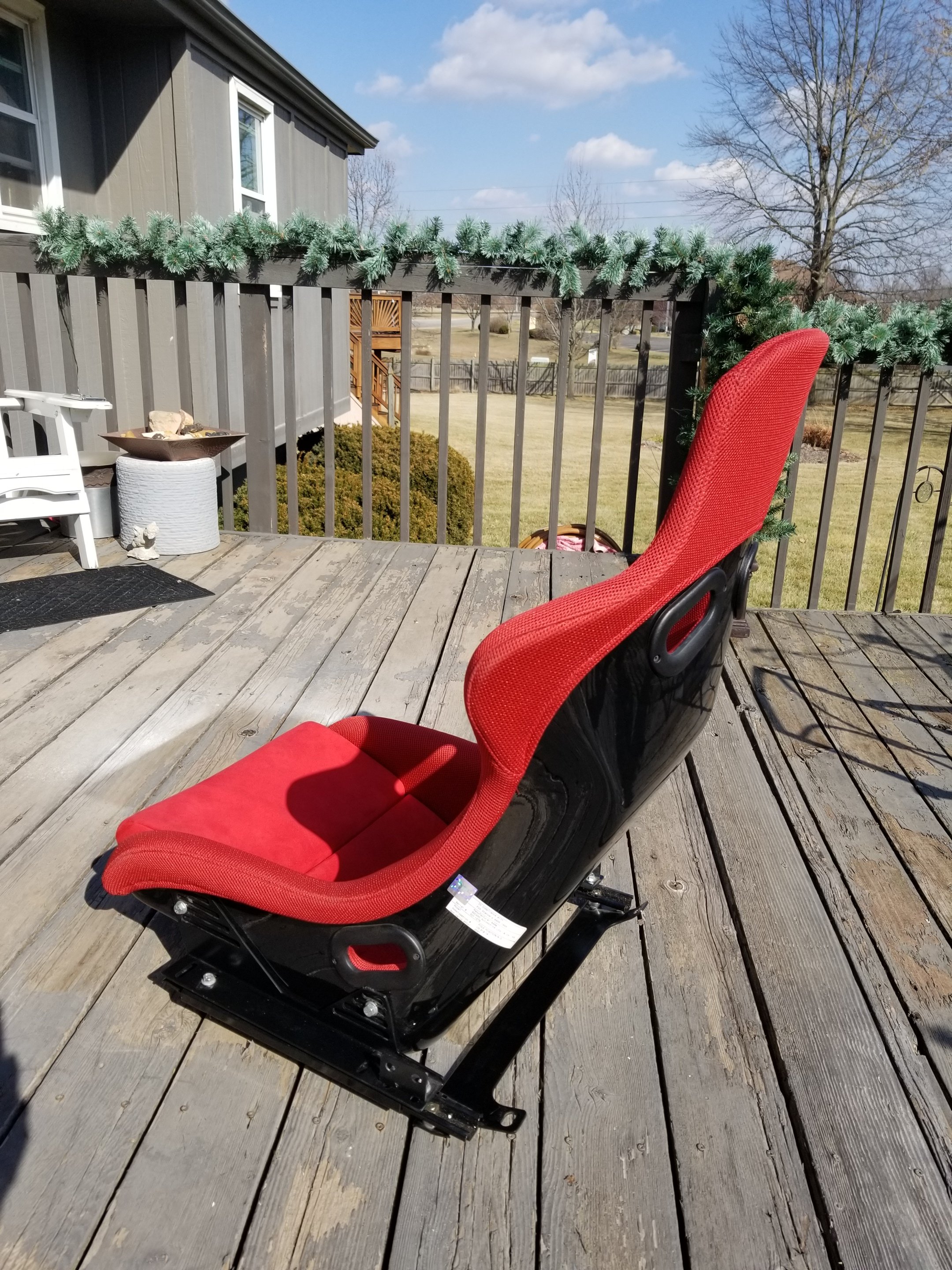 The Facebook poster openly stated the mount, slider and cheap universal side mount brackets were bent. I regarded the existing brackets and sliders as bonuses as I had already a front-rear adjustment option (more on that it another future post.) and the good seat price made new brackets less of a burden. Upon pickup, I discovered the brackets were bent in multiple dimensions but persisted in trying to make them work at least temporarily.

While the multiple bracket bolt slots offer seemingly good adjustability, they only allowed my particular seat to be mounted in an upright position. I am 6'2" with a long torso and long legs and I have been looking for ample thigh support. I find I am better able to place my posterior flush with the seat back when the seat is laid back 25-30 degrees. Counterinuitively, the layback also allows me to bring my torso slightly forward as the side wings of the seat impinge on my shoulders.

Furthermore, the soft 30 durometer isolators limit the extent to which the seat bolts may be tightened. Because of this, I could not tighten the bolts enough to prevent the bolts from moving front-rear in the long bolt slots in the universal brackets. Therefore, slotted side mount brackets, while looking cool, may present a structural issue for those pursuing a tactile build.

I used the cheap brackets to test fit QTY:4 Isolate It! sorbothane washers required to isolate tactile effects applied to the seat from other portions of the rig. (I sourced the 4-pack p/n 0510050-30-4 from Amazon for $25.)

I bought four 40 mm L M8 button head socket bolts at Menard's (one of the absolute best home improvement stores anywhere and a name recognizable to fans of IndyCar, NASCAR, and title sponsor of the ARCA series) to replace the short flanged hex bolts that came with the seat. I added four small hole washers at the bolt head and four 1.5-in dia. stainless steel fender (UK: "wing"?) washers to contain each bushing laterally. 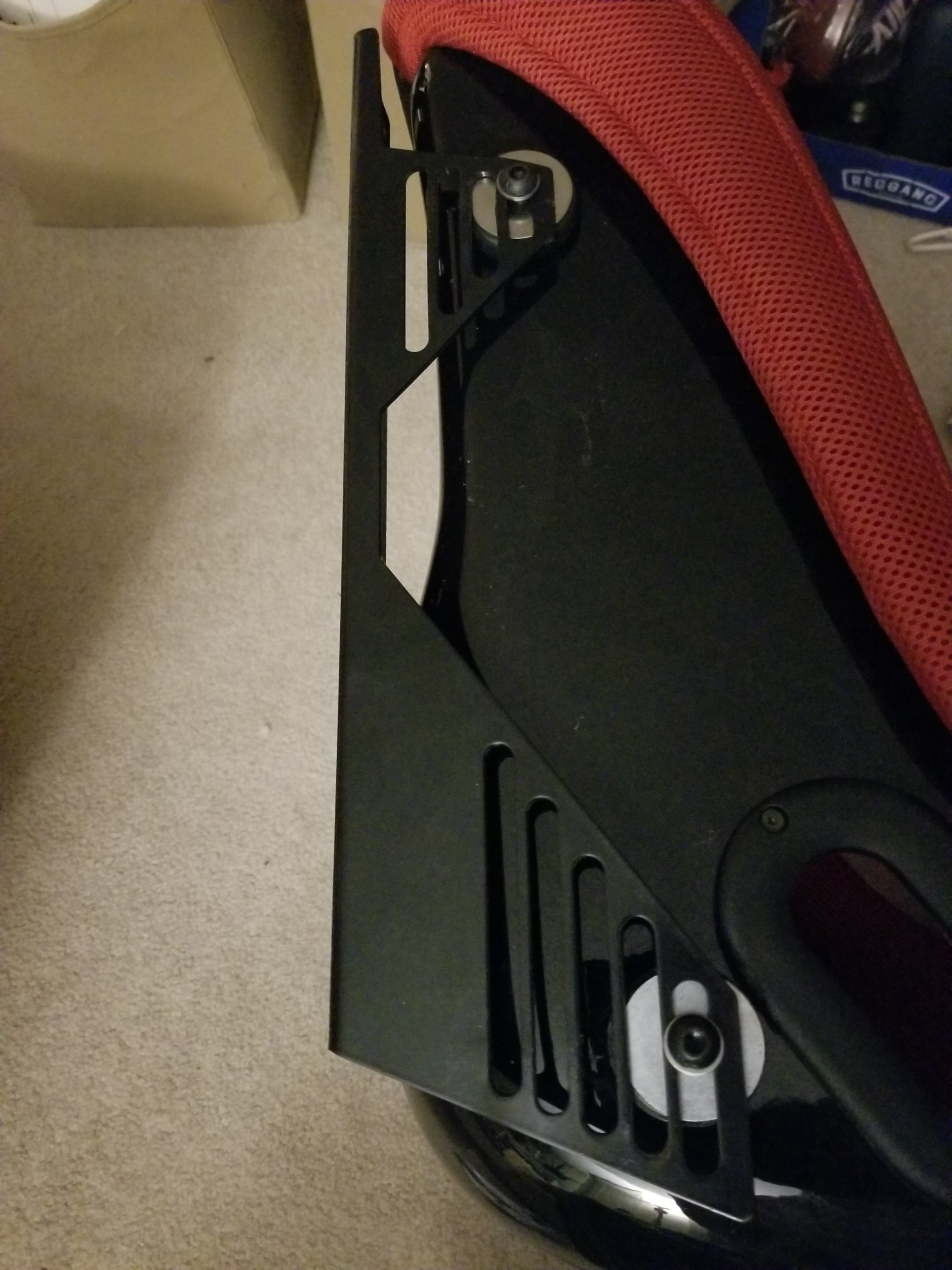 I Went a Little Nuts

Concerned about the sticky soft sorbothane bushings potentially attacking the gel coat of the fiberglass seat, I made four shims from a sturdy black plastic lid (from a container of mixed nuts from Aldi!). I traced the circumference and inner hole of a fender washer with a silver Sharpie marker and cut around the marks with a sharp Xacto knife. Because of extensive bushing compression and outward deformation, I did not concern myself with matching the outer diameter of the washer precisely. Additionally, perfect roundness need not be a concern because the shims are nearly fully hidden by the bulging bushing. 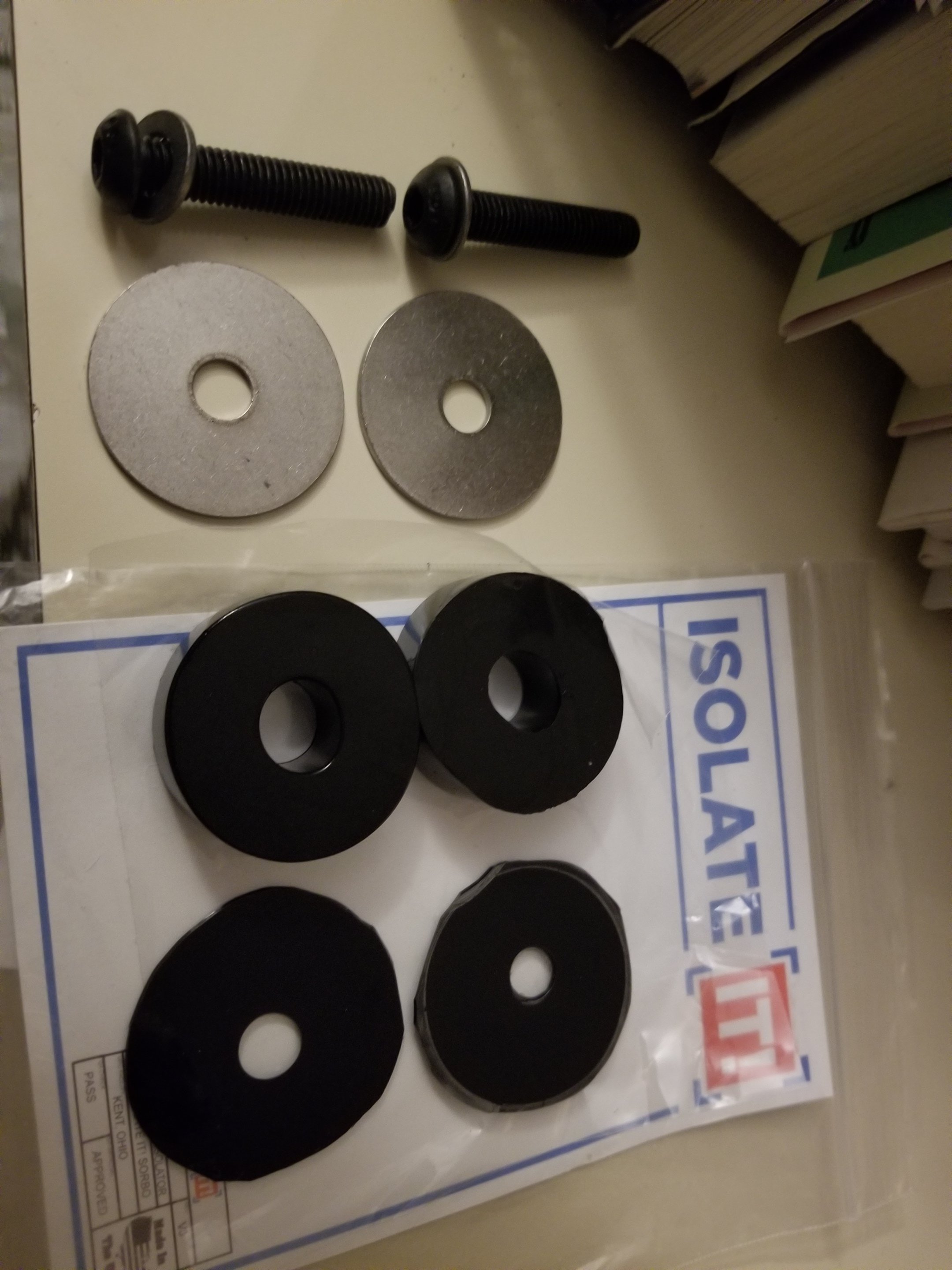 I knew I would require tall (approx. 5-in to 6-in) brackets to acheive the amount of layback I want. Before plunking down anywhere from $30 for another set of no-name brackets to $150 for a tall, multi-hole brand name (Sparco, OMP, Sabelt, Recaro, etc.) brackets, I had been brainstorming all week about potential bracket options I already have. 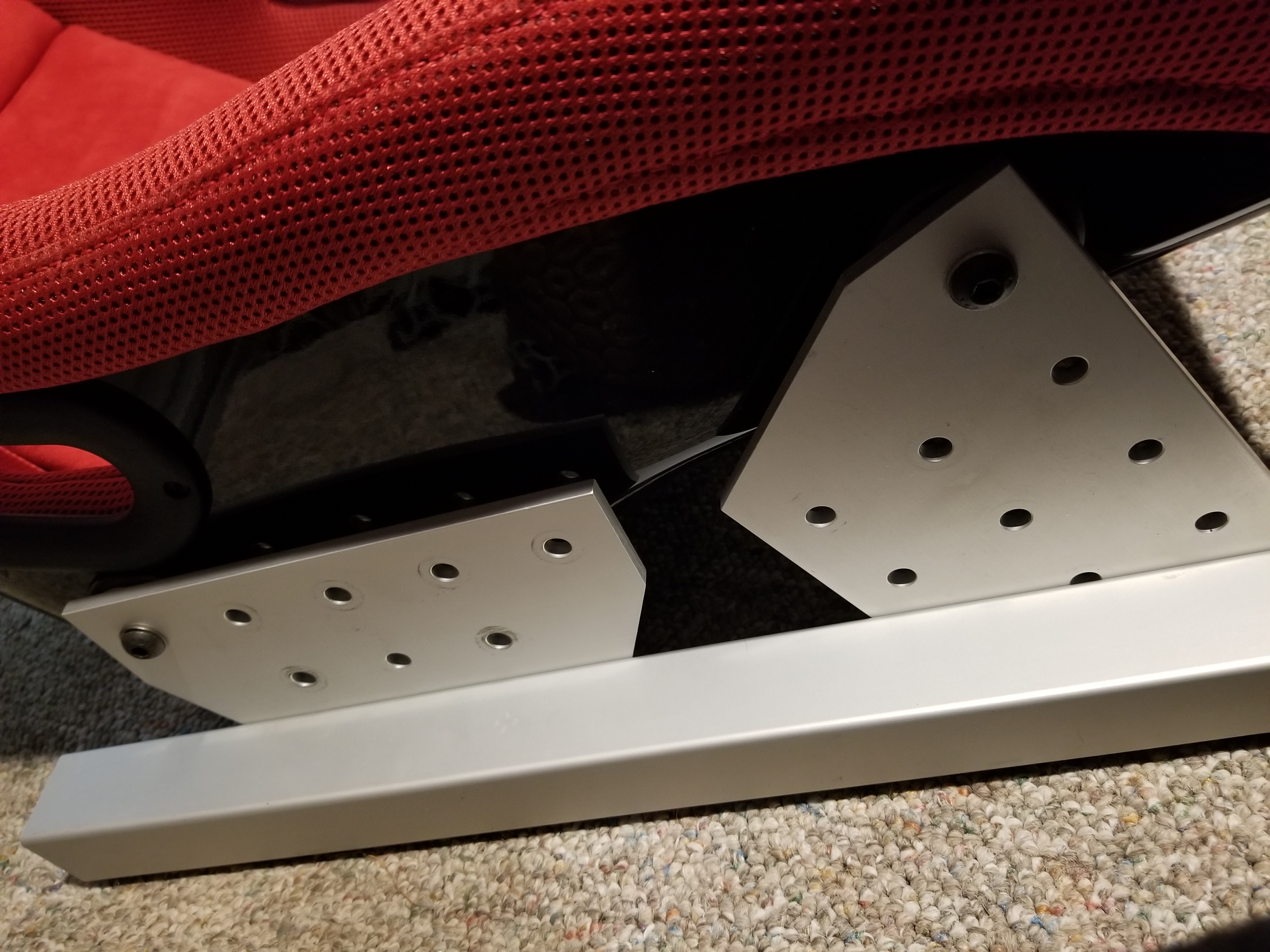 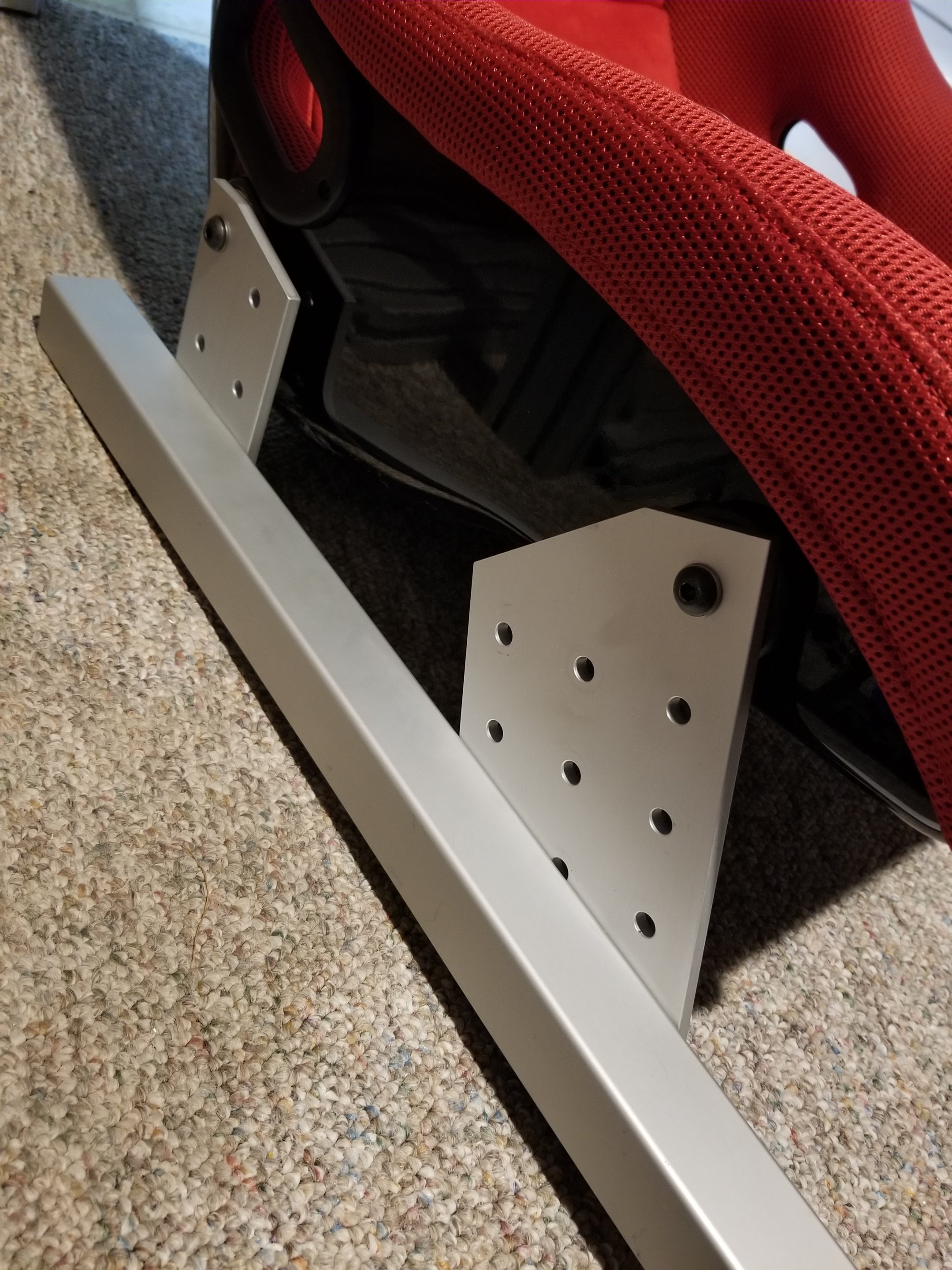 *NOTICE: Most manufacturer built sim rigs and most non-U.S. DIY builders utilize 80/20 40-series (40 mm x 40 mm) extrusions. I have found MOST single-hole 15-series angle brackets can be used with 40-series brackets and vice versa. However, when multiple slots are used as with flat joining plates, the spacing difference between metric and fractional series parts may present a compatibility issue.

Budget tip: Occasionally, used or factory blemished plates and brackets appear on the 80/20 Garage Sale on eBay. Often these parts are nearly indiscernible from new.

I have a half dozen of heavy duty steel all terrain vehicle (ATV) winch plates (Harbor Freight Item # 62445) that I have purchased from cut-rate tool importer Harbor Freight thinking I could somehow use them on my 80/20 rig. I have used the plates to mock up pedal plates and wheel decks, but had not found any of the uses to my liking. 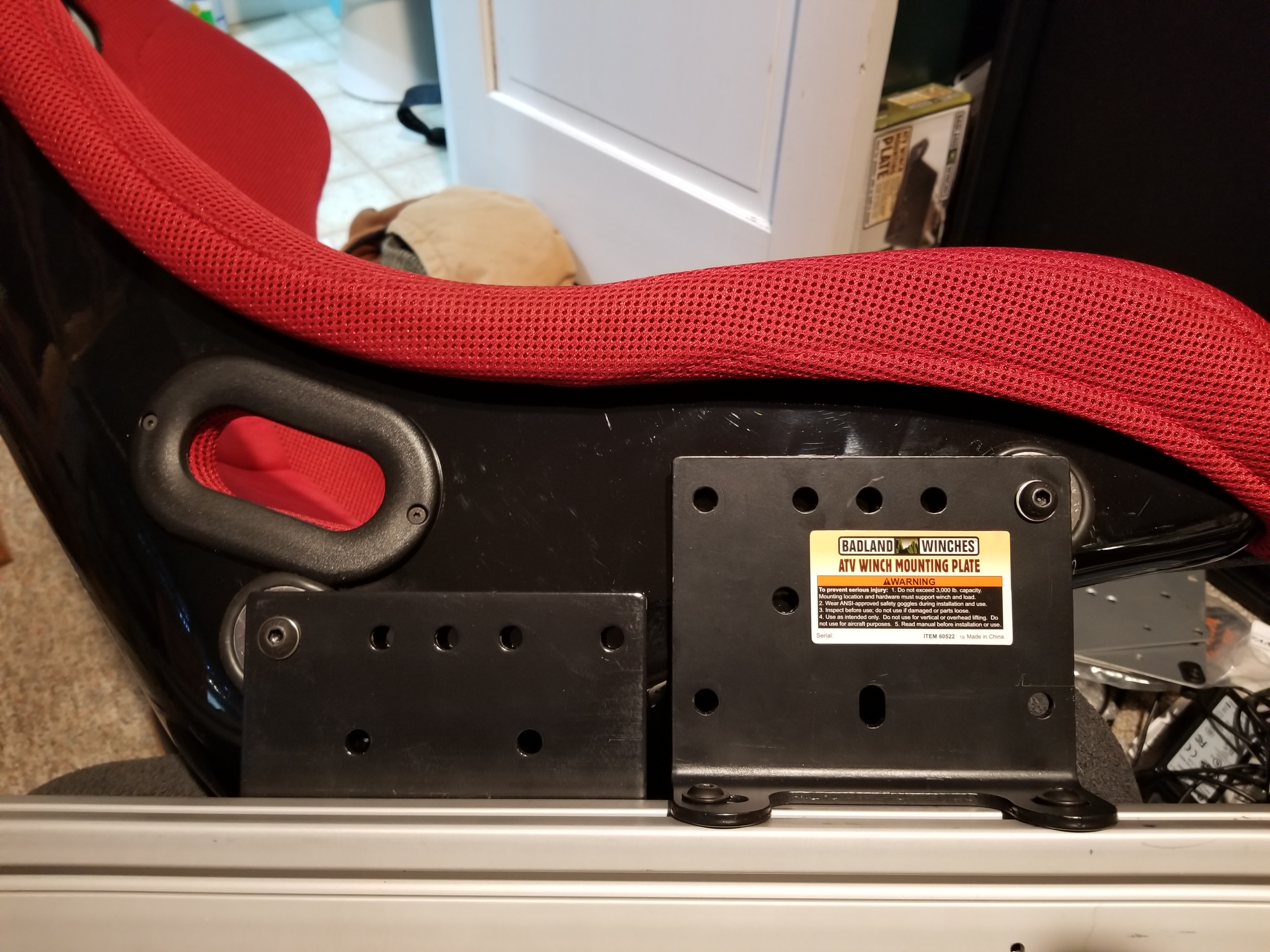 I found by mounting one winch plate to the top slot of a 1530 (1.5-in x 3.0-in) extrusion and the other plate to the upper inside T-slot I could achieve a desireable seat layback angle. 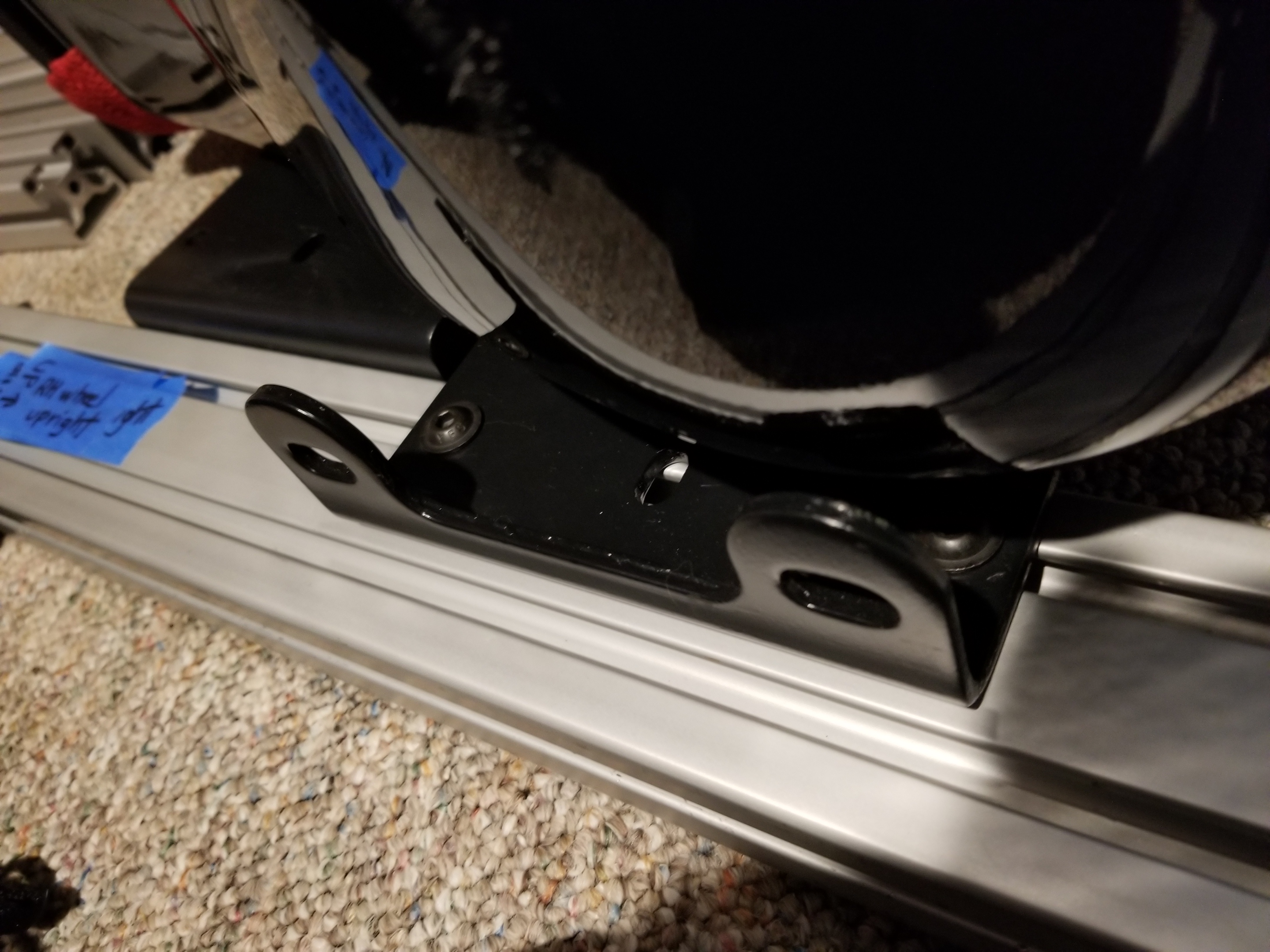 The layback angle of the seat acheived when mounted using the Harbor Freight brackets is a little more than the 80/20 plate option and I actually prefer it.

On the other hand, the 80/20 joining plates are more aestheically pleasing and marginally easier to access bolts for installation and adjustments. On yet other hand, the edges of the 80/20 plates, while not "sharp" could gouge an unwary seat occupant during ingress or egress. Additionally, the 11-hole plates I have on hand are overkill for my application.

Completion of my new sim rig build is still a few weeks off. I may. Meanwhile, Autumn thinks she has a comfy new throne: 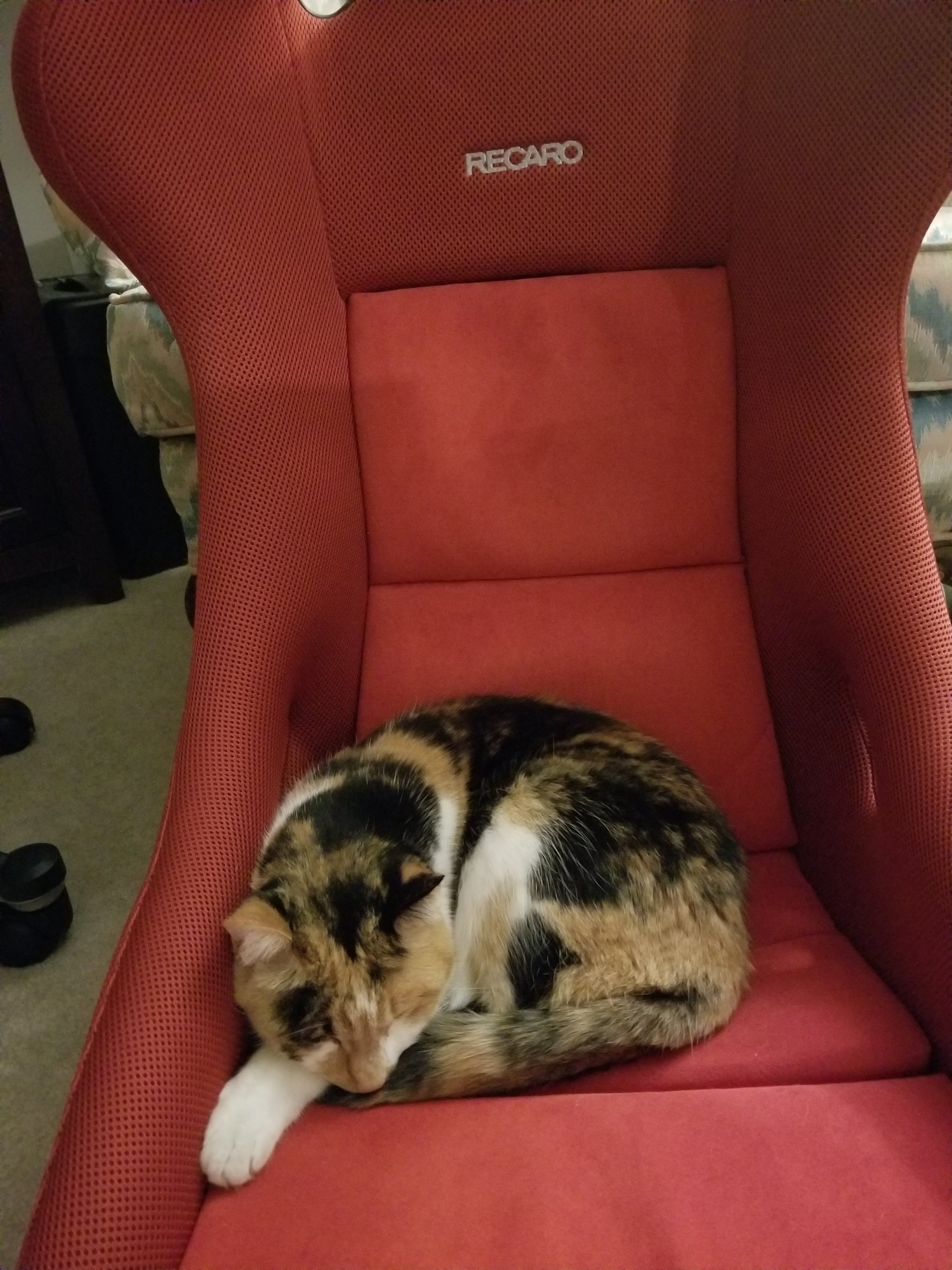 How is it she found "her" seat within hours of it arriving in the house?!!!
Last edited: Mar 13, 2021
You must log in or register to reply here.

A
I disassembled my T-LCM pedals today and discovered that...