Alice Powell chasing a seat at Caterham for Abu Dhabi 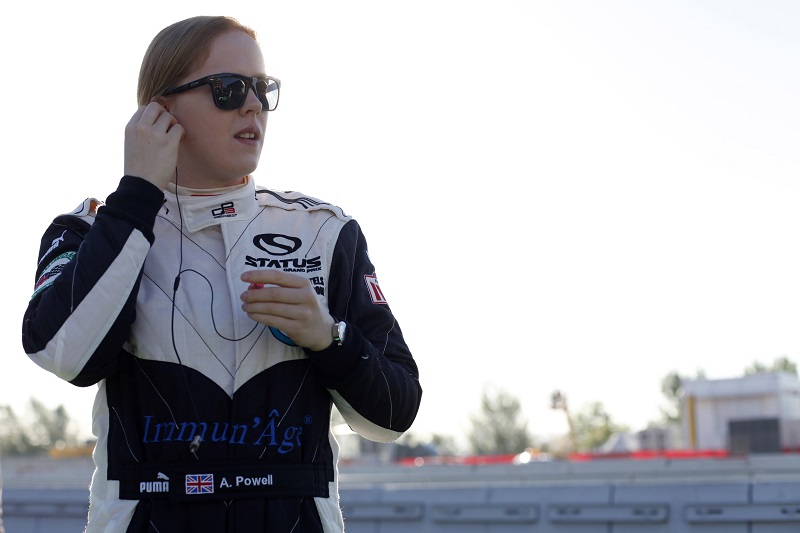 As administrators Smith and Williamson’s crowdfunding effort to get the Caterham F1 team to the Abu Dhabi Grand Prix next weekend continues, female British driver Alice Powell has offered her services, and some backing, for next weekend’s race. With Marcus Ericsson having confirmed his driving duties for Caterham are finished, it won’t be a problem of getting a driver slot (who Caterham’s second driver would be is unclear), but as is the case more than ever in F1, money and experience might be the big drawbacks.

Powell has reportedly been promised £35,000 of funding by her grandfather should she get the go-ahead to compete in at least the first practice session, and she has suggested other investors would be willing to add to that. But 35K is mere pennies in F1 terms, and would contribute just over 1.5% of the £2.35 million #RefuelCaterhamF1 is targeting in order to participate in the season finale. Having hit 50% on Tuesday, the amount donated is currently at 57% with the deadline at midnight this Friday. If the team could make it to Abu Dhabi, the reward would be leapfrogging the defunct Marussia team in the Constructors’ standings, with the possible financial benefits of (very likely) finishing tenth. What happens beyond this season is anyone’s guess, but time is running out to make the race.

There’s also the awkward issue of Super Licenses. The FIA mandates that no driver can take part in F1 without one of these, awarded for excellence in lower single-seater categories (preferably GP2 or equivalent) or 300km of F1 testing. Alice Powell has just over a season’s worth of GP3 experience to her name, and has never driven an F1 car before; it might therefore be understandable why the FIA might take against such a last-minute entry into the sport, but Powell herself was bullish about her chances, telling Sky Sports Online: “I’m pretty confident… It will be tough, there are people who have arrived at the circuit in the past to test and have been turned away and been told ‘you don’t have a Super Licence, we aren’t giving you a Super Licence’ so it will be very tough.”

And things may be even tougher with the Daily Mail now reporting that the administrators are looking for drivers with bigger backing, naming recently crowned GP2 champion Jolyon Palmer as a likely candidate for a seat. It would be good to see another female driver in F1, and one actually allowed to race at that (Susie Wolff and Simona de Silvestro still wait on the sidelines). Credit to Alice Powell too for taking perhaps the only chance she’ll ever get at this, but I fear she wouldn’t have a chance to prove herself in an entirely new category to her, plus driving a Caterham car that would easily be the slowest on the grid. That is, if the cars even reach the circuit first.

I am available! I don't have a Superlicense, but I did stay at a Holiday Inn not long ago.

And I have a diver's licence, hence I am more qualified to race for Caterham than Verstappen himshelf, so if Caterham is reading this, I am available.

I have a Racedepartment Racing Licence, maybe that counts?
For real though, these super licences are a giant scam from the FIA.
H

Gabriel Sterr said:
I have a Racedepartment Racing Licence, maybe that counts?
For real though, these super licences are a giant scam from the FIA.
Click to expand...

I feel that you need some kind of special dispensation for racing in F1, and superlicenses do that, but the ridiculous cost of it makes it seem like nothing but money hunting from Bernie.
M

Gabriel Sterr said:
I have a Racedepartment Racing Licence, maybe that counts?
For real though, these super licences are a giant scam from the FIA.
Click to expand...

100% spot on. I am pretty sure I could buy one with enough dough.

Just got a call from Caterham.
On the basis that I got a Lego Land driving license when I was 10 and that I completed 45 mins of single seater driving at Silverstone 3 years ago, I'm being considered for a race seat at Abu Dhabi

According to rFactor, I've got billions of dollars in the bank.
Might make an offer to buy the whole team!
Last edited: Nov 14, 2014
H

My mum just informed me that she wants to drive. She's fully qualified - she drives my father mad all the time.

I have a full car licence, a full bike licence, a RaceDepartment Licence and I finished 12th in the last F1 2013 season I did last year (In a Caterham too). So come on, I'm ideal. I know the tracks like the back of my hand.
I am awaiting the call.

Warren Schembri said:
According to rFactor, I've got billions of dollars in the bank.
Might make them an offer to buy the whole team!
Click to expand...

You'll be the guy to befriend then. Maybe give some seats to your RD pals?

I already have 4 seats in my car. No room for another seat.

Caterham confirm that they're racing in Abu Dhabi.

Not to be taken the wrong way, but I'm disappointed by this. Only because in my opinion it should be Marussia and not Caterham.
Marussia are doing it the right way and not relying on shaking change buckets at their fans to pay their debts for them.
Marussia deserve to defend their 9th place and race to support Jules.

In my opinion, Caterham do not deserve to race.

Yes, It's official Caterham will be in Abu Dhabi.

But if new drivers with no experience in F1 take part to the race for this team, I think the 107 % rule will be difficult to respect.

I hope the 107% rule is fully enforced for a change.

Desperate times calls for desperate measures.
If they're smart, they'd stick Susie Wolff and a great male driver in the other car...then continue the crowd-funding, while going after sponsors and brands which appeal to women.
They may have to promise the other driver shares in the team, to get the right candidate to step forward without getting paid a salary. The upside of that is that if he/she is to be rewarded based on performance, they'll bring their 'A-game' every single race.
Some may not like the choice but it just might throw them a life line while they get the cash to develop the car.
Susie wasn't that far off Massa's time, so she's faster than Ericsson and this choice would bring in huge amounts of cash...quickly.
Last edited: Nov 15, 2014

Andre Lotterer has been asked to take the seat again
http://www.autosport.com/news/report.php/id/116780

85 % of the staff of the team were dismissed.

It seems that Caterham tried to engage Khalil Beschir, a commentator for a sport channel. His answer:

Got a call offering me a drive in FP1 with Caterham.Of course the main question is how much money you have for it.Zero I am grown up now #F1

After hoping to engage pilots, it is official, Kobayashi will be with Caterham in Abu Dhabi.
Mehri could be the second driver.

I think this choice is logical, the two drivers know the car.
You must log in or register to reply here.