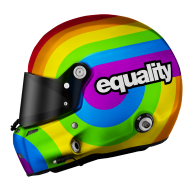 Tero Dahlberg said:
Yeah the limited setup options combined with the nature of Porsche means that almost every change you can make has an equal opposite effect once you're past the apex. And vice versa ofc. So if you want more stable corner entry you will have to deal with less stable car on corner exit.

I think these are some of the reasons why Porsche Cup is such a popular car/series around the world.
Click to expand...

lol, forgot the actual point Which is that changing the setup is almost solely for balance/driveability. Much more of a clear cut compromise of entry and exit characteristics rather than an overall gain or loss. Maybe min rear wing at Monza for example could be a clear gain. But on most tracks I would imagine it's more of a balance/driveability adjustment also. And a race itself is also a balancing act against the cars worsening driveability. Front getting lighter as fuel gets lower -> entry oversteer, and rear tyres wearing out faster -> oversteer just in general. So you can set the car to have "too much" understeer to begin with and it should be nicer to drive mid- or late in the race.
Reactions: Kresh
You must log in or register to reply here.
Share:
Facebook Twitter Reddit Pinterest Tumblr WhatsApp telegram Email Link
1 comments
Drift 19 | Now Called Drift '21 And Other News
13 comments
Assetto Corsa Competizione | New Hotfix Releases - Details
12 comments
Tony Stewart's Sprint Car Racing Released
27 comments
Poll | Which Racing Games Do You Regularly Play?
20 comments
Wreckfest | New Update and 'Rusty Rats' DLC Available
Top Bottom