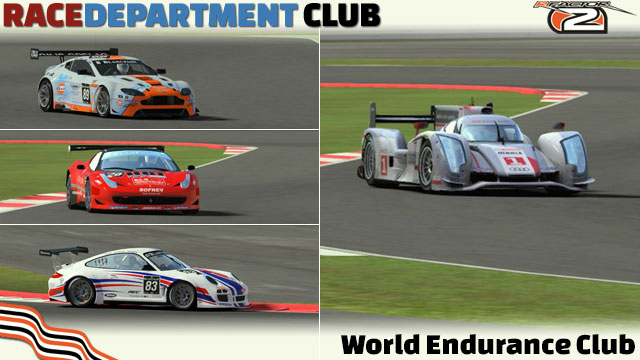 We are back! Another favourite has returned to rF2 club racing, here at RaceDepartment.com. The World Endurance Club takes on a slightly different look this year, with the emphasis being more on experimentation with a variety of cars and tracks, some of which may not be typically seen in or used for endurance events but shall bring a "spice" to the racing! For the first event of 2015 we take you to the Nürburgring, where we'll have access to the full 24-hour layout of the infamous circuit! Courtesy of RD member @Frederic Schornstein, who has spent the past few weeks modifying the stock ISI GT cars in an attempt to equalise their performance, we now have a set of vehicles that we expect to be competitive against one another. This is still very much a learning and testing process, so any feedback regarding these cars would be helpful in allowing the BOP updates to be improved further. And for fun we've thrown the Apex Modding SLS AMG GT3 & Honda Civic into the mix! Be sure to join us for the 2 hour thrill ride around one of the world's most mystical race tracks - it's sure to be a hell of a race!

Everything should be downloadable via server, upon login.

You will have the following cars to choose from:
Customs skins: Skin sharing will be enabled

Note: Please sign out well in time (at least 1 hour before the practise session begins) if you're unable to make the race. Thanks!

Staff
@Frederic Schornstein, creator of the BOP updates that have been applied to the GTR GT1, Corvette GT2 and Camaro GT3, has kindly provided this write up regarding the cars:

Each of the ISI BOP cars (GTR GT1, Corvette GT2 and Camaro GT3) will require you to pit for fuel, but during the pit stops refuelling and tires changes are performed separately. This means not changing tires will save you around 20 seconds in the pits. Each of these cars would require 2 stops per hour for fuel.

The Mercedes SLS AMG GT3 is the only car that has a big enough fuel tank to drive for 1 hour without a pit stop, but it is slower on pace as well. There is no proper data available yet, so you have to decide for yourself, if you want to go with the SLS or one of the ISI cars.

Tuning options
The Nissan comes with the default gearbox, which requires manual throttle blips on downshifts. It also features a new gearbox with auto-blip, which will add a 25kg weight penalty to the car, but will allow for more relaxed driving when you are having troubles getting used to manual throttle blips.

General
The Nissan has gained weight and drag in order to make it comparable against the other cars. This means that you may have to consider lower downforce levels than with the original in order to compete with the other cars on the long straights. Still, the Nissan is the car with the biggest amount of downforce and the fastest in the corners, but you will have to keep up the momentum to compensate the higher drag. The soft tires provide a good amount of grip and the car is very driveable, which is a nice characteristic on the Nordschleife.

Tuning options
Like the Nissan GT-R GT1, the Corvette requires manual throttle blipping on downshift, but like the GT-R it offers an auto-blip gearbox, which comes with a 25kg penalty.
You also can choose between the 2009 or 2010 engine. The 2010 engine has less torque, but more revs, more power and better driveability, therefore the 2010 engine comes with a 15kg penalty to make the 2009 engine an option for the race, if you prefer it.

General
The Corvette is nearly unchanged. It gained a little bit of weight compared to the original, but that's about it.

Tuning options
None that change the performance side of things

General
The Camaro has lost a good chunk of weight to make it competitive as the it has lower downforce levels, more weight and hard tires, which make it hard to put the power down in slow corners. With traction control it is possibly the fastest car, but without TC it is not an easy car to drive on the Nordschleife.

Tuning Options
The car has the option to unlock the gearbox, which you have to do to adjust the gearing in the setup, which is required on the Nordschleife.

Not enough testing done to give more information.

UPDATE
Tune in to the track guide - commentary by @Frederic Schornstein:

Read this part very carefully - failing to comply will result in a penalty!

1. Normal pit stop (how you should do it):
After you exit the last corner of the Nordschleife keep it on the right side of the track you will see a white line coming up. Keep the car right of the white line, but close to it and enter the pit by going between the cones and barrier on the left and the tire stack on the right. Bring the car down to the pit speed limiter before the white pit entry line.

2. Damage on GP track - Lap 1 emergency pit stop:
It's almost inevitable that an incident will occur between some drivers in the first few corners. If you have damage it is advised to enter the pits from the GP track, so that you don't drive the whole Nordschleife with a damaged car - the circuit is lengthy, undulating, tight and twisty, which can be a danger for you and others if you are carrying damage. To enter the pits from the GP track go a bit slower through the NGK chicane. Make sure there is no one close behind you, who could get caught out by your slower mid-corner speed. After the chicane keep it to the right and immediately enter the pit lane, so you don't get in the way of other cars. You will cross Start/Finish in the pits, but it will not count as a lap in the race session, so your first official race lap will start once you exit the pits.

3. Emergency pit stop during the race:
You may forget to enter the pits from the Nordschleife and you might be short on fuel or have damage, so you might want to make an emergency stop as described in chapter 2. The only difference now is that there are cars that may be entering the pits coming from the Nordschleife. They will be going at speed at the point where the Nordschleife and the GP pit lane meet up, and the cars on the Nordschleife have the right of way. It is your responsibility to not cause any danger to others when taking this route. You should check your car position indicator, look to the left, bring the car to a stop, and maybe even take the grass for the first part, so you can see oncoming cars from a greater distance. This route should only be taken if a lap around the Nordschleife would be dangerous, else it is forbidden. If you cause an incident during this attempt to make an emergency stop it will be handled as a breach of the golden RD rules and will most probably result in a 30 day race ban.
Last edited: Jan 28, 2015

in, car will come at a later stage

Hopefully we get a good amount of sign ups.

I will be in with the Camaro.

I'll be there Not sure what car I'm gonna drive yet, but I wouldn't miss this race.

Sign me up, I'll probably go with GT-R or Corvette =)

Frederic Schornstein said:
I will be in with the Camaro.
Click to expand...

I won't race as bad as last time, promise!

@Daiman Patel I'm in. So excited for this and the goal is to crash less than five times. Probably won't succeed but i will have fun trying.
Last edited: Jan 18, 2015

I'll most probably go for the GT-R.
Hope I won't need to uninstall stock ISI cars for this?

I'll most probably go for the GT-R.
Hope I won't need to uninstall stock ISI cars for this?
Click to expand...

For me they work fine in parallel. I tried to make that sure, but pretty much a noob at modding still

Staff
UPDATE
Tune in to the track guide - commentary by @Frederic Schornstein:

It will take me 2 hours to get around once, so just need 1 lap I will take forever to learn all the corners.

Premium
Sign me up,not sure in witch car yet.

Update for the Camaro is available other cars are still the old ones (I probably should split them up):

Should be the last update before the race. If you notice something performance whise on some of the cars, write me a PM or post it in the Mod thread.
http://www.racedepartment.com/downl...-gtr-gt1-corvette-gt2-camaro-gt3.4596/updates

As TC will be allowed the Camaro got a penalty added for using TC. It is a whapping 80kg, so leave your TC off in the Camaro. Also the Camaro gained 10kg of weight as it was a tiny bit to fast.

Premium
As long as your throwing in the Honda why not include the Seat Leon as well and have two classes,GT and ST (street tuner).I have not done a lot of testing yet but i believe they are very close on pace.You could even add the 370z witch is also very close to the Honda and Seat.I'm sure a little BOP would put them all very even.Would make for a nifty class of cars i think.

FYI for those that are not aware the Seat has been updated to 1.2 and now includes an endurance option in the upgrades menu.The car is very nice now and very close to the Honda in quality imo.
Last edited: Jan 15, 2015

When the Server will be up?
You must log in or register to reply here.