Voting is open for the RaceDepartment Bahrain Grand Prix 'Driver of the Day'.

An opening lap like the one we witnessed today in Bahrain will always put things into perspective. It is worth taking a moment to be thankful for the leaps made in safety, as well as for the procedures and people in place that make Formula One as safe as it can be.

When the race got back underway, we saw some strong performances from drivers up and down the grid. There was an impressive display of overtaking ability from certain drivers, including one who managed to rise 10 places in today's race.

Others managed to demonstrate real consistency in a race where tyre degradation was very high, taking advantage of reliability problems suffered by others. This saw one driver score their second career podium, while another secured their best result since the opening race of the year.

Let us know who you thought starred in today's race, and join us in wishing a swift recovery to Romain Grosjean. 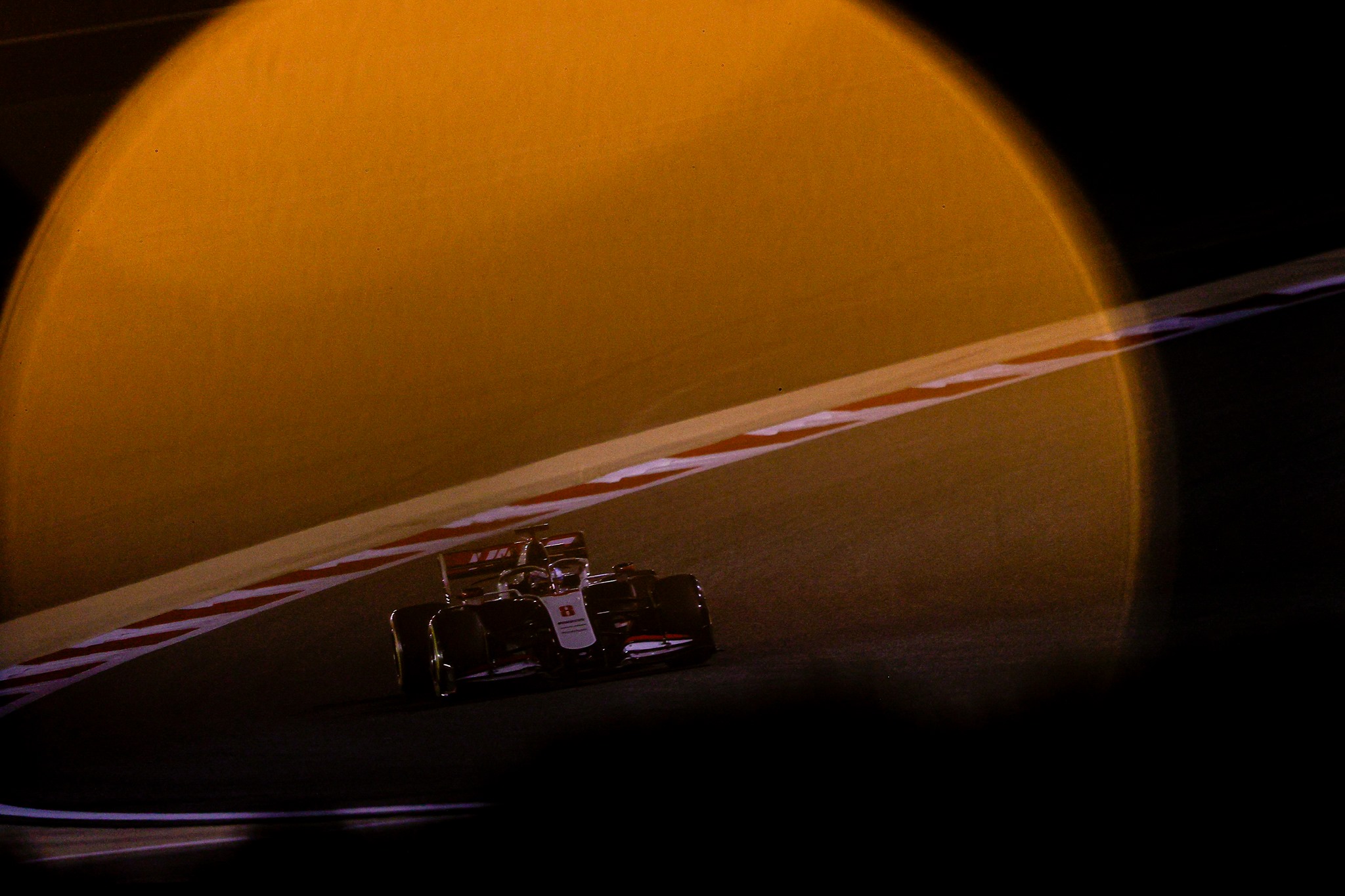 Staff
I think that the medical team on track deserve a mention too, being so quick onto the scene, and Dr. Ian Roberts for being immediately at the guard rail to help Romain over the barrier and provide care. The design of the cars and the procedures in place are needs, but we're also very fortunate that we can rely on the bravery of the people looking out for the drivers.

Most impressive performance today for me was that of Carlos Sainz. He did a very impressive job climbing from 15th to 5th, and even managed to catch Norris towards the end of the second stint. Had he been more fortuitous with strategy I suspect he'd have had the pace to beat him too.

I do hope that Grosjean is able to make a return this year, and have no doubt he'll be fighting hard to get back into a race car as soon as possible.
Last edited: Nov 29, 2020
W

Glad Grosjean is okay, hopefully that's the last time we'll see him in F1. He's a danger to himself and the others behind the wheel.

Everyone: votes for Grosjean
Me: I´m so proud of this community
Last edited: Nov 29, 2020 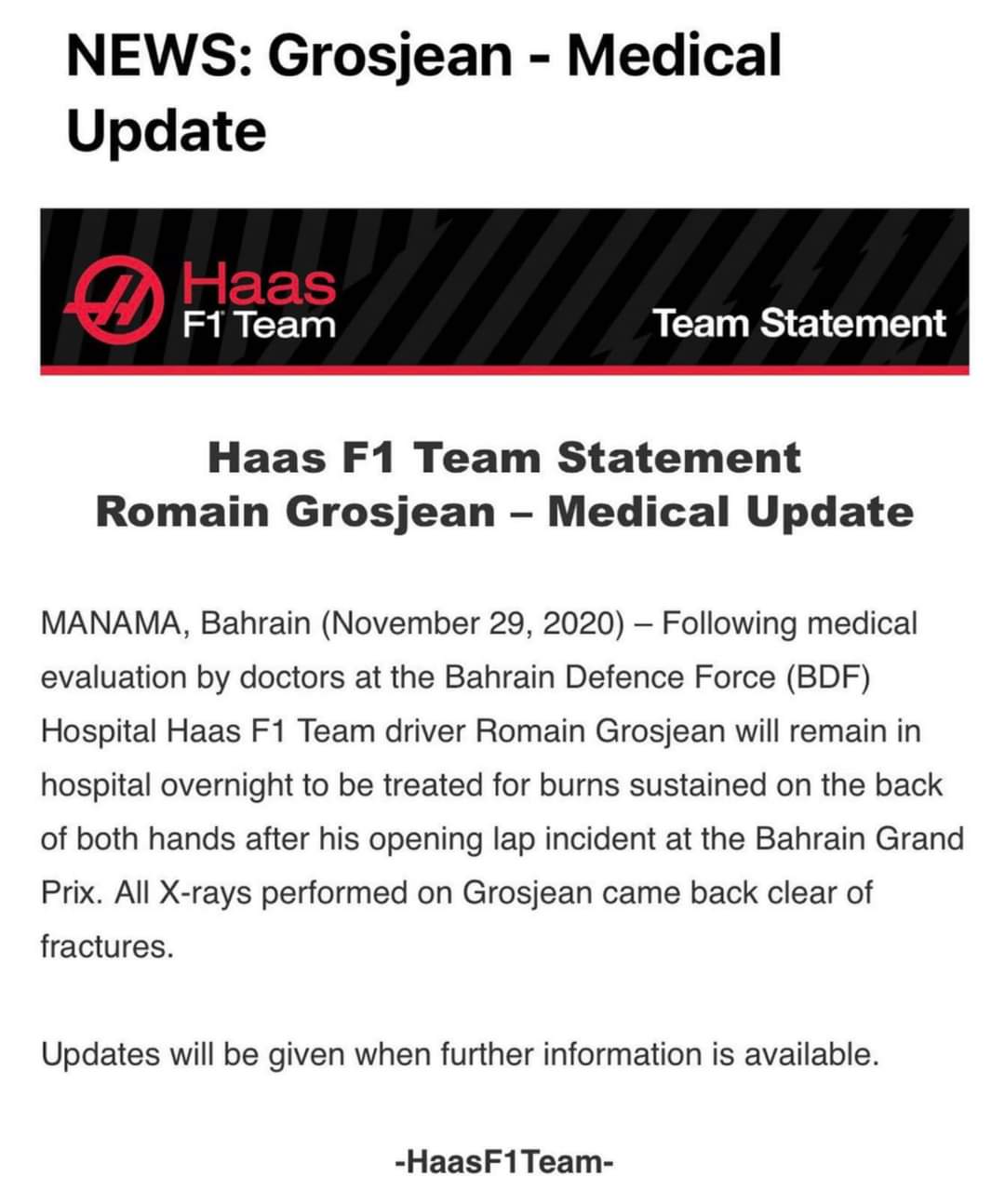 Some good news, no fractures!

I'm more hopeful he'll be able to return before the end of the season.
R

That`s very good news. Especially for his family. Hopefully he`ll be back for the finale.

Grosjean got my vote on F1.com so i voted Checo 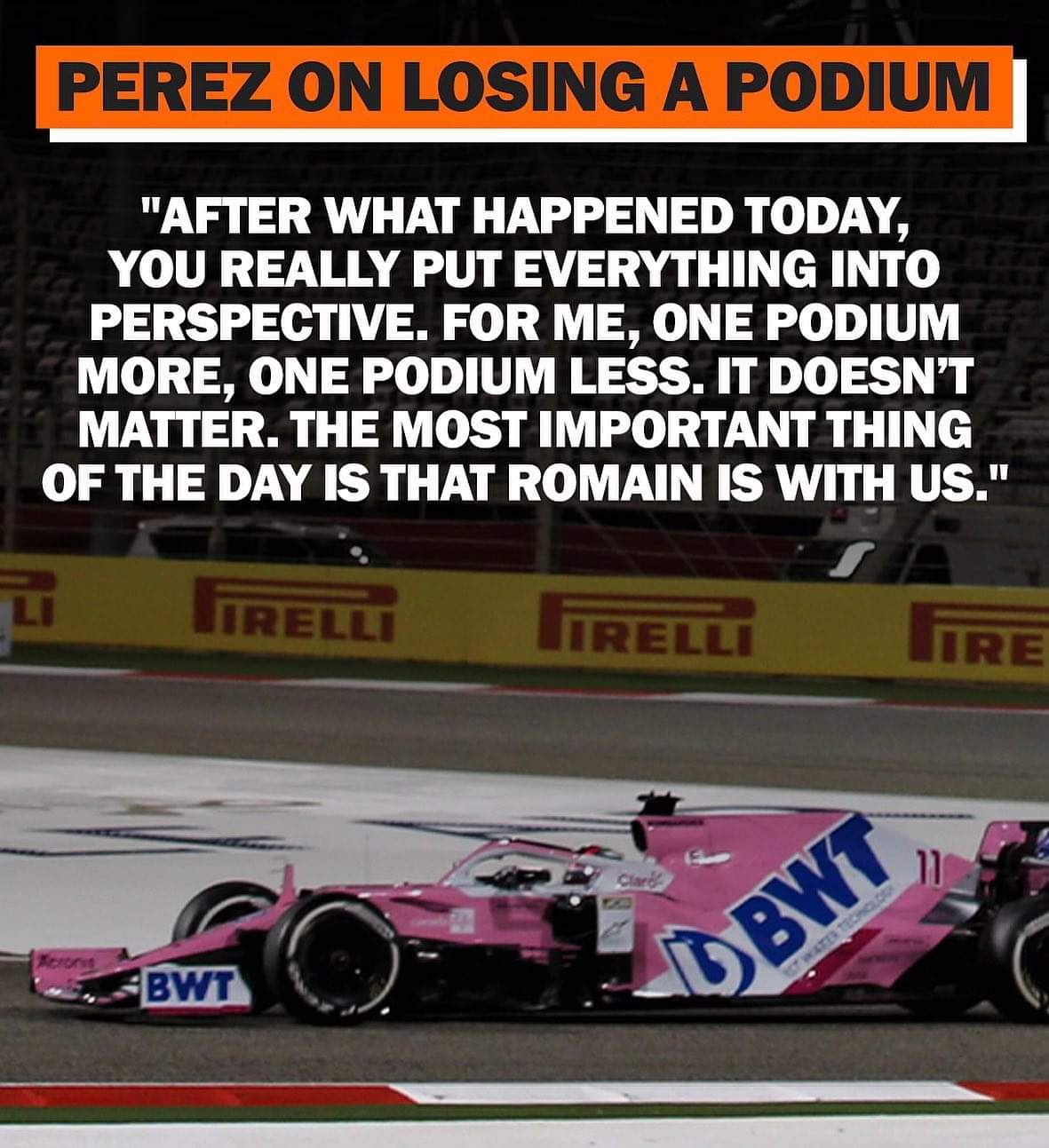 Premium
Update from the man himself: http://instagr.am/p/CIL-IOZJ7Xm/

Premium
We've seen some "maybes", but I think today was our "definitely": the halo definitely saved a life today. Romain's head would have come in contact with the barrier.
E

I mean i am happy Grosjean did not get injured seriously, but why vote him driver off the day, he crossed the track into Kwjat and crashed after 2 corners?

Today your opinion does not count!

Imagine Daniil Kvyat would have went to have same accident instead of Grosjean as he cut him in worst racecraft fashion. Grosjean is so lucky today, not only that he escaped the fire, was not decapitated, not even a fracture, but also that he himself was there, and not Kvyat.

Things has kind of evened out for Grosjean. If after this accident he will still be unable to race properly, then he should quit.

Grosjean is surely star of the day, it is just thrilling and amazing how lucky he was and it is so outstanding that such accident even happened in modern F1. But he is worst driver of the day, no doubt about that.
Last edited: Nov 29, 2020

Additionally I would also award driver of the day to Alain Van Der Merwe as well for his heroic actions dealing with Romains severe accident!!
W

I hope his family sit him down for an honest chat.
He has ridden his luck and clearly lacks a basic degree of situational awareness. Some of his decision making leading to accidents is mind-boggling , deciding it was a good idea to try to cross the track whilst the remaining cars are passing when trying to recover a spin for instance!

Painful race for Pérez, who still has a black cat in his car, spoiling flawless driving.

Not sure why votes are for Grosjean, it's a blessing he's alive and in good shape, but it was another mistake by him that caused the crash.

That said, driver of today was the doctor.

Premium
Thank goodness there was a spectacular crash with nobody seriously hurt. Without this, the race had relatively low entertainment value.