Crash Doornbos; you must choose the vid in the right side of the list.

Luckily not to mutch damage.
He keeps on driving.....lol

It's not THAT difficult a track lol

Today is the big day Can't wait for tonight, when they finally broadcast it on television live!

To bad for Doornbos......that wall has no repect for the car.
And he whas doing pretty well...
Now all he can do is getting his experiance level up on Indy.
With 40 laps down there wont be anything else to do. 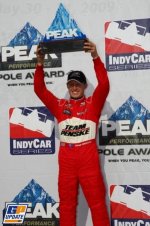 Reigning IndyCar Series Champion Scott Dixon has clinched his second victory of the season and, with it, the championship lead after Sunday's Milwaukee Mile. The Target Chip Ganassi driver overhauled pole man Ryan Briscoe to take the win from the Australian as Scotland's Dario Franchitti completed the rostrum.

Crossing the line first by 2.1 seconds confirms a weekend of firsts for Dixon as he, not only moves to P1 in the standings, but also becomes the first man to win twice after five races so far in 2009. Although Tony Kanaan took the lead at the start of the 225-lap challenge, pole man Briscoe retook control of the race when the Brazilian retired with a fire onboard his car. Briscoe held the top place but was held up by back markers and the Penske driver lost out when Dixon seized the moment to take the lead.

"I was trying to get the flow of traffic the whole day," explained winner Dixon. "I definitely think - from the start - our car was better; we could run quick times when we needed to and we were good in traffic. We had many runs on Briscoe and he kind of blocked a lot, and that was kind of frustrating early on, but he definitely got caught up there with (Tomas) Scheckter trying to take him on the bottom and I got a great run on the high side and it just lined up perfectly."

The first driver outside of the top three was Graham Rahal, after losing out from second at the start, with Danica Patrick rounding out the top five for Andretti Green Racing. Hideki Mutoh enjoyed his most competitive showing of the season so far with eighth as second Briton Dan Wheldon completed the top ten. Indy winner Helio Castroneves fought to snatch 11th position after starting at the back due to a mistake in qualifying.

Dixon's second win of 2009 - after also taking the chequered flag first at Kansas - leaves him just four points ahead of the tying Briscoe and Franchitti in the championship as the IndyCar Series prepares for its third race in as many weekends, with Texas being the next stop.

It was a dull race only three yellow's ,one for Conway who was scraping the wall,Viso and Kanaan , a bit of excitement came from the pit stops,an the rest was a longgggg procession.

Texas round to be driven on 6th of June

Pole for Franchitti in Texas 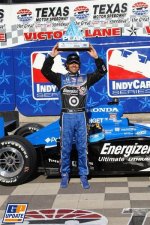 Scotland's Dario Franchitti has claimed pole position for the Target Chip Ganassi team ahead of Saturday's night race in Texas. 2007 Champion Franchitti, joint second in the championship with Ryan Briscoe, heads the grid from the Australian with championship leader Scott Dixon right behind the duo.

Saturday's race promises to be a thriller with the top five drivers in the championship being the top five on the grid. Franchitti beat Briscoe to the top spot by 0.045 seconds as reigning Champion Dixon, in third, will be attempting to protect and retain his championship lead. Danica Patrick currently lies fourth in the standings ahead of Helio Castroneves, although the Indy winner's qualifying result confirms two Ganassi and two Penske cars in the top four positions on the grid, with Patrick fifth for Andretti Green.

'Best of the rest' is Mario Moraes with sixth place as Dan Wheldon, who was fastest in first practice, slips to seventh. Marco Andretti will line up eighth ahead of 2009 rookie Robert Doornbos and Ed Carpenter's Vision Racing car.

Alex Tagliani and Sarah Fisher, back in the series for the first time since their Indianapolis outings, are locked together on the grid in 13th and 14th positions as Jacques Lazier, taking over from Paul Tracy to race the recovering Vitor Meira's car, rounded out the 24-car grid for Team 3G.

"Thanks for reminding me," pole man Franchitti laughed, having being told that his team has won their previous four races whilst carrying an Energiser livery such as the one he sports this weekend. "That's quite a record, isn't it? It would be nice to continue it, but we'll see what happens." 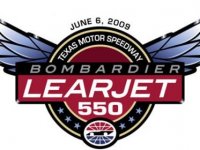 FORT WORTH, Texas - Third victory at Indianapolis. His third at Texas Motor Speedway. Helio Castroneves likes the karma associated with the No. 3 car so far this season.

Castroneves swiped the lead off a Lap 175 pit stop and went on to a 0.3904-of-a-second victory over Team Penske teammate Ryan Briscoe in the Bombardier Learjet 550k under the stadium lights and a full moon. Scott Dixon, the 2008 race winner, was third and Marco Andretti finished a season-high fourth.
For the second race in a row, Briscoe was dominating. He led a race-high 160 laps (last week he led 154 of 225 at Milwaukee) and was riding to his second victory of the season - holding a 9.9851-second lead over Andretti before a Lap 150 caution period for debris bunched up the field.

Castroneves overtook Andretti for second on Lap 160, and when a yellow flag flew on Lap 173 after A.J. Foyt IV's car made contact (front suspension failure) with the Turn 2 SAFER Barrier the top 10 cars pitted two laps later. Castroneves' crew, which won the pit stop challenge at Indianapolis two weeks earlier, got the reigning Indy 500 champion out with a 6-second stop for tires and fuel.

The crowd, watching on the big screens and hearing the PA announcer, roared in anticipation of seeing Castroneves climb the fence at the start/finish line. He didn't disappoint.

"We did the best we could, I just didn't have enough for Helio in the final stages," said Briscoe, who took over the IndyCar Series championship race with 199 points (three ahead of Dixon). "The last 20 laps were some of the most frustrating I've ever driven. To lead the whole race and have the quickest car out there, I just couldn't pass Helio. The high line was slower.

"At least we came in second. We got points for leading the most laps. The important thing is we're racing for the wins. We'll get our wins. It's just frustrating for tonight." FULL STANDINGS

Castroneves, who started fourth, has been there and sought to console his friend/on-track rival. He tied former Team Penske teammate Sam Hornish Jr. with his third win at Texas, and gave Penske Racing its fifth victory at the 1.5-mile, high-banked oval.

"It was an incredible day for Team Penske," he said. "All the credit also goes to Ryan Briscoe and his team. They push us and we push them, and together we're pushing towards the top. Having first and second at Texas is not easy, so that's a compliment for everyone.

"In the beginning of the race, we were saving fuel, but you're also trying to figure out what your car is doing, and that what I was trying to do. The car was loose, and there were some moments out there. But we figured out what to do and great pit stops the guys put me up front. In the end it was 50 laps and full throttle. It was the toughest 50 laps that I had to go through, but we held it together."

Dario Franchitti, the pole sitter in the No. 10 Energizer car for Target Chip Ganassi Racing, finished fifth and Danica Patrick missed posted her fifth consecutive top-five finish in the No. 7 Boos Mobile/Motorola car. Dan Wheldon started and finished seventh, while Tony Kanaan recovered from two consecutive DNFs to finish eighth. He started 16th in the No. 11 team 7-Eleven car.

"We had a strong car all weekend and then during the race the steering became really heavy. It just wasn't the car we started with," Patrick said. "I wish we could have had a top-five finish, but Marco passed me at the end far and square."

Ed Carpenter posted his third top-10 finish of the season (and his third ninth place at Texas) and led his first lap of the season in the No. 20 Menards car for Vision Racing, and Mario Moraes notched his second top 10 in a row in the No. 5 KV Racing technology-Votorantim entry.

"I think we got the most out of the car we could tonight," Moraes said. We finished in the top 10 again and earned some valuable points and pick up some spots in the championship standings."

100 years ago in Indianapolis

Very cool, blast from the past! Thanks, some great photos