What is this thread?
This is a F1 team manager game that starts from 1979. Playing is free and requires a relatively little effort by the players. Players choose teams that they wish to try and lead to the glory of becoming F1 World Champion. Gameplay consists of signing drivers, sponsors, engines and tyres and development of chassis.


A brief history
Following the tragic weekend at Monza that cost the life of Lotus driver Ronnie Peterson, F1 has had a stormy off-season. A number of FOCA (Formula One Constructors Association) teams demanded immediate actions from FISA, the sport's governing body, to improve the safety of the cars.


FOCA teams wanted more regulation on the safety aspects of car building and better pre-season crash tests. Their proposal also included reducing the speed and banning the turbos (only used by Renault) that were regarded too dangerous to drive.


FISA and most notably Ferrari on the other hand blamed Lotus's innovative ground effect as the primary cause for the accident. FISA didn't see a need for more safety measures and their proposal only included a ban on ground effect systems.


Both proposals were met with very mixed reception. Some of the smaller FOCA teams felt their opinions weren't heard enough when creating the proposal. Thus, Shadow, ATS, Ensign and Arrows switched sides to FISA camp. FISA camp wasn't uniform either as Renault was left in a limbo by both proposals. They felt more safety regulations were needed but FOCA's proposed ban of turbos was unappealing for them.


Negotiations lasted weeks and it seemed impossible to reach an agreement. FOCA, lead by Brabham boss Bernie Ecclestone, was already laying groundwork for a new rivel championship. Renault had released an official statement of their retirement from the sport.

Now it's the dawn of a new season and the teams need new managers badly. Are you the person they are looking for?

Aim of the game
The game has two aims.

How the game works
The race weekends are run on Microprose Grand Prix 2 by the game moderator. Driver and team attributes and values, contract negotiations, events etc. are calculated in OOo Calc sheets, made by game moderator.

Game moderator reserves the right to adjust any unrealistic values or functions at any time.


Race weekends
Race weekends are simulated twice a week; normally on Wednesday and on Sunday. However, as this is the first season the start times will probably vary a bit before a good rhtyhm is found.

→ Minardi and Caterham advance to qualifying.

28 teams take part in qualifying. There is room for only 26 drivers in the grid so two slowest drivers won't qualify for the race. There is no 107% rule.

Teams receive prize money depending on their final position in the constructor's championship standings. Below is a list of prize money awarded for each position. 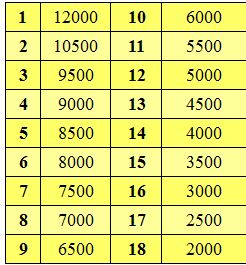 How to sign up
You can sign up by replying to this thread. Be sure to include the name of the team you wish to manage. Available teams are listed below. If no teams are available you can sign up to waiting list. There is no limit on the number of sign-ups.

Note! By signing you confirm you have read and understood the rules of the game.
Last edited: Apr 5, 2015
Reactions: airutonpurosuto8912, kedy89, Jimlaad43 and 1 other person

How to play
When a season begins game moderator creates a private conversation with each manager. The conversation can be used for any communication between the manager and game moderator. All team information not meant for public viewing (incl. Budget, development info etc.) will be shared via this route. Every manager can share any information they wish publicly.


1. Each team receives 2-3 sponsor offers via PM. Every manager must choose only one of the available offers before the deadline indicated in the PM.​
2. Available driver and engine and tyre manufacturer lists are released. After signing a sponsor contract each team must bid for drivers, engine and tyres via PM before the deadline indicated in the forum post containing the lists.​
How the bidding works:

Every item (driver/engine/tyre) has a minimum salary/price that has to be met. Each team must make at least three offers for each item (except for tyres) including annual salary/price and length of the contract. Offered contract length can be 1-3 years (only 1 year for pay-drivers).

Note! It is advised to make more than three offers per item, especially if bidding for potentially popular items. There is no limit on how many offers can be made.

* Pay-drivers pay for their seat before each race. Each pay-driver has a maximum money he can afford to pay per race. Pay-drivers can be signed only for 1 year at a time.

Note! The highest bidder doesn't always win the bidding contest! There are other factors, including team status, that affect which team's offer an item chooses.

5. When dealing with team budget, a manager should keep in mind that the team's budget cannot go below zero. If a team cannot afford to sign an engine and/or tyre deal for a season or cannot afford to pay for its existing contracts, it will go bankrupt and fold. The manager of such team is free to rejoin the game with a new team next season.​ 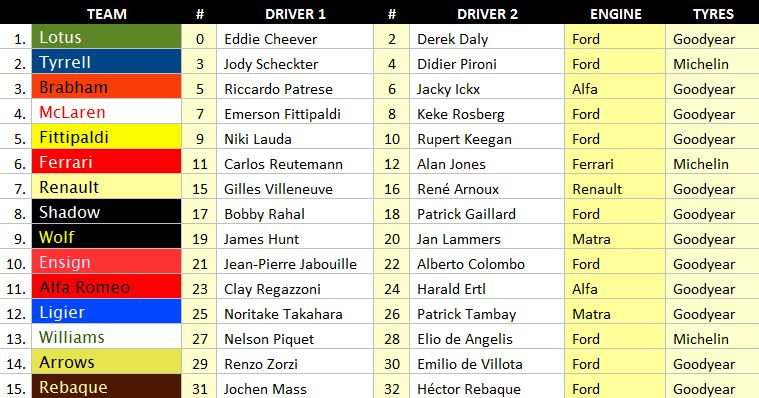 Calendar
Races are run on an average of 2 races per week. 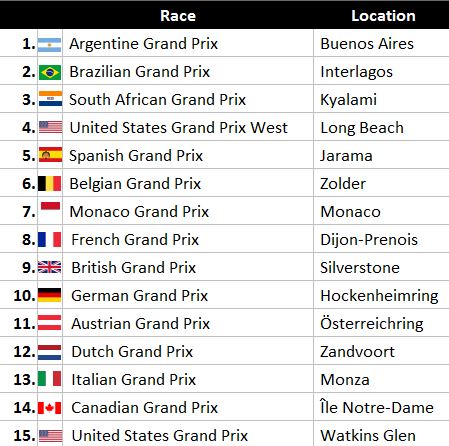 Bottom three teams after 7 races have to go through pre-qualifying in the last 8 races.

will read through everything later when I'm back home.
Reactions: airutonpurosuto8912, Milos, Aidan Keranen and 2 others

Well, it wouldn't have made any sense to have all contracts nullified without a proper story. I'm glad there was already some FISA-FOCA tension back then so I didn't have to make it all up by myself

Double-post just to inform I have refined some bits regarding testing and chassis development.

Feel free to ask if you don't understand something. I promise many of the things mentioned will be more clear once the game starts. 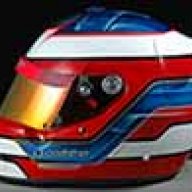 Can i join with Toleman
Reactions: Jimlaad43

dang, shadow got taken
I'll think if I'll participate then, I want to reduce the amount of forum games I'm in

alright, I've read the rules and I kinda like the game concept. I won't get to manage the team I wanted to, Shadow, but the Arrows does look nice

and I also had my best season in the F1 sim last season with Arrows.

so yeah put me in there.
Reactions: airutonpurosuto8912, TTupsi and kedy89

if you mean the driver, nope, all contracts are reset and you have to sign your own drivers
So technically I can get a driver of such talent like the WDC Jody Scheckter (who was driving for Ferrari! dat irony tho), to drive for such a backmarker team like Arrows F1

miki2000milos said:
if you mean the driver, nope, all contracts are reset and you have to sign your own drivers
So technically I can get a driver of such talent like the WDC Jody Scheckter (who was driving for Ferrari! dat irony tho), to drive for such a backmarker team like Arrows F1
Click to expand...

Steven Poirier said:
Can i join with Toleman
Click to expand...

Sorry, Toleman doesn't join the series until 1981. There are other great choices still available though. See the end of the first post.