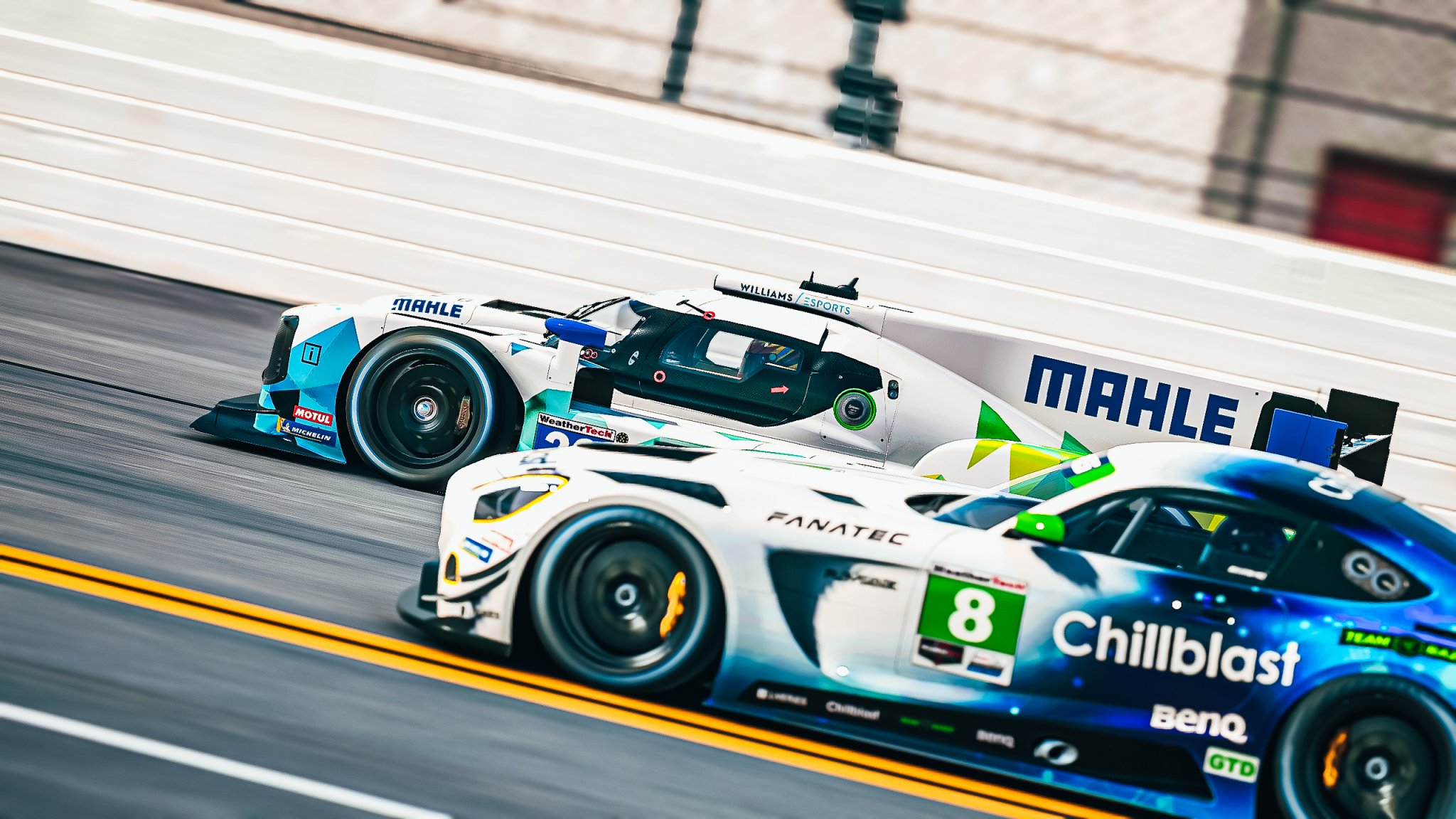 As all the noise following rFactor 2 technical issues during the Virtual Le Mans race was starting to settle down, it's the sporting side of things that fuels yet another sim racing esports controversy after iRacing's edition of the Daytona 24h, with Williams Esports being at the heart of it all.

Everything started after qualifying. Pole position lap in the top class was performed by Alxander Spetz in the #1 LMDh car by driving on the apron instead of staying on the banked part of the oval. The rules clearly stated the apron was off limits, and cones were present at the beginning of the turns to further deter cars to take that line, but unusually, the software didn't trigger an off-track strike for using those bits of tarmac. Organizers explained the detection was manually removed to encourage teams suffering car damage to use the apron to crawl back to the pits without crowding the racing line unnecessarily.

Still, despite the driver having suffered a ban from the service, the team still kept, their pole position, and overall race result, although Williams purposefully switched to the face cam view for the whole lap on their own livestream. iRacing stated that the results are definitive once the race is finished, which hasn't been taken well by other competitors and the community, prompting complaints about the lack of live stewarding.

But the worst was yet to come, as sim racing streamer Pablo Araujo released a video exposing even more disturbing behavior from the team, this time in GT3.


As evidenced by replay footage, Williams Esports used a car that was out of contention after sustaining damage to help its other entry in the class. Car #2 purposefully waited in the pits and in the pit exit road to provide slipstream to its sister #55 car - which while questionable, isn't currently actively prohibited by the regulations - but more crucially, actively tempered with other competitors by defending position despite being several laps down. At some point, car #2 even pushed car #034, which was in the leader's lap, into a crash, effectively ending that team's race.

Tweets from Seb Hawkins, the esports team manager, and Jenson Button, Williams ambassador, tried to justify the LMDh car's tactics in qualifying, but haven't communicated yet on the GT side of things, as people are now calling for action from the organizers side.


UPDATE: Williams Esports has released the following statement on the 27th of January to address the described incidents. 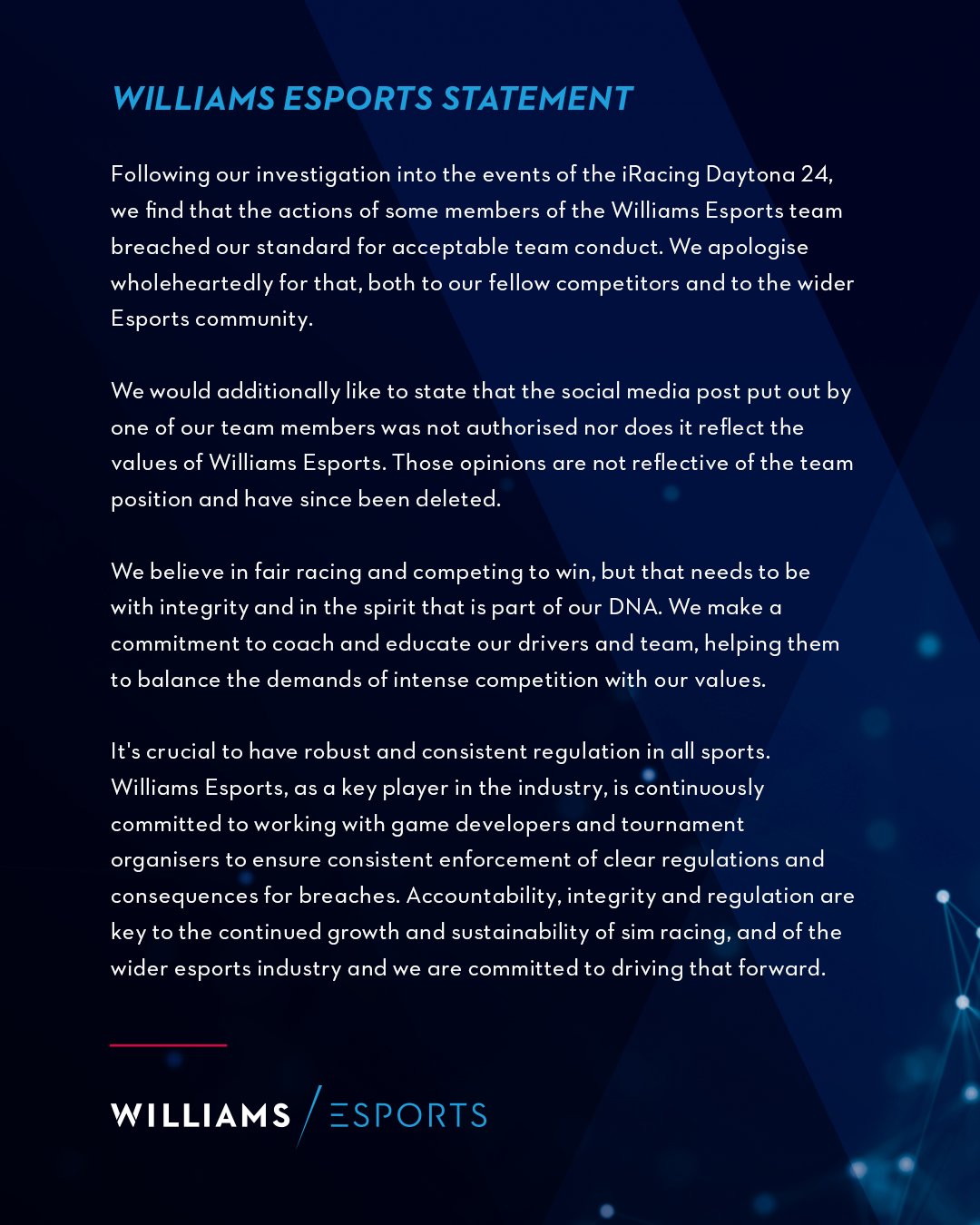 Timo push him out!
Whatever it takes apparently...
If anybody asks me why I prefer offline racing and complain about AI in pretty much all the sims, this is why. Sweaty, exploity people for whom winning is more important than a fair racing environment. And those appear at all competitive levels, not just the top 1%.

I never race offline myself only online and I am using the same explanation as you. I do race in a fair environment for just having a great battle with likeminded people instead of the AI I enjoy the errors, the human interaction and of course the unexpected moves while fighting for position. It's what helps me to become a better driver.

Re: video, I don't think this kind of behavior and tactics belong in esports but it also doesn't belong into sim racing for mortals.
Cheating, pure and simple. Ban the team from ever entering esports or, at least remove them from the next few races and massively fine them!

There is no place for cheating in any online game..... period! It ruins it for everyone else.

Couldn't agree more. I also play offline, mostly due to this reason. That's also why I find it shocking that offline racing is getting less and less attention with the primary focus shifting to multiplayer. Just a small detail but ACC, for a GT3 endurance sim, doesn't have Ai taking over the car. So a 24h race is out of the question.
So, it was like real racing then?
The underhanded tactics were comical and totally deserving of the criticism.
Iracing needs to step up on this.
Them thar cheat’n!
Clownshow
I remember when iRacing was marketed as a supplement or even a replacement for seat time, not eSports. Really showing my age now. It almost felt like you were supposed to take it a bit serious like it was actual racing, and drive the cars like they were cars. Now it's speed running with a car theme and serious COD vibe.

If it weren't for the AI and fact rF2's skin and roster management is so damn awful I'd have lost interest long ago, as it is I'm offline only.
Personally I only race online with people I know. There are many, many fair drivers out there but unfortunately it only takes one idiot (pardon my french) to produce bad news. If this continues the problem will solve itself. Which might not be a bad thing. Hadn't it been for the pandemic I don't think online racing would have attracted the attention it got because of the involvement of professional race car drivers (and even among those there was cheating)
I have a son that age, it wasn't good what they did, they knew the Q lap was not kosher but they did it. I look at my son and think that if he made a mistake I wouldnt want half the internet piling in on him, hes young.

As a team decision (as I am sure it was) they should be held to account, however that may look like in sim racing but I am hesitant to pile on to someone who is still at school, kids at that age don't need a huge pile on but they do need to learn it was wrong.
Well thats esports for you, specially when money is on the line. Forget anything akin to the word "racing". Too much aggro for older people, and a bucket of bad examples and a bad environment for kids.

I dont think this stuff in this video appears at all competitive levels at all. These are issues for the 1% esport people. You dont have to race with AI for this. There is other stuff at lower levels, like park on apex, blocking, intentional rear-end, dive-bombing but in my experience if you race on LFM or iracing this is not a huge nuisance except maybe divebomb (especially in multiclass).

Sure the winning mentality is there with people and i guess the AI is not trying to win (or is it? ).

Unlike the guy in the video i blame iracing more than these esports teams. Just fork out bit of money for live stewards. I have seen many an ACC race on Jardier channel with live stewarding and all this nonsense is not there.
If I was evil I could ask why iRacing hasn't been able to solve their track limit system after over ten years of running these big events. I mean, switching off track limits with no live stewarding sounds like a recipe for desaster. There are other platforms, that get this stuff sorted within three years of running such events.
Funny, 3/4 of the attacks on the 24H du mans event come from iracing drivers and now they play blind on the bugs and cheats of their event...pretty funny!
but in both cases it's not glkorious for simracing...
Last edited: Jan 25, 2023
Just disgusting :
- the cheaters
- the Williams Racing team trying and failing to hide it, then defending it
- Jenson Button / Has he a contractual obligation to lie ?
Who cares. It's a videogame. No one cares.
Williams eSports trying to pull this off? 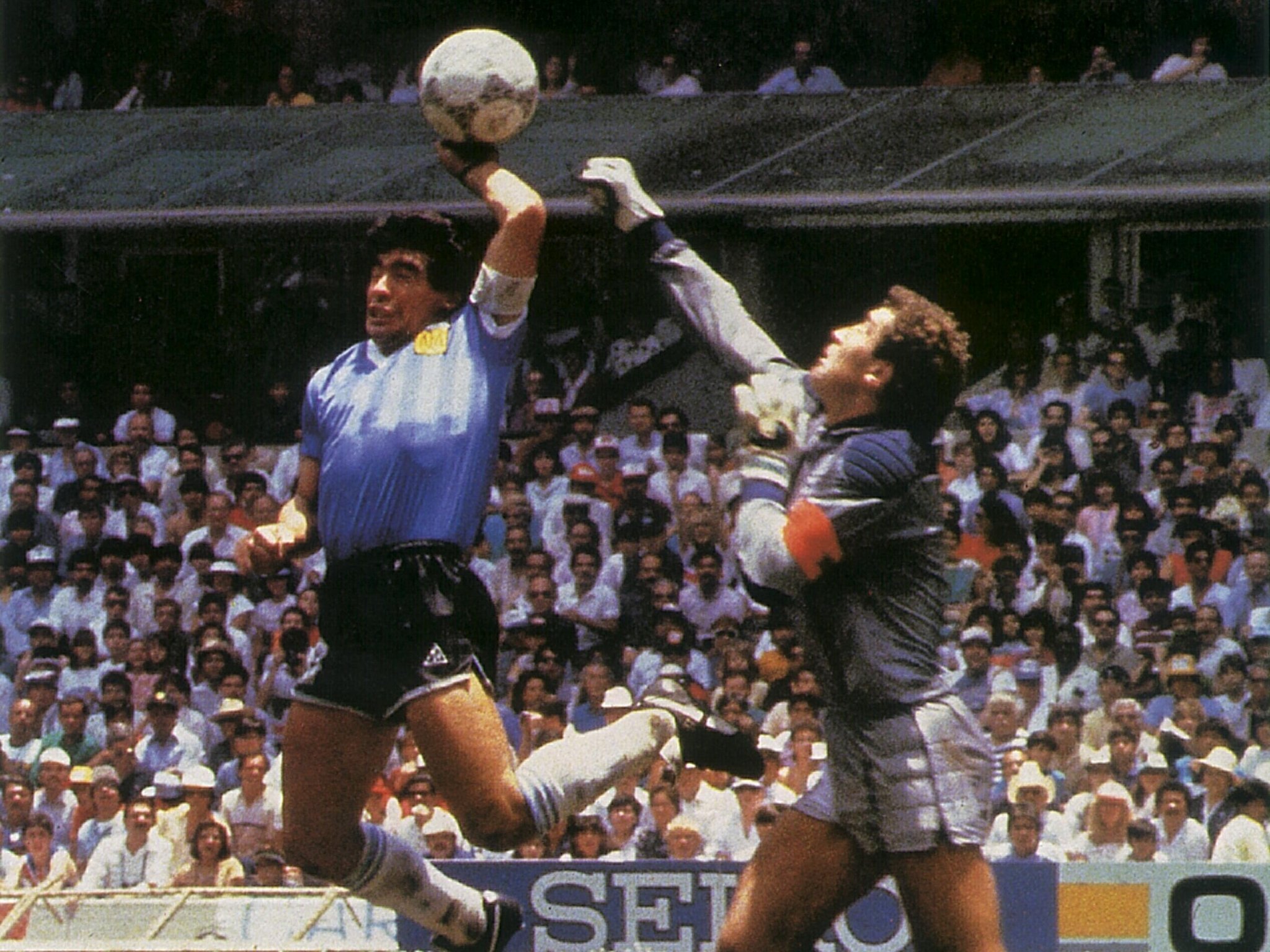