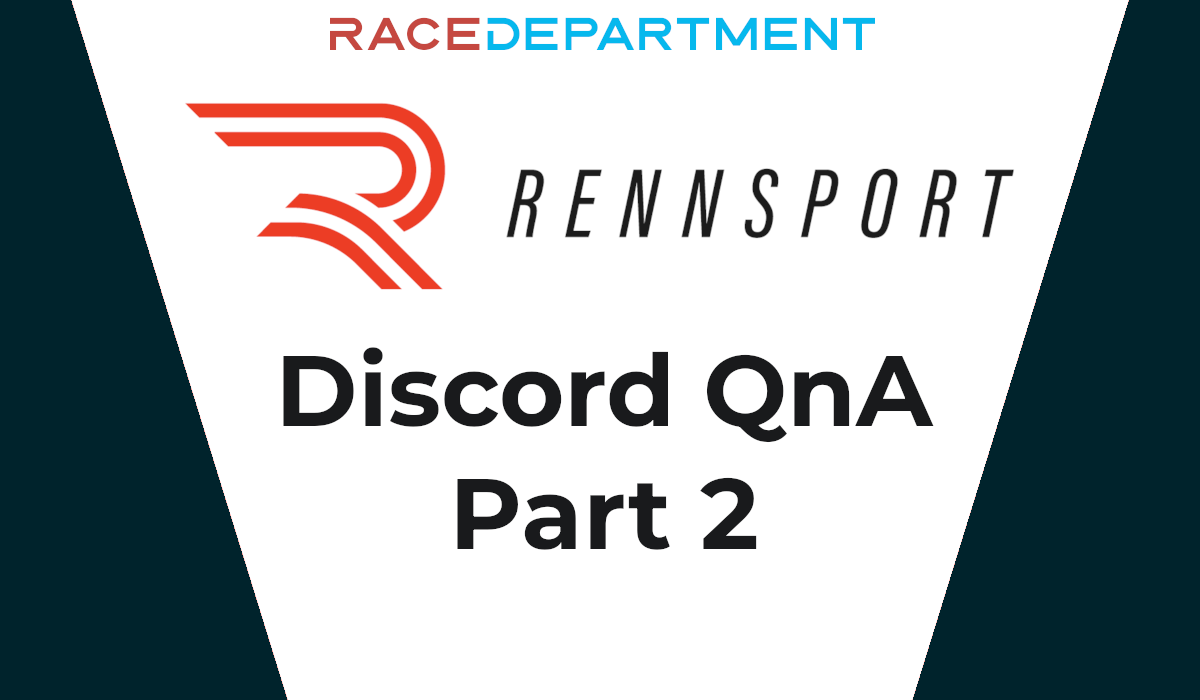 The Short and Concise

Rennsport held a Discord Q&A session recently. In it, some questions were answered by Competition Company GmbH CEO Morris Hebecker and Game Development Lead Krzysztof Szczech. This is the second part of our Rennsport Discord Q&A Articles.

The Short and Concise Paraphrasing​

25. Can you hit other people in the pitlane?
Morris Hebecker: We need to discuss this. No decision has been made, but both are technically possible.

26. Will driver swaps in endurance races be supported?
Krzysztof Szczech: Yes, we definitely have that on the roadmap. Not for the closest releases but we plan to add it once we have some more mechanics for endurance.

27. Is creating an in-game team possible, e.g. one team owns a lot of cars and gives them out to drivers for series?
Morris Hebecker: Yes, you can just manage a team as well.

28. Any news on the ESL partnership and where it’s going to lead? And a brief description of the competition aspect you’re planning on?
Morris Hebecker: ESL has been one of our earliest partners. There will be a league starting in February together with ESL.

29. What features and content can we expect from the closed Beta?
Morris Hebecker: New race tracks and some new cars.

31. What is some upcoming content?
Morris Hebecker: We've got the Audi R8 coming up, which is just the first car in the new Audi partnership.

32. Rennsports sounds like everything for everyone. What is the primary goal of Rennsport? Which Epics have the highest priority in your Jira?
Morris Hebecker: Our main goal is to create a state-of-the-art technology that can be used without problem for the next 10 years or so. Also community involvement is the 2nd big aspect we are focusing on.

33. Can we trust a guy to make a game if he is struggling to connect to discord on his laptop? (referring to CEO Morris Hebecker having troubles connecting to the call)
Morris Hebecker: *Jokingly* No you can't.

34. Will drift competitions be possible in Rennsport? Like GamerMuscle did…
Morris Hebecker: I would like to do it but it's not currently available with our physics.
Krzysztof Szczech: Yup, for now, no.

35. What about Hillclimb tracks? Will it be possible?
Morris Hebecker: Yes and we are, we have 2 Hillclimb, and I’m not talking about Goodwood, we have 2 hillclimb tracks on our list and we will have them for the release in the game.

36. How will pitstops be done? Automatic or Manual, as in the game takes over?
Krzysztof Szczech: How it’s done right now is that you do everything manually. And we are not looking to change that.

37. Will off-road stuff also be on the cards?
Morris Hebecker: I want to, but most likely no for beta as well as final release. Maybe later.
Krzysztof Szczech: Yeah for the near future, we are focusing on doing normal racing on race tracks.

38. Could you enlighten us with a broad roadmap (now or via site) from closed beta going forward? Maybe even a voting process?
Morris Hebecker: There will be more race tracks and more cars coming during the beta phase. Q2 or Q3 next year should see us publishing more features of the platform.

39. Voting: Public can vote up a feature.
Morris Hebecker: Community engagement is really important for us, for now, we are going to do votes via discord.

40. How will track limits be handled?
Krzysztof Szczech: Like in other games, keep the tyres between the white lines.

41. How are the settings saved? Via config file or different?
Krzysztof Szczech: Settings, set-ups and the like are all being saved on our online platform to be reachable whenever via the game, ecosystem or mobile app.

42. How is the stability so far with multiplayer racing?
Krzysztof Szczech: I would say pretty good.

43. Is split-screen a considered option?
Morris Hebecker: No, it’s not a thing we have on the list at the moment.

44. Will the subscription be like EVE Online or iRacing? As in Subscription gives you all content or do you still have to buy DLC, even with the subscription?
Morris Hebecker: Subscribing brings you into the online ecosystem, where you then can buy DLC.

45. Will there be seasons where you have to stay in the same car to not have everyone choose the meta car for each track?
Morris Hebecker: Everyone can set it up as they want.

46. How will BoP be dealt with?
Morris Hebecker: We have 2 guys who are super close to motorsports. They deal with that. It's an important topic and we have been working on that for months.

47. Can people compete online against cars that they do not own?
Morris Hebecker: 100% yes.
Krzysztof Szczech: I don't see any reason why not.

48. When will Closed Beta start?
End of the year. 50% of the keys will be first come-first served. the other 50% are randomly selected. You will receive an email if you signed up for it.

49. Will closed beta be under NDA?
No. You can share everything you want on social media or the like.

The un-paraphrased details of this can be found on the next page of this article.

What is your opinion on this news? Let us know in the comments down below!
Next page: Full Length Transciption >
Reactions: Wolf WolfZ, Jim Layee, Tarmac Terrorist and 3 others
About author

so no single player ?
As far as I understood it there will be single player, usable in the Free-to-Enter environment. The "always-online" from the title refers to the possibility of always having to have internet connection, even if you arent racing online.
Last edited: Nov 7, 2022
No VR and subscription based e-sport, love it when decision are easy to make.
Eep...

Gonna have be able to try it for free first... Then it's going to have to be bloody good...
If their physics don't allow drifting then I don't have much belief in this being anything more than German iRacing with GT3 cars only.
34. Will drift competitions be possible in Rennsport? Like GamerMuscle did…
Morris Hebecker: I would like to do it but it's not currently available with our physics.

So what happens if you oversteer? Does your car explode or do you just iRacing off the track?


44. Will the subscription be like EVE Online or iRacing? As in Subscription gives you all content or do you still have to buy DLC, even with the subscription?
Morris Hebecker: Subscribing brings you into the online ecosystem, where you then can buy DLC.

To me this sounds like subscription only if you want to play online.

Morris Hebecker: Yeah, it will the this way that the subscription is the way to open up the whole ecosystem, where you’ll be able to create leagues and managing your garage, yeah, playing online and all these things. And, there will be definitely in the subscription some content as well, race tracks, cars but definitely there will be a lot of items, cars and so on which you can buy on top of that.

Last edited: Nov 7, 2022
Jesus, oversteer = drifting? That's quite a logic leap. But considering how people misuse words like "slip angle" all the time, it's no surprise.

Anyway, spending money to buy the possibility to spend more money sounds idiotic. I didn't do it for iRacing, I will not do it now.
This has serious flop potential with this iracing payment model. In iracing people pay for the opportunity to race with a large userbase, if that needs to be built from scratch... They probably need a long "free" period to get that userbase or some real differentiator in the driving or graphics itself (not that likely from what I saw).

NobodyKnowsReally said:
Jesus, oversteer = drifting? That's quite a logic leap. But considering how people misuse words like "slip angle" all the time, it's no surprise.
Click to expand...

If you lose the rear and try to catch it by countersteering, the only difference between oversteer and drifting is if it's done on purpose.
Subscription model and VR will be one of the main talking points on this title.

Everyone better get their minds used to subscriptions/rent to buy because it's the new way forward and it doesn't only apply to Sim racing.

On the positive, having sub for online separates the seeds from the sticks.

Gevatter said:
If you lose the rear and try to catch it by countersteering, the only difference between oversteer and drifting is if it's done on purpose.
Click to expand...

Lol no. Oversteer is a condition. Drifting is a pointless technique. Oversteer does not necessarily imply opposite lock.

Anyway the main point is that you drew that conclusion just from the fact that they said they were not going to include drifting competitions. "it's not currently available with our physics" could mean anything.
34. Will drift competitions be possible in Rennsport? Like GamerMuscle did…
Morris Hebecker: I would like to do it but it's not currently available with our physics.
Krzysztof Szczech: Yup, for now, no.

Hmm, thats a bit worrying
Interesting stuff. Thanks for taking the time to do the concise paraphrasing, makes it so much easier to digest all the info.

I doubt this will be for me as I'm not sure I can justify a subscription fee, but will remain open-minded until I see the pricing model in more detail.

I also race exclusively in VR, so that curtails my interest until it's implemented. However, once it is implemented, it'll be interesting to see how good it is - will be it be awful like ACC or great like AMS2/AC? This is certainly Intriging though.
Not being able to drift is worrying, especially since it's not "available" in the physics.

Over and understeer with tires that slip is the main concept of a driving simulator. Without that you are not simulating anything. So this is a bit worrying isn't it?
Subscription and online, key words to fear...
Okay so unless Rennsport does something extraordinary or the pricing will be very generous, I don't see myself going into it with its planned business model.

Julian Strasser said:
The "always-online" from the title refers to the possibility of always having to have internet connection, even if you arent racing online.
Click to expand...

So just like RaceRoom, a forced "always-online" DRM where you can't play if you don't have an internet connection? If so, no thank you. In the Steam era, it's amazing how some devs really think aggressive DRM is the answer. Assetto Corsa, Automobilista 1-2, ACC, rFactor 1-2, all work fine without an internet connection.
So:

At release : GT3 cars and tracks already available in other sims;
Subscription required;
No safety car;