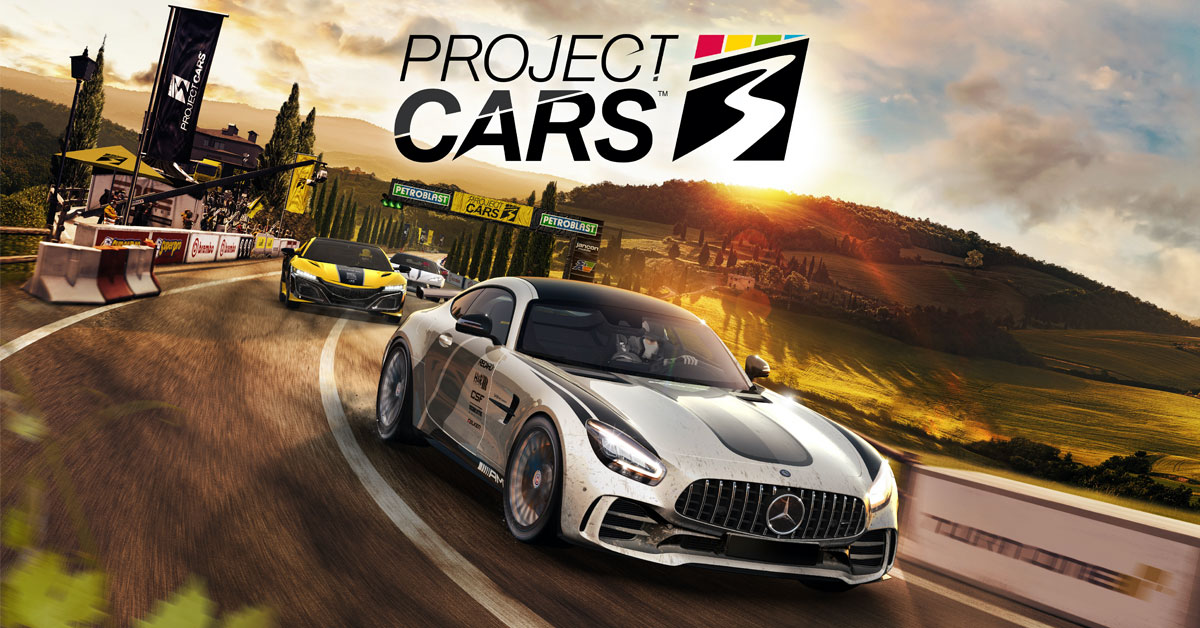 Project CARS, the project started by sim racing business veteran Ian Bell, will not live to see another game. After 3 games, Slightly Mad Studios announced the demise of the franchise today. 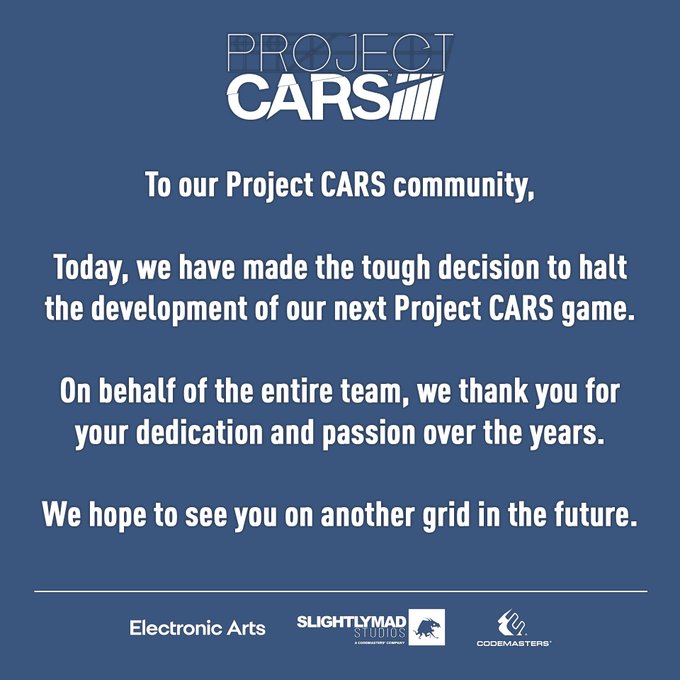 This message announced the imminent demise of the Project CARS franchise, a once shining star on the sim racing horizon.

Currently, it is unclear what exactly led the studio to drop the development of the next game. What's for certain for many people, however, is that this is only one more nail in the coffin of, what many sim racers have seen for a long time, a waste of a franchise.

What started out as an enjoyable introduction for some to the sim racing world, became an arcade title by the most recent and third instalment.

And as seen by the message above, it seems like there will not be a fourth instalment coming.

In a statement to GamesIndustry.biz, an EA spokesperson said: "Today we announced internally an update to our racing portfolio. Following an evaluation of the next Project CARS title and its longer-term growth potential, we have made the decision to stop further development and investment for the franchise.

"Decisions like these are very hard, but allow us to prioritise our focus in areas where we believe we have the strongest opportunity to create experiences that fans will love. We are focusing on our strengths in our racing portfolio, particularly licensed IP and open-world experiences, and expanding our franchises to be more socially-led with long-term live services that will engage global communities. Games are at the heart of sports and racing entertainment, and with shifting fan expectations, we recognise the need to evolve our games beyond pure play, providing experiences for fans to also watch, create and connect with their friends.

"We are working with everyone impacted by this decision to place them into suitable roles across our EA Sports and racing portfolio, as well as other parts of EA, wherever we can. Our priority now is on providing as much support as possible to our people through this transition."

Personally, I first started sim racing with a wheel on Project Cars 2, before switching to Assetto Corsa and Assetto Corsa Competizione. So this announcement doesn't go past me without any emotion.

But more importantly, what do you think of this announcement? What is your history with the Project CARS franchise? Let us know in the comments down below!
Reactions: carlton999, Verde_msk, gamer19 and 32 others
About author

Shock horror
Such a fail with PC3 has a cost
Good
I have regretted my PC2 purchase. The only one of the trilogy which I played, and I was not overly impressed.
I'm so going to miss this series.
They knew how to hype a game; I'll give them that they got me twice. Taught me to be skeptical of anything in sim racing with the cliche catch words such as innovative or groundbreaking, and in particular if the focus seems to be eye candy. If it looks too good, it's probably for a reason.
Project CARS was a fun simcade racer on Playstation back in the day. PC2 failed to make good on the promise, and we all know what happened to PC3. Shame to see a promising name go down on flames, but they brought it upon themselves.
Whatever you think of PC2, SMS, Ian Bell.. it is sad to see a sim developer go because of "licensed IP and open-world experiences, and expanding our franchises to be more socially-led with long-term live services that will engage global communities" and "the need to evolve our games beyond pure play, providing experiences for fans to also watch, create and connect with their friends."
Let me translate: appealing to the masses Twitch bland milkable social car games as a service with microtransactions.
Last edited: Nov 8, 2022
PCARS died when they announced that 3 would be arcade
Is PC3 who killed the franchise for reasons we know. Moreover, Ian bell and his new team work on a new game : GTR Revival. Too much racing games, kill racing game i think
Not surprising. I got the first two, nice looking, I think I liked the physics better than AC?, can't remember, haven't played it in a while. Spotty content. They'll probably make another GT3 simcade.... b)b above looks like he pretty much nailed whats really going on..... They didn't seem to care about the work.......
Last edited: Nov 8, 2022
Luckily Automobilista 2 will preserve end extend the great foundation of the madness engine - the Project cars team has created. Its now in the right hands
I am fully aware of shortcomings of every game in the series, yet I've found a way to enjoy what shined in all three titles. And I was more than willing to give the fourth a go as well, especially considering rumours about renewed focus on simulation.

So I'm sad and angry with this announcement. I hope that not whole SMS's legacy will go to waste with transitioning devs between different teams inside EA...
We will never see what future iterations of the Madness Engine could have been, in term of advancing physics, graphics and other stuff. I hoped to see it implementing ray-tracing...
Really sad and a technical waste.
(that's assuming EA will never use the Madness Engine for upcoming games, which is more than likely since they are disbanding the people who made it).
Last edited: Nov 8, 2022
Wait, there was a 3rd version of Project Cars?
I'm so not going to miss this series.
I played a fair amount of PC and PC2 on my XBox. Once I got my PC with VR, I played a lot of PC2 career mode and really enjoyed it. I think the last time I touched PC2 was the evening I got back from seeing Ford v Ferrari and firing up the classic Le Mans layout with the GT40. And after driving it a bit I remembered why I preferred the physics of the other titles I own.
Had some great times with the PC games.

As i mentioned in a previous post, i spent a number of hours in PC2 last weekend and really enjoyed some of the cars, the F40 for instance is great fun, so is the RS200 (try it round the RX track at Knockhill! fantastic, especially in variable weather). You can dl a ffb mod which really improves things and some of the driving experiences due to this become really good imo.

On a side note, i loved the fantasy tracks, the Scottish one, Azure and American highway, would like to see more of these in other sims, AC has a good one in the Highlands. With all the tech at Developers fingertips, they could make some absolute belter long drive fantasy tracks.
PC1 had promise
PC2 was ok, but disappointing
PC3 was just trolling 'hardcore simracers' by that point