RaceRoom Racing Experience will soon be getting new content, including the Interlagos circuit and a new open wheel car.

RaceRoom has used the 28th anniversary of the passing of Brazilian racing superstar Ayrton Senna to announce that the most famous Brazilian racing circuit in the world is soon to join their title.

Autódromo José Carlos Pace, better known simply as Interlagos, is the hilly and windy circuit home to the Formula 1 Brazilian Grand Prix. No date has yet been confirmed for this release, though RaceRoom is typically quick between their announcement and release dates. 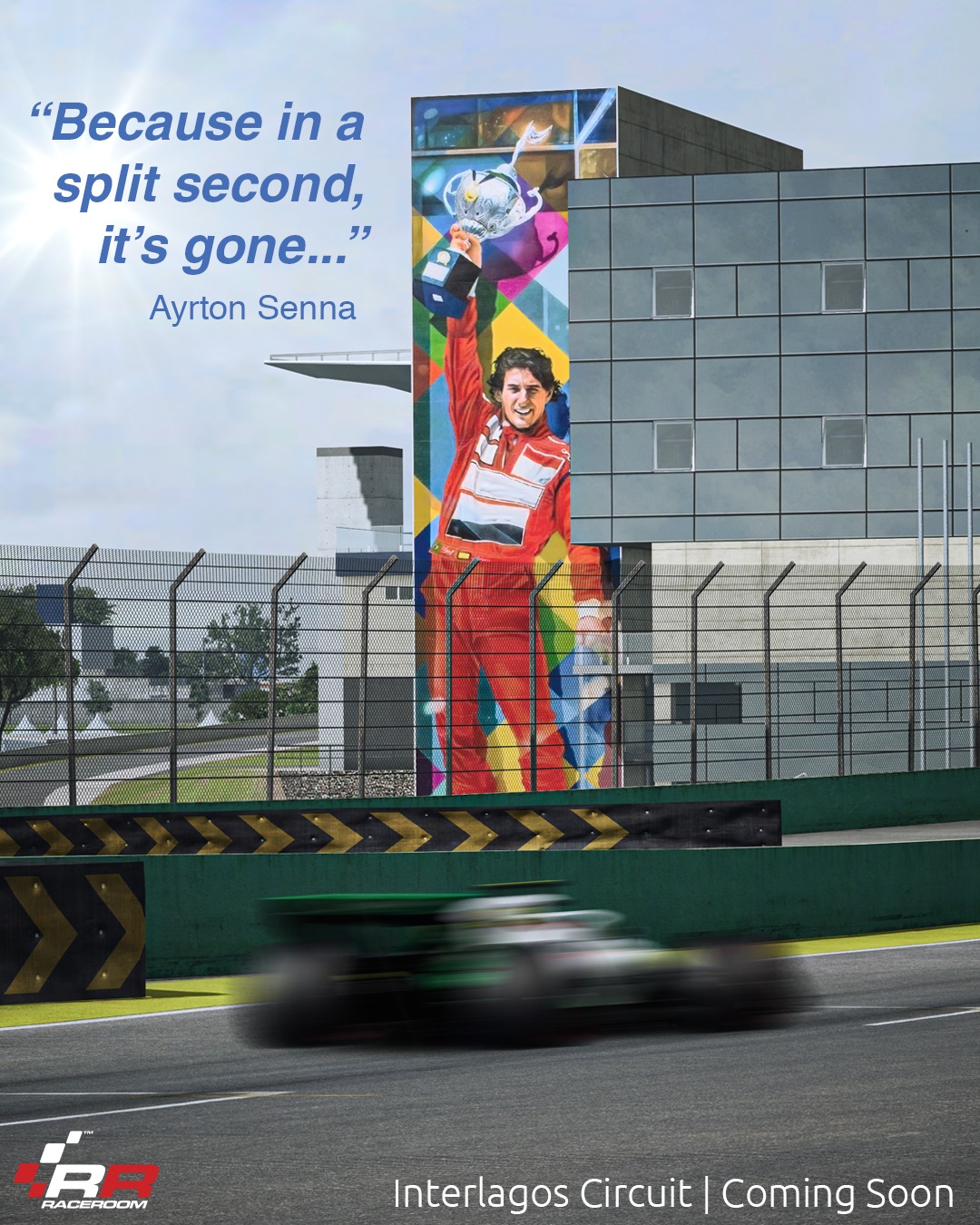 What may steal the headlines for RaceRoom from this announcement, however, is the blurry shape below the Senna tribute. Clearly an open wheel race car, this could very well be a modern Formula 1 inspired car.

There was no direct mention of what this car is in the announcement text, but a halo can be made out, and perhaps a rounded rear wing similar to the 2022 cars. RaceRoom offers a wide range of cars, but modern F1-inspired cars have been notably absent, so fans of the title will be hoping this new car does turn out to be a recent version of a Formula 1 car.

This news comes shortly after the release of the 2021 WTCR cars for RaceRoom, and shows that the development team is still hard at work behind the scenes of the racing title that will celebrate the 10th anniversary of its release next February.

Will you drive Interlagos in RaceRoom? Would you like to see more modern F1-inspired cars in the title? Let us know your thoughts on Twitter at @RaceDepartment or in the comments below!
Reactions: Maddin71287, Skinny McLean, XhendrickX and 5 others
About author

Will you drive Interlagos in RaceRoom? Would you like to see more modern F1-inspired cars in the title?

Good to see more content coming to the title, but I will be passing on this content as I already have this combo in 2 other sims.

Both with a more immersive driving experience, with day to night transition, dynamic track heating, loose surface physics...and one with dynamic weather.
Last edited: May 1, 2022
Is it Tom Cruise ?
The FR-X17 drives VERY weirdly, so hopefully the FR-X22 will be more refined. At least they have the porpoising simulation already included...
Interlagos is fantastic. But i want Donington.
A more modern Formula class with halo, based on F1 2021 would be amazing, but I hope that there will be not only one car with one livery! I hope for a new Formula class with multiple liveries.
Guess that they won't be back after AC, AMS2 and since yesterday rFactor2 too as they all have now their corresponding F1 2022 season spec cars.

I was really surprised toyday when I saw the mod for rFactor2 in the workshop (which is really good, a video is already visible in the media section here at RD !)

So far I can say that at the moment AMS2 has the best adaption regarding combination of graphics and physics, where AC tops the graphics of AMS2 and rFactor2 now is top on physics.

AMS2 at the moment is the allrounder that brings 2nd best of both worlds together and therefore is Nr. 1 now.

Let's wait and see what RaceRoom will give us, but even the missing possibility of applying mods will leave RRRE behind, though I expect that physics will be great
that new car carrying new DX11 upgrade

Could be Mr. Senna's great old car ?
Oh, wait... no jet flame in back...
must be all electrical then...
Last edited: May 1, 2022
One of my favorite tracks but what this sim really needs is a graphics upgrade, get it in UE4

The_Grass said:
Is it Tom Cruise ?
Click to expand...

I don't know much about Interlagos, so this will be a good treat for me. As for the car, it's about time KW Studios released it. I was beginning to wonder if it was ever going to drop.

Probably a bit of Photoshop retouching
S3 is still developing this game?
"Mystery car" on the picture = F1 car of modern era.

If Brazillian Senna tribute though, it has to be a release combo of 1991 Interlagos + MP4/6 with implemented gear obstacles when car enters closing laps
Last edited: May 1, 2022
Please upgrade this sim to DX12...
I'm sad, without new graphics, I won't play anymore with raceroom, but I'm happy for the fans, it's nostalgia.
the car in picture has the halo of modern f1 cars so... when night mode in RR? wheather? i just uninstalled that game even tho I own almost all dlc's, it makes me mad seeing they add more content and other stuff is left outside, and with weather the tire system must be revised, that wont happen any time in my life, so for me this game is dead. When I heard the new GTR3 is coming I started investing in RR thinking i can help the development of that one, no hopes I guess
Last edited: May 1, 2022
Interlagos is very cool but a F1 2022 I'm a little afraid for them knowing that its on other more modern sims. The comparison can be quite painful and the management of the hybrid a question?

dave kirk said:
One of my favorite tracks but what this sim really needs is a graphics upgrade, get it in UE4
Click to expand...

You mean NO UE? UE is the most terrible engine for race sims, because it doesn't work properly with VR.

But let's hope that this is the last update for RaceRoom so that we can have a RR2 announcement soon. This sim had it's best time, it needs a new engine with proper VR support/better graphics; everything modernized.

TeddyBearx said:
I'm sad, without new graphics, I won't play anymore with raceroom, but I'm happy for the fans, it's nostalgia.
Click to expand...

Give it a rest. We all know you don't want to use it anymore.

As a VR user I think it looks better than ACC if you've not got a 3090. Yeah it's a little bit 'flat' with the lighting but it's sharp and most importantly - immersive.