Article Gallery Discussion
The European arm of the Ferrari Velas Esports Series kicked off this week in fine style, with four entertaining races and 12 drivers progressing to the next stage of this exciting championship.

Changing pace from the traditional format associated with Ferrari Esport activations of previous years, this season began with not one but four qualification races, where drivers would be pitched against each other in both Assetto Corsa and Assetto Corsa Competizione on four very different circuits. The goal for each race would be simple, secure a top three and qualification into the European regional finals.

The Nürburgring Grand Prix Circuit is a great example of how (relatively) modern racing venues can still produce exciting racing, and for this opening round, the excitement was certainly on show - albeit behind a dominant top three drivers.

Never quite looking like relinquishing his hard fought Pole Position from qualifying, Jonathan Riley was in imperious form throughout this opening encounter, converting the pole into an unassailable race lead from the rolling start despite a spirited challenge from Ivan Shermetinskii in the opening corners - this would be a race that firmly marks Riley as a driver to watch as the series progresses.

The real fight of the race would be for the final step on the podium, and with it that golden ticket to progress to the next stage of the series, as Leonardo Pagano withstood intense pressure throughout the 30-minute event from Federico Pedrini behind, the Italian just coming up short in his attempts to overtake as Pagano crossed the line an eventual, and relieved third place. 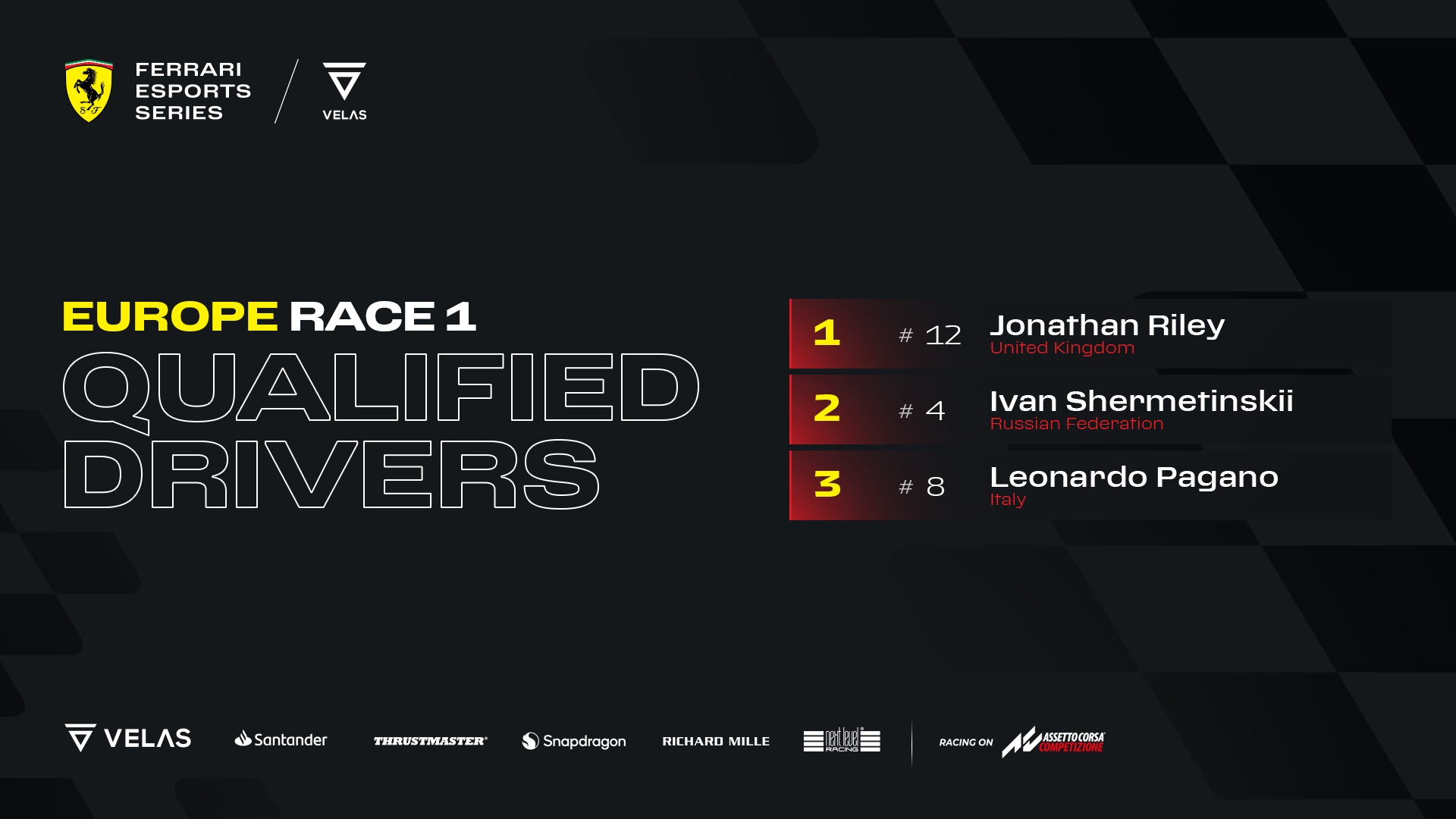 Race 2 of the evening would be held at the iconic twists and turns of the Laguna Seca circuit in North America, a welcome addition to the series and a track that many thought would be a pressure point for the drivers heading into the series, thanks to the unforgiving nature of the track, and ever present danger of running out of road at any one of the many challenging sections on this short, yet sweet US circuit.

Now transitioning to Assetto Corsa, the standing start for this one would prove critical for Tauras Gudinavicius in the #11 machine, as the Lithuanian driver easily fought off the challenge of Maichol Tonizza behind.

The biggest winner from the race start would be returning Ferrari Velas Esports Series hopeful Niko Puntola, the Finnish driver making a fine getaway from the line to snatch third position into the Andretti Hairpin, a move that would prove crucial for the #12 driver as he found himself in the early running for qualification from this opening racing segment. As Gudinavicius frankly disappeared up the road, Tonizza and Puntola would play a steady game of cat and mouse throughout the race for 2nd and 3rd places, with the end result eventually reflecting track position at the conclusion of the opening laps. 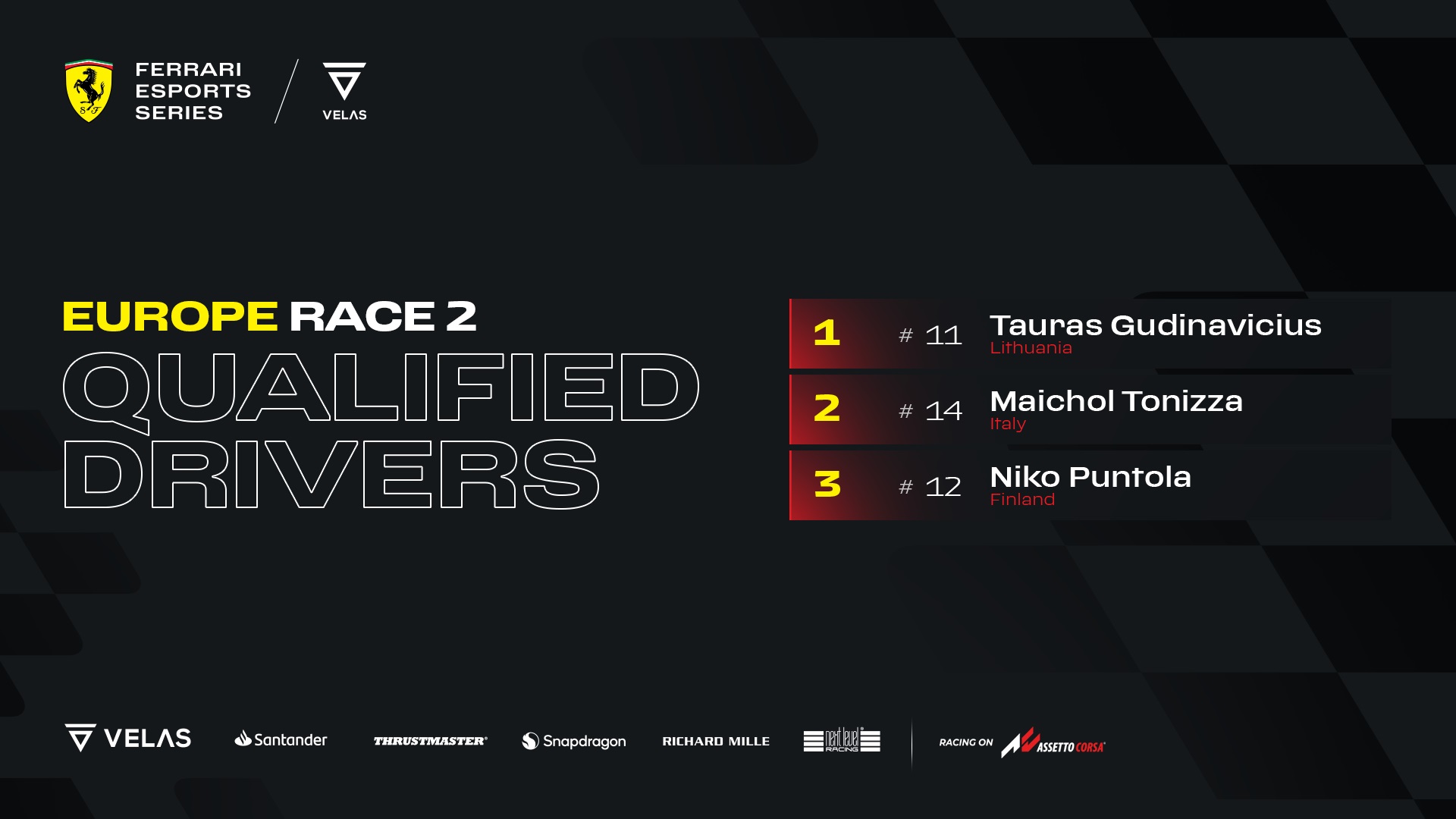 The third race of the day would be held at the Dutch Zandvoort Circuit, again in Assetto Corsa Competizione, and this time behind the wheel of the mighty Ferrari 488 GT3 Evo 2020 - a car many sim racers will find themselves familiar with, even if not quite in the white-hot heat of competition offered up by the Ferrari Velas Esports Series.

Continuing a theme set in the opening two encounters, Pole Postition would prove to be a crucial advantage in this race, as Michael Romagnoli used his early pace advantage to get the jump on the field on the rolling start run down into the Tarzan Hairpin for the first time.

An early stab at stealing away that race lead by Antonio Fedele would come to nothing for the Italian, however the deep entry into T1 and the following scrabble for grip on corner exit would not be punished, as third place Marcin Swiderek found himself more than occupied keeping at bay the chasing pack behind. Speaking of said chasing pack, early contact would put pay to the hopes of several drivers in the early laps, all while the top three continued serenely on at the front of the field. 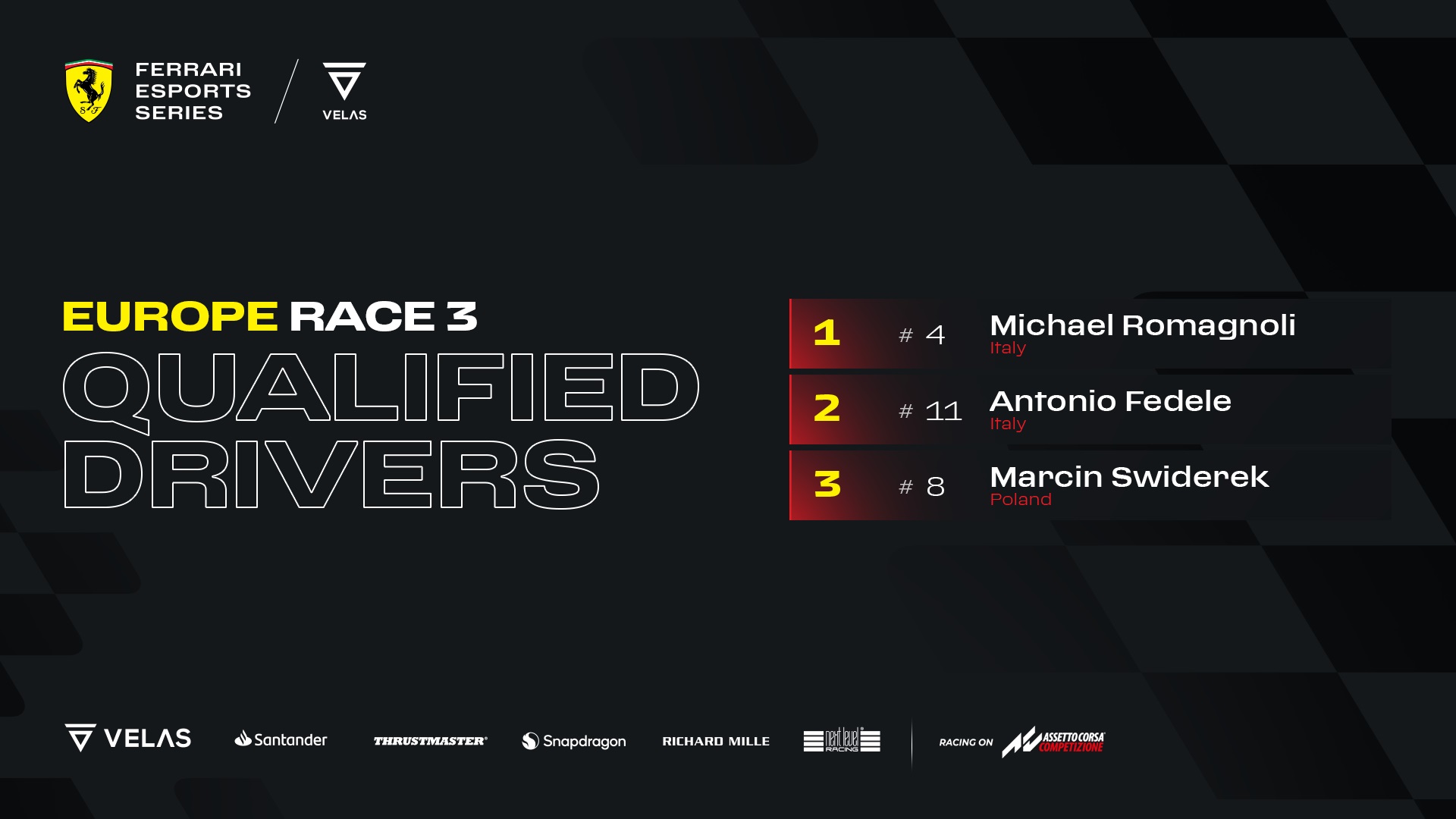 The final race of the opening broadcast for the 2022 Ferrari Velas Esports Series would take place at the temple of speed that is Monza, a fitting venue to conclude a fine evening of racing hosted by the Ferrari team in Italy.

Certainly a circuit where it is highly possible to overtake, the drivers of this final race would be determined to both put on an entertaining show for us at home, as well as grasp that final opportunity to earn a spot in the series regional finals later this year.

Up front, Wojciech Lukaszek of Poland would be the man firmly in control of proceedings right from the green flag, the driver of the #11 machine immediately grabbing an early race lead from 2nd on the grid, dispossessing Adrian Kot following an horrendous start for the pole sitter.

With Lukaszek firmly established at the front of the field, it would be a fascinating recovery driver from Kot, with several brave overtakes being performed behind the wheel of that Ferrari 488 GT3 Evo 2022 for the #4 machine, eventually recovering to second overall having fallen as far as fifth by the first chicane.

Kot wouldn't be satisfied with just securing a qualification spot, and in a fine piece of racing action the Polish star managed to wrestle away 2nd from Sandro Tavartkiladze with just 10 minutes left on the clock, performing an impressive outside / inside move into the second chicane for what was certainly a contender for overtake of the night. 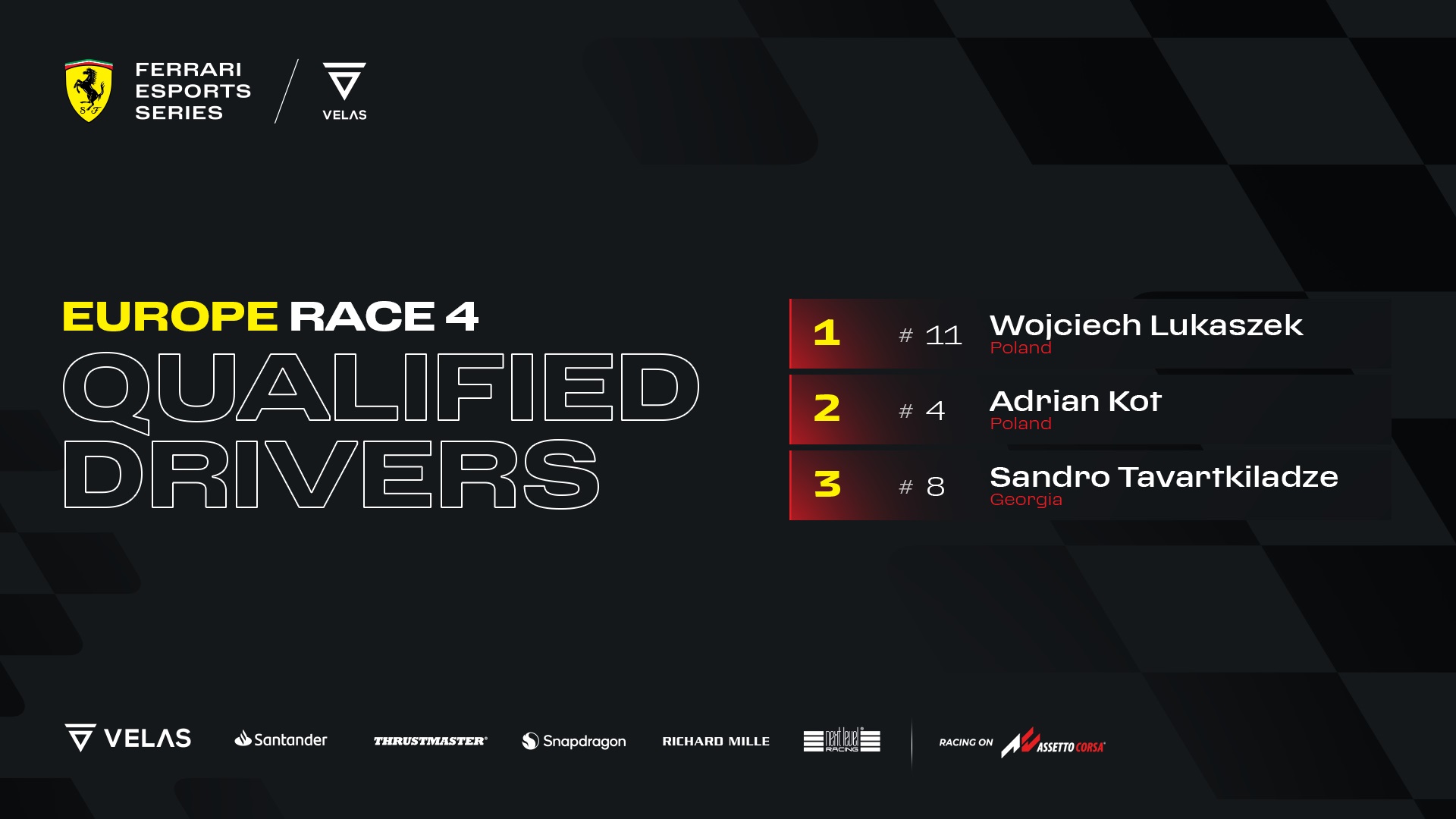 All in all, the opening European broadcast provided plenty of action and talking points for the audience at home, and another very fine example of the quality levels achievable from the sim racing community when given the platform on which to participate.

Following the conclusion of the activity for this opening event, drivers will be busy working their way through the process of qualification ahead of the second set of qualifier races, with the next European broadcast set to take place on the Ferrari Esports Twitch channel this coming September 5th - make sure you don't miss out! 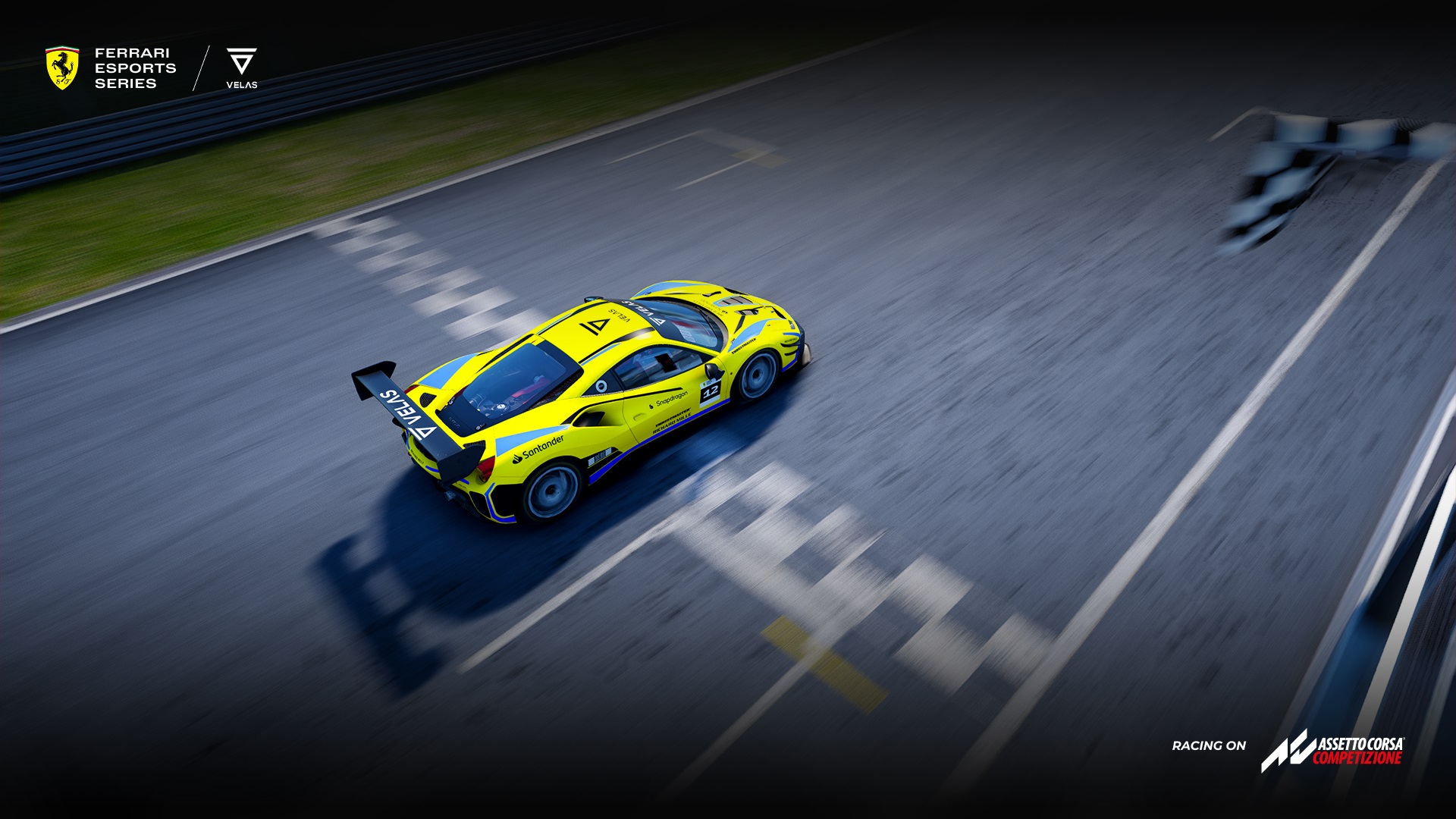 Reactions: Dzul and Gabyzen64
About author