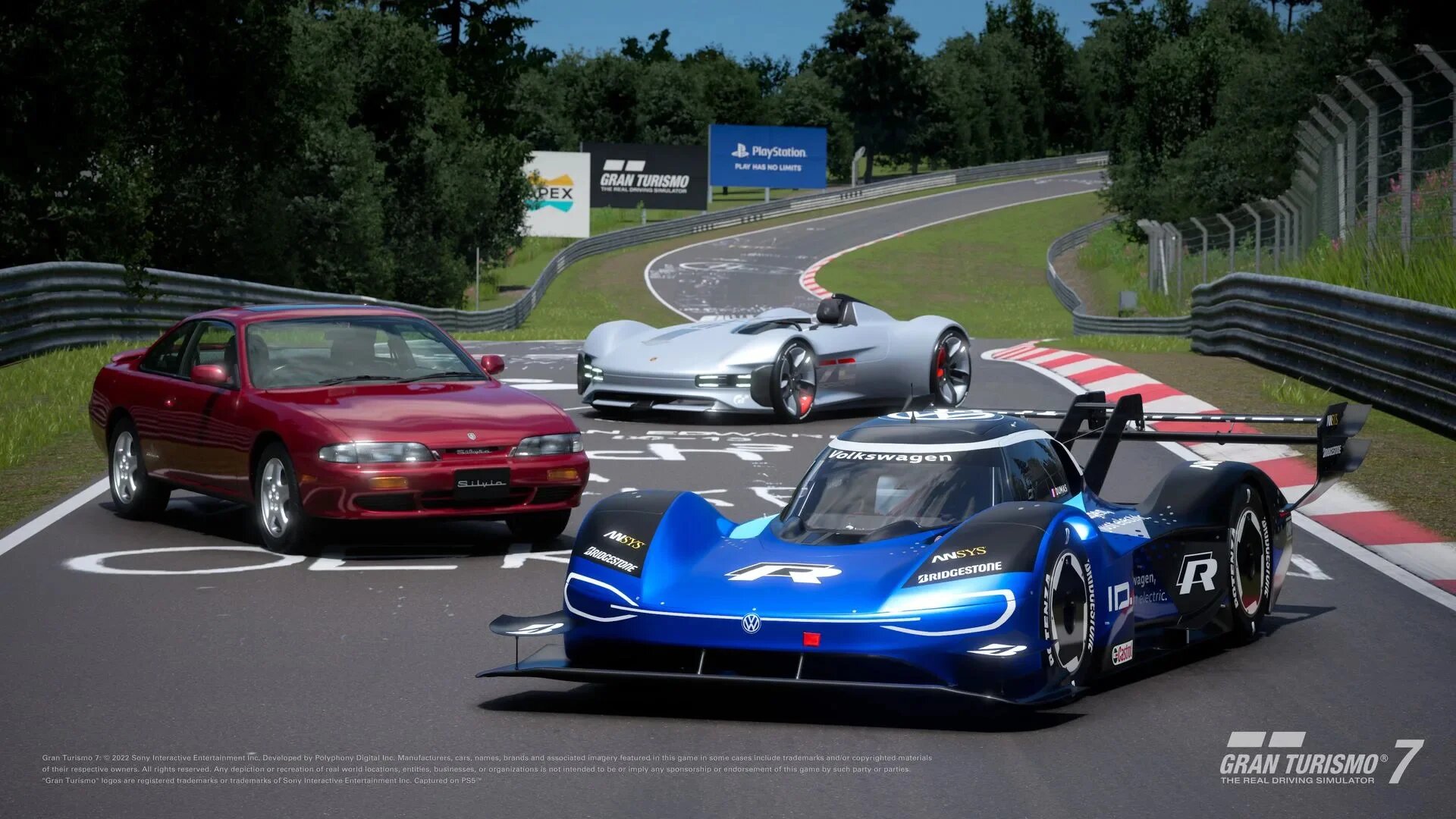 Polyphony Digital deployed a new update today, keeping up with the usual schedule. Interestingly, version 1.22 was skipped, which is usually the sign that a major bug was found and fixed before the rollout.

The community reactions will probably not be the greatest following this update for a couple reasons. The first being a tweet from outsourced Gran Turismo socials hyping up the date with objectively no good reason, leaving followers to expect more content to be included in addition to what was already teased, aka 3 cars:
As it turns out, nothing significant is to be found in terms on content aside these cars and a few new solo events around them. And on a sidenote, the official patch notes are wrong regarding the Nissan, as it is found in the regular used cars dealership instead of Hagerty's Legendary Cars.


https://twitter.com/i/web/status/1574821179226935296
The second reason will come from the following adjustment to the Performance Points system:
Changed the calculation of the Performance Points (PP) in ‘Car Settings’ so that measurements are taken with stock Differential Gear (LSD) and Suspension settings.

This effectively puts the nail in the coffin to the most effective money grinding methods currently available in the game, which used setups to break the calculation process into fitting the fastest car of the game within half of its original PPs to enter a specific event. The change makes sense in terms of balancing that system out, and preventing players to use that type of exploits in PP restricted online events, so it is ultimately a healthy correction, even though it surely will bring back the demand for better in-game payouts.

As usual, new engine swaps have been included, although there's no hint about what they are. The community already found out2 of them: the Suzuki Cappuccino can now be swapped with a 13B-REW rotary engine from a Mazda RX-7, allowing you to give the fun sized kei car a real caffeine kick with more than 500hp in a less than 700kg chassis, and the mark 2 Audi TT can bear the 4.2 V8 from it's big sister.

An unexpected new engine to swap has also been found: the Suzuki Escudo Pikes Peak V6, although what chassis it can go into is still unknown at that stage. 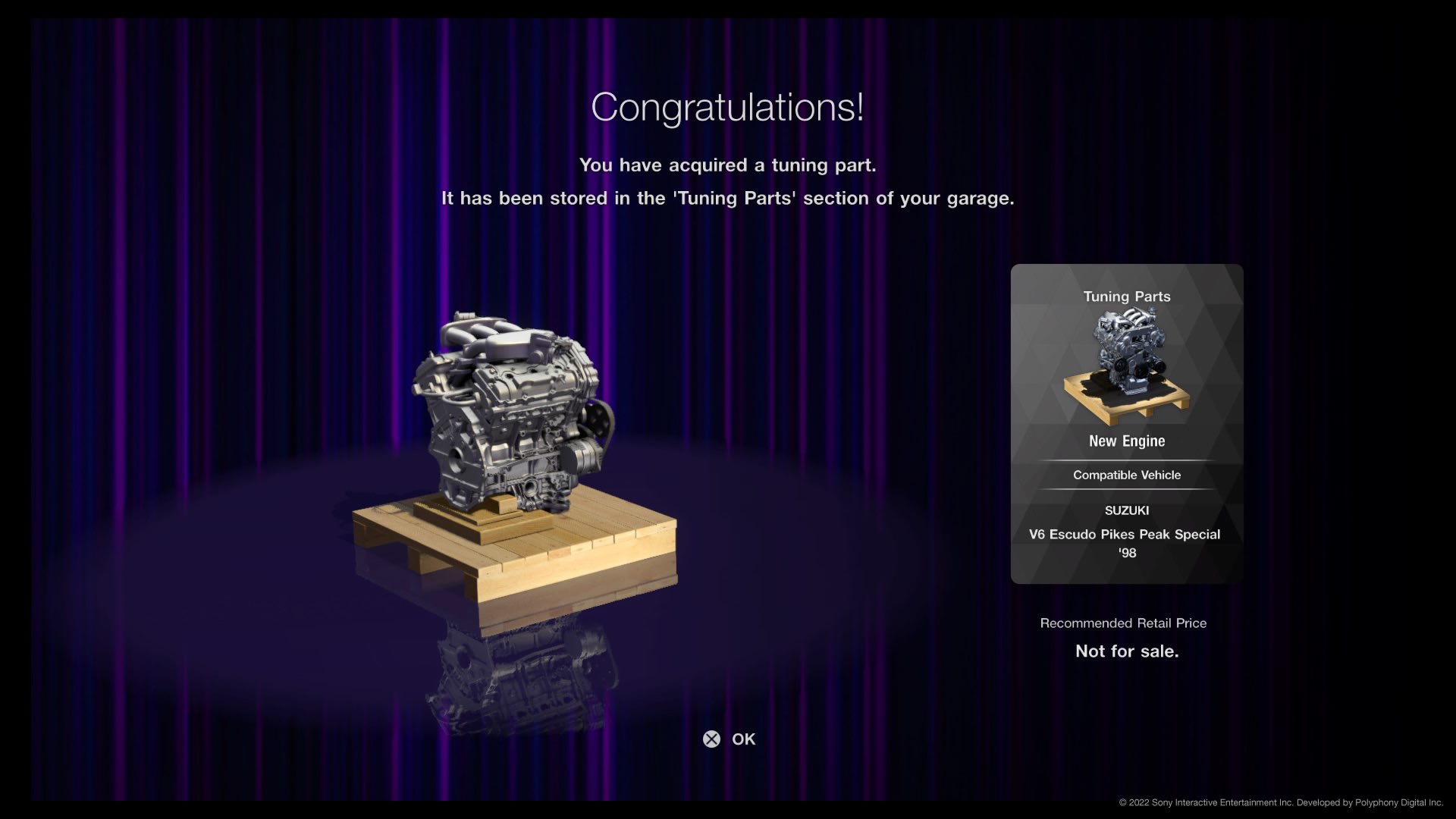 Network connectivity is said to be improved, although it is not clear if it concerns sport mode, lobbies or both. Regardless, the lack of more rpecise informations means this will need to be verified and tested in-situ, as it could as well just be a targeted fix towards recent sport mode issues, where whole splits could be held hostage by a loading screen for dozens of minutes before the race finally started with only a fraction of the players remaining.

Other than that, various bugs and issues have been patched. For more details, check the official patch notes on the next page.
Next page: GT7 1.23 Update Notes >
Reactions: PocketsAF and b)b
About author

Sorry, but it makes me chuckle a bit when I see a grocery getter/baby on board sedan released next to race content as if I am supposed to be excited about it. Well, to each their own.
I've heard Alex that the Pikes peak engine goes into the Evo Final...

But to be honest I'm still waiting for Kaz to...
: allow me to adjust my seat position (GTR did that 2 decades ago)
: de-clutter my interior mirror so I don't have to button push 'look out the back'
: bring back qualifying
: provide a random selection of cars for the longer races
: have more longer races (and I don't mean 10 lap 3 pitstops)
: allow players to custom race for a reasonable prize money
: provide more races at tracks like Monza, Bathurst, SS routeX, Goodwood, the latter for historics.

But, ho hum
Last edited: Sep 29, 2022
I find it odd how the content drops are smaller for GT7 compared to GT Sport

DND said:
Sorry, but it makes me chuckle a bit when I see a grocery getter/baby on board sedan released next to race content as if I am supposed to be excited about it. Well, to each their own.
Click to expand...

Wish I'd had a s14 to pick the kids up with.
Gran Turismo 7 & Forza Motorsport Reboot are both not coming to Nintendo Switch.

Yes, I've won it after the article got published, it does indeed goes in the Evo X. The result is hilarious, but very impractical with the insane amount of turbo lag.

The Ferrari 458 Italia engine is also a new swap that can be fitted in the Alfa 4C, and you can also fit the Voodo 5.2 from a Shelby GT350 into the old Deuce Ford Roadster. I got confirmation the new swaps have all been found as well.

Lobby stability seems definitely better after a day of fiddling with them. Any issues remaining are down to the P2P architecture of lobbies and down to the individuals' connection quality, as far as we've seen today. We at IGTL are now confident enough to try hosting events again on GT.
Since the update my lad's had the game crash at the 'celebration screen' of a win at both Spa and LeMans 'enduro' races... on restarting the game the payout has been done ok...
Anyone else finding this


Edit... Known Issue!
Last edited: Oct 1, 2022
I realize GT7 isn't supposed to be hyper-accurate, but I actually owned a Honda S2000 (AP1) for several years, and the version in GT7 drives exactly like I remember it. It's uncanny.

kondor999 said:
I realize GT7 isn't supposed to be hyper-accurate, but I actually owned a Honda S2000 (AP1) for several years, and the version in GT7 drives exactly like I remember it. It's uncanny.

Because of the developer's controller pad optimisation requirement, resulting to become a Simcade.

GTxForza said:
Because of the developer's controller pad optimisation requirement, resulting to become a Simcade.
Click to expand...

The cars in GT7 drive very differently when using a gamepad.

Comparing the 2, the physics are about the same but the FFB itself in GT7 is actually a lot more what the actual AP1 S2000 feels like. The AC version feels slightly looser and less precise, but that's probably just a difference in the tires.

Both nail the defining characteristic of the car, which is momentary lift-throttle oversteer (why so many S2000's got wrecked by inexperienced drivers).

Like I said, I owned a 2002 AP1 S2000 for 6 years and drove it on track days at Eagle's Canyon (private track here in the Dallas area). The S2000 in GT7 drives exactly like my real S2000 did.
Gran Turismo is generally better with road cars. GT6 road cars physics were pretty insane in hindsight, and the FFB behavior on a few cars I'd driven IRL was spot on - even on "standard" cars, and ABS off braking on cars which were not supposed to have it is one of the best ever in the genre.

GT Sport physics were worse, even at their best, but the recent physics update in GT7 brought it back to a good spot, both for road cars and race cars. Sure, some corners are cut, tyre heat model is still very simplified, the autoclutch is intrusive and ABS off is not as good as it was on GT6 for instance, but the game currently feels like a plug & play, easily accessible AC right now. Basically, if I purely want to enjoy driving on my own, AC is still my go to, especially with the myriad of mountain pass mods. If I want a quick fix of close racing, I'll take the small trade off in physics and boot GT7 to get going without having to plan my session by manually gathering people and setting up a server 2 days in advance.

kondor999 said:
The cars in GT7 drive very differently when using a gamepad.

Comparing the 2, the physics are about the same but the FFB itself in GT7 is actually a lot more what the actual AP1 S2000 feels like. The AC version feels slightly looser and less precise, but that's probably just a difference in the tires.

Both nail the defining characteristic of the car, which is momentary lift-throttle oversteer (why so many S2000's got wrecked by inexperienced drivers).

Also to me, playing GT7 and Forza Motorsport Reboot with a controller pad feels like playing with hobby-grade RC cars like the Tamiya TT-02 for example.

Oh, sorry for my misunderstanding in my previous reply.