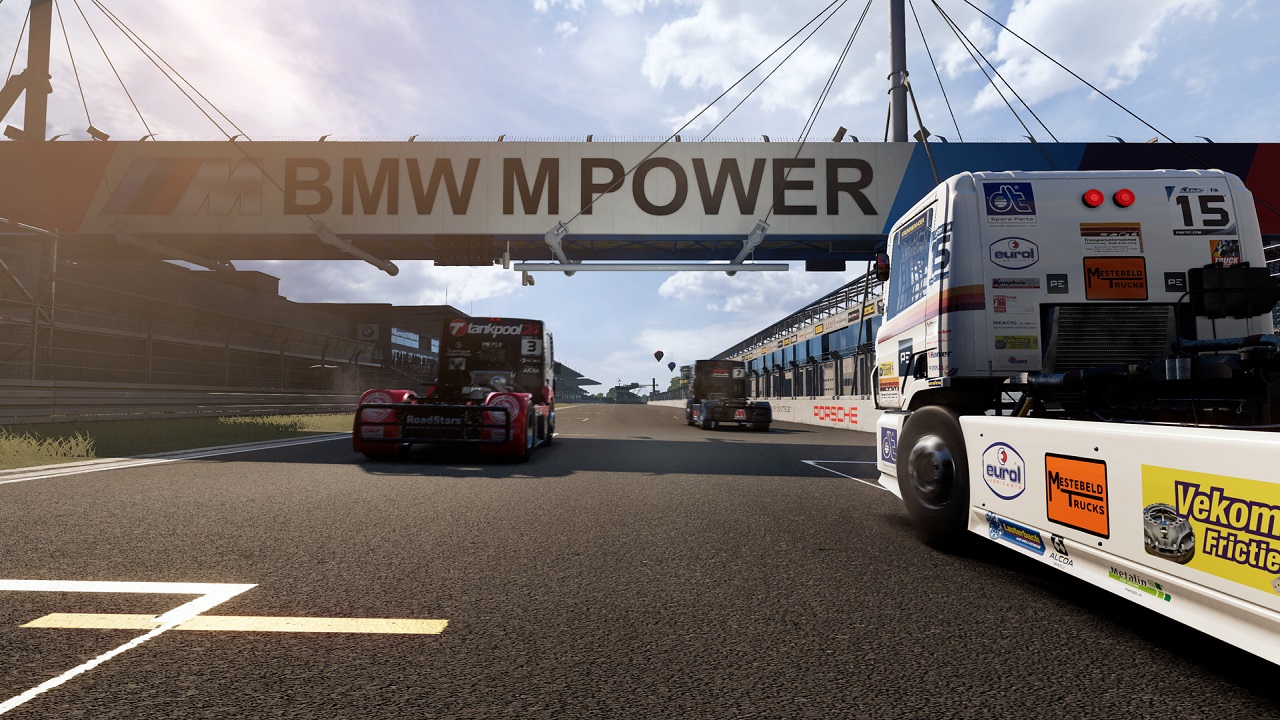 We take a look at the new FIA European Truck Racing Championship video game from N-Racing.

Having secured an official license to replicate the highest level of international truck racing on both console and PC devices, the lesser know N-Racing development team have put together one of the most curious, and potentially most awesome, racing games of this year.

Replicating the exceptional FIA European Truck Racing Championship category, including some fantastic circuits in the form of such venues as Le Mans (Bugatti Circuit) and Zolder as just two examples, the choice of series is perhaps not what one would have expected off the bat, but could well be a wise choice in a marketplace where developers struggle to find a unique selling point to left them ahead of the crowd.

From a graphical point of view the new game immediately impresses, with sharp, clear and detailed graphics throughout the on-and-off track shenanigans within the game. The title has evidently been developed with user friendly playability in mind, N-Racing seemingly keen maintain an uncluttered and uncomplicated experience for the player, offering useful explanations of the various game menu choices and detailed voice coaching throughout the various stages of the track activity within the game.

Whilst no doubt welcome for players new to racing games, some of this simplicity can become a bit of a barrier for the more experienced racer, with N-Racing having made some design decisions that take away the adjustability and control from the player, in favour of pre-set choices. An example of this would have to be the ‘Quick Race’ menu option, where after selecting truck and track, the player is instantly sent into a racing situation without the opportunity to run practice or qualification sessions.

These sort of quick jump into the action options are nothing unusual for racing games, however without the ability to set a single race type scenario with a full weekend structure, it just feels like the shift from quick race to full on championship mode is missing that vital link that helps the driver engage in the off line portion of the title.

Speaking of game modes, FIA ETRC comes with Quick Race, Online, Career and Championships, as well as online event challenges that due to the early access nature of the build I’ve been playing, I haven’t had the opportunity to yet full scope out this portion of the game.

Career mode sees you introduced to a number of driving license test activities designed to asses your ability to handle a modern racing truck. Set in small scenario portions that covers the basics of control, these tests are again mostly focused on the rookie racing game player and can feel a little laborious for more experienced drivers - especially when it is mandatory to complete all license tests in order to progress into the career mode proper. The grind nature of these tests are not helped by the fact one needs to exit and reload the next “test” after each separate assessment has been completed, leaving me to feel the opening strands of the career mode are a little awkward and poorly thought out, which upon further playing of the game becomes something of a common theme in many aspects of the title.

I’ll admit my enthusiasm for these career mode tests very quickly fell away, to the point where I abandoned further participation after just four tests. As it is mandatory to complete these before progressing into career mode proper, I suspect it will be a while before I find motivation to plough through and see what that side of the title has to offer they player. Which is a bit of a worry, as I suspect many people who pick this game up on release will feel the same way...

On to the driving model itself, this is where FIA ETRC really differentiates itself from other driving games in the marketplace today. Racing trucks are very different beasts to the traditional fare of GT, touring and formula cars - heavier, slower and less responsive than their distant cousins, which takes a while to get used to in this game but adds a very interesting and different dynamic to the gameplay experience.

One of the big things simulated in ETRC is the need to cool your brakes during the race. With water tanks installed on the truck, the player will have to keep track of brake temperature during heavy deceleration and release water onto their brakes to keep the temperature at the optimum level, avoiding getting the pads too hot and causing less efficient slowing if the trucks, or if left unattended for long periods potential damage to the brakes. With only a limited amount of water for the race distance, the player will have to be careful not to run out of cooling before the end of the event, which adds an nice (and realistic) element of strategy into he race experience.

As for the driving model itself, this is something that I’ve found to be just about adequate, but by no means are these trucks anywhere close to the physics and feedback experienced in something like the Formula Truck content of Automobilista.

FFB is functional at best, inconsistent and slightly confusing at worst. You don’t really have much in the way of feedback from the FFB wheel to tell you what your truck is doing, just what feels like basic resistance and heavy vibration when either going over trackside curbs or contacting with other trucks and trackside objects.

The trucks themselves feel somewhat prone to rear traction loss in unexpected places, however the slide dynamics are such that it is rarely too late in which to recover a sideways moment. With momentum so important to lap time in these trucks, sliding can have very negative outcome on your overall performance, and should be avoided at all costs.

It may be worth noting I've done my driving in this game using a SimSteering V2 direct drive wheel, so the experience of a user using one of the officially supported racing wheels may differ.

Diesel powered racing trucks most certainly don’t give off an emotive sound like that of a mid 90’s V12 Grand Prix car or something American and GT specification at Le Mans, but they certainly have something of a sound of their own that stands out for the crowd - especially when they power a massive 5 ton + racing truck! Here, N-Racing have done a very solid job of replicating the audio experience from the series, simulating the sound of these beastly engines and the associated activities such as dispelling water cooling and the various bumps, grinds and creams that come with racing trucks to a high level.

Trackside audio is also well produced and the menu music is bang on point (subject to your personal preference of course), adding to the general feel of the title. Tempering the good with the bad, air brake pressure release type noises are used to represent back button presses in the game UI, which get annoying after a while, making you wonder how this sort of unnecessary oversight hasn’t been identified during the development and QA phase of the game. However, that’s a very small and insignificant observation, and doesn’t distract in any way from the core gameplay value.

Overall the new FIA ETRC game edges firmly on the more arcade spectrum than thoroughbred simulation, but has many aspects of a more realistic type of title. The game feels like it suffers from something of an identity crisis, not really going whole hog into the arcade experience, nor hitching its coat on the peg of realism. The genre of racing games is a well travelled one full of very competent titles, so it will be difficult to see this game really break free for those in which it competes for attention.

The game certainly has potential and I’d like to see what lessons learnt can mean for any potential follow up release, but sadly at the moment, FIA ETRC is neither realistic nor fun, leaving it squarely in the no man's land of close, but absolutely no cigar.
About author