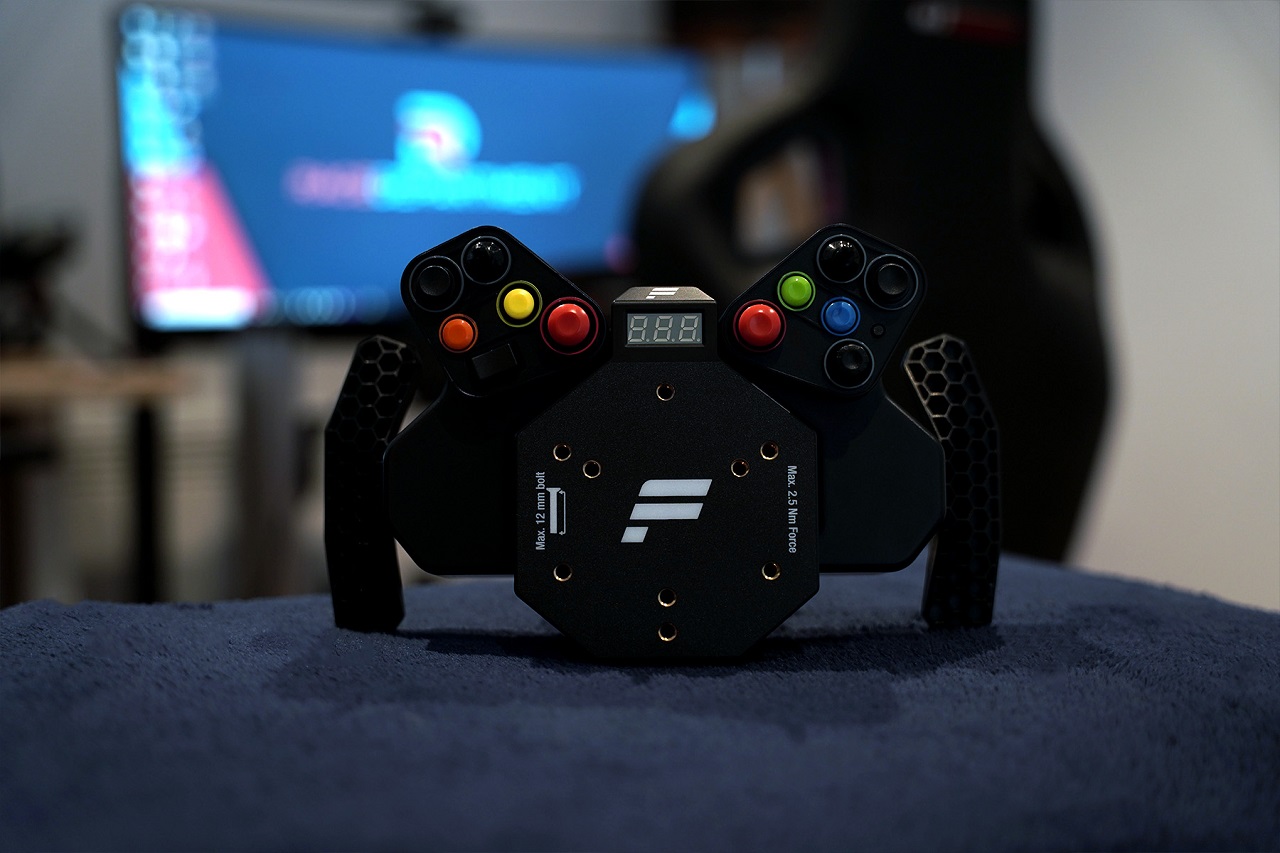 The pitch for the CSL Universal Hub is simple: Adapt almost any wheel rim to a compatible Fanatec wheel base, with full functionality, at an affordable price. But does it really deliver on that promise? We put it to the test.
Buy now from Fanatec for €149,95

When I was told that I would be receiving the new Fanatec CSL Universal Hub to test for a review I was excited, not just the usual excitement that comes with trying out new piece of kit but because this device in particular seemed to have such potential. I have been guilty of browsing eBay looking for the odd bargain racing wheel from time to time but have always stopped short of pulling the trigger as adapting it to fit my wheel base always seemed either too expensive or faffy. With the CSL Hub coming in at a reasonable €149.95 and claiming to just work right out of the box (something I’m a sucker for), it seemed like it could be the answer to my problem

Long story short, the CSL Universal Hub does fulfil the brief of turning dumb wheel rims into Fanatec compatible sim racing rims. But that isn’t the full story. There are a lot of things I like about this product but there are also a number of things that left me scratching my head and questioning whether this was really the best execution of the idea that Fanatec could have arrived at. I’ve been testing this product on and off for about five months now, and feel I have a well- rounded view on this product at this point, so let’s get into the details.

I’ll start with the positives. As you would expect from Fanatec, the packaging and out- of- box experience was top-notch, with the now customary pack of stickers and race-themed messages printed on the box, (in this instance it read, “Being second... is to be the first... of the ones to lose.”. The instructions and tools are all there, and presented as neatly as you would expect.

Installing the CSL Universal Hub was a doddle; the popular screw patterns mean this hub will mount to most popular wheel brands like Momo and Sparco, While the tools included aren’t of the highest quality, they really don’t need to be. For this purpose, they do the job perfectly.

The buttons, rocker switch, and Funky switch all felt really good, even if they are clearly a more affordable execution. The Funky switch for an example is a plastic moulded knob as opposed to the anodised Aluminium version you will find on something like the Formula V2. We’ll get to the 2-way toggle switches later, but suffice it to say that overall the quality of the buttons is good, if not quite up there with Fanatec’s best.

Another aspect I especially like is the new Fanatec simplified quick release system. I have explained in previous reviews about how much better this is Vs the old CSL screw based system. It. works really well and means you can get racing even quicker. It's also worth mentioning that this can be replaced with a Fanatec aluminium Club Sport quick release adapter.

I was also happy to see the small three digit display on the Hub, a feature I initially feared might have been cut to keep costs down. While the display isn’t the highest quality (a common theme with the Hub’s components), it’s good enough for its purpose here: relaying in-game information and helping with navigating the wheelbase menu.

While we’re on the subject of quality, I’d be remiss if I didn’t mention that I felt a bit underwhelmed the first time I got the product into my hands. I’m used to a high-quality build and finish with Fanatec products, from my CSL Elite wheel base and WRC wheel to the DD2 and Formula V2 wheel. While I have small issues with all of these products, I’ve never been able to say that Fanatec kit lacks quality. Unfortunately, the CSL Universal Hub is missing that reassuring build that I’ve become accustomed to.

This is largely attributable to the all-plastic construction, including the paddle shifters. But it’s at this point that I have to remind myself who this product is aimed at: It’s not for the Podium users, and it’s not really for the ClubSport audience either. This hub is aimed at people like me, who just want a cheap solution to adapt wheel rims. If I wanted magnetic shifters and metal construction, well... there are premium products available already—products I haven’t bought because of the previously mentioned high costs involved.

Once the CSL Universal Hub was attached to the rim, it was time to set up the shifter width distance. I did this after attaching the Hub to the rim, as I felt it gave me a better sense of where I needed the shifters to be., In the end, I was able to get the perfect positioning doing it this way. To adjust the width it’s a simple case of loosening the screws on the back of the Hub and sliding the shifters and button islands into position.

After getting the product installed on the ClubSport Wheel Rim R330 I used for testing, I updated the drivers and made sure it was working properly. Thankfully, this was easy to do, even for a computer noob like me. And just like that, within a matter of minutes I was up and racing with my new wheel rim. The fact that the Hub just works, with minimal fiddling, is another positive example of the Fanatec eco system working well.

But it wasn’t all plain sailing from this point. This next paragraph is not a dig at Fanatec, it’s more of a warning to any potential buyers of this product, and a demonstration of how much of an idiot I am.

The CSL Universal Hub features two 2-way toggle switches, some (like Chris Haye) might say they’re an improvement over the original Fanatec 2-way toggle switches., Personally, I found them a little stiff out of the box, but over time they became smoother to operate. But I digress. Here’s where I went astray: This may be patently obvious to everyone but me, but pressing down on these switches so that they recess into their housing can render them useless. I did this just fiddling around with the hub, not thinking it could cause a problem, and managed to break off the back of my test unit. Fanatec were kind enough to replace my unit, and the replacement has had no such issues. Again, I'm the idiot—I made the mistake so you don’t have to.

As I previously stated, I managed to get the shifter positions pretty much perfect, but in doing so I compromised the position of the button islands somewhat. No problem, I thought, it just needs some tweaking.

After quite a load of tinkering, I concluded that I wouldn’t be able to get the placement of both the buttons and the shifters to my liking. This might be down to the size of my hands or the size of the rim I was using, 330mm, a touch on the large side, and your mileage may vary.

One last point on the adjustable shifters: The shift action is actually quite nice, especially for the price and considering the plastic construction, but I would have liked to see metal paddles like the ones found on the CSL Elite and WRC wheels.

Based on my testing, I’d say that the CSL Universal Hub is probably best suited to use with wheel rims smaller than 310mm and larger than 280mm. That’s a range that should encompass a wide variety of third-party wheels on the market, but it does exclude a few outliers.

In principle, the CSL Universal Hub is a great idea and a neat solution for adapting wheel rims to Fanatec wheelbases. In practice, though, I can’t help but feel that the execution of the product just misses the mark. Perhaps a V2 of this device will fix some of the issues I have with it, but for now it will be remembered as one of Fanatec’s more peculiar products, for me at least.

So all said and done, would I buy this product? Despite that rather ambivalent assessment, yes, I actually would. Even knowing what I know about it, I would still likely pick one up if there was a bargain wheel on ebay that I just couldn’t resist, simply because it’s the only way to adapt a wheel affordably, and its flaws are ones I can live with. However, for someone investing in a high-end wheel like Fanatec’s Porsche rim, I don’t think this would cut the mustard.

Fanatec provided the products for us to test. We were not paid to write this review. We were not asked to say anything in particular about the product. All the thoughts in this article are my own.
Reactions: mister dog
About author