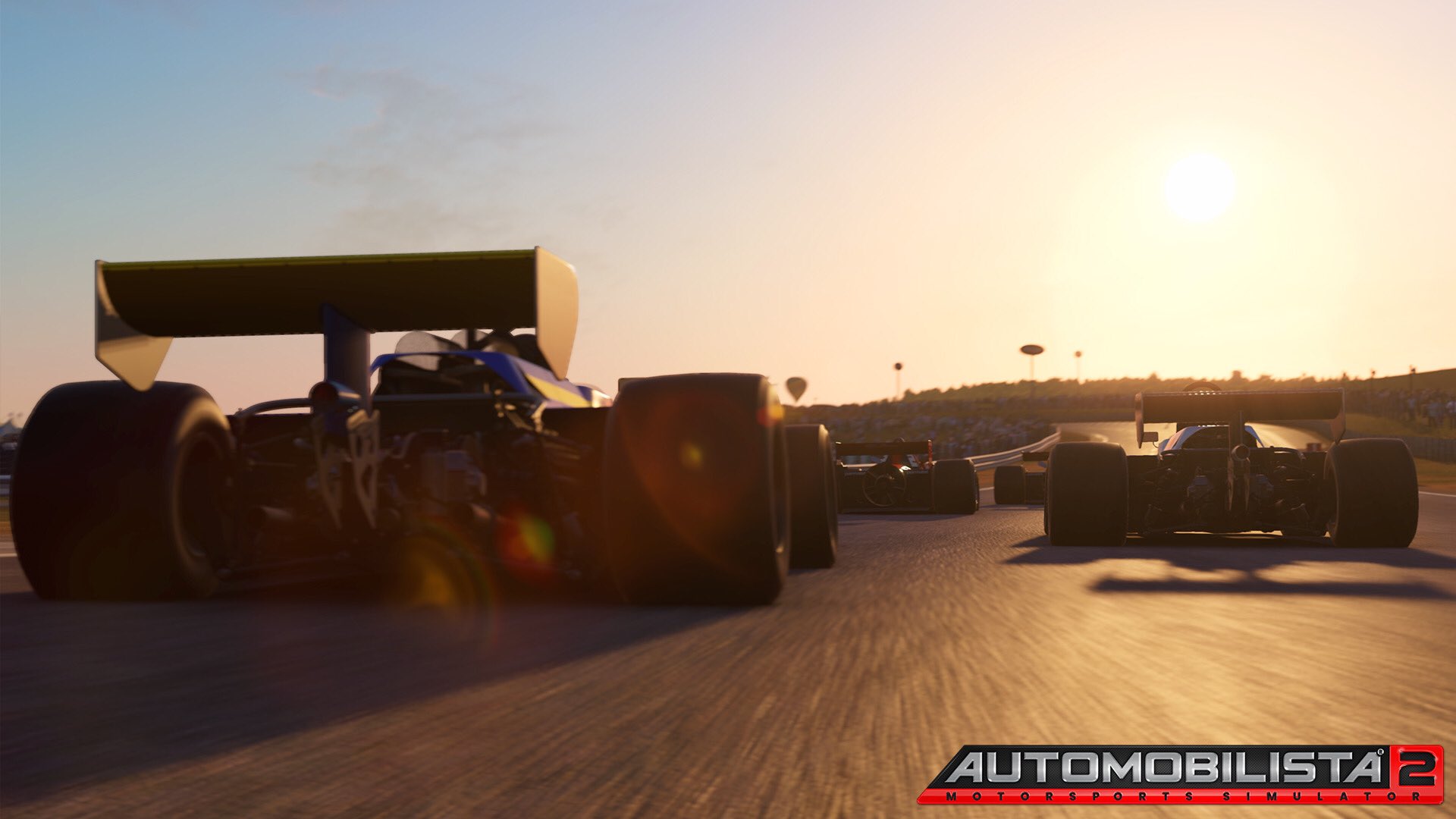 Reiza Studios published a seemingly innocuous tweet ahead of the weekend showing their F1 car content... but the eagle-eyed might have noticed something rather interesting in the shot...

... the Niki Lauda driven and short-lived but still incredibly awesome Brabham BT46B 'fan car' from the 1978 season - well OK, the 1978 Swedish Grand Prix to be precise, before the FIA swifty deemed the controversial design illegal and outlawed further participation of the revolutionary machine.

Despite having a shelf life of just the single Grand Prix, Lauda used the car to devastating effect to produce a crushing domination of the Swedish Grand Prix at Anderstorp, taking the chequered flag over half a minute ahead of the Arrows-Ford of Italian Riccardo Patrese.

Apparently, if the tweet linked below is anything to go by, sim racing fans will soon have the opportunity to sample this iconic car in Automobilista 2... and the governing body of the sport can't do anything to ban it!

I hope they used Naturally Aspirated horses back then..."bring back the ****ing H12's"

Sporadik said:
Would be great if there was an option to kick up stones behind you and annoy other drivers. Would be cool and immersive in VR following the fan car and having stones pinging you
Click to expand...

Perhaps one could put together a setup sort of like a motion rig but instead of actuators, there's a paintball gun aimed at your face and you have to dodge the rocks in the sim...

Sporadik said:
Would be great if there was an option to kick up stones behind you and annoy other drivers. Would be cool and immersive in VR following the fan car and having stones pinging you
Click to expand...

Dodging rubber marbles with my head is already giving me PTSD don't add rocks to it.

G-Slev said:
The flux of the fan was so low that it wouldn't pick up stones. Besides which, it would throw stones longitudinally.

Basically, Mario and Chunky Chapman made mischief about it because they saw their championship disappearing before their eyes.
Click to expand...

I get that part. The stones flying was a made up excuse. The thing is, in AMS2 the stones from the cars ahead are indeed flying in your direction, given the right circumstances. I saw for the first time in one of GamerMuscle's videos and the next time was in my very own screen, but that doesn't happen too often.

daveytabisz said:
I get that part. The stones flying was a made up excuse. The thing is, in AMS2 the stones from the cars ahead are indeed flying in your direction, given the right circumstances. I saw for the first time in one of GamerMuscle's videos and the next time was in my very own screen, but that doesn't happen too often.
Click to expand...

Chunks of rubber are pretty common in AMS2, really cool, even the sound of the ping as it hits the metal of your car.
Still waiting for them to fix the broken steering..
Great, cannot wait to take it racing on Sebring and Leman's! Oh.. wait..
At last, the fan car! Presenting unique and amazing is the way to go for any sim. Good job Reiza
So choosing this banned car will make you win every race?
Or they have Bopped it?

Chris Temperino said:
Wondering what track that is I'm thinking it's kaylami but I'm not sure?
Click to expand...

First I thought its Watkins Glen .After the Pits Exit its goes a bit uphill and then the left full throttle corner were i kiss the armco so often . They think its Sweden were 1979 GP was taken plased
Last edited: Apr 13, 2021

davehenrie said:
If I were going to MOD the 2J for rF2, I would use the diffuser to position extra downforce, even tho the car did not have one. (simply because the sim, at present, has no code for a fan car.) Also the diffuser only works with speed with rake & drag, none of which were a concern with the 2J which could sink on it's springs about an inch while parked. So it would be a hack that would work at speed, but not precisely as slow corners benefited as much as high speed turns.
Click to expand...

Thanks for the explanation, very helpful!
While I understand it wouldn't really simulate the real thing, I like to see that there are workarounds for ground effect/fan cars. Hope some day devs really try to add that to their sims, but I guess it is way easier said than done
I can't help but think this is pretty cool!

They better have plenty of liveries for it though because if it is true to form it will be pointless racing against anything but other fan cars.
More vintage tracks please and more vintage cars I,m on board! Wait for the historic nordschleife the real green bumpy hell. And I hope for a porsche 917
Please bring the Anderstorp track as well to AMS2!!
Nice update!

It's working very obvious since the downforce/fan-speed correlates with the engine-revs like in the real car. Huge understeer if the revs are low through a corner and grip gain when downshifting. Really fun to drive and prefer it in this class
Last edited: Apr 13, 2021

dave kirk said:
Yeah, the car was in a different league, they qualified on full fuel tanks so to not embarrass everyone else lol
Click to expand...

and with hard tires as well, not even current mercs sandbag this hard lmao

AyrtJ97 said:
My main concern with fan and ground effect cars is how accurately the game simulates its aero cappabilities, but anyways, really looking forward to try it out
Click to expand...

The fan will actually work related to engine speed in AMS2 (let's be honest, it would be a shame, if it doesn't ), so you will have to keep up your RPM (quite high), to generate these (crazy) amounts of downforce.

Ground effect is also a thing that is working in AMS2. Also was with the BT44 already, btw. that does not generate much of it, but actually already a bit that justifies its effect on driving and setups.


Richard Hessels said:
So choosing this banned car will make you win every race?
Or they have Bopped it?
Click to expand...

The BT46 is indeed very fast and probably outpaces the groundeffect Retros, when driven by a skilled driver on very fast tracks, but this comes at a price...the driving itself.

Especially on tracks with slower sections it will be important to have it at a reasonable high level of RPM and pro-active driving approach. When done right, the car feels, as if it has infinite amounts of grip, if done wrong it will be quite odd ...well...this car is odd to begin with, for obvious reasons.

The car wasn't banned, btw., it was withdrawn by the team, to avoid the political shenanigans, that could follow due to it.
Last edited: Apr 14, 2021

Louis Wedding said:
Still waiting for them to fix the broken steering..
Click to expand...

Could you share more detail about what is wrong with steering?

Sorry for double posting, i have no idea, how to add quotes to edits with this new page.

CrimsonEminence said:
Could you share more detail about what is wrong with steering?

Sorry for double posting, i have no idea, how to add quotes to edits with this new page.
Click to expand...

Outside of the Formula Vee, all cars need more than 90 degrees of steering lock for the cars to actually start turning for me, then you need to apply less as it ends up turning too much. Have tried default settings, tried altering sensitivity and steering lock settings on my wheel (Fanatec CS 2.5) and in game. No other game does this, i've deleted files from previous versions and all that jazz and still no go.