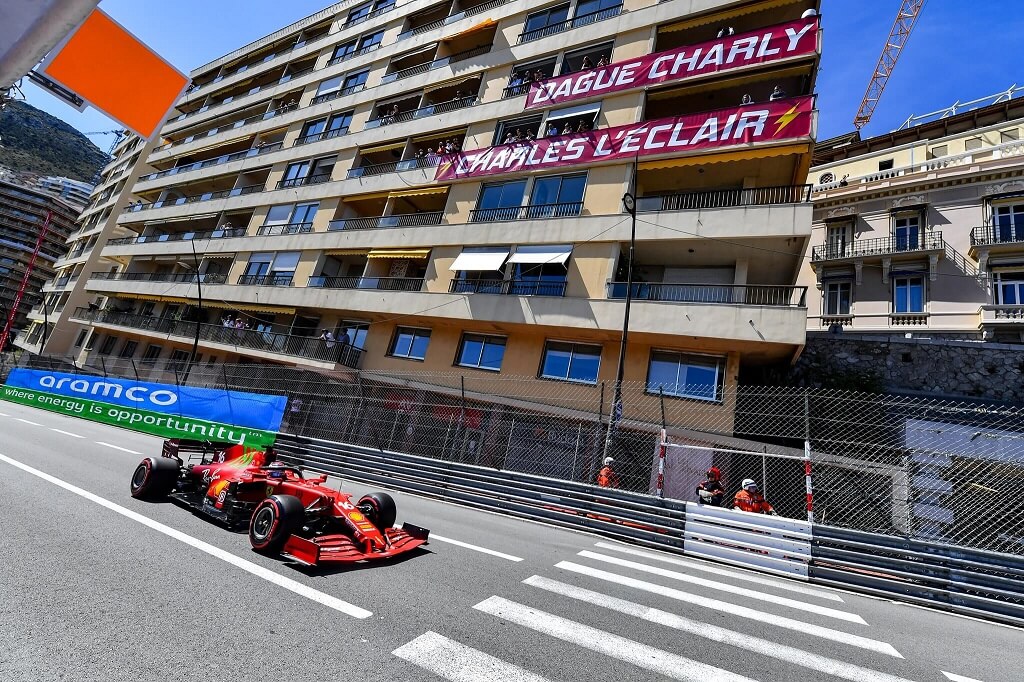 After two years, the Monaco Grand Prix is back! Let's get talking about F1's first race at a street circuit since Singapore in 2019.

It has felt like an age since the drivers have been tested around a street circuit, and while it has not always produced the most exciting races, there is plenty to look forward to about this weekend's visit to the Côte d'Azur.

In unique Monaco fashion, practice got underway today rather than on a Friday, a tradition that has been maintained since the original Grand Prix was held on a bank holiday weekend. With the new shorter practice format and narrow track aplenty, there was lots to keep the drivers on their toes as this year's rookies familiarised themselves with the walls. We certainly won't be debating track limit rules this weekend!

Cool and dry weather is expected throughout the event, which seems to have favoured the Mercedes car in recent history. That being said, Monaco tends to see the order mixed up a little due to the unusual nature of the tight and twisty circuit. A few parts of the track have been resurfaced this year, with some of the drivers noting the higher grip levels. While Sergio Perez topped the morning session, Charles Leclerc led a very strong Ferrari one-two in the afternoon, with championship leader Hamilton almost half a second off the pace.

With the Briton being the last to take pole at Monaco, and Mercedes showing impressive low-speed performance this year, he probably remains the favourite, with Max Verstappen a strong contender as ever. However, Ferrari's impressive pace caught the grid's attention, and while it was some time ago, they did take a comfortable win at F1's last street circuit event.

Let's get talking about what we're looking forward to this weekend, and cast your vote to let us know if you think Ferrari will be on the podium. Their speed today has certainly given us something else to look forward to come Saturday and qualifying.

The drama kicked off before the lights even went out at the Monaco Grand Prix, as pole sitter, Charles Leclerc limped back to the pits on an installation lap. Unable to resolve the issue in time for the race start, the Monegasque driver was unable to make the start line, to begin his home race from pole. Nonetheless, in a classy move he made his way to the grid to stand for his national anthem with the rest of his peers.

Max Verstappen defended his lead into turn one from Valtteri Bottas, despite starting from the dirty side of the track and on the outside into Sainte Devote. Typical of races at Monaco, there was little action to follow until the pit window. When we got there however, there was plenty of drama as a reward.

Valtteri Bottas was forced to retire in an incredibly unusual way, when the front-right wheel gun machined the nut onto his front axle, leaving the team unable to change the remaining tyre. This created an opportunity for Lando Norris to move up into the podium places, after a strong weekend.

Other drivers who made strong gains in the race were Sergio Perez and Sebastian Vettel, who managed to jump Gasly and Hamilton in the pit window with an overcut. Gasly was unable to match Perez and Vettel for pace after his first pitstop, with Hamilton stuck behind the Frenchman, after being unable to jump him on his two lap undercut strategy.

There was little further action beyond some black and white flags for Norris and Tsunoda due to some track limit violations, which saw Max Verstappen cross the line to take his first ever win at Monaco. He was followed by Carlos Sainz, who took his first podium with Ferrari, and Lando Norris after yet another very impressive weekend.

With Verstappen's first win at Monaco, also came the championship lead, after Lewis Hamilton struggled to get his tyres working like his teammate in qualifying, and was then unable to claw back the deficit in the race. He did however manage to steal a bonus point for taking fastest lap away from Yuki Tsunoda, with a late pitstop.

Having taken the championship lead for the first time in his career, Verstappen is now the only driver on the grid to have finished in the top two at every race so far in 2021. Such consistency is usually key to putting together a strong championship challenge. No doubt though that his seven-time world champion rival, Lewis Hamilton will be looking to bounce back in Baku.

After Valtteri Bottas' pitstop misfortune, and a tough weekend for their world champion, the Monaco Grand Prix saw Mercedes lose top spot in the constructors standings to Red Bull. However, with 18 races to go it is still very early days, and nobody doubts the speed nor resilience of the team at Brackley.

We hope you enjoyed the Monaco Grand Prix, as F1 looks ahead to its next chapter in Azerbaijan, in two weeks' time.
Reactions: aylexm, Stefan Woudenberg, Bram Hengeveld and 9 others
About author

Double podium to get the top 3 teams excitement back in the Championship. hope or reality? And then it's quali time and Mercedes takes the lead again Top team that's for sure but seeing Ferrari and/or McLaren back at the top is very welcome.

We'll see this weekend!
Last edited: May 20, 2021
Would be soo cool to see Ferrari make the pole and victory! Fingers crossed for Leclerc or Sainz!

BrainsBush said:
Double podium to get the top 3 teams excitement back in the Championship. hope or reality? And then it's quali time and Mercedes takes the lead again Top team that's for sure but seeing Ferrari and/or McLaren back at the top is very welcome.

Definitely think Ferrari are in the mix this weekend. Sainz's pace on scrubbed hard compound raised a few eyebrows. Very excited for Saturday, particularly with how strong Leclerc can be in qualifying when he puts the lap together.
I don't think it will happen but it would be amazing for @Charles16 to win at his hometrack. It would be good for the sport as well if we see wins for Ferrari and McLaren this season.
My F1 2020 race as verstappen had me starting 2nd behind sainz with leclrec starting fifth. This was a Grand Prix race with no qualifying 105 AI no assists at DUSK. On the Podium: Max V. Carlos Sainz....CHARLES. This was before p2 this afternoon so there was no funny business. I hope these results are an indication of what’s to come Saturday and Sunday 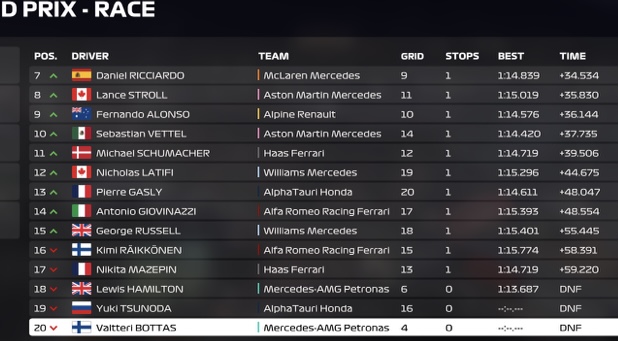 Last edited: May 20, 2021
I love how it is being treated as if Ferrari put their cars on Pole during quali rather than FP2. Don't forget, even Spyker back in the days managed to win FP sessions of Fridays (Thursday in this case).

Im not the speculative kind of F1 fan, so we will see on Saturday what their actual pace is. I simply don't expect RBR and Merc to sit still during their day off. And Merc has been sandbagging before.
Ferrari are still in mediocre shape as a team and don't deserve to win this.
Great to see this race back, always has to be part of F1 or that's the end.
Leclerc felt they were quite fast in sector 3 at barcelona and generally in slower corners this year. My gut feeling is max will battle for a podium here and hamilton will find a way to drag a win out of the mercedes. Leclerc, Ocon or norris to pull something out of the bag i hope. Anyone can end up in a barrier too!
I think the ferrari is illegal

Last edited: May 21, 2021
that's a joke don't worry....!! for Sainz and Lecrerc it would be nice. Perhaps the most talented driver duo in 2021, Redbull, I think it was a bit disappointing, had expected more of it, still a long way to a title. Merc I still give the best chance and the best package on the different tracks so far.. But we only know on Saturday
Last edited: May 21, 2021

paracletus said:
Ferrari are still in mediocre shape as a team and don't deserve to win this.
Great to see this race back, always has to be part of F1 or that's the end.
Click to expand...

You reckon? They were the most improved team over the winter, and are finally backing two young and especially talented drivers - not sure if that's happened in my lifetime. I think they have the strongest driver lineup and they seem to have made a step ahead of McLaren since Bahrain too.
Of teams that haven't won a race this year I think they deserve it most.

With you on the second point. While one race isn't bigger than the sport, it'd be a travesty to permanently lose somewhere with history like Monaco or Monza
Last edited: May 21, 2021
Mclaren's livery is awesome!
both ferraris should be in front of perez. call it now
I just wayched FP1 and FP2--thank you for the preview which has me excited for quali and the race.

I enjoyed the poll question (and the answers!) Leclerc could certainly manage to get on the lowest step of the podium.

Mega props to whoever picked the photo of the resplendent McLaren Gulf!
This is just free practice calm down boys

We will see what happen on Hamilton day !

TrooperAsh said:
My F1 2020 race as verstappen had me starting 2nd behind sainz with leclrec starting fifth. This was a Grand Prix race with no qualifying 105 AI no assists at DUSK. On the Podium: Max V. Carlos Sainz....CHARLES. This was before p2 this afternoon so there was no funny business. I hope these results are an indication of what’s to come Saturday and Sunday View attachment 476093 View attachment 476094
Click to expand...

You renamed Grosjean and Mick How ?

IceColdBeard_24 said:
This is just free practice calm down boys

We will see what happen on Hamilton day !
Click to expand...

Hamilton days. But surely he'll need to do it on Saturday as Monaco Sundays are mostly useless.
If Ferrari do get ahead in quali then they’ll no doubt bodge strategy somehow and Merc will get their standard victory. Can’t let us Ferrari fans have too much happiness now can they.
probably the only race of the season i have something else on my other monitor to watch while this race happens, very boring track, it's only on the calendar for the rich

Alex Harkett said:
If Ferrari do get ahead in quali then they’ll no doubt bodge strategy somehow and Merc will get their standard victory. Can’t let us Ferrari fans have too much happiness now can they.
Click to expand...

To be honest most times Ferrari does that to themselves.