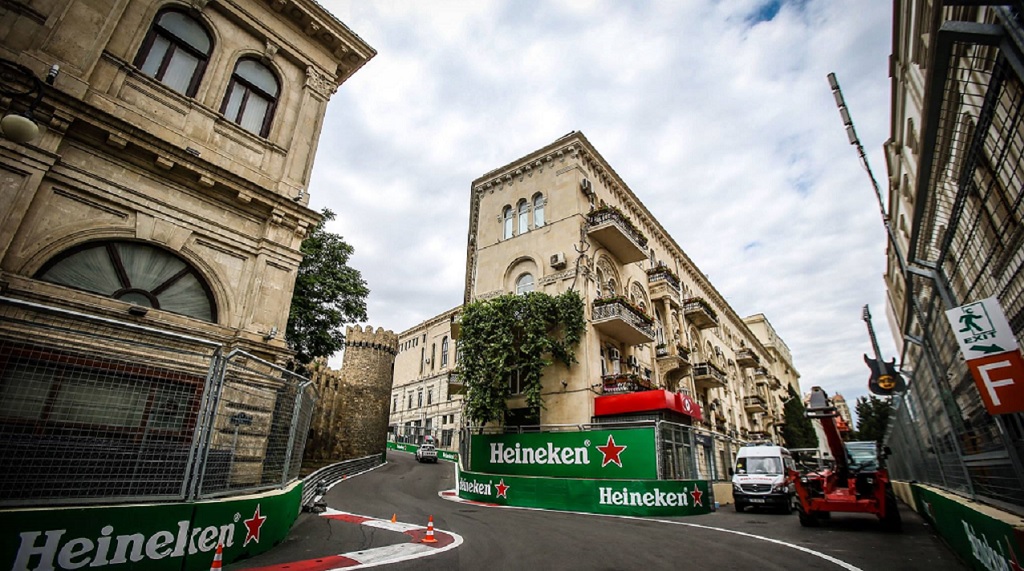 Formula One is back in Baku for its fifth visit to the Azeri capital city.

The sport did not get the chance to race around the streets of Baku as expected last season. However, we are back by the Caspian sea as the race for the 2021 title begins to intensify.

The track is unusual in its nature, being a high speed street circuit. A fast lap around Baku requires a great deal of confidence through sectors one and two, which feature plenty of walls and heavy braking zones with limited runoff areas. The notorious castle section, an uphill stretch around the Old City features a track width of just over seven metres, and is set to become even faster this year. The inside kerb on entry to the castle section has been removed, so we should see the cars pass through the trickiest part of the lap quicker than ever before.

What makes the circuit particularly challenging, is that the last two kilometres of the lap are taken flat out. This of course forces teams to run less downforce than they otherwise would, making the cars even more of a handful through the twisty second sector. Conditions should remain dry, although the temperature is expected to be a fair bit hotter than on F1's last visit to the circuit.

Max Verstappen and Lewis Hamilton will head into this weekend as favourites, having won all five races this season between them. Sergio Perez has always gone well at Baku however, having taken podiums here for Force India in 2016 and 2018. McLaren could pose an outside threat too, having shown the strongest straight line speed of all the teams this year. Norris will no doubt hope to continue his good form from Monaco, and make the most of the two kilometre sprint to turn one come race day.

This weekend sees additional pressure applied to world champion, Lewis Hamilton, with rival Max Verstappen leading the drivers standings for the first time in his career. The Briton rued lost points in Monaco, describing Sunday as a "really, really poor performance from the team." He will no doubt bounce back this weekend, as he has done so often in the past. Do you think it'll be enough to regain the championship lead? Let us know in this weekend's poll, and tell us what you're looking forward to about Baku!
Next page: Free Practice 1 Results >
Reactions: ykchow72, Ruttman98, Kimirai and 2 others
About author

Appie Kuipers said:
Stupid, should he make an emergency stop, fly like a rocket into the pits? He did go for safety
Click to expand...

The point is he asked his team if he has to go to pit or not. If red flag always shortest way to pit. Because of the unclear immediate instruction he was penalized with 3 in stead of 5 grid places.
Personally (but that doesn't count/matter) I would have let him stay at his qualified starting place.
As a Ferrari fan I am just happy that on this kind of tracks the car shows it is actually not bad at all. The big engine blunder last year just killed all of our performance, and we're slowly clawing it back. Plus, Leclerc and Sainz to me are the best pair on the grid. With 20 hp more the car would be fighting for wins on tracks with slow corners.
Well you can say about Baku what you want but it has often guaranteed some exciting races. Same this year.
Fúck Pirelli.
What a deception to finish this race like this. Max and Lance --> Pirelli need to explain something
Italian **** second hand rubbish Ferrari **** and now this.
Race should be cancelled for driver safety.
Sad for Max.. bad luck same as Imola 2020 f1 tire joke
Last edited: Sunday at 14:47
Pirelli is f**ing joke, tyres blowing up on a straight is unacceptable
They better stick with the pizza’s, back to GOODYEAR
VET will win this.
Restart for 2laps? Who lost his mind? And on could tires.
Last edited: Sunday at 14:59
Standing restart. That could shuffle the field completely. What an outcome of this race. Who expected that about 30 minutes ago...feel sorry for Max and his team
Just another boring F1 race...
Pretty dull to watch, turned off now. Most interesting to see SV being very quick though, that's unusual.
Ohh Lewis... after the free gift a rookie mistake. I think he is burning his breaks, a lot of smoke by the start. Better he take patience next time
Last edited: Sunday at 15:22
Ha ha ha ha ha ha ha Hamilton
How are you TOTO?
Last edited: Sunday at 15:20
Crazy final!
Great outcome!!! Verstappen totally deserved that win, so this is the best outcome after that Pirelli tyre disaster. Bottas bad.
Last edited: Sunday at 15:21
One way or another. Baku finds a way to entertain us.