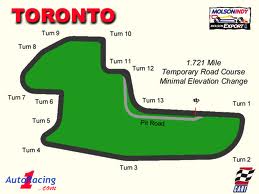 The Honda Indy Toronto is an annual IndyCar Series race, held in Toronto, Ontario, Canada. Originally known as the Molson Indy Toronto, it was a Champ Car World Series race held annually from 1986 to 2007. The track has 11 turns, is a 2.824-kilometre (1.755 mi) street circuit, and is located at Exhibition Place.
The Toronto Indy is one of seven Canadian circuits to have held an Indy/Champ Car race, the others being Canadian Tire Motorsport Park,Mont-Tremblant, Sanair, Montreal, Vancouver, and Edmonton.

Credits:
This is a conversion of iDT Simulations's own rFactor1 track.

Track looks best in NON-HDR mode.
-
Instructions:
Copy the rfcmp file to your packages folder, then install through the RF launcher.

Unlike the rf1 version, there are no night lights yet. Maybe later.

Special thanks to Miss Toronto herself, Brandi Latimer for her support.

Conversion to any other gaming format is prohibited without permission.

COMMERICAL OR PROMOTIONAL USE OF THIS TRACK WITHOUT PERMISSION IN WRITING IS PROHIBITED AND WILL BE DOCUMENTED AND PROSECUTED. Donations can be made via paypal todoug@idtsimulations.com