Hello guys
Today I'd like to introduce my real F1 2019 season mod for F1 2013 game!
NOTE: this mod is INDEPENDENT from @Gaara CewoFan 's 2019 season mod released before.

WHAT THIS MOD FEATURES:
v1.4 CHANGELOG:
- Anthoine Hubert at Renault option (if only we saw this in real life as well...), replacing Hulkenberg.
- Haas F1 Singapore livery (no Rich Energy)
- Updated the helmets of Hamilton (red) and the Alfa Romeo drivers.

v1.3 CHANGELOG:
- Improved database:
+ Adjusted drivers and cars' performance.
+ Reworked fuel distance, thanks to @yesofcourse 's feedback.
- AI Simulation mode, if you use this ur car is always indestructible even if you turn the damage on.
- Modified ctf files, so that the midfield cars are more balanced.
- Reduced the KERS duration (ADD-ON)
- Reworked the Red Bull RB15 skin.
- Added the Whyte Bikes Haas F1 Team skin. (ADD-ON)
- And most importantly, I added the Gasly-Albon swap ADD-ON:
+ Changed the drivers' helmet logos (Albon with RB logos, Gasly with TR logos)
+ Changed the drivers' pictures and suits (Gasly in TR suit, Albon in RB suit)
+ Added a database similar to the one I mentioned above but with Gasly and Albon having swapped their seats.
+ Updated the Red Bull and Toto Rosso car numbers corresponding to this transfer.

*v1.0 CHANGELOG:
- The official 2019 drivers' line-ups, with Leclerc, Verstappen, Gasly, Magnussen, Sainz, Norris, Stroll, Giovinazzi, Kvyat, Albon, Russell and Kubica are the drivers not featured in the stock F1-2013 game.
- The official 2019 F1 teams: Haas replace Caterham, Renault replace Lotus, Racing Point replace Force India, Alfa Romeo replace Sauber, Marussia/Manor not featured.
- The official F1 2019 calendar (21 tracks): Australia / Bahrain / China / Azerbaijan (based on Singapore) / Spain / Monaco / Canada / France (based on India) / Austria (replaces Korea) / Great Britain / Germany (race on Hockenheim instead of Nurburgring) / Hungary / Belgium / Italy / Singapore / Russia (replace India) / Japan / Mexico (based on Korea) / United States of America / Brazil / Abu Dhabi
- Updated the drivers' images and teams' logos to the 2019 season.
- Updated the minicar images (visible when you play Season Challenge, Career Mode or a multi-race custom season in Grand Prix Mode), as shown in the pics below
- Updated the drivers' 2019 suits and helmets. (not 100% correct)
- Updated the career mode to the 2019 season calendar.
- Updated the language file.
- Updated the performance of the F1 engines using data of every race of the season so far, so cars will be comparatively as fast as the real 2019 ones.
- Updated starting grid order according to the season progress so far.
- Artificial Intelligence will be a little bit more realistic and may use oversteer.
- Updated the teams' liveries of the 2019 season.
- New intro made by @MATHEUS DE ARAUJO ALVES .
- New F1 logos when you start the game, made by @Thang Nguyen .
- New starting logo, made by @Thang Nguyen .
- Adjusted tyre wear, now in some certain tracks you won't have to stop many times.
- More realistic damage, you now have to be very careful when driving otherwise you'll end up like Nico Hulkenberg in Baku 2017/18 or Stroll and Hartley in Canada 2018!
- New audio pack: Cars' engine sound updated to be very close to reality.
- The teams' performances are adjusted so that there are only 3 tiers:
Tier 1: Mercedes, Ferrari, Red Bull
Tier 2: Renault, Haas, McLaren, Racing Point, Alfa Romeo, Toro Rosso
Tier 3: Williams
(I ensure that Mercedes will not win every race, the battle among the midfield teams is nuts and Kubica will not finish dead last every race!)
- Updated the cameras when you're driving
and so on...

KNOWN ISSUES:
- This mod will CORRUPT your saved game file so you'll have to start over with Young Drivers' Test once you've installed it.
- There are NO HALOs. In fact, we can only mod the liveries, can't mod the shapes of the cars in every Codemasters' F1 game. However, should I have time I'll find a possible way to add the Halo hud to the cameras.
- The suits are NOT 100% CORRECT compared to real life. Should you be able to edit this I'd be very grateful!
- Only English language is supported. You may help me develop this mod further by making the mod compatible in other languages!
- You must install the Track Pack in order to make this mod work properly. Otherwise, the game will crash in Baku and Mexico!
Link to download the Track Pack: https://www.racedepartment.com/down...2019-season-mod-for-f1-2013-track-pack.26967/
- Pitcrew, racecrew suits and garages are still from 2013. If possible I'll add them in the next updates.
- You can't play Season Challenge Mode in Hard difficulty as there's no team in tier 4, if you do so the game will crash.
- In Career mode, as F1 2013 has only 19 races, the season will end in Brazil (no Mexico, no Abu Dhabi). I have literally no idea how to fix this. If you know that, please comment in the Support tab! Thanks!

Anyway, if you have some more issues with this mod you're ready to comment by either rating my mod or writing on the Support tab.

I tested this mod in the Season Challenge Mode in Medium difficulty and here are the final results: 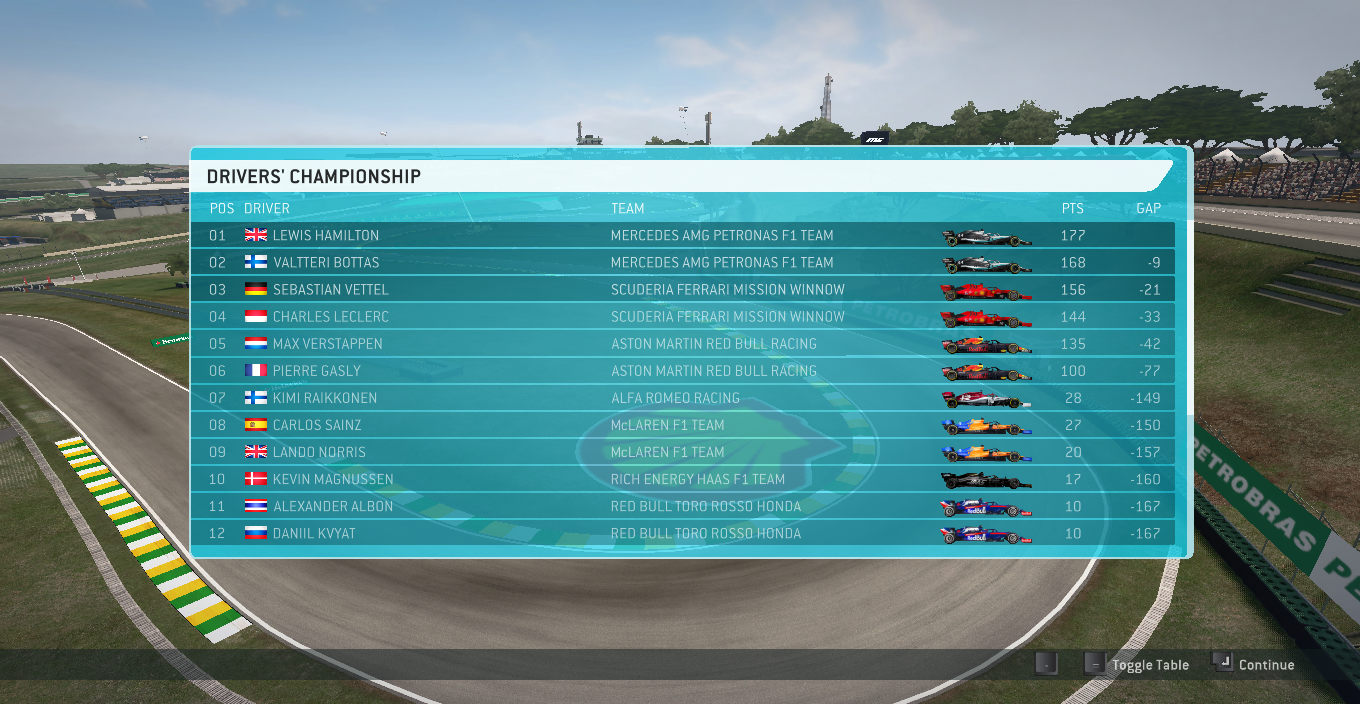 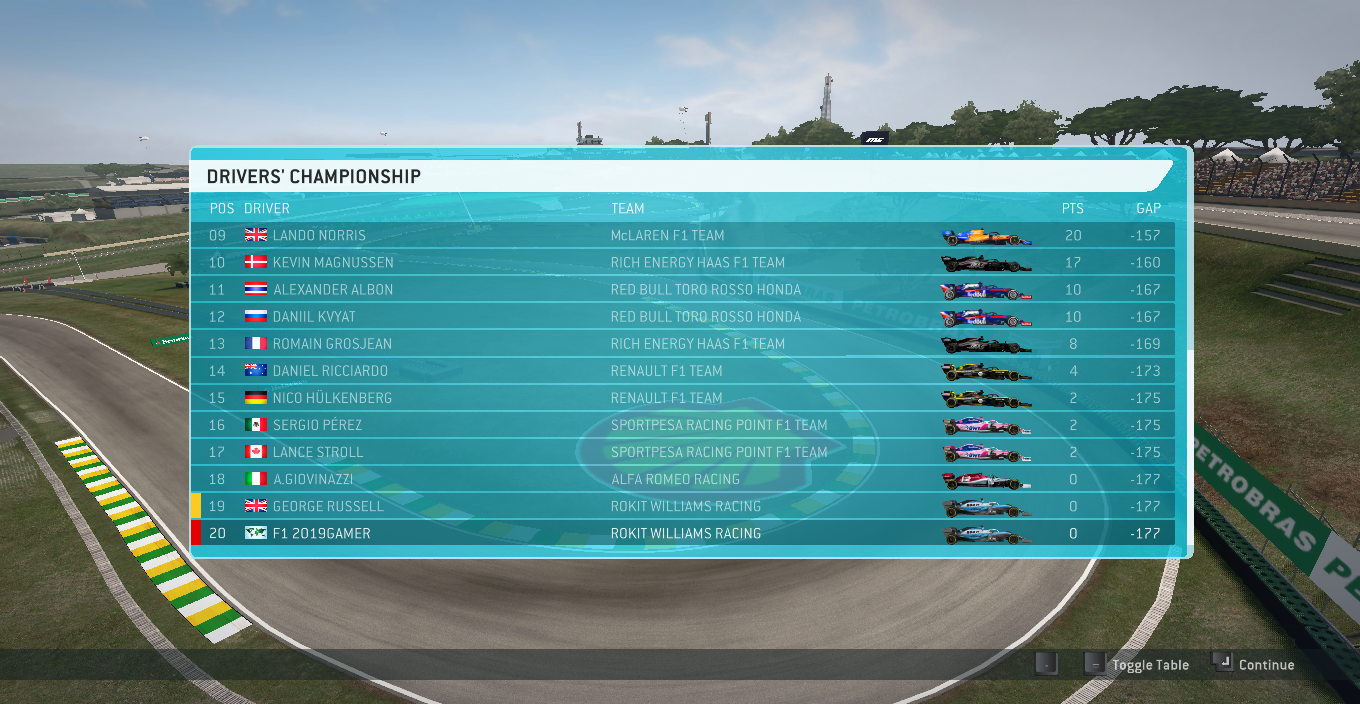 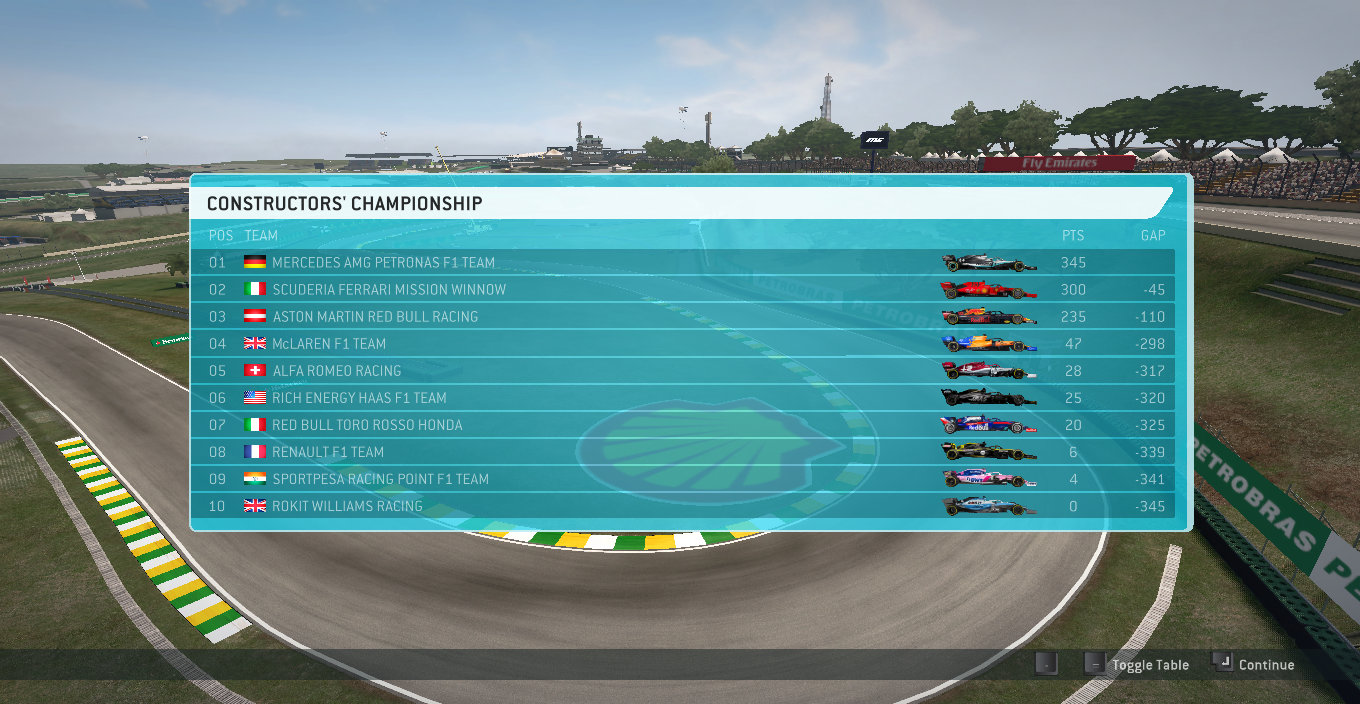 In v1.1 update here is the final driver standings: (in Career Mode) 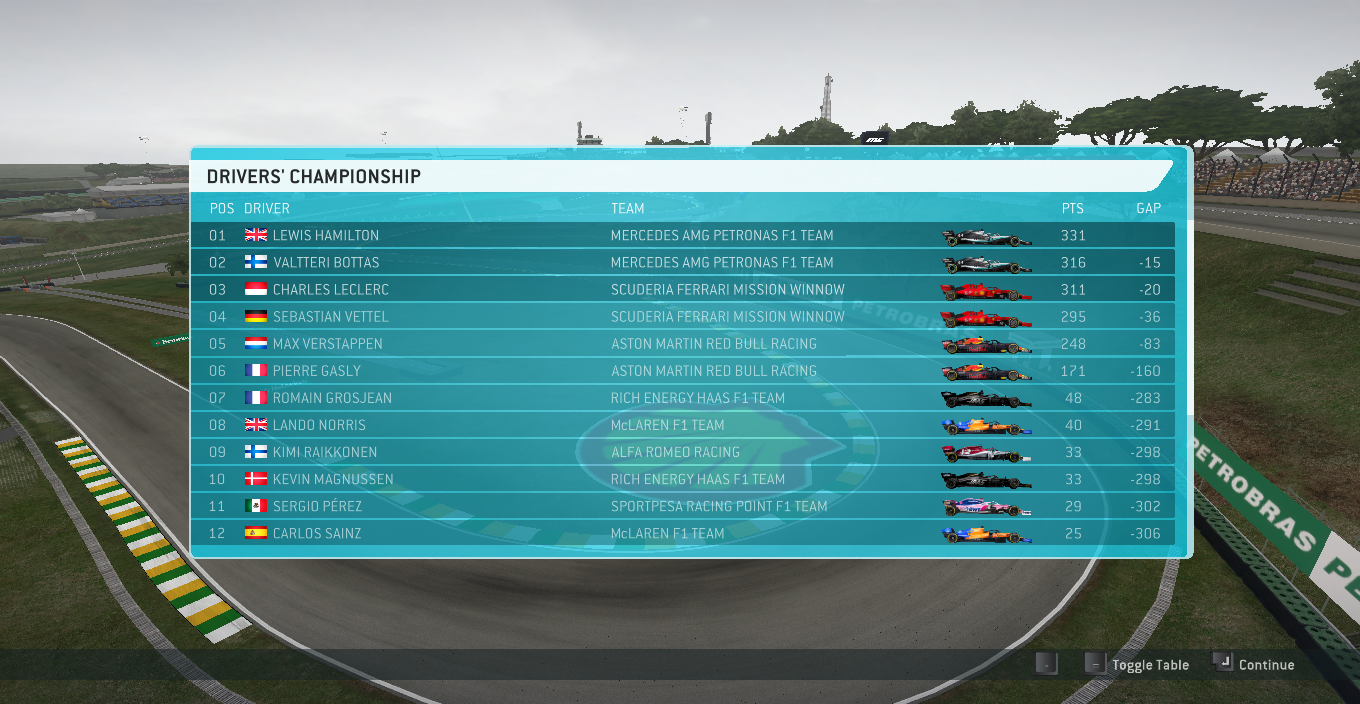 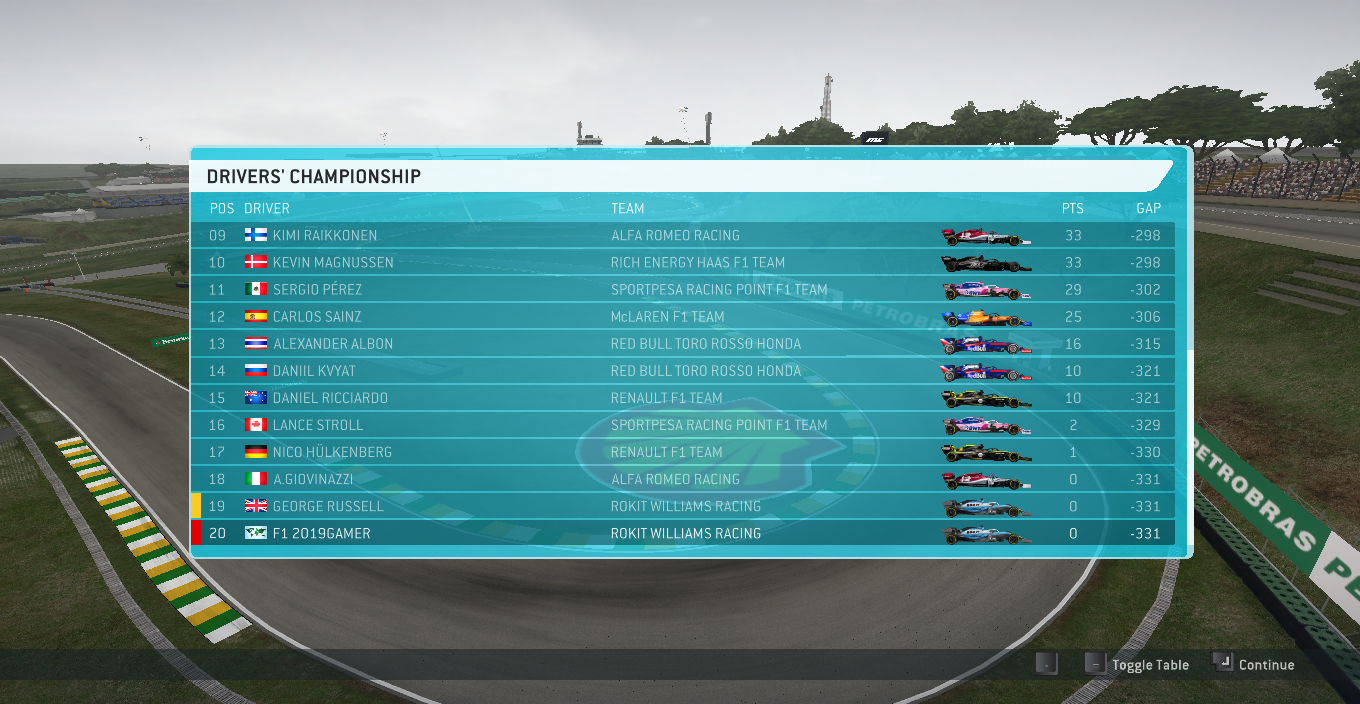 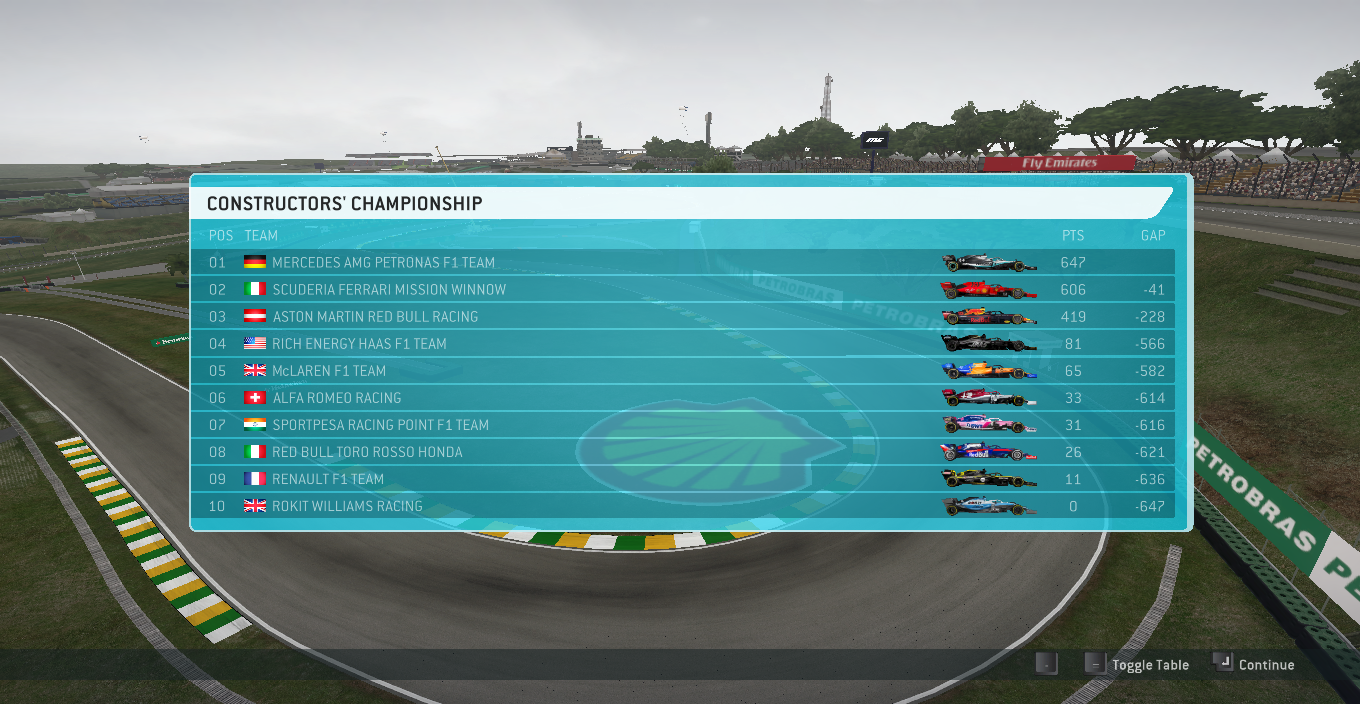 - @talisman ,@Neasty, @Gaara CewoFan and @Bink de Jong for the drivers' helmets
- @silidus and @MATHEUS DE ARAUJO ALVES for the drivers' suits base
- @MATHEUS DE ARAUJO ALVES for the new intro video
- @Klodian Stafa for the new audio pack
- @talisman and @Daniel Paez for the car skins
- @SkyFall for the Hockenheim track base and cameras
- @Cromiell for the realistic damage mod
- @Advantian and @PaoloManzi for the 'more realistic AI mods'
and so on... Once again special thanks to all of you to make this mod possible.
v1.0:
- Vettel's Niki Lauda Tribute helmet (about the author I credited him before)
- Reduced the difficulty if you find the AI's too fast

very very exciting mod!!
but i really want to use same strategy with my teammates
can't i?
sorry for my poor engrish
deer THANG
fantastic job!!
Upvote 0 Downvote
hiii... thank you very much mods for f1 2013... have a question? I always q1,q2.q3 1st in ranking rounds. I want to make changes with ego editor. but where is it qualifying. i couldnt find it.how do i change. I'll be glad, if you help me
Upvote 0 Downvote
Wow It's fantastic!! Congratulations! I began a carreir and I m at the second race and the mod is worked perfectly. Well done! I have a question. If I change Albon/Gasly then can I countine the carrier? Or I sholud restart?

Thang Nguyen
it's fine mate... as long as ur not driving as either of them
Upvote 0 Downvote
Great!!!!
But i have the trouble, that names didnt changed ( photos changed)
For example Charles Leclerc - Pastor Maldonado
Can you help?

Thang Nguyen
this mod is only compatible in English, maybe ur using another language.
Upvote 0 Downvote
great mod !!!

do I need to install all previous versions?

or is it possible to directly install the latest version?
ps (sorry my english, trad by google)

Thang Nguyen
Thanks, you needn't do so, just install the latest version since I included part of the previous ones into it.
Upvote 0 Downvote
no archives found . why?

Thang Nguyen
I was too lazy to make the garages and suits
Upvote 0 Downvote
It's a great mod but it has some unreported problems :
1. the kers system acting strange, it doesn't work properly
2. if you accelerate the time the AI goes 5-6 seconds slower
3. in q2 there are 14 drivers, not 16, and in q3 there are 8 and not 10
4. the car burns to much fuel, in a 5 laps race the cars runs out of fuel at the start of the last lap if you race only on mix 2
5. I THINK the AI crashes a bit to often, and there are to many DNFs
Otherwise is a very good mod, great job

Thang Nguyen
1. I'll make an update in the 1.3 version.
2. That's why accelerating times is not recommended.
3. That's due to the machinery of the game. It is programmed so that the slowest 6 drivers will be eliminated in Q1 and Q2, fixing it is 99% impossible
4.I'll make a fix of it.
5. I'll update the AI in the 1.3 version.
Upvote 0 Downvote
Good Job :)

Thang Nguyen
Thank you! :')
Upvote 0 Downvote
Amazing job mate. The mod is great. Only thing is that, I'm not getting the intro like in the video. I get the original f1 2013 game startup video. Even the f1 2019 theme song doesn't come for me. How can i fix that?

Thang Nguyen
The main point is that we can't change the music in F1 2013, the 2019 intro was edited when I was making that video
But I'll take a look at it.
Upvote 0 Downvote
It's amazing job man. Beautiful mod but I can beat all of the cars even with Williams. It's too easy to beat even with legend.. What should I do or can you fix it? I loved this mod but just too easy.
Greetings from Turkey..

Thang Nguyen
If possible you may raise the AI's horsepower or install the more aggressive AI mod or install my F1 2007 mod and replace the "ai" folder...
Upvote 0 Downvote
I love the mod but why i can't change the graphics
i want to change vehicle reflection from low to high bcoz it looks bad but it not changed after i save the setting

Thang Nguyen
Maybe you should look for some of @Neffo76's mods, which makes the graphics more realistic and may improve the car reflections
Upvote 0 Downvote
https://www.racedepartment.com/downloads/charles-leclerc-ferrari-mission-winnow-helmet-dds-only.26092/

Can you use this?

Thang Nguyen
I used it and modified a little bit the color of the gloves. However as your helmet is a base mod I credited you
Regards, Thang Nguyen.
Upvote 0 Downvote
No credits to me?