Login or Register an account to download this content
Overview Updates (9) Reviews (32) History Discussion
Ask a question
Reviews (32) History
Introduction:
This app provides 6 widgets:
Standings:
The "standings" widgets display the best lap times during practice and qualification.
During races, they will display the distance (metric or imperial) or time between you and the others as well as if people are in pit and their pit stop count during the race.
In addition, if the driver is close to you, the delta is colored as follow:
You can highlight some drivers by editing the file SubStanding_drivers/drivers.ini and adding the names of your teammates or rivals. Your teammates and you will be displayed in cyan, and your rivals in magenta like you can see in the picture below: 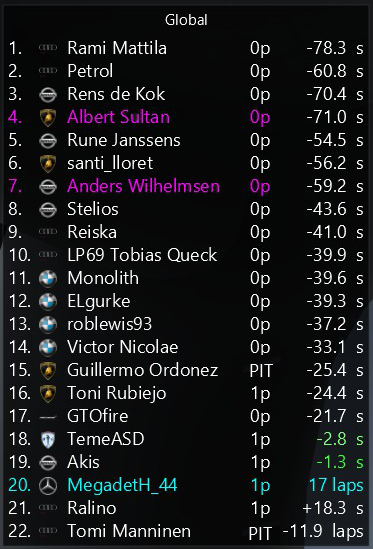 The in-game configuration widget let you change a lot of settings:

And with imperial units: 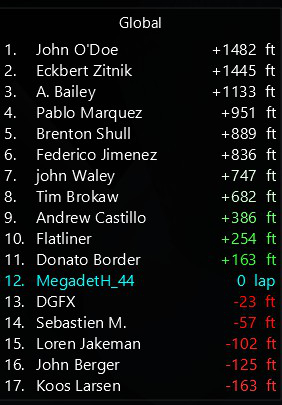 Tha classes can be configured in the SubStanding_classes/classes.ini file, by following this example:

You can add as many classes and cars as you want, as long as you respect the synthax.

Positions:
The "position" widgets are much smaller and give your position like the picture below. It can also be configured with the in-game configuration widget.

v1.00
- New system to prevent the standing shuffle during the first lap of a race
- New column to show if a car is in pit or not and the pit stop count during the race
- Classes updated with the new cars

v0.9
- Bug correction for getting length of multi-layout tracks

v0.8
- Fix for AC 1.3 64bits
- Teammates and rivals are now highlighted in practice and quali too
- Added the new GT3 cars to classes.ini

v0.5
- Bug correction, a wrong folder name was preventing the app to load

v0.2
- Bug correction when a car that is not in any class is used

Thanks
Upvote 2 Downvote
nice app, finally can see a class racing rank, stock game should have this , its a nice configurable improvment. I'm using v1.2 in support comments that was modded. I like to have small car icons , as some of the logos are a bit to small to see and its nice to have option of the mini car icon . the logos are less useful.
Upvote 0 Downvote
Please add the ability of spectating drivers by clicking on their name on the leaderboards, would make the app absolutely perfect for streaming, as I havs to use another external app for changing between drivers if I want to use this app's tower display
Upvote 0 Downvote
i was looking for an app like this for long time. you should change the name to something with "relative" so it will be easier to find
Upvote 0 Downvote
It's possible to put the initials of name, not the name?
Upvote 0 Downvote
One of the more unknown apps, but i love it. So many league mates asking for this app, after they have watched my onboard videos.
Upvote 0 Downvote
Super useful app
Upvote 0 Downvote
simlpy perfect,well done
Upvote 0 Downvote
This is the less fps consuming standings app! Thank you! Can you please add the feature, that it can display the lapped and lapping cars in the global standing?
Upvote 0 Downvote
Is it possible to always show the leading driver in the global standings at the top

MegadetH_44
On the todo list!
Upvote 0 Downvote
Does it show how many laps are riding on tires?