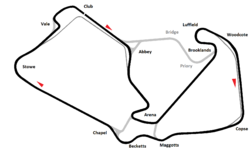 Silverstone Circuit is a British motor racing circuit next to the Northamptonshire villages of Silverstone and Whittlebury.

It is best known as the home of the British Grand Prix, which it first hosted in 1948 and which has been held on the circuit every year since 1987. The circuit is also home to the BRDC International Trophy, formerly one of the premier non-Championship F1 races in the calendar, today awarded to the winner of a race for historic F1 cars at the annual Silverstone Classic meeting. The circuit is owned by the British Racing Drivers' Club.[3]

My first attempt at a track conversion.

Thanks to ISI and all the other modders their tutorials and information in this forum it has been a big help. Still so much more to learn.

There is still room for improvement in most areas like of adding more objects to track environment and better track reflections etc.