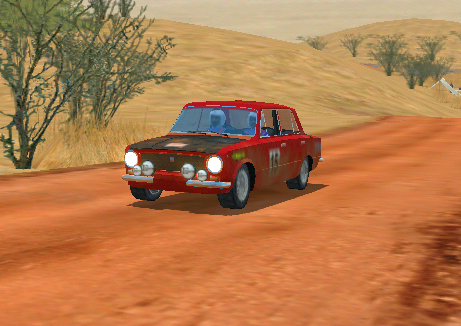 Readme:
This vehicle has been modified using KittX's Lada with his permission. (A big thank you!)
It replaces car_9(Fiat 600).

please ensure that the Torque Multiplier in the game.ini is changed to 1.0
This can be found in settings/game.ini

If this is not done then the car will travel faster than real life.


The first rally for SEAT's official team was the Luis de Baviera Criterium
in 1972 where SEAT lined up a SEAT 124-1600, registration plate B-7169-F.
In OCTOBER 1972 Cańellas driving a 124-1600 TC won for the first time at the
European Championship's RACE Rally. At the "2000 Swerves Rally",
SEAT put its trust on a young driver called Antonio Zanini who won the
rally and was to become SEAT's third pilot on board.

The 1972 Rally Championship ended with Cańellas' title, the beginning of a
long list of titles in the Spanish Rally Championship which ended in 1978.
SEAT won the Brand 's Champion of Spain title from 1973 to 1979. During that
span of time SEAT took part in 104 rallies won 39 and made an overall of 96 podiums.
In regional championships SEAT won 250 times and made over 750 podiums.

SEAT also took part in the European Championship races where Antonio Zanini
was to become second in 1976 and 1979. SEAT won five times in the
European Championship.
But SEAT's greatest result in those days was the Brand Cup in the Montecarlo Rally
in 1977 where Zanini came third and Cańellas fourth.

How to add:
Drag the rtp. file to RTBZFManager and a window will pop up, click Yes and you have the car.
Have fun driving him.