v1.1 is now released - it's a big one, so I highly recommend viewing the changelog here!​
What if Ferrari started an IndyCar team? Just yesterday (14/05) they confirmed that they're investigating the possiblity of entering the IndyCar series. Well, I've imagined what it could look like, as a set of skins for the brilliant RSS Formula Americas 2020 mod. You can buy the car here.

This skin pack features rims and Firestone tyres by @Mahad - you can download other variants of these here. Helmets are also included - basic ones made by myself (or plucked from AC's default options) and also the Sirotkin helmet by @Marco17_ok that features in this pack. Low res versions of the skins are not currently included - I intend to include them in a future update.

How to install? It's easy - just drop the "content" folder into your Assetto Corsa directory.

If you love these skins enough to make some cool content with them - videos, screenshots etc. - I'd love to see them, so give me a shout!
If you would like to buy me a cuppa? You can here: https://paypal.me/MAllington 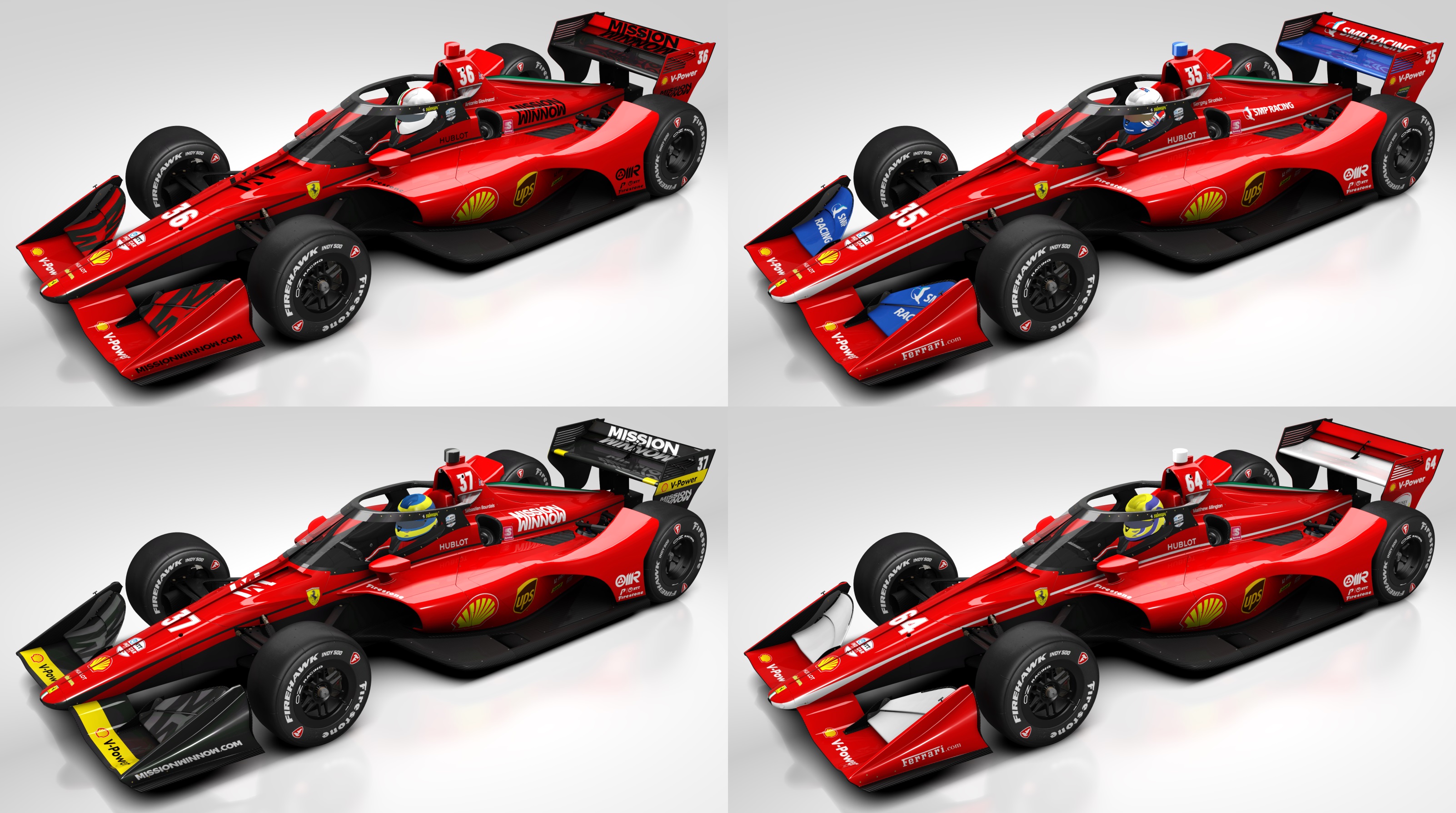 You might notice that, for the most part, the sponsors are generally those common to Ferrari's F1 and GTE programmes, plus IndyCar series sponsors. There are 4 variants of the Ferrari livery included in this pack;

Matthew Allington
Thank you! :) That touch of realism is quite important to me!
Upvote 0 Downvote
Simply stunning work! I'm loving the multiple different liveries after your initial Reddit post. Thanks for giving us some more variety for this fantastic car...

Matthew Allington
Thank you! :)
Upvote 0 Downvote
The realism is quite high. Job well done!
And an aside, are you custom-making the numbers or are you using a pre-existing font as base?

Matthew Allington
The numbers are custom-made, although someone made a stock illustration of that number style from 0-9 which I used as a reference.
Upvote 0 Downvote
Absolutely beautiful

Matthew Allington
Thank you! :)
Upvote 0 Downvote
I love the idea of these and the variations. would be interesting to make the SMP car more like the NART cars of old with a blue and white stripe keep up the good work!

Matthew Allington
I too like the idea of a NART-style liver - watch this space...
Upvote 0 Downvote
Excellent job! and I'm all for the suggestion by DannyDotCom. Would be great to throw in the current Ferrari drivers names in a future update :-)

Would love to see some of the other F1 teams next?

Matthew Allington
Thank you! :) The next one I have in mind will be based on Team Lotus, as I've had a soft spot for the Lotus marque from a young age and they do have some IndyCar history.
Upvote 0 Downvote
Great job, love it! The retro design is a favourite of mine, looks fantastic!

Matthew Allington
Thank you! :)
Upvote 0 Downvote
If only you didn't put any names on the car I might be replacing the drivers with whoever they have right now, like Leclerc/Vettel/Sainz instead of Giovinazzi, Sam Bird instead of Sirotkin, etc.

All in all great work anyway, but since we're at it, can you add the aforementioned drivers in the future? For Sam Bird you might gonna add the WEC AF Corse style livery.....

Matthew Allington
I know right? I happened to start work on it after people on Reddit started nostalgia tripping about Ferrari's last IndyCar effort (the unraced 637) and being aware of Ferrari's previous comments that they'd consider IndyCar and/or LMPs if F1's budget cap went too low, and Ferrari just so happened to make yesterday's announcement whilst I was working on the skin :)
Upvote 0 Downvote
Absolutely beautiful to drive and see on track! Great stuff mate. I hope to see more amazing work from you.