Log in to download, or make sure to confirm your account via email
Overview Updates (3) Reviews (16) History Discussion
Warning
Do not distribute this mod other than this RACE DEPARTMENT, share this forum link. and do not modify this mod without author agreement.


Introduction
For the 1956 season, the much improved 550A/1500RS was introduced. Better known as the '550 RS' in the U.S., it's visually similar to the 550 spyder but the chassis underneath is completely new. The ladder chassis of the old Spyder was gone, It now has a tube frame structure designed to dramatically reduce the torsional flexibility. At the same time, the rear suspension was completely revamped, although still a swing arm design, an anti-roll mechanism was added, improving the grip of the rear end under cornering. Finally, the 4-cam engines performance were significantly enhanced with crankshaft mounted distributors, higher compression, and new Weber carburetors, good for 23 more HP than the original 547 engine.
With a low first for quicker starts, the recently introduced five-speed gearbox was fitted as standard on the 550As.

The body looked much the same at first glance, but, mainly to save weight, the hinged back was dropped in favour of a fixed panel with louvered inspection hatches behind each door. Smaller lighting units, front and rear, and repositioning of the two grilles on the back of the car also acted as handy distinguishing features, whilst closer inspection revealed a more aerodynamic nose profile.


In the second race of the season, the 1,000 km of Nurburgring, S/N 0101 finished first in class and fourth overall, driven by Wolfgang von Trips and Umberto Maglioli.

A few weeks later, a works 550A single-handedly driven for more than 7 hours by Maglioli won the Targa Florio, beating all the Ferrari and Maserati entries, it was Porsche greatest victory to date at the time.

More importantly, the 550A proved that Porsche's concept of small engine in a lightweight car could do much better than class wins, and in fact, on certain tracks these remarkable little cars were more than capable of winning overall.


About sounds
The engine sound has been made by Ensyuya from scratch build completely.

Other sound samples are recorded by Ensyuya from real classic VWs or Kunos original ones.


Polycounts and distance for optimization are about
Equivalent to previously released 550 mod of following.


Damage model function fully works.
550A spyder mod got all functions that should be in this mod. All functions Kunos implemented in AC are working properly.


If you enjoy this mod and would like to support us, please consider a donation: 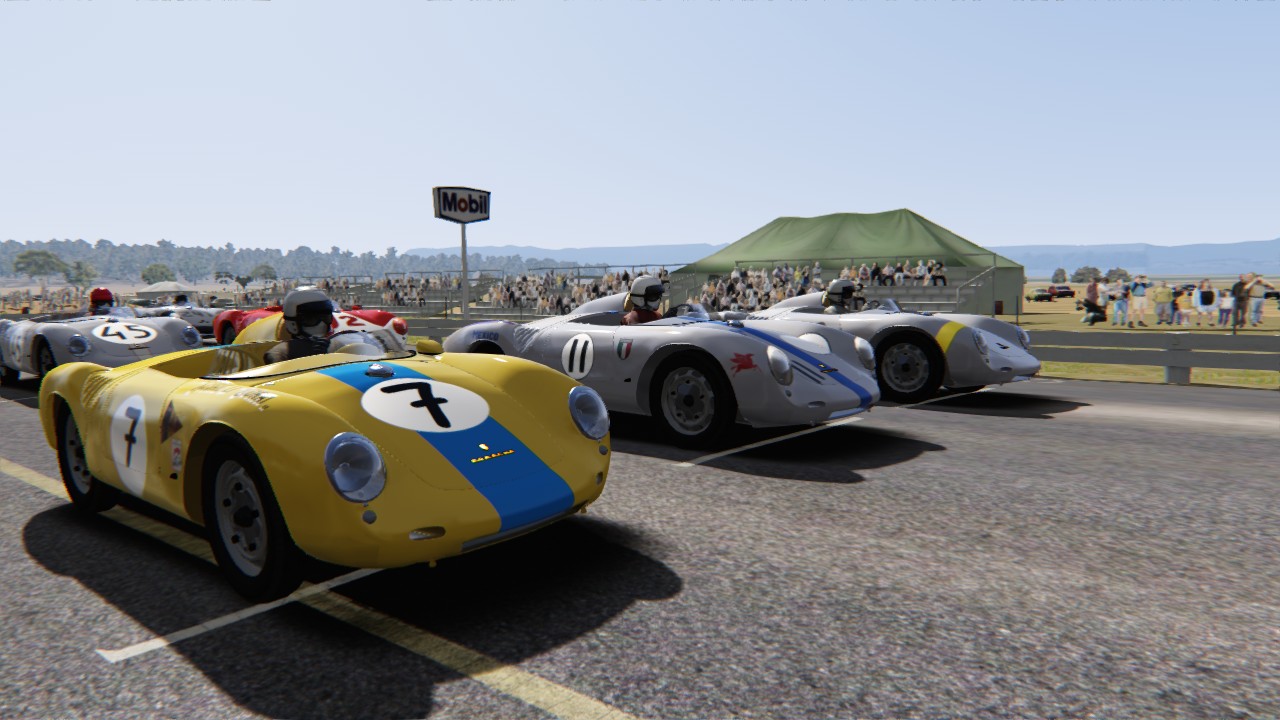 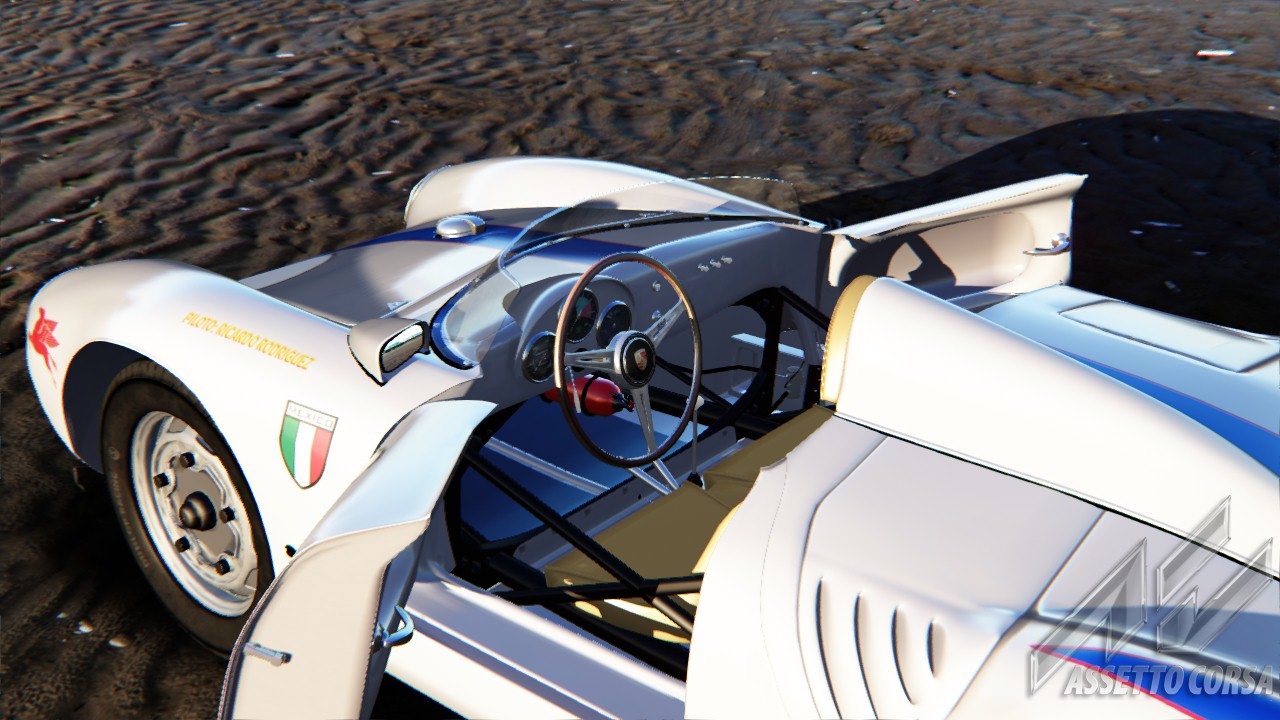 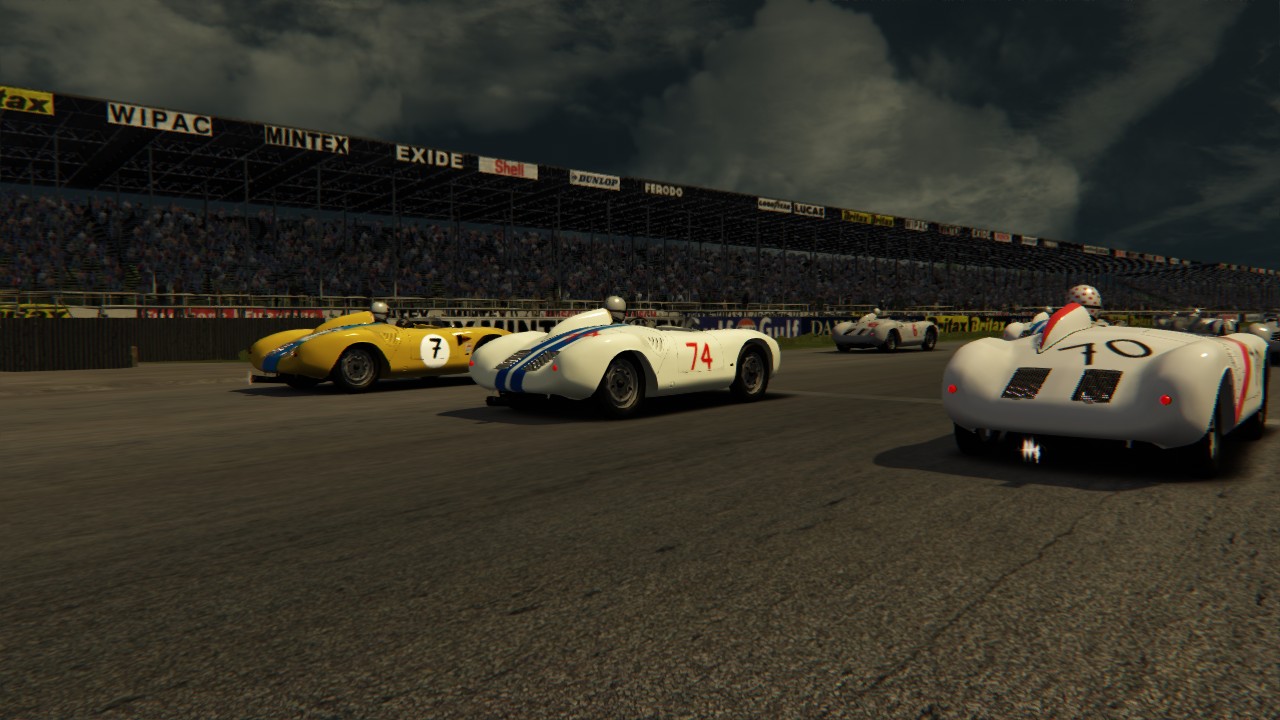 This Car (add-on) is as much fun you can have with your trousers on
A real pleasure !

FFMULT=7.674
STEER_ASSIST=1.000
This car is one of the most fun cars I have ever driven in ANY racing game. The only let-down is the engine sound which really only shines between 5000-7500rpm. But hey, that's where you're supposed to be anyhow, right?

Ensyuya
Thank you for your opinion. It is a sound that was sampled directly from type 547/4 engine and simulated as real as possible.
Great!!! Great job! I need 356 too!

Ensyuya
I do not know when to release it, but I'd like to run 356 A GS Carrera in Assetto Corsa.
Nice to see a more unconventional Porsche mod. It handles amazingly, and is really good.

Ensyuya
I am very honored to say that. I am glad that someone will share fun.
It has some trickiness in it but OMG it's rewarding when you get it right. I had to modify my gas pedal to get as precise as it needed. It feels like you're driving on rubber pizza cutters. It's fantastic!

Ensyuya
Very stylish expression !
I also wanted to say that ;-)
One of my favourite cars. Great job!

Ensyuya
I am really happy to share the pleasures of this little historic car.
Top work in physics and sounds. Very fun to drive, feels fantastic. Thank you.

Ensyuya
I was saved very much in the compliment of that compliment !
Nice, many thanks!
Very , very fun to drive (in Pro , of course)
For my taste , the cars are to shiny (alpha chanel to dark ?)
Nice car and sound very good.
Top mod !
Great mod! Thank you! A little complaint, is that the sound is very strange, like a high rpm vacuum cleaner, the sounds on the other mods you've made are a lot better I think.
Great job on this car! It's such a joy to drive and man, do those gauge faces take me back to Porsche Unleashed...

Really glad you decided to go the extra mile and release it.
I love the car, and you guys did a great job with the model, skins, and physics. I hope you keep working on the engine sound though, because it sounds pretty artificial. I know FMOD is really difficult to work with. Great work!
Car feels and drives fantastic. Very good job. Now is my favorite car. Thanks a lot.
Thanks
Assetto Corsa - Ensyuya - Porsche 550A Spyder 1.0 @Zandvoort(T500RS)(4K DSR)(Cockpit-Cam)
https://www.youtube.com/watch?v=4xupmM74cd4
Assetto Corsa - Ensyuya - Porsche 550A Spyder 1.0 @Zandvoort(T500RS)(4K DSR)(TV-Cam)
https://www.youtube.com/watch?v=UhIN6NKNpp0
the force feedback is a bit weak but in general the car feels and looks great :D thanks for making, love the 550 :D
Read more…
28 comments
Project CARS 3 | Latest Screenshot Previews And Gameplay Mechanic Insights
17 comments
Assetto Corsa Competizione | GT4 Trailers For Audi, Ginetta and Alpine Revealed
17 comments
NASCAR Heat 5 | New Launch Trailer Revealed
11 comments
Automobilista 2 | Online Racing Now At RaceDepartment
33 comments
Wreckfest | Update, Free Tracks, Stability Improvements And More!