Log in to download, or make sure to confirm your account via email
Overview Updates (5) Reviews (35) History Discussion
Warning
Do not distribute this mod other than this RACE DEPARTMENT, share this forum link. and do not modify this mod without author agreement.

Porsche 550 spyder v2.0 updated Sep 15, 2016
550 body panels have been completed again and they were reborn. Rear cowl, doors around, and front fenders around were improved. Moreover I achieved to reduce 45000 polygons manually in this work.
I'm reviewing the shape, size, location, and angle of dash knobs, headlights, turnsignals, taillights, and so on.
To suit the cockpit for new body panel at that time. Bottoms of doors are raised, so I had to manage to adjust cockpit too. Working with the cockpit earned about 10000 polygons in the end.
Annoying bug at the rear cowl, the shape is wrong, big mistake, I fixed it.
Many parts of the 550 mod are revamped. 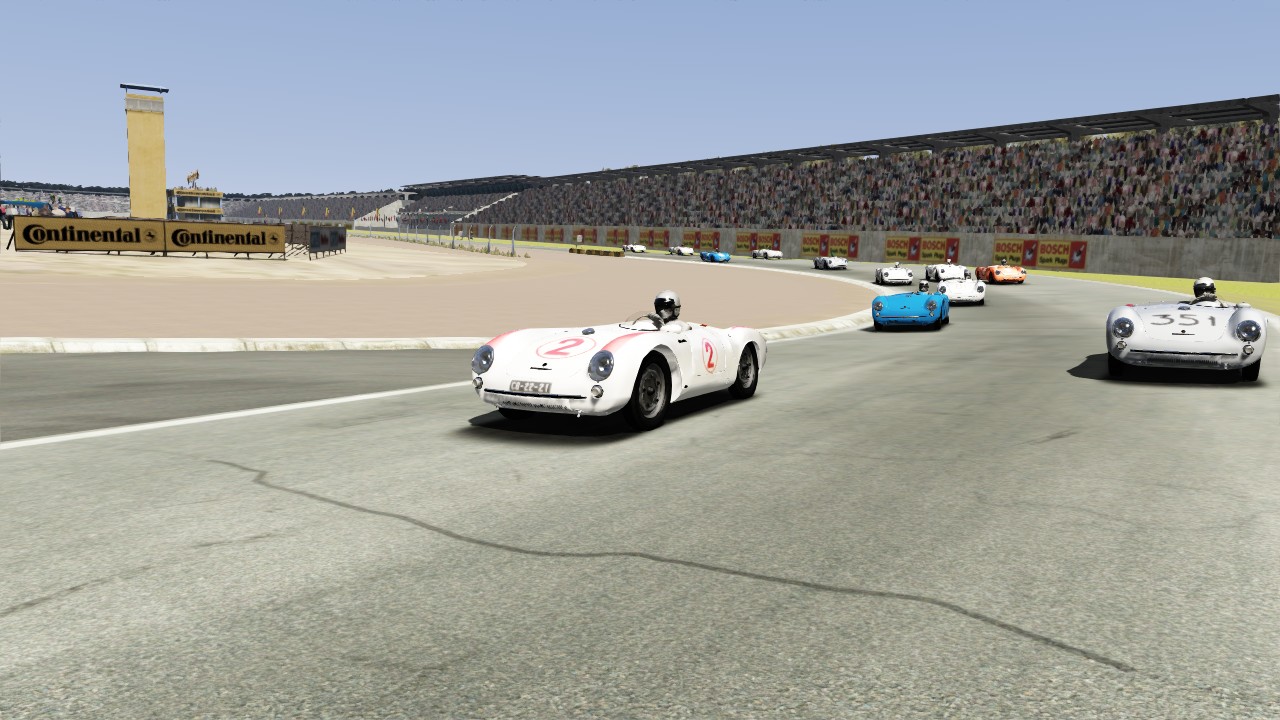 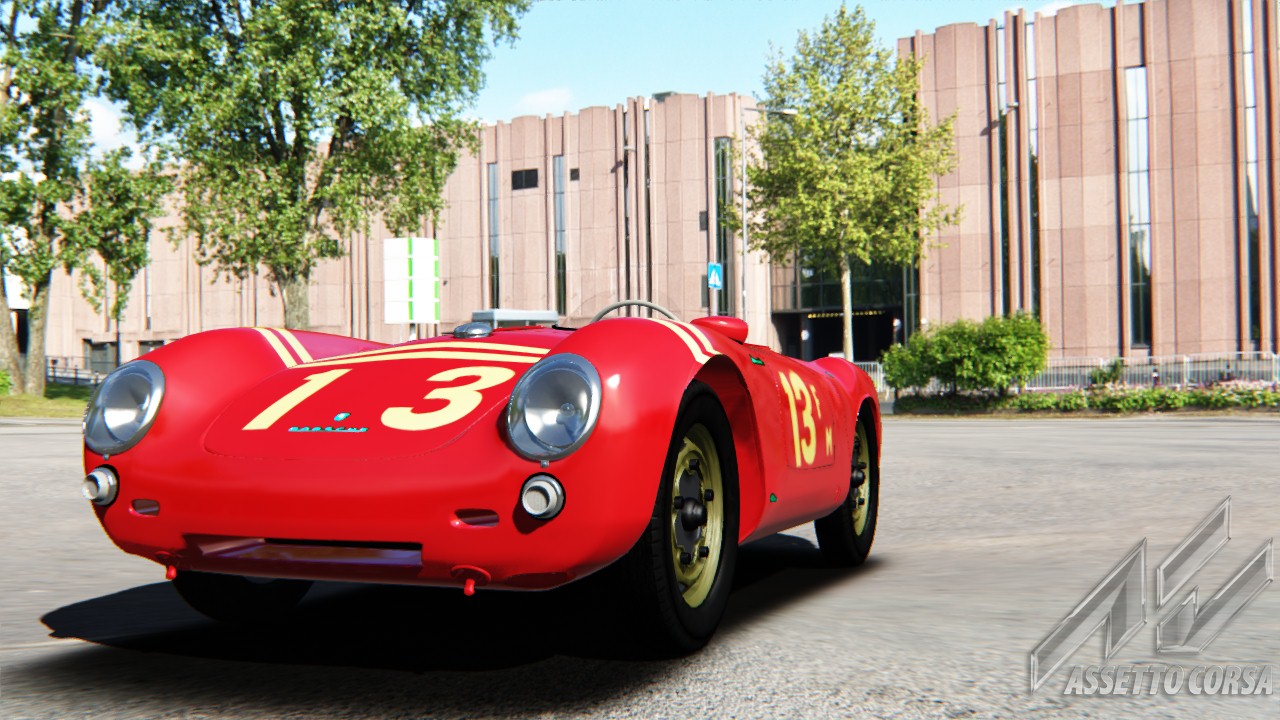 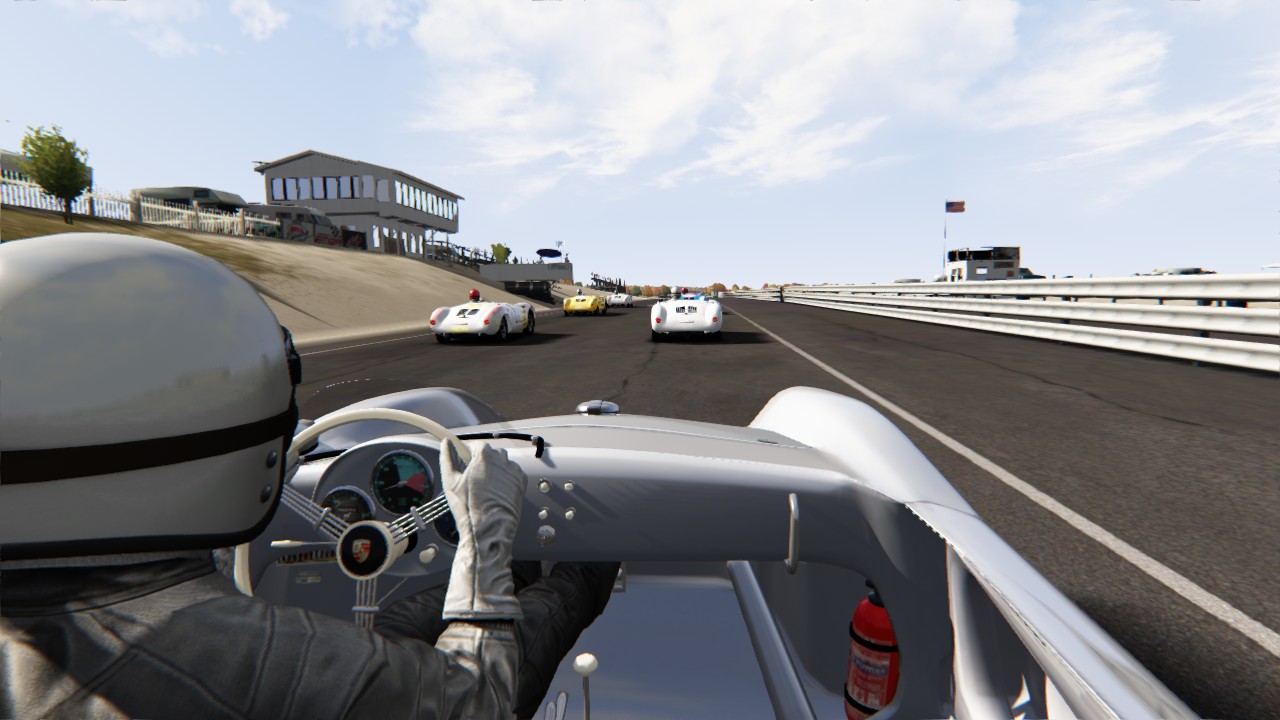 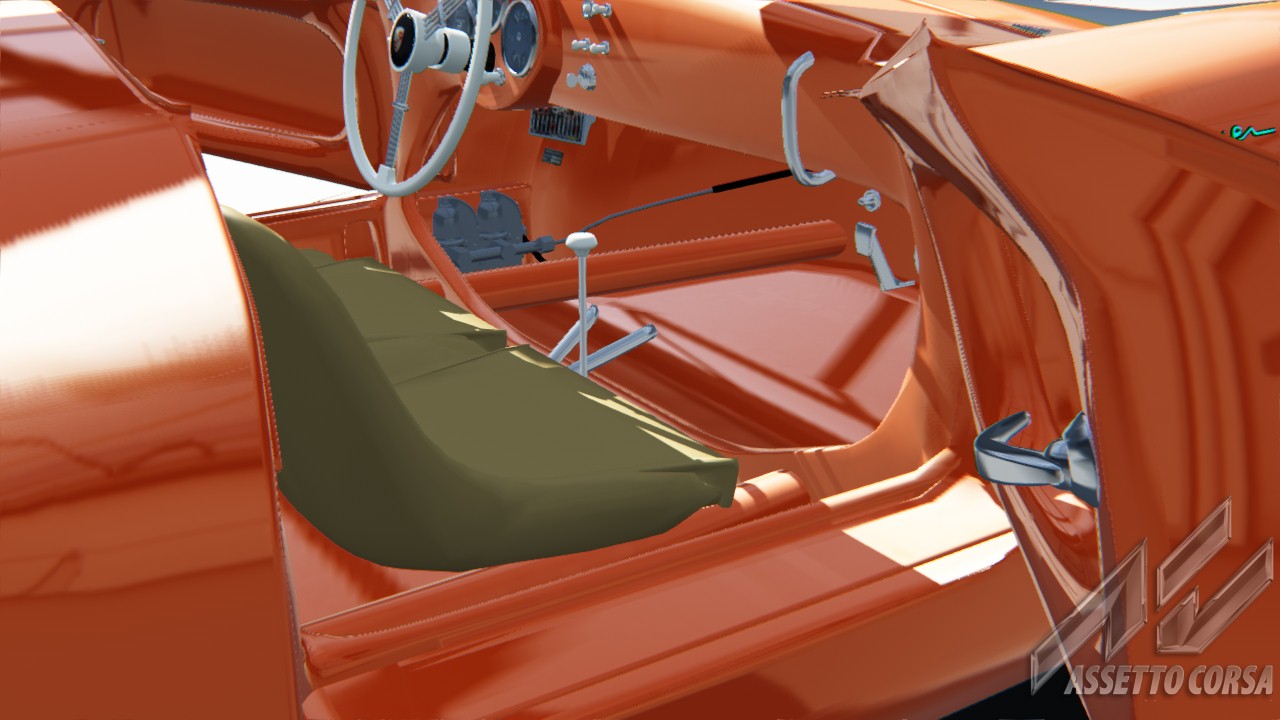 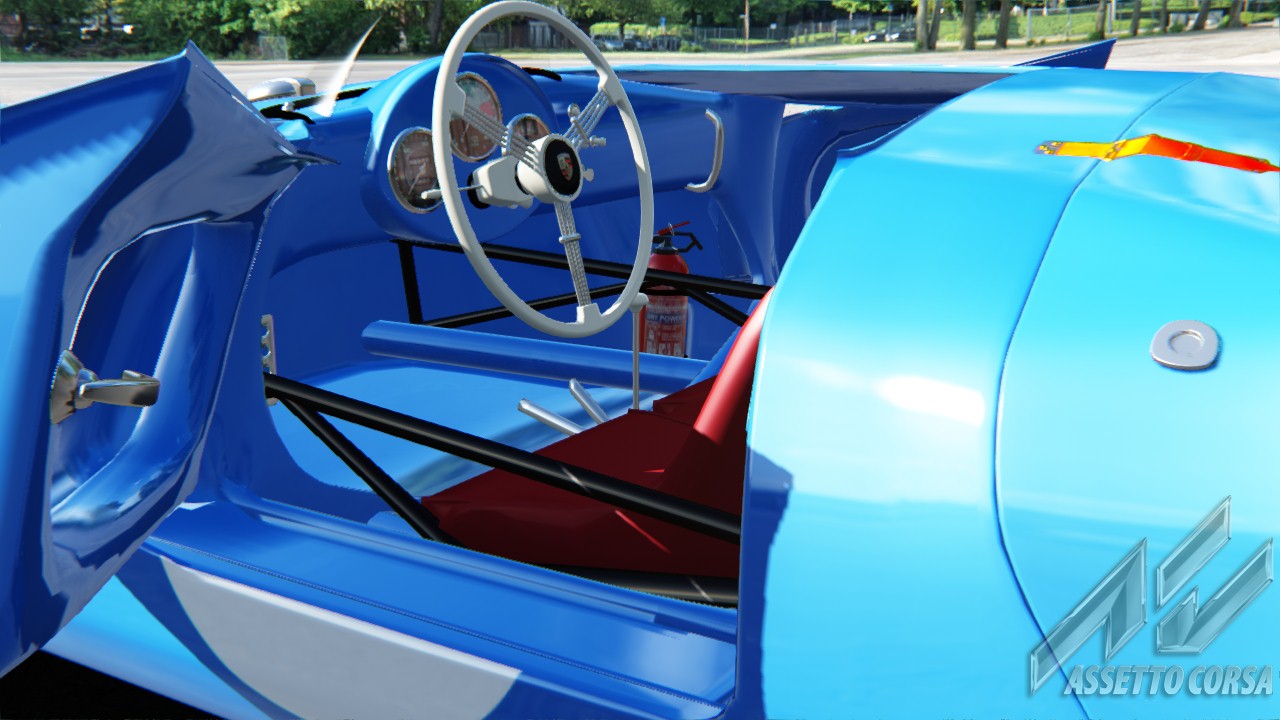 
Porsche 550 physics background
The 550 was basically the first ever mid-engine road car, so its design is not perfect. Suspension was all based on VW parts. Front was the double torsion bars (a Porsche patent) and rear was a basic swing axle - both causing horrible camber change under cornering. On top of that, the frame was weak and twisted a lot. It has drum brakes and 50's tires less than 100mm (4'') wide.
However, aerodynamics was very sleek. Weight and inertia are extremely low (under 600kg) and the 4-cam 547 engine was way ahead of its time, revving easily up to 7500 rpm. It would be Porsche's race department workhorse for an entire decade.


Overall the car has good handling for its time, but it was notoriously oversteering . Many period pictures show 550's in oversteer.
Ken Miles (aka "Spyderman") said: "Steering the 550 was very much a matter of very large steering movement to produce the desired result",
He also mentioned this about the 550 vs 550A (not in the mod currently) “The change in handling is unbelievable. Gone was the excessive oversteer (of the original 550), the RS (550A) was now as forgiving a car as one could possibly wish to meet."

Engine sound sources of base model except idling sound : Citytea

Special thanks to "Toonces" for sharing his hands-on experience and notes on the real 550.


About sounds
In base model of this Porsche 550 mod, the engine sound sources are from real type 547 engine that Citytea recorded around 2006 at Salzburgring with his old Boss R-1 digital-recorder. He gave us permission to use with pleasure.

Otherwise, the engine sound of S1 upgrade model has been made by Ensyuya from scratch build completely.

Other sound samples are recorded by Ensyuya from real classic VWs or Kunos original ones.

Damage model function fully works
550 spyder mod got all functions that should be in this mod. All functions Kunos implemented in AC are working properly.

I tried to measure the PC system performance hit of 550/1500 RS Spyder mod, because the development of basic part of this mod has been completed all. I used the official Alfa Romeo GTA for comparison as the benchmark. Generally results are not so bad for this mod. The load of this mod to the system is about 30% heavier than the Alfa Romeo GTA.

System specification of my PC

smoke in mirrors Off

Single-make grid (Opponents will use the same car as you)

Warning CPU Occupancy > 99% = once for a moment

Warning CPU Occupancy > 99% = once for a moment


If you enjoy this mod and would like to support us, please consider a donation:

Great little car to drive. Handling and sounds are awesome! Thank you for this excellent mod.
Excelent work. Many thanks.
The (only) thing i dont like is the Brite white steering wheel. like the made of wood from the 550A better. but it is still a nice add-on.
The only mod that has a soul. Thank you
good job!! James Dean car!
Love this car thank you
Excelent car! The feeling is amezing!
Very good, perfect 3 model, awesome physics.
Great job!
very good
The 3D model and cockpit aren't really a looker, but the suspension feels very believable (and AWEsome!), fantastic work on that! So far I would round 4.5 up to 5 stars, weren't it for the tires. I know you got clues from the Maseratis; maybe get some more clues from the upcoming Kunos Porsche 718 and mix that into your current tire data ...and also review the temperatures, then you'll get the full 5 stars from me. It's very fun to drive already though, thank you for that!
Thanks for update the sounds of this wanderful mod. The physics are amezing, lot of fun driving it.
Thanks
Assetto Corsa - Ensyuya - Porsche 550 Spyder 2.3 @Nurburgring Sprint(T500RS)(4K DSR)(Cockpit-Cam)
https://www.youtube.com/watch?v=HkINUiwCWm8
Assetto Corsa - Ensyuya - Porsche 550 Spyder 2.3 @Nurburgring Sprint(T500RS)(4K DSR)(TV-Cam)
https://www.youtube.com/watch?v=sm4PnHngSOc
Great job, fantastic Mod. Thank you very much.
Very good improvement! You can drive this wonderful car on Bridgehampton (TIKAL SPORT).
Great car! I will be driving this Porsche in the meantime before the Porsche pack is released. Thanks!
Yesterday I tried it for the first time and have to say that I love this little car. Alas, my love is not completely requited - apparently the S1 version hates me and even tried to kill me. The basic car is great fun to drive. The S1 is an excellent choice for those who love carousels and a merry-go-rounds.
Excellent work!
One of the best Mods out there!, period!
Many thanks!
This is currently the BEST vintage car for Assetto Corsa.

It's really tricky to drive, it moves all over the track and VERY careful throttle usage is neeed to corner well. What a stellar mod!
Really nicely made car, awesome sound (no idea if it is genuine). Very addictive drive.
Awesome update, it is just right and very entertaining. I also found it drivable, standard is not hard to handle at all. You people who were rude enough to give 3 or even 2 stars just because YOU couldn't handle it, those stars are for your skill and knowledge of driving such car. It is not GT3, where you can be flat out most of time. This is great mod, sounds good, drives well, and model is nice. Definitely worth to add to the garage.
I'm so glad that you upgraded this already beloved sweety. With v10 rubbers, it got more life.

Guys!
If you you don't like vintage cars, that isn't railcar-like, as the modern supercars with its sillyproof TC, don't rate down a mod for this reason! Rating is for the mod, not for the real car!