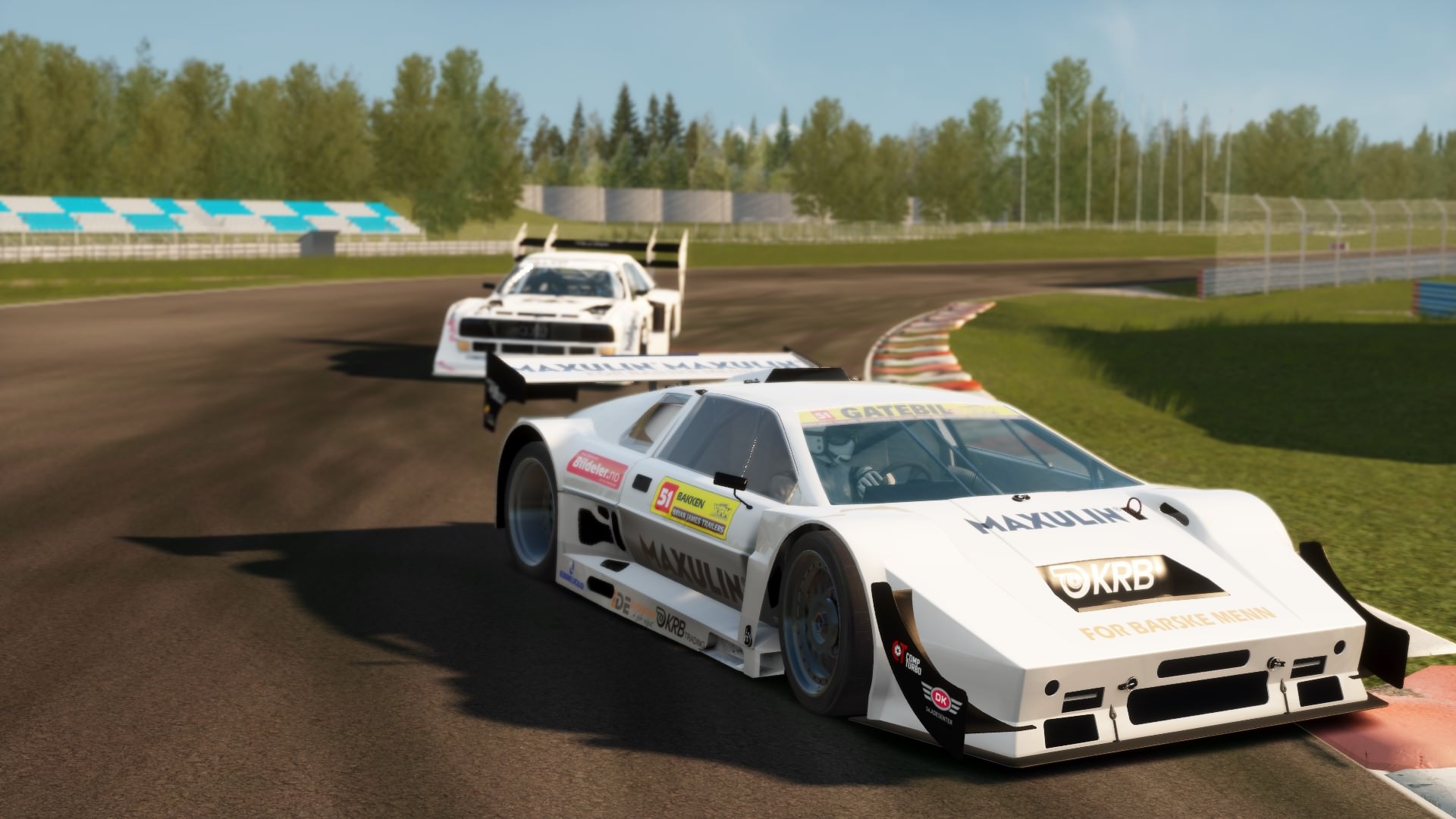 
... and here is the other one. The Lotus Esprit from team KRB Trading, another Gatebil regular and monster from viking lands.
While the Audi was a true garage build, this car has a different origin. It started life as a Group-C C2 class car from Tiga, which was crashed, then bought and shipped to Sweden, where a tuner/maniac rebuild it and draped it in Lotus Esprit like bodywork, because why not. With a peaky Nascar V8 it ran in some national championships, switched hands a few times, before KRB Trading got its hands on it. 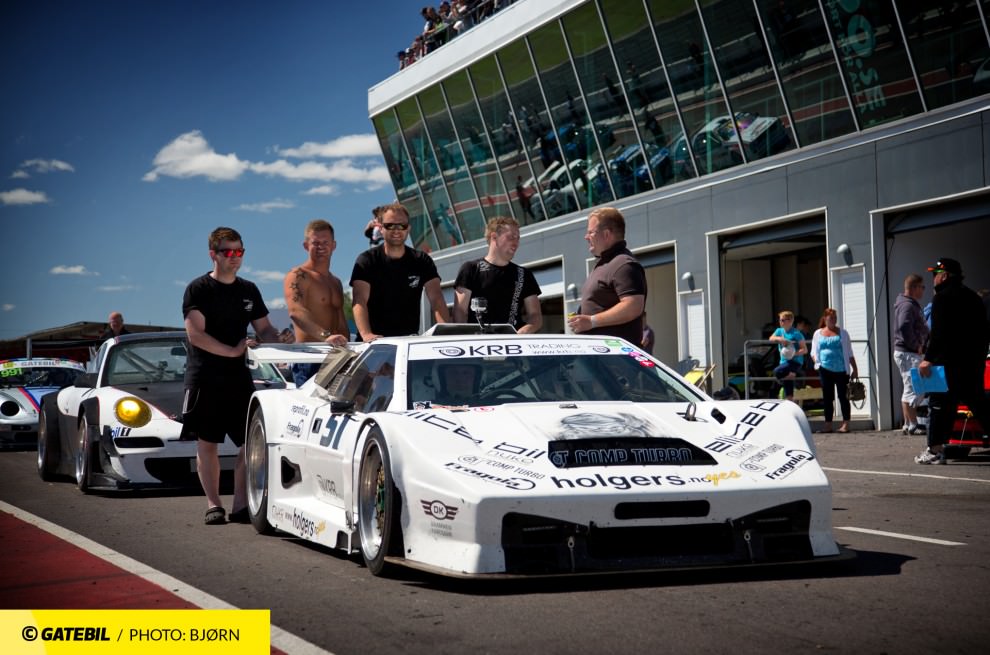 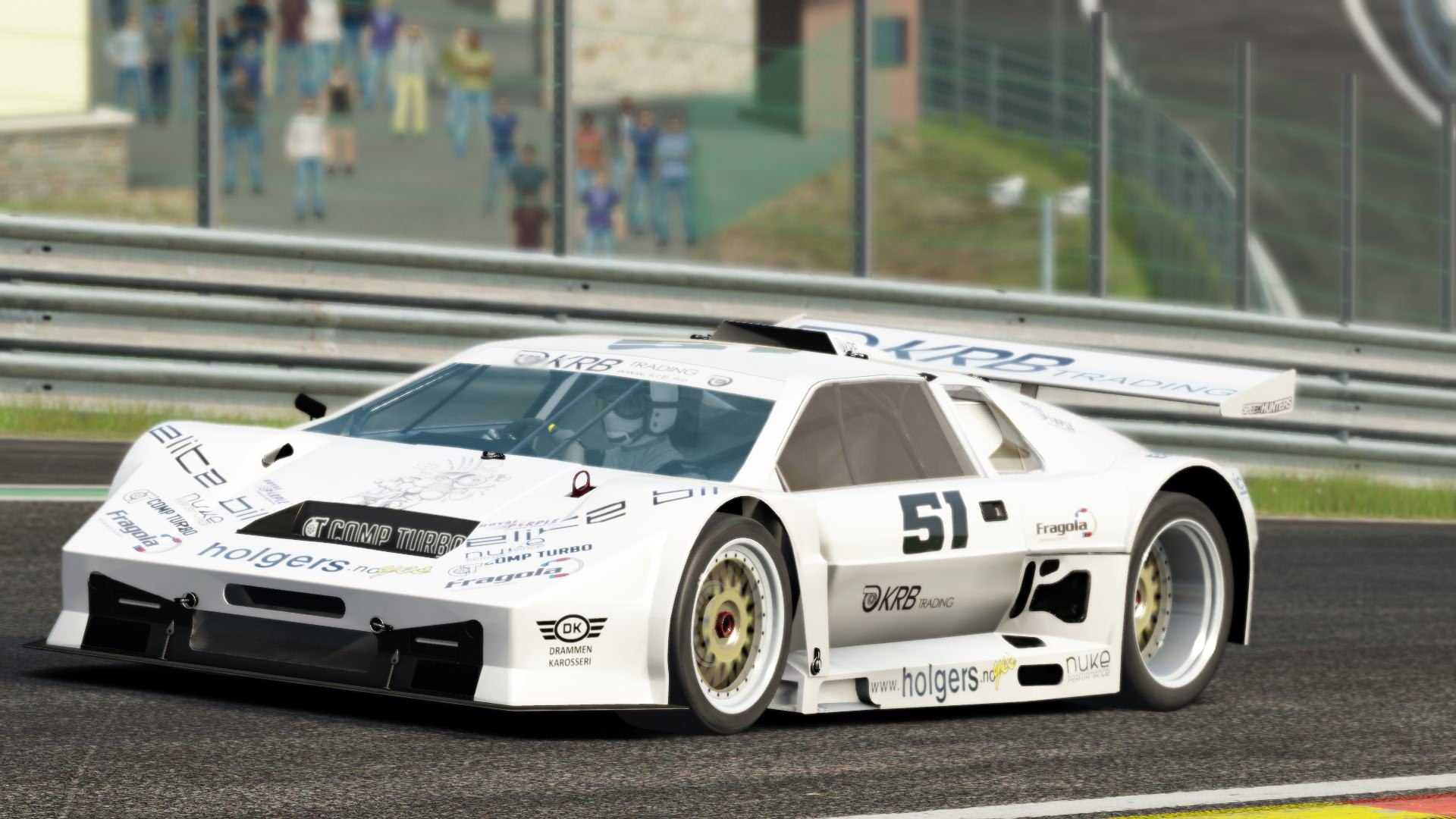 This mod is the same deal as the Audi, I tried to replicate the car as best as I could do, which was made a lot easier when I established contact with the team.

It comes with seven skins, three real life replicas of the cars at various stages (basically from both Speedhunters articles again plus how it looks during this 2018 season) and 4 additional liveries, among it a replica of the BPR GT1 Esprit (with restrictor you can drive this car among the RSS GT1 field... a lot of restrictor..)

Special thanks to:
Team KRB Trading (the man Kai Roger himself) for the nice communication via facebook. What an enthusiastic bloke 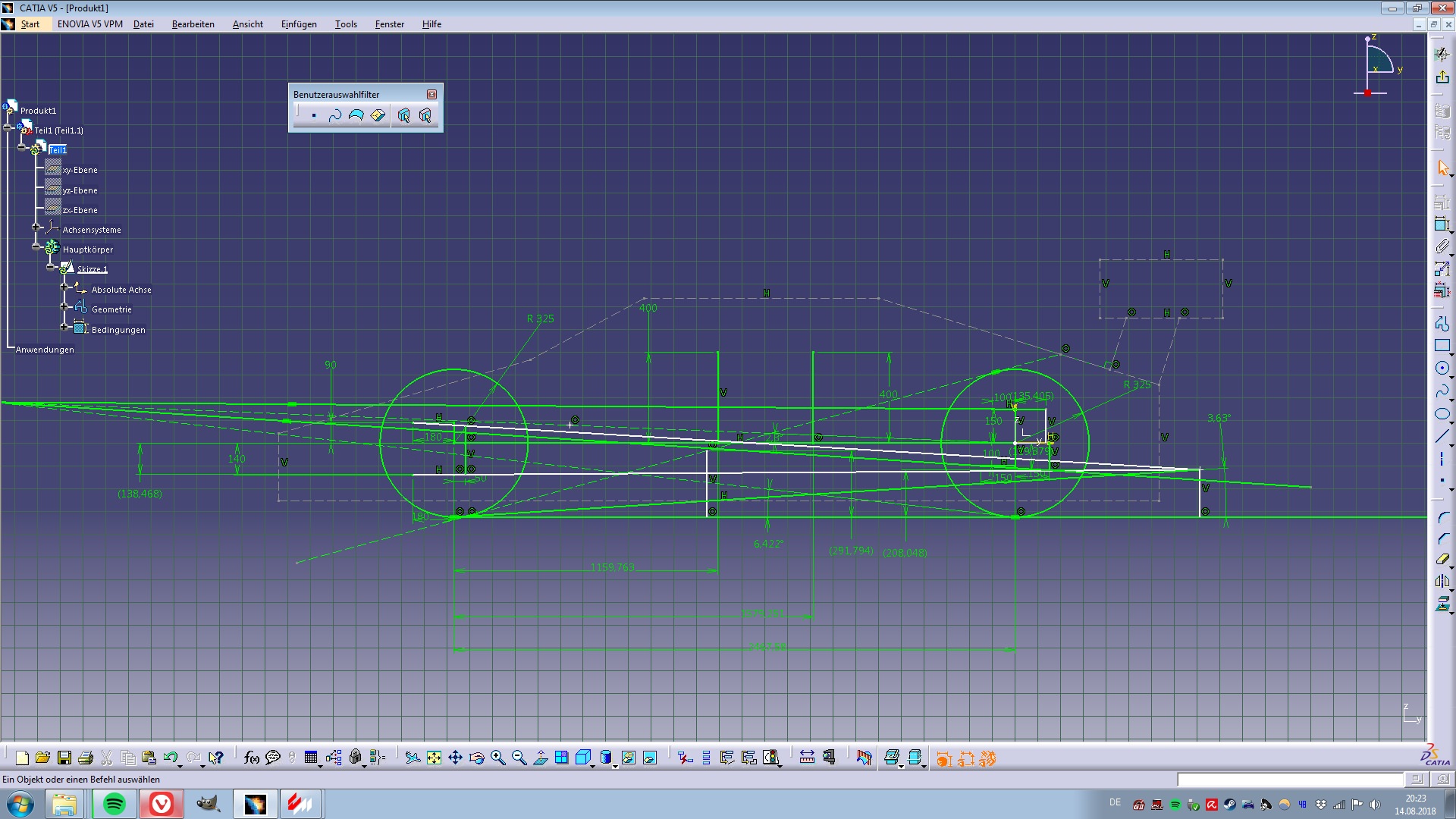 Possible questions:
- when I open the car in Content Manager it shows that the collider is oriented wrong
= yes, it does appear wrong. But that is due to something Blender does weird with fbx conversion (global vs. local coordinates), it does work fine ingame. Same issue with all my cars 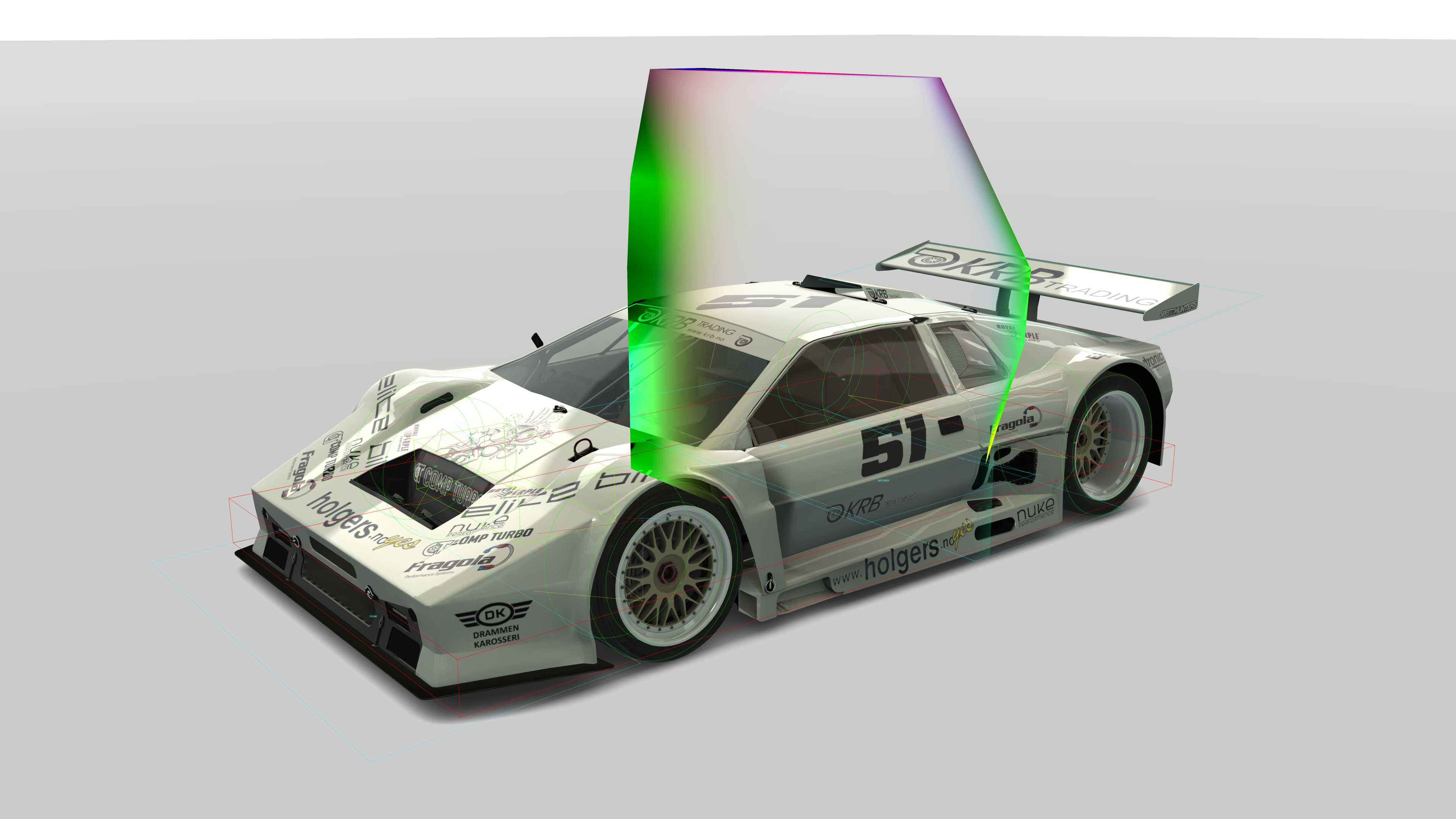 - I want a fully adjustable transmission
= real car does not have it
- My turbo is broken, shows only half boost
= the car has "boost by gear", and according to builder info the controller only allows full boost in 5th and 6th
- Traction control does not work
= it has no traction control, the boost controller was installed for this purpose
- It has no dirt and scratches and rattling parts
= no, it does not.. I may do this for an update, but it's pretty low priority for me
Used tools:
Blender 2.77
Gimp 2.6.11
Excel
Dassault CATIA V5
DXTBmp

If you still like my cars you can buy me a beer (or finance a replacement for my 8 year old CPU..)

AccAkut
Hmm no idea what can cause those issues, the sound was made by a really experienced guy, but it uses many channels... maybe you set AC to use too few channels overall?
Upvote 0 Downvote
I somehow managed to miss the release of this car last year, no idea how but its really fantastic, really cool to see how much you have improved since the Alzen came out years ago.
Upvote 0 Downvote
Gracias y gran trabajo ¡¡¡¡¡
Upvote 0 Downvote
Very nice work, makes a lot of fun to drive. Thank you!
Upvote 0 Downvote
This car is powerful!!! :D

Great skins, awesome sounds, nice handling, good physics, interiors are also good, although they could be improved a little bit more, I think.

Thanks for your efforts, and thank you also for sharing it with us "car lovers"!
Upvote 0 Downvote
To anybody searching around for a super high quality mod that is a bit different...you found it! An absolute stunner. Bravo!
Upvote 0 Downvote
excellent update! i have input latence with onboard dash board when i shift do you know why ? thanks

AccAkut
The latency is on purpose, it was pointed out to me that the connection between the dash and the transmission sensor/controller was very slow for some reason, meaning you'd need to be careful with your shifting and not 100% rely on the display
Upvote 0 Downvote
Great fun car, bonkers but brilliant
Upvote 0 Downvote
Great car, handles like a dream, monstrous power-plant, and that sound... Hmmmm..