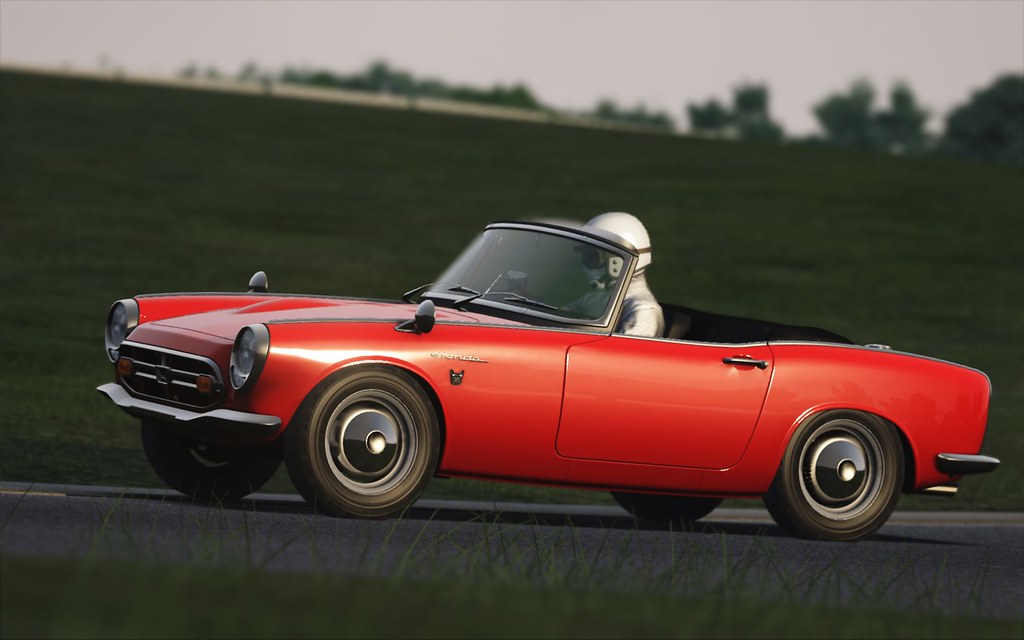 Just go ahead and enjoy the ride!
Check out the WIP thread for future development updates, RSC version and more:
http://www.racedepartment.com/threads/wip-honda-s800-stock-and-rsc.122812/

Things left to do for the final version:
- Fix driver shift animation
- Proper sounds
- Get feedback on physics from a real owner (if possible!)
- Make the coupe model
Reactions: KAVACHI, jpkirchen, Cote Dazur and 48 others

I drove the S600 back in the late '60's. This is so close to being the same. Just love it. Thank you for sharing.
Excellent job, love the car, however, maybe it's just me, but there's no headlight lenses in the KN5? I did upgrade the shaders patch to the new version 1.61 after running 1.41 or whatever Peter Bose recommended with the newest SOL. I'll post a screenshot.
Thanks
Had this car mod for a long time and it was always beautiful and cute, but now with new physics it's a whole new world! It is so rewarding when you get everything right behind the wheel=)
My tribute: https://youtu.be/hnRYddC_nCo
I have to be a bit more critic this time unfortunately :( but I very much still love this little pest :D

- [Shaders Patch] the exhaust smoke is a neat little addition, but the values are a bit over-exaggerated in my opinion. Doing something more in line with the KS Abarth 595 seems better to me overall;
- [Camera] the bumper (or bonnet?) camera is off, you look through the car with it;
- [Model] there are no LODs. Wouldn't be that much of an issue, but the previous version had them so it kind of detracts from this update :( :(
- [Visuals] the steering wheel would need some refinement, it is still very blocky and the wooden texture could be improved;
- [Skins] there is a 'some other yellow' skin, which was labelled as simply 'yellow' previously (differently from 'bright_yellow' which is not 'yellow' on 2.0) and the 'silvergrey' skin should be labelled 'silvergrau' (silver_grey and silvergrau, now they have the same name basically); I know, first world problem, it's just that they were labelled correctly before and now they don't.

Physics are great as expected. I would object that the previous were probably more fun BUT if these are more realistic, as I suspect, than I am prefectly fine with it. All in all, still an awesome car :)

A3DR
Thanks for the input! some things have been explained in the discussion thread, others would be more helpful to have them over there so if I decide to make another update, we can have them all in one place.
Thx for updating the wonderful car again
Car physics are much better now, but as I cycled through car cameras I noticed the bonnet camera was incomplete...
I love it
Super!!
excellent details
0k Gracias ;)
Gorgeous.
Dropped a note about the driver arms in the support thread.
Le doy 5 estrellas porque no puedo más. Mod espectacular. Must.
Beautiful little car, looks very well in VR, got a ride in my neighbours Triumph Spitfire last year reminds me of that,well done
5 Stars are simply not enough- This little thing feels and looks so great!
Wow! Creepy realistic! Amazing job!
Amazing drive!! Sure, the model might look a bit aged in points compared to A3DR latest creations and the torque curve looks odd (not sure it is correct), but it still is a solid 9/10 and the physics are amazing! Beautiful car, tons of fun around the Nordschleife.
thanks for the beautiful car!
three words: W, O, W.
if i could rate six stars i would
This is awesome. 9k rpm in this little car, at these speeds, just awesome. The mod is great too. 5 stars
Well done model
The best car so far with attention to details.Please continue gives us more cars.great work guys.Love it.
I love this car. It is so much fun to drive and the attention to detail is really nice.
tiny car - big result. excellent mod work!
Made by A3DR = Quality guaranteed. :D
Thanks a lot!
Read more…
74 comments
Project CARS 3 | 'What Drives You' Trailer Released
49 comments
Community Question | Keeping Your Cool In Sim Racing
35 comments
F1 | Nico Hulkenberg: Good, Bad Or Indifferent?
51 comments
Formula One British Grand Prix | Driver of the Day: Vote Now
77 comments
2020 Formula One British Grand Prix